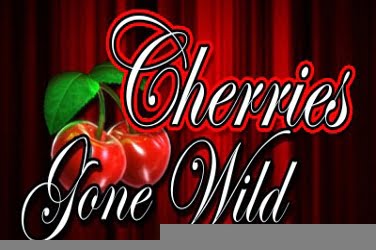 Released in September 2014 this Microgaming with Bluberi creation has a traditional look that may leave players thinking of the classic Fruit themed slots of the 1980’s. just like a classic 3-reeled slots. A deeply colored red curtain is all that can be seen in the background while the 5 reels are separated and framed in gold. It gives the game an elegant feel as the sound effects will make players believe that they are in the middle of a busy casino.

The designers haven’t been very creative with this format but it is still proving popular with beginners as there are few distractions from the base game. They have however included a Wild which can become stacked and 10x Free Spins to add to the players chances of creating any of the games 30 winning pay lines.

A selection of a Watermelon, a Plum and an Orange are the 3 lowest paying symbols in the Cherries Gone Wild slots game. Players can also find a framed “Bar” and a Gold Bell symbol across the games 5 reels which also reward them with a cash amount when included in a winning combination.

Further symbols include large “7”s and if the player is lucky enough for 5x of these to land they can see their jackpot amount grow even higher. The Green 7 adds 200x coins, the Blue 250x and an impressive 300x coins will be added to the players balance if 5x Red 7’s appear.

However the largest jackpot of 500x the player’s stake is awarded if 5x Cherries Gone Wild symbol are found during play. And although they may not appear often this feature can provide players with a big win especially if they are wagering the maximum amount.

Wild – here the designers have used Cherries as their “Wild” symbol and if this lands players can benefit from more chances to create a win. Not only can it change any Basic Symbol if a pay line can be found it can also appear stacked upon the reels to allow further opportunities for players to add to their jackpot balance.

Scatter – a simple “Free Spins” symbol is used here but players can only find it on the 2nd, 3rd, or 4th reel. However if 3 or more are found during any spin the games Bonus Feature will be activated.

Free Spins – these come into play when 3 or more Scatter symbols appear across the central reels. Now the player can take advantage of 10x Free Spins and during this Bonus Round more Cherries “Wilds” are added to the reels.

Unfortunately this Bonus Feature can’t be re-triggered and it is the only one that the Microgaming designers have included in the games format. Something which may prove unappealing to those players who prefer more of a thrill when visiting their online slots games.

The denomination used in the game is set between 0.01 to 0.25 and a maximum of 20 coins can be placed on each of the 30 structured pay lines. This means that up to 150.00 can be wagered with each spin in this online slots which makes it appealing to both high and low rollers.

Once the stake is decided upon, then the player can hit the Spin button and sit back to see if any winning combinations can be found across the games 5 reels. Matching symbols need to begin from the furthest reel to the left but the pay outs are rather low in comparison to other slots games that are available from Microgaming online casinos.

Despite the games title there isn’t much “Wild” activity going on with these Cherries as there is only 1 Bonus Feature included in its format. And although extra Wilds are added to the reels during the Free Spins Round players get just 10x chances to increase on their initial wager.

This and the fact that there is no Progressive Jackpot, Gamble Feature, Mini-Games or Multipliers means that this may not be for regulars and those who prefer more of a thrill during play. However for beginners and players that enjoy a slower paced game this could prove to be the ideal option.

Despite its uninventive design the Cherries Gone Wild slots game still provides a RTP of 95.40% which has been enticing players from around the globe since it was added to the numerous Microgaming online casinos. 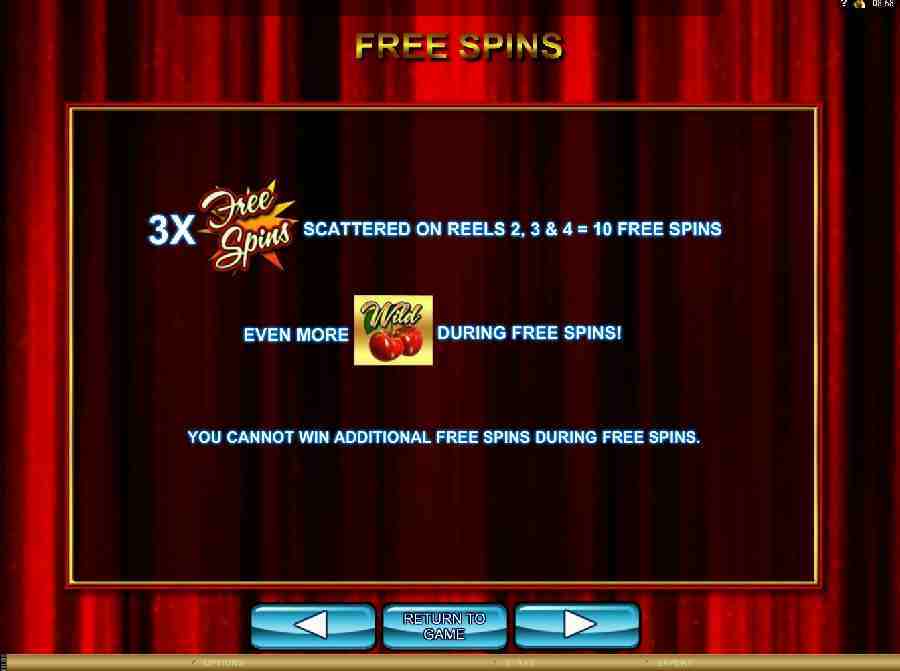 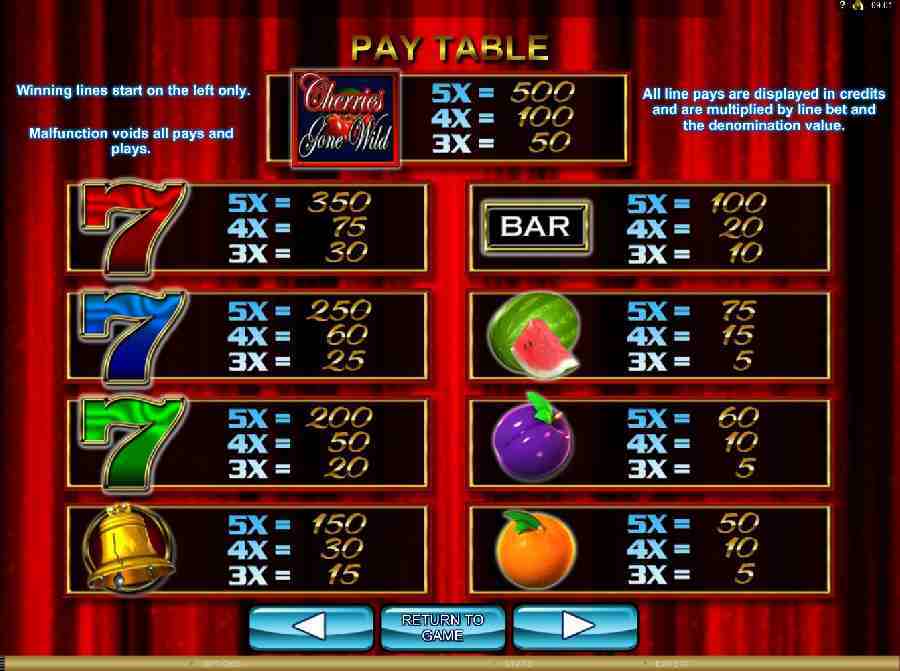 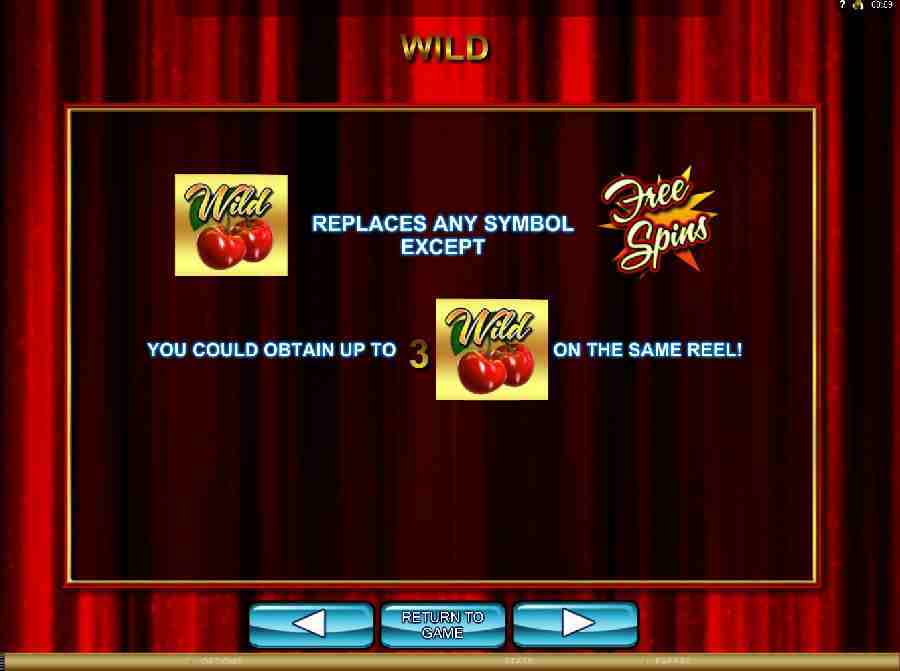 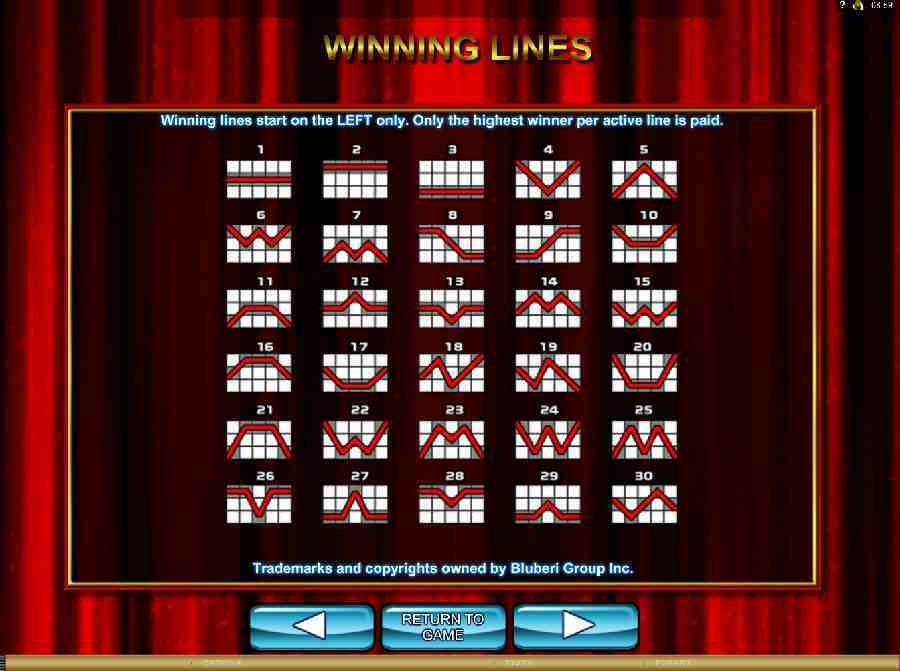 Cherries Gone Wild is a  five reel, thirty payline, and six hundred chip slot machine from microgaming. It has a Fruit Machine theme. The game features a wild symbol, A Free Spins bonus game, with a maximum jackpot win of $2500