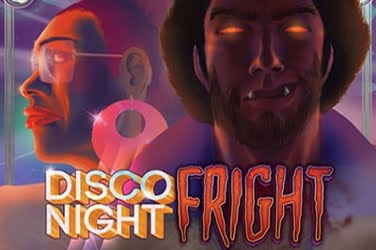 As the title suggests there is a Disco theme to this slots game, however microgaming have given it an unusual twist by bringing Werewolves into the format. The games 5 reels are set within a spot-lit speaker but the graphics used are quite poor in comparison to other online slots. Players may also find the music that can be heard rather dull considering the games theme. However there is the opportunity to lower the volume or even turn this feature off through the Settings Menu.

There are 243 different winning combinations in this slots game which are paid from Left to Right. And although it may have a rather basic game-play the Bonus Features are still proving appealing to many who enjoy online casinos.

Released in April 2013 microgaming have taken a fun theme and given it a scary element to ensure that the Disco Night Fright slots game is popular with a wide range of players from around the globe.

In a striking white with a different colored background for each are the 9 through to Ace symbols. These are the lowest paying symbols in the game but they will add coins to the player’s final balance.

Other symbols include the Disco Floor, a lady’s Cleavage, and a Dancing Woman. However it is the Male Dancer wearing his sunglasses who provides players with the highest jackpot in the base game. When 5x of this symbol are spun onto the reels the player will receive 1500 coins which is then added to their initial wager.

Wild – this is shown as a lit Disco Ball and is able to change other symbols on the screen besides the Scatter.

Scatter – the games Logo is the Scatter symbol and rewards players with the 2nd highest pay out amount in this Bonus Feature. Here players are given a set coin balance depending on how many Scatters were revealed.

At this point in the game players can take advantage of the Disco Werewolf Free Spins Bonus Round. The screen turns black and is dripped in blood while any Dancers symbols that are on the reels are turned into Werewolves. Now players can receive an additional cash prize if 3 or more are shown.

In addition to this players will be awarded with 10x Free Spins which can be retriggered at any time during this Bonus Round. So there are plenty of chances for players to increase their final pay out amount in the Disco Night Fright slots game.

Unfortunately there is little else to keep players entertained during the game. Some players may find it disappointing to discover that there is no Progressive Jackpot or a Gamble Feature to provide an additional thrill. Nor does it have any Multipliers or Mini-Games to add to the fun of this slots release.

Genesis Gaming have kept the coin denomination low in this latest release. Players can place wagers using coins from 0.01 to 0.10 on any of the 243 winning combinations that are hidden upon the games 5 reels. With a 10x coin maximum set this means that the players are able to bet with 25 to 250 coins determined by how many paylines they wish to have in play and their budget.

There is a Wild and a Scatter Bonus symbol included in the Disco Night Fright slots game that offer players more opportunities to add to their initial staked amount. The Wild is able to change other symbols to create more paying combinations. While the Scatter not only rewards players with a cash prize but if 3 or more are found then the Disco Werewolf Free Spins Bonus Round will be activated.

Although there are no other Bonus Features included in this slots games format it has become popular with beginners and players who enjoy its slower pace. However the fact that is boasts a RTP of 95.36% makes it attractive for players who want to access the 243 different ways to win while taking in the Disco theme.

Should players choose there is the option to select Auto Play during the game. This means that the reels can be set automatically for a certain amount of times or until the highest wager is reached. It is a Feature which may prove useful to those who need to be less interactive with the Genesis Gaming software. 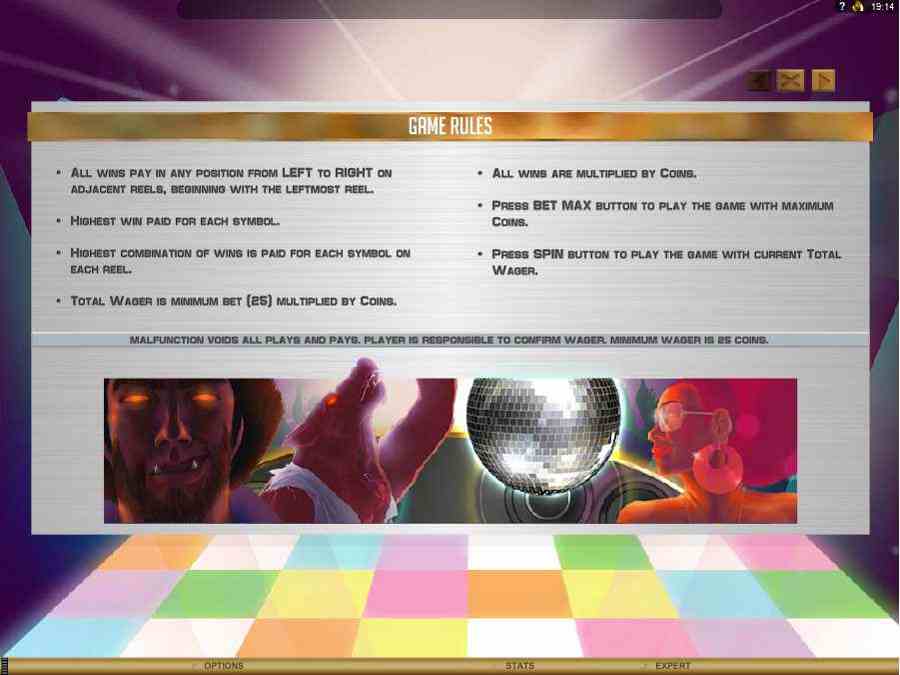 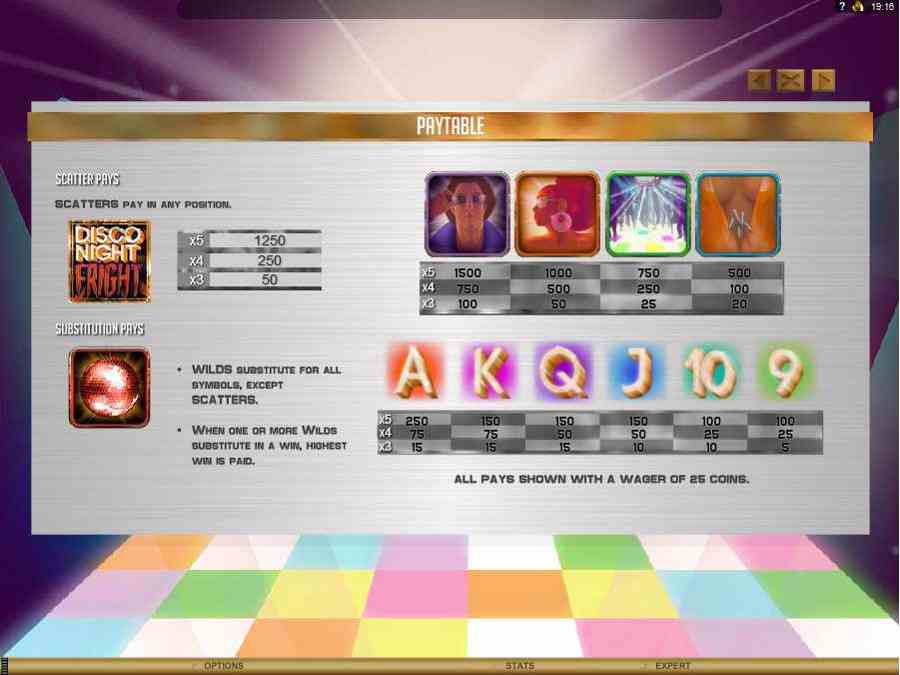 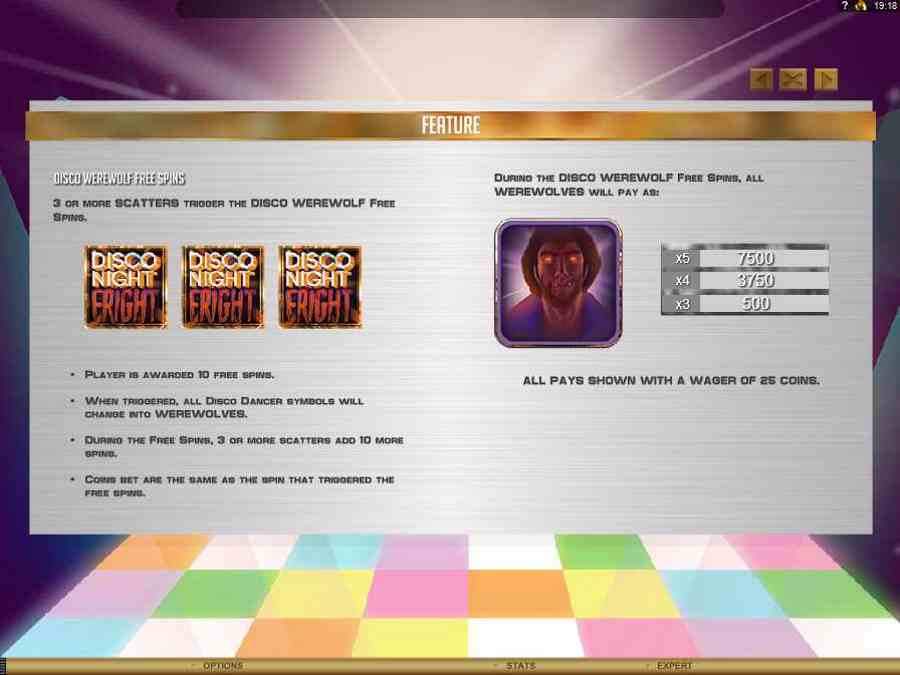 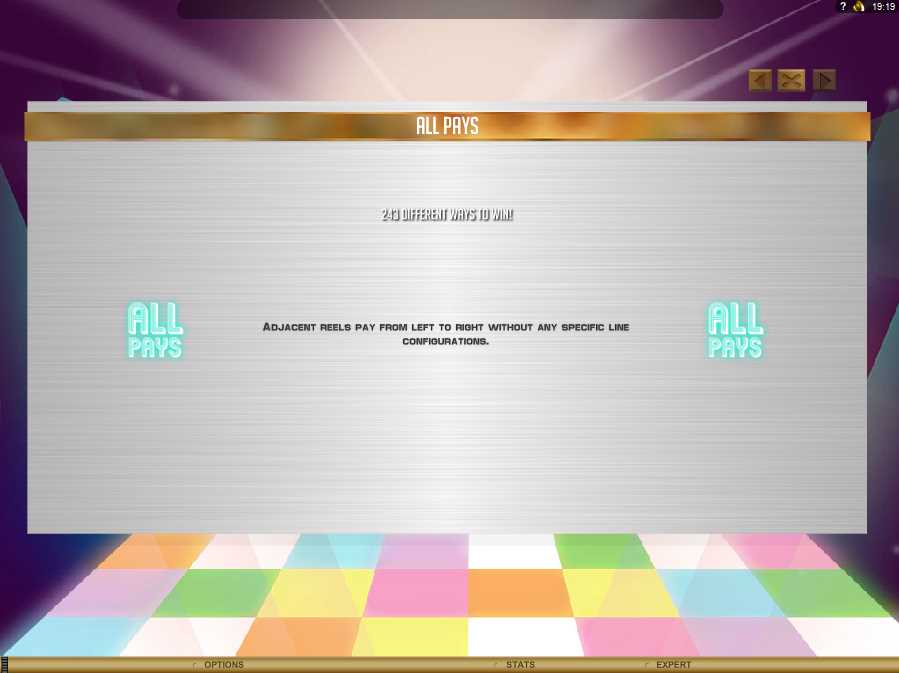 Disco Night Fright is a non-progressive 5 reel 243 ways paylines video slot machine game from microgaming, it has a disco Halloween theme, and comes with a scatter symbol, wild symbol and free spins and has a maximum jackpot win of $1,250.00