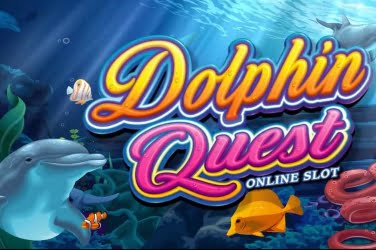 The first company that crosses our minds when talking about online Video Slots gaming has to be none other than the giant, microgaming Slots. History is the witness of the fine and multifarious slot games that the company’s talented developers have offered, and this new game, Dolphin Quest, is no exception in entertaining the players.

Dolphin Quest Slots is surely going to take the players to a whole new level under the water! You shouldn’t be surprised, as it is obvious from the name, the game is designed with the theme of an underwater world. With mind boggling graphics and a very serene and clear background music, the entire gameplay will seem to be extremely entertaining as you will have the pleasure to win immense amounts of rewards with the accompanying marine life.

With seahorses, hermit crabs, sea turtles, sting rays, dolphins and many other wild sea creatures playing the characters in the symbols, Dolphin Quest has followed the traditional Microgaming setup of having 5 reels with 4 rows of symbols and a total of 50 paylines. By doing that, it increases your chances of wining more coins. Also, you should keep in mind that there are no fixed number of ways to win; it is only numerous. The Dolphin Quest Bonus Game acts as a cherry on top to make your sack of coins and winnings even more heavier!

Dolphin Quest is loaded with features and bonuses that will only make you happier. Do have a look at some of the following:

Microgaming has put in somewhat a very intuitive idea in choosing the character of the wild symbol. It is the logo of Dolphin Quest itself, and on top of that, there are 2 types of wild symbols. One is Stacked Wilds, and when it appears, it will fill up all the reels. The other one is Multiple Wilds, which provides a lot more ways to gain extra winnings. If you achieve to get 5 Wilds in all 5 reels, you will be showered with a fixed heap of coins worth 12,500.

The Scatter symbol is represented by the golden dolphin that can appear at anytime. To get the rewards from the Scatter symbol, it is necessary that the following symbol falls on the right reels. For Dolphin Quest, reel number 2, 3 and 4 should have Scatter symbols in order to initiate the top notch bonus round. Free spins are also awarded to the players when they get these symbols.

There is nothing very fancy about the Free spins feature, delivered by Microgaming, in the Dolphin Quest. The Wild Symbols and the Dolphin Quest Bonus Round are enough to amend the needs for better free spins. Although there is no win multiplier, the free spins are given to the players based on the number of Scatter symbols that appear.

This bonus round proves to be the most sought after feature of this game because of the high amount of reward that could be won. The lucky player has the chance of winning up to 150,000 coins at a given bonus round. This round comes to life when the golden dolphins appear on the 2, 3 and 4 reels. When this happens, you will be taken to another 3-reel window, where each reel will show you different amounts and by pressing “stop the reels”, you will get to know what bonuses await you.

As it is an online video slot game, one has to understand that there are 4 columns with 5 reels on each. Like every other slot game, one has to spin to earn hundreds of coins while in the process matching as many similar symbols as possible to earn an even more handsome amount. The symbols are represented by various sea creatures and one should look out for Wild and Scatter symbols that trigger the bonus rounds and rewards even more.

The betting range or coin size is from 0.01 to 0.50 Dollars, choosing the suitable value as one likes. The gameplay does not have many dead spins, but the general winnings from each spin is not that high either. If someone wants to play the bonus round, they must make sure that they get the golden dolphin or the scatter symbols on the reels 2, 3 and 4; thus, transferring them to the bonus round from where no player ever returns empty handed.

There is no progressive style to the game and the option for gambling is also not added by microgaming Dolphin Quests. But the free spins and the big bonus rounds make up for it, by making the game very popular among the players worldwide. So play today and explore the deep sea, and at the same time relish unlimited winnings. 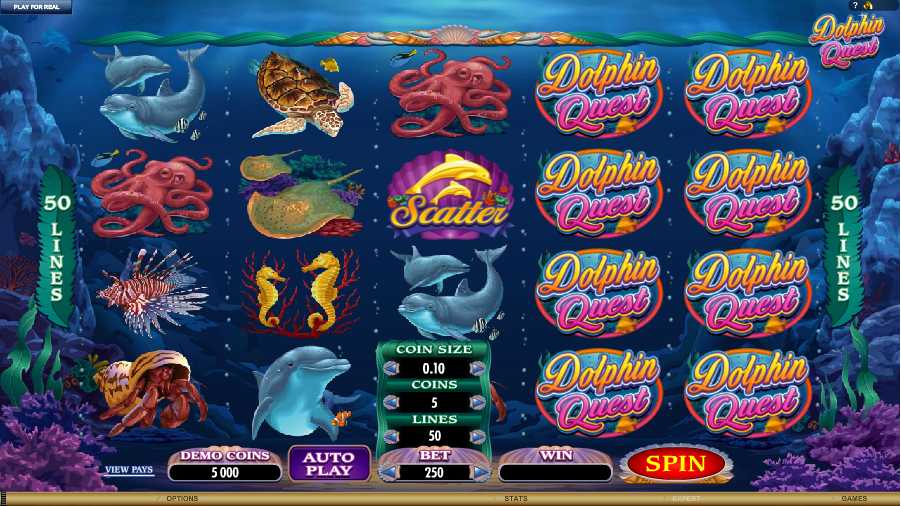 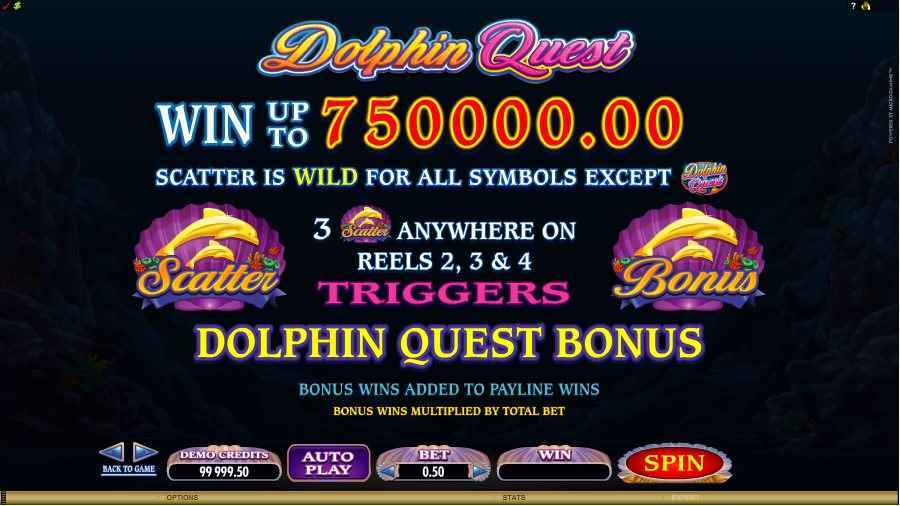 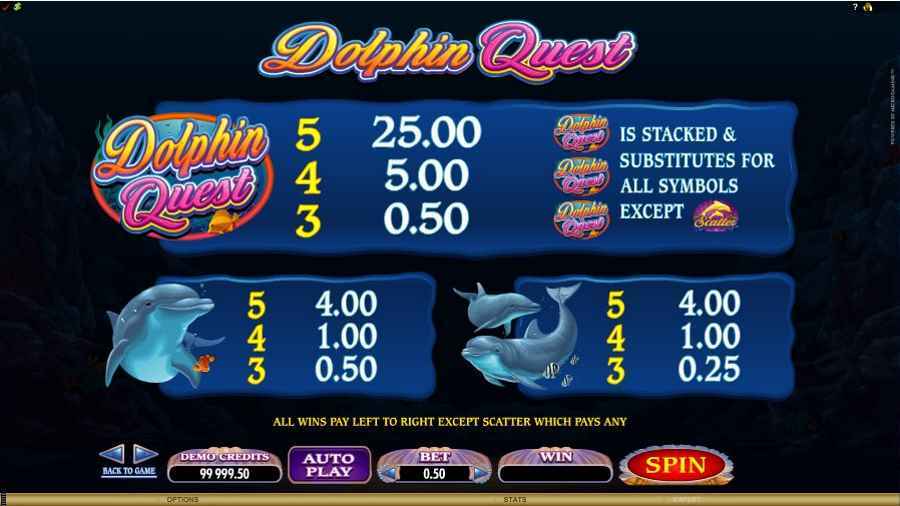 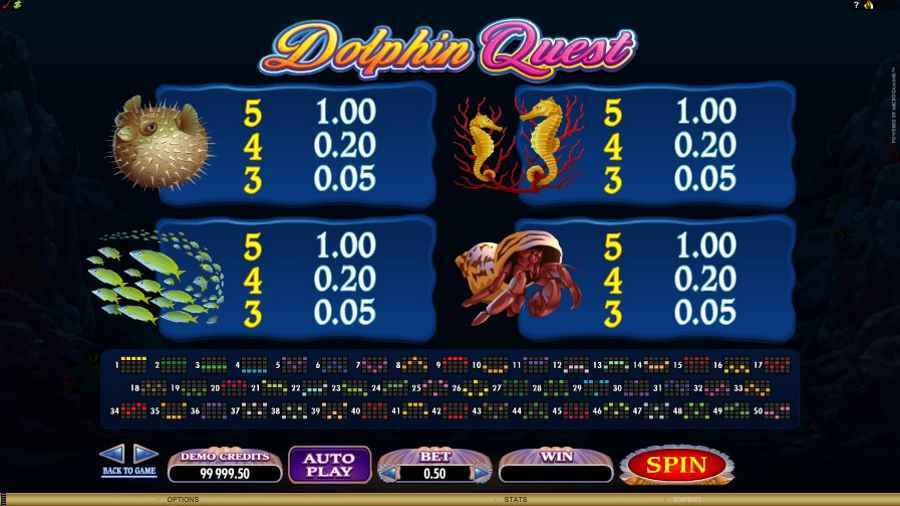 Dolphin Quest is a non-progressive 5 reel 50-pay lines video slot machine from microgaming, it has a Realistic Ocean Life theme, and comes with a wild symbol, scatter symbol, multiplier, free spins and has a maximum jackpot win of $6 250.00