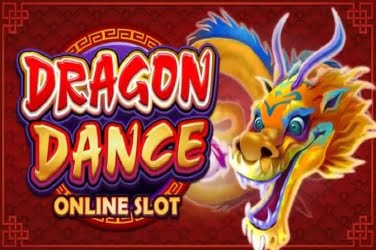 Rather than using the usual paylines, Microgaming have instead incorporated 243 ways to win in this online slots game. This means that as long as a player matches the various symbols from left to right adjacently then they will be able to increase their initial wager.

The game has an Oriental theme based around the Chinese New Year. There is a temple roof above the 5 reels which are encased within a golden frame. At the bottom of the screen players can see an ornate dragon statue at either side of the reels. While in the background there is a reddened night sky that is lit with Chinese Paper Lanterns.

Unfortunately although this is a 2016 release from Microgaming it is only available in a desktop format. Meaning that some players may feel a little restricted with the need of a laptop or PC to be able to enjoy the game.

This is perhaps not an appealing slots game for those who prefer more of a thrill during play. This is due to the fact that there is no Progressive Jackpot, Mini-Games or Gamble Feature included in the Dragon Dance slots game. Yet still it is proving popular with many players who enjoy its Oriental theme.

Lower paying symbols in this online slots game are from 9 through to Ace. They have been designed using bold colors and with decorative Chinese items such as Lucky Coins and a Hand Fan.

Other symbols that players can find upon the 5 reels of the game include a Dragon Mask, a Dragon Costume, a Pair of Dancers, a Drummer, and a young Girl with some cymbals.

The games Logo is the Wild symbol used in the game. When this appears on the reels it is able to change other symbols other than the Scatter. So by taking advantage of this particular feature can help a player add to their jackpot balance.

However it is the Scatter symbol which acts as the main Bonus Feature in this slots offering from Microgaming online casinos. Should 3 or more of this symbol be revealed upon the reels then the player is awarded with 15x Free Spins. There is also the benefit of a 3x Multiplier which is included in any winnings during this Bonus Round.

It is possible for the Free Spins Bonus Round to be re-triggered at any point during the game. So players have the opportunity to receive up to 30x Free Spins with an added 3x Multiplier which can prove very lucrative.

There is also the chance for players to activate the Re-Spin Feature which is included in the Dragon Dance slots game. Although this can be a costly element to the game it does allow players the opportunity to create more winning combinations.

With 243 different ways to win players can place as little as $0.25 on each spin during the game. However this does rise to a substantial $125 should the player wish to wager the maximum amount possible. As with any online slots game, the higher amount staked will result in bigger returns. Meaning that this particular release from Microgaming is proving popular with both high and low rollers.

Players can spin the 5 reels of the game in the hope of revealing the Bonus Features which are on offer. They include a Logo Wild, and a Chinese Cracker Scatter symbol. Not only can these provide more chances of creating a winning combination but also provide the player with a Free Spins Bonus Round with a 3x Multiplier. All of which can increase the final pay out amount which can be claimed at the end of game play.

This online casino game has an Auto-Play Feature for players to take advantage of. Not only can they adjust the speed in which the reels spin, but also the volume of the music and sound effects that are included in the game.

In addition to this players can set the game to play automatically should they wish to be less interactive with the Microgaming software. Then they have the thrill of returning to the game to receive their winning balance.

Although there are few Bonus Features included in this online slots game, it still provides players with plenty of entertainment. They are able to watch all the fun animations that have been included in the game while the 5 reels spin. The Wild and Scatter symbols allowing for more of the 243 winning combinations to be created. 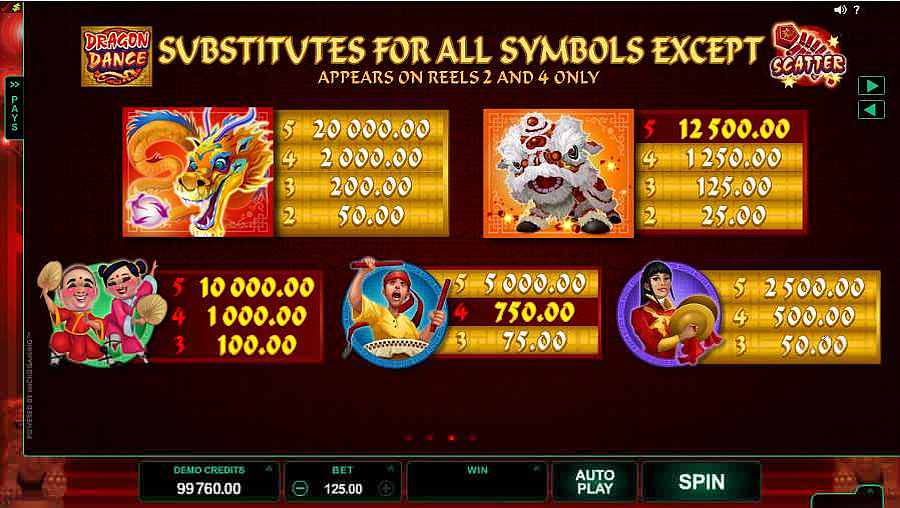 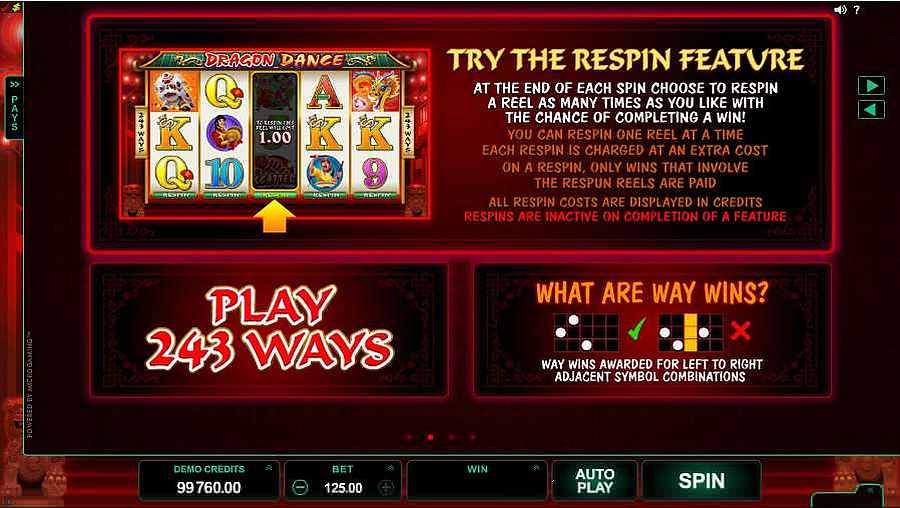 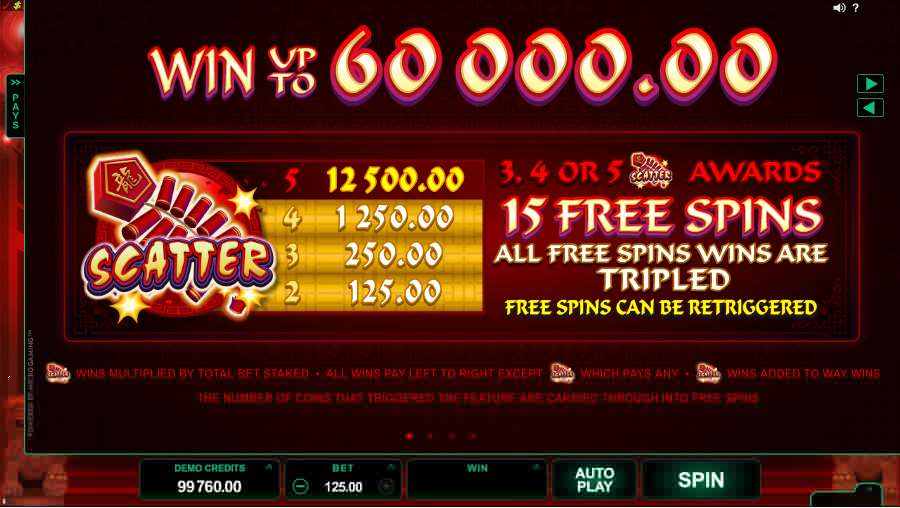 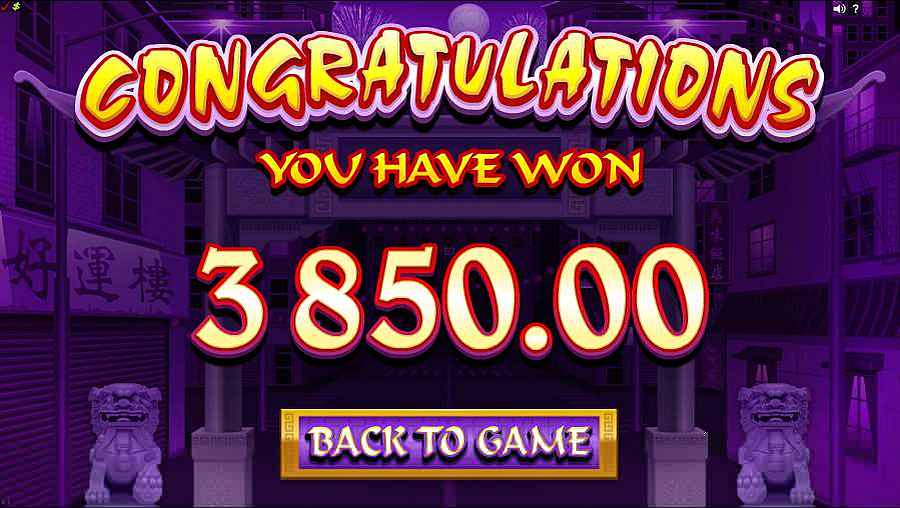 Dragon Dance is a non-progressive 5 reel 243 ways paylines video slot game from microgaming, it has a Chinese new year’s theme, and comes with a wild symbol, free spins and has a maximum jackpot win of $60,000