Emperor of The Sea Slot Review 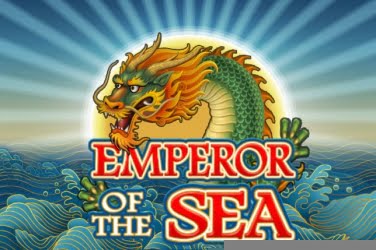 Microgaming have given this slots release a new look by incorporating 4 rows of play rather than the usual 3. It has a Watery theme which has an Oriental twist that many players will find appealing. And here they have used the lucky number 8 that is well-known in Asian cultures to entice players to come and see what return they can get from their initial stake. Introduction also includes Emperor of the Sea Online Slot latest release by Microgaming

The games 5 reels are set upon the surging tides of the Sea with a cloudy blue sky above. Found within a gold and red frame players can begin their voyage with 3 different play levels available, something of a unique twist that makes this a slots game to be investigated by any visitor to Microgaming online casinos.

Some soothing Chinese music can be heard during play which adds to the relaxing atmosphere that has been created. Yet the Emperor of the Sea games designers have used a chunky design to the graphics and given them a cartoony feel. This provides players with a fun animated game that they can enjoy on any device including Desktop, Tablet, and Mobile.

Emperor of The Sea Slot Features

The 9 through to Ace symbols found in the game are framed in gold and have all been given an Oriental twist by using gold coins and dragons as well as other images included in their design. These may only provide a low pay out amount but they do appear regularly across the games 5 reels.

Higher paying symbols are also in keeping with the games theme and include a Pot of Gold, a Turtle upon a bed of gold coins, some Koi Carp and a fearsome Green Dragon that emerges from the depths of the waters. Players will also find a Red Junk Ship, an ancient Chinese vessel that will take them on their quest to find some larger wins.

Wild – this symbol is the Emperor of the Sea Logo and can be found across all the games reels. Not only will this change other images besides the Scatter but will also become stacked when more winning combinations are found.

Scatter – a Gold Ingot is used as the symbol here and just 3 of these need to be revealed during a spin so that the Bonus Feature comes into play.

Free Spins – some players may think that 8x Free Spins is rather a low amount in comparison to other Microgaming releases. However they do come with 2 additional features that add to the thrill of the game.

Rolling Reels – any symbols that have been included in a winning combination will disappear from the screen. Further images then fall from above and this Feature continues until no more wins are revealed.

Growing Wilds – each win will add an additional Wild symbol to the reels which then can become stacked to fill the rows. This can be up to a maximum of 15 so there are even more opportunities for winning paylines to be found.

Emperor of The Sea Game Play

This Microgaming slots game has a rather simple format which some players may find a little dull. Yet it is proving ideal for beginners to online casinos and those who want to relax and take in the soothing atmosphere that the designers have created.

Wagers can range from 0.38 to 44.00 but this slots game has a unique twist as it be can set so the reels to spin with either 38, 68, or 88 paylines in play. It provides a RTP of 97% and although it is considered to have a Medium variance there is the chance for players to receive up to 1875x their bet each time the reels are set to spin.

Should players need to be away from the screen they are able to access the Auto Play feature at any time during the game. This online slots allows players to set the game to play automatically, either for a certain amount of spins or until the maximum wager is reached.

Not only is there a Logo Wild to improve the players chances of winning there is also a Scatter and a Free Spins Bonus Round which includes 2 special Features. And although there is no Progressive Jackpot or Gamble option there is still plenty to keep players entertained during play.

This is a fun online game that players of any level can enjoy while they journey across the waves in the Emperor of the Sea slots. 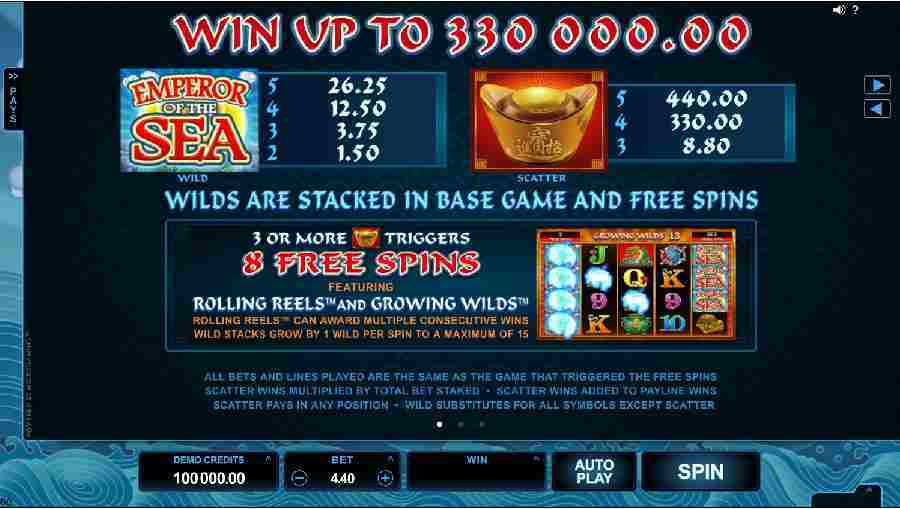 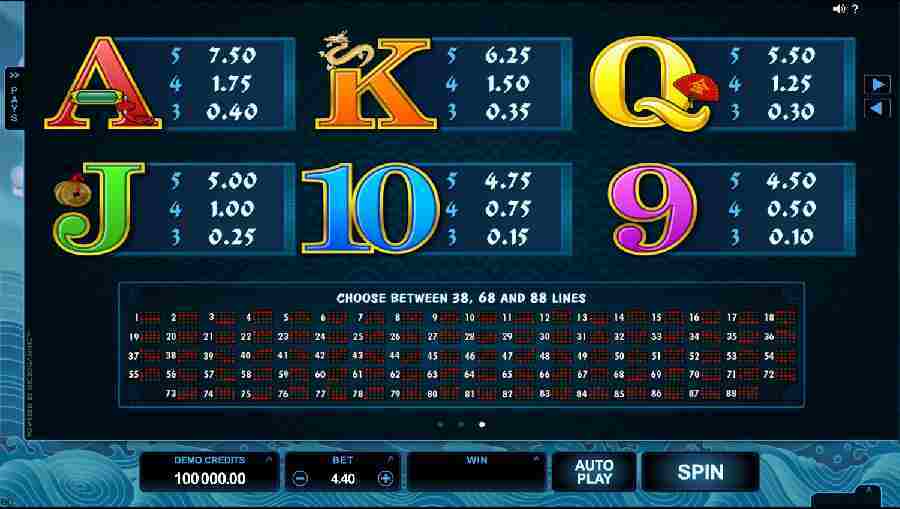 Emperor of The Sea is a non progressive, 5 reel, 38, 68 or 88 payline, and 880 coin video slot game from microgaming. it has a Oriental theme and the game features a Scatter symbol, Wild symbol, Free Spins bonus game. and has a maximum jackpot win of $/€82,500