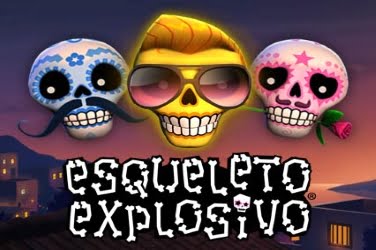 Players can forget about having a siesta and join the party instead in this Mexican themed slots game. The title of the game is Spanish for “Explosive Skeleton” and there is a definite Day of the Dead look to its design which reflects a Mexican holiday. However rather than being frightening a more comical feel is given with the fun animations and Mariachi music which plays in the background.

A Mexican backstreet at night is the setting for the 5 transparent reels of the game. Lit paper lanterns and bunting is hung between the houses and fireworks brighten the dark sky in the distance during play. There are 17 winning pay lines to be found across the reels and players are able take advantage of the Bonus Features that have also been included in this slots format.

Released in August 2014 by Thunderkick the Esqueleto Expolosivo slots game can be located in many of their online casinos. And it doesn’t matter if the player is using a Desktop, Tablet or Mobile all the graphics are high quality and look sharp upon the screen.

At the bottom of each reel is a skeletal figure holding a different instrument and these are the members of the band who add a quirky element to the game. Different colored Skulls are the symbols needed to create a winning combination during play and they will fall onto the bodies below. However if none are found the images will fall to the floor to be immediately replaced to allow the player a further chance to win.

Once a win is located then Enrico Mortis and his band The Boners will become animated and celebrate by striking up a Mariachi tune on their instruments. At this point in the game 2 Bonus Features are also activated which can generate more wins if luck is on the players side.

Wild – this is a Golden Elvis-like Skull symbol that can land on any of the 5 reels. Should this happen players will see it substitute for another symbol if a winning combination can be found. But there is an additional Feature included with this symbol which is further explained below.

Dropping Symbols – when a winning pay line is located the symbols that created it will drop from the screen to allow those above to fill their position. This can mean further wins to be added to the initial wager and as the Bonus Round continues until no more combinations are found this can provide some lucrative pay outs for the players to claim.

Mucho Multiplier – the players 1st win in the Base game is rewarded with a 1x Multiplier, however this is increased with each additional successive combination. So players could have the chance of a 2x/4x/8x/16x and even a 32x Multiplier if the symbols fall in their favour during this online slots game from Thunderkick.

Explosivo Wild – as well as changing other symbols when the Golden Elvis Wild appears it will explode while taking 8 of the closest images along with it. New symbols will then fall into their place to provide additional winning opportunities for players to cash in on.

Thunderkick may be a fairly new gaming development company but they have created this online slots so that it is appealing to both high and low rollers. This is due to the coin denomination ranging from 0.10 to 100.00 and this wager must be placed before the Play button can be pressed.

Now this is when the fiesta begins as players watch the cartoony looking Skull symbols fall onto the games 5 reels. All the time watching for the “Dropping Symbol” and “Mucho Multiplier” Features that the designers have included in this slots format. And although there may not be any Free Spins, or a separate Mini-Game players still have plenty to keep them busy in this fast based game.

For those players who need to be away from the screen doing other things there is an Auto Play option. This can be selected at any time during the game and all the players needs to do is select for how long they wish the reels to spin. It can either be for a certain amount of times or until the maximum wager is reached.

This release has a Low to Medium variance and with a RTP of 97.6% the Esqueleto Explosivo slots is already proving a hit with players who enjoy the Mexican theme.

–  Give Esqueleto Explosivo a free spin here or visit Thunderkick Casinos and play for real money. 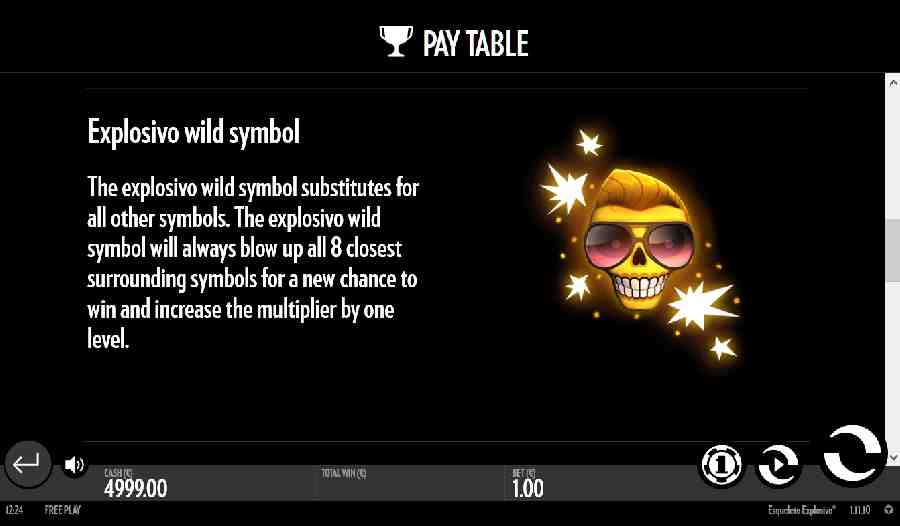 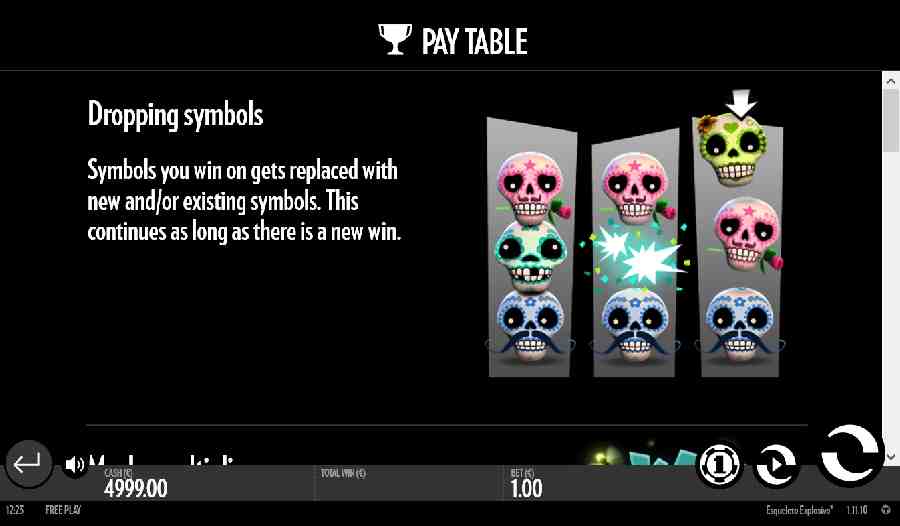 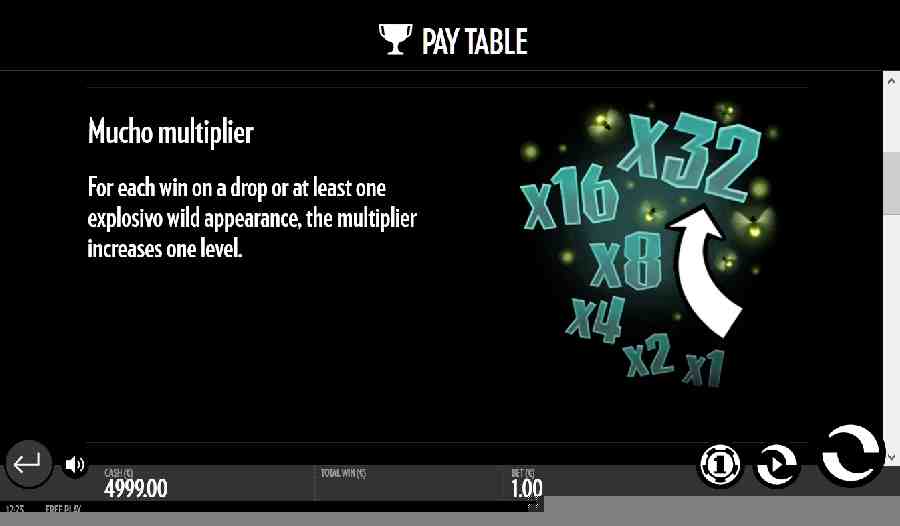 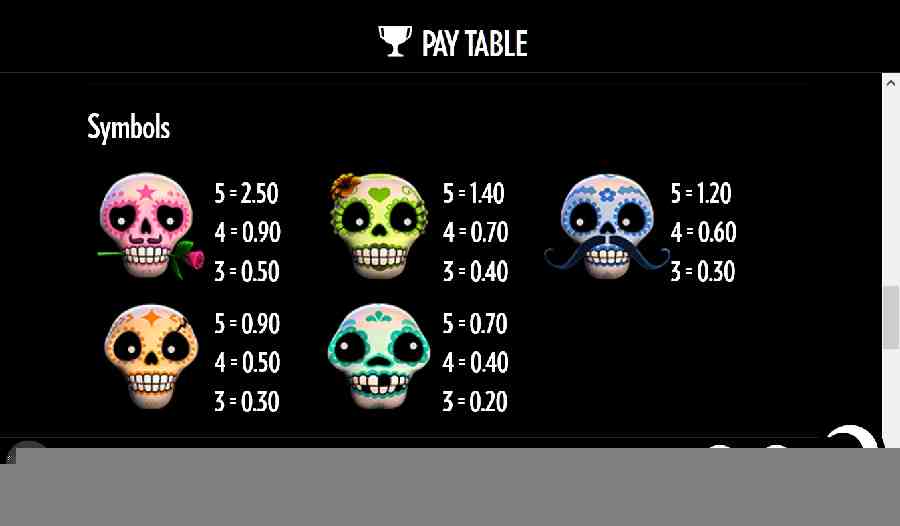 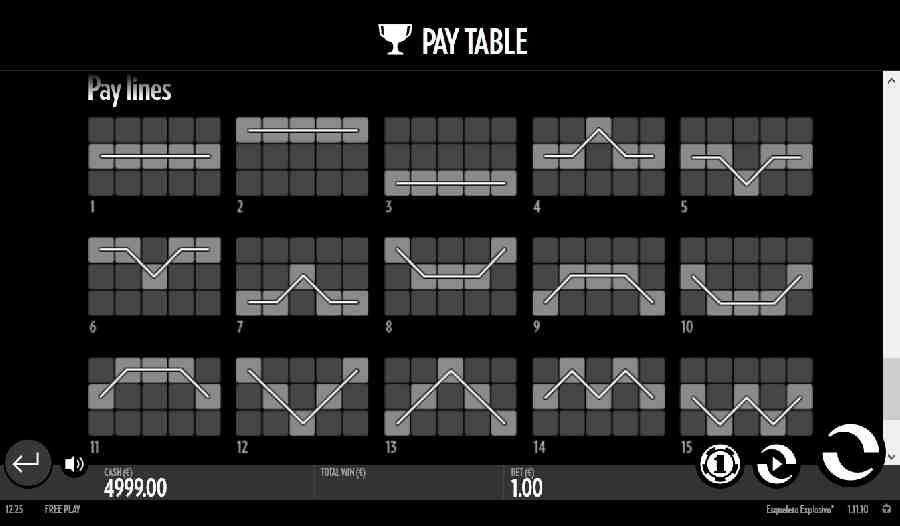 Esqueleto Explosivois a 5 reel 17 fixed paylines video slot game from Thunderkick software platform, it has an Mexican holiday theme, and features dropping symbols, Explosive Wild and Mucho multiplier, it has a maximum jackpot win of $8000