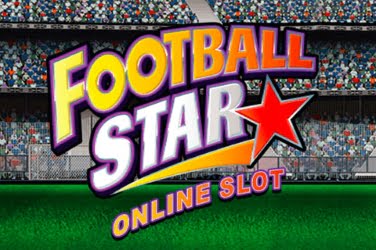 Are you the kind of football fan who wants to live the moments your favorite stars do on the field? Ever dreamed of being in Leonardo Messi’s shoes and grabbing a golden trophy with your own hands? Worry not, as all these are possible now with Football Star Online Slots. Combine the popular casino game of spinning reels with the raw action of football, and you get a game that is sure to leave you in a world of amazement. Microgaming Casinos is the proud producer of this thrilling game, and promises to give you an experience that you will never forget.

The game at its core has a 5 reel structure with 3 rows filled with fabulous options. The basic football stars shown in the game can either pass, shoot, defend or head, just like an actual footballer. When the player successfully scores a spin, the football star that represents the player will be animated and will kick the slots in a stunning motion. To give the feel of an actual stadium, football elements such as the referee, the texture of the field, jerseys, and shoes are always present. The special symbols such as the Football and the Football Star can serve as additional features.

What is a casino game without bonus, special features? Of course, Football Star Online Slots has that too.

The Football Star Logo has the ability to be an essential wild card, allowing any combinations alongside it to be successful in scoring points. To increase the chances of coming across this unique option, it is present in the three middle slots.

The Rolling Reels is as good as it sounds. After the player has won a spin, all the symbols that contributed to the win will literally burst into flames on the screen, vanishing in the process. This creates a void in the reels, allowing new options to take their places. This clears an otherwise jumbled up reel.

The random, but helpful Striking Wild can save the player at crucial times. The game will summon a powerful striker who, with one kick, is able to turn a whole reel into winning combinations. This piles up a lot of extra points.

Football scatter symbols are, as they are called, scattered. However, gather three or more of them, and you can earn 25 free spins. Sounds awesome? There’s more! These spins also contain automatic Rolling Reels, and it increases payout once you get a win streak going. This can reach to an astonishing 10 times the usual amount of points.

Now the question remains: Where can one play the exclusive mixture of casino and football? That is honestly the best part about this game, because it can be played just about anywhere! As the title itself states it to be an online game, it is available at any gaming websites with casino games. However, for the best game play with premium features, it is recommended to try the original version in Microgaming Casino’s own website. They also have other special offers that will enrich the already fantastic game of Football Star Online Slots.

The game itself is extremely simple to play. Like any regular slot reels game, the player will aim to complete sets of 3 matching combinations in the entirety of the grids. This is a bit different from the standard 3×3 slots, due to the increased number of columns maximizing the chances of wins. The sudden animations are an excellent touch, and the texts appear in an easy-to-read and understandable font. Overall, the clear cut instructions and pop up messages stating wins make the Football Star Online Slots game easily playable by people of all ages. If you are a football fan, then you should definitely try this new definition of fun today! 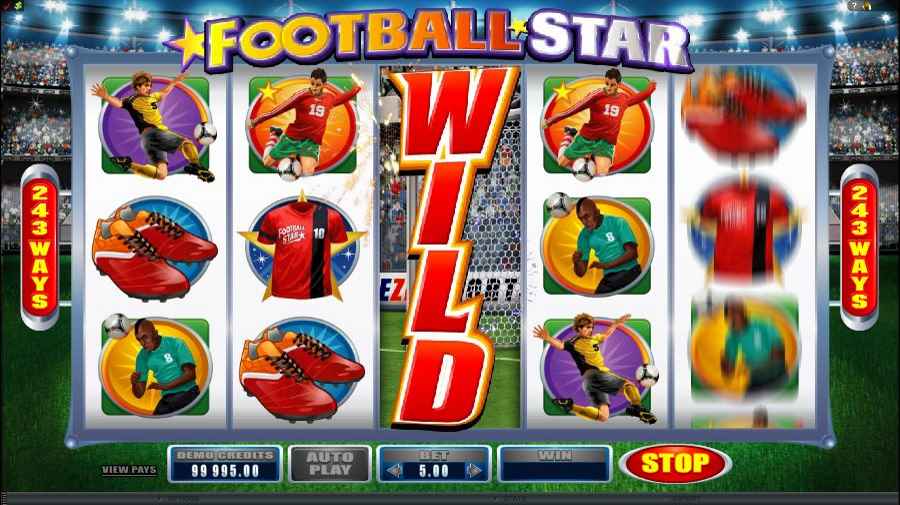 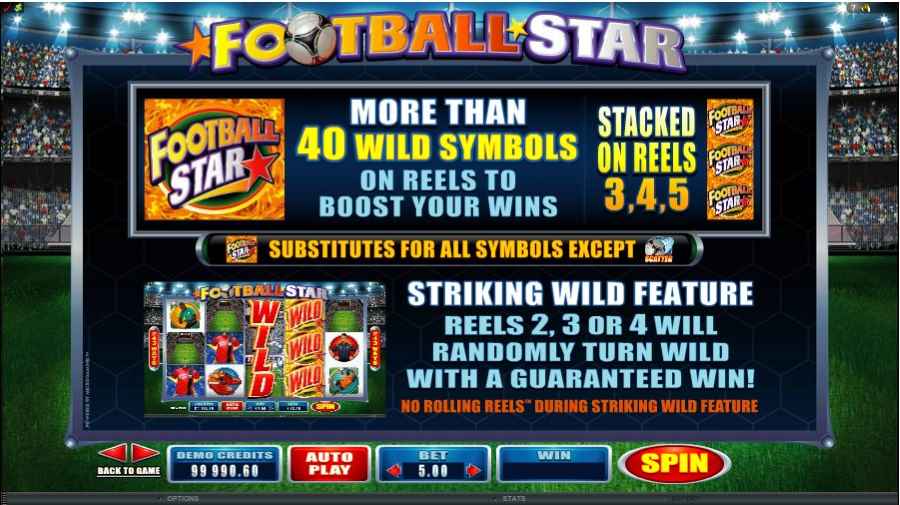 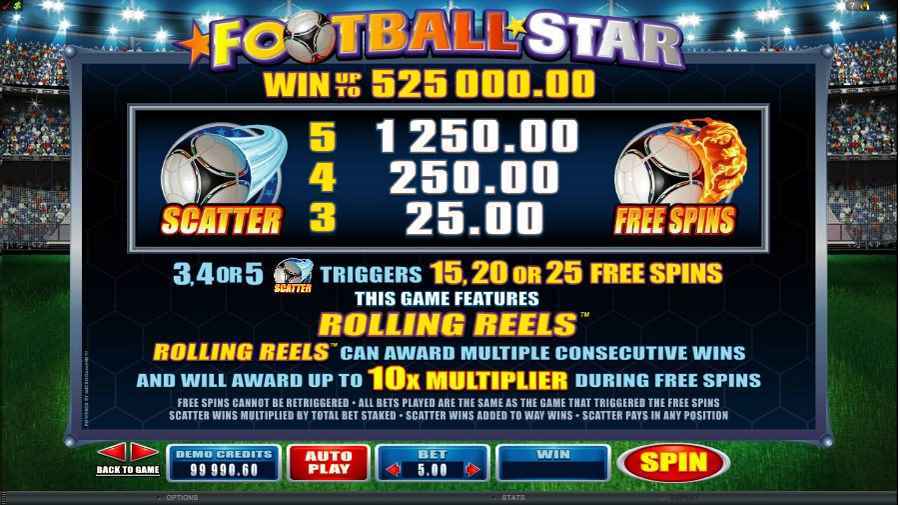 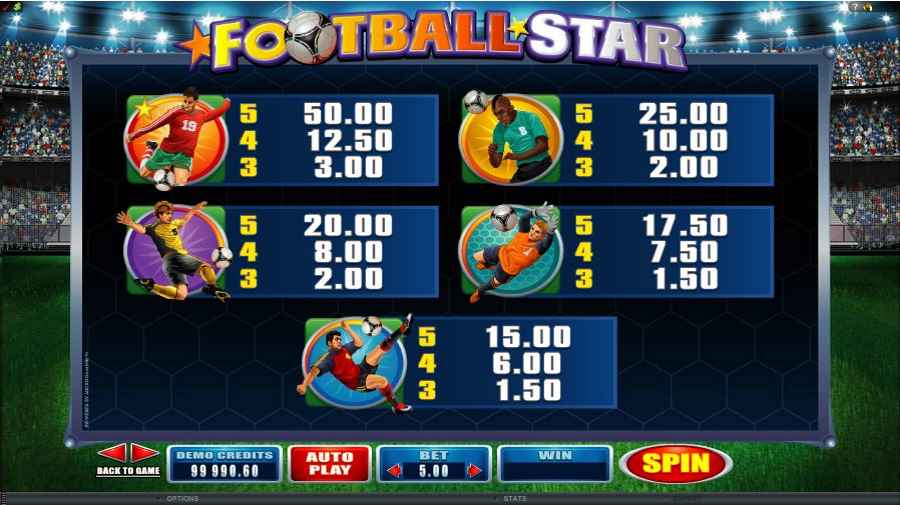 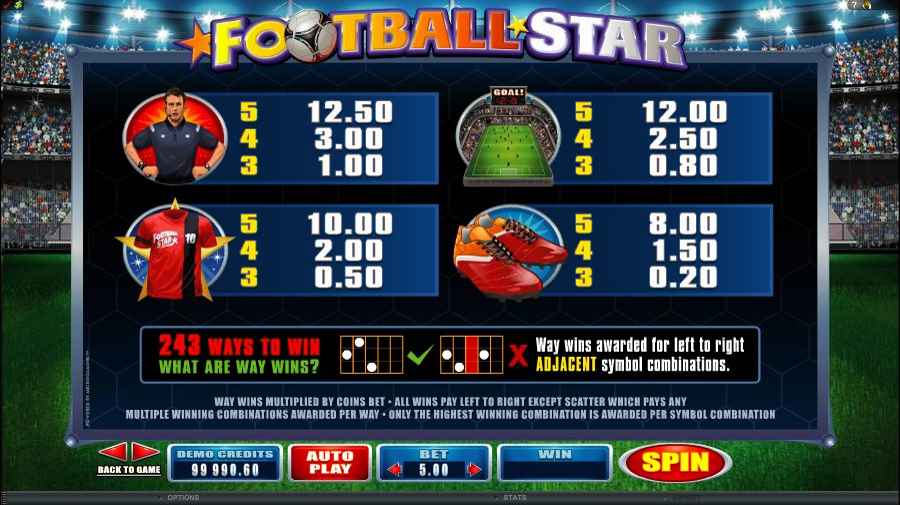 Football Star is a non-progressive 5 reel 243 ways pay-lines video slot machine game from microgaming, it has a Football Stars theme, and comes with a wild symbol, scatter symbol, multiplier, free spins and has a maximum jackpot win of $6 250.00