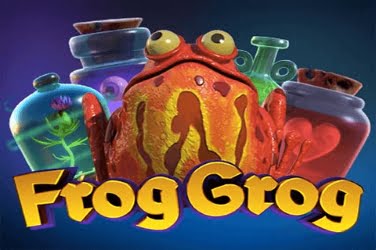 Since its release in October 2016 players have been taken to the lab of a mad scientist in this online slots game. There they can find his potions, along with skulls and the spell books that he uses. The shelves of a book-case is where the 5 reels can be found and they boast 23 structured pay lines for players to locate.

A dark gloomy feel has been created in the lab while bird cages swing from the ceiling as the reels are set to spin. However although the graphics are of a high quality the symbols are rather small on the screen. This may not pose much of a problem for players accessing the game via a Desktop or Tablet it could be an issue for those using a Mobile device.

The Thunderkick designers have given this casino game an unusual twist as there are no Free Spins or Scatter symbol included in it format. Instead they have given other rather quirky and exciting Bonus Features for players to enjoy during the Frog Grog slots game.

Various items in jars are stored on the bookcase reels and include a Moth, a Flower, a Heart, and a pair of Eyeballs. Players will also find the scientists Potions, one Blue and the other Green in their Vials and these are used as symbols in the game.

Wild – a fiery Orange colored Frog is the Wild symbol and it will substitute for any other so that there are more chances for players to create a winning combination. It also will activate a Bonus Feature which adds another element to this online slots release to keep players entertained.

Dropping Symbols – this can generate some big wins if the symbols fall in the players favor and especially if they are wagering the maximum amount. It is the main Feature in this slot games format and has attracted players of all levels to Thunderkick online casinos.

Each time a win is located across the reels the symbols involved will “drop” from the screen. Their positions are then filled with others which can result in some further pay lines being found. At this point any winnings will receive a 1x Multiplier and this Bonus Round will continue as long as winning combinations are spun. However with each additional win the Multiplier increases up to a maximum of 7x the player’s initial stake.

Frog Burp – if the Orange Frog Wild is included in a winning pay line then he will “burp” and turn Blue. Now all the symbols in the same row and column are removed from the screen to allow others to fall into their place. However the Wild symbol will remain in place for the rest of the spins or as soon as it is included in a win.

Mystery Game – this Bonus Feature can occur randomly at any point during play of this slots game. It can be activated after a “no-win” spin and the players will see all the symbols magical vanish from the reels. The only symbols that will remain in play if located anywhere on the screen are the Moth, the Flower, and the Frog Wild.

Now any empty spaces are filled with new symbols which can result in some bigger wins to be added to the players final jackpot balance.

Before the scientist’s lab can come to life players must first decide how much they would like to wager. The initial stake can range between 0.10 and 100.00 and there are 23 winning pay lines that can be found across the games 5 reels. This means that this online slots release has proven appealing to both high and low rollers since it hit the Thunderkick online casino circuit.

This slots game has an unusual layout which is rather unconventional compared to others that are available to players. So the fact that there are no Free Spins, Progressive Jackpot or Gamble Feature may deter some who are looking to maximize on their wagered amount. However the Dropping Symbols Feature and the chance to activate the Mystery Game are elements of the game that will entice any player who enjoys the Magical theme.

Although the pay outs rewarded are rather low this is a highly creative game that will keep players entertained throughout. And with a RTP of 96.10% there are numerous chances to add to the jackpot balance in the Frog Grog slots game. 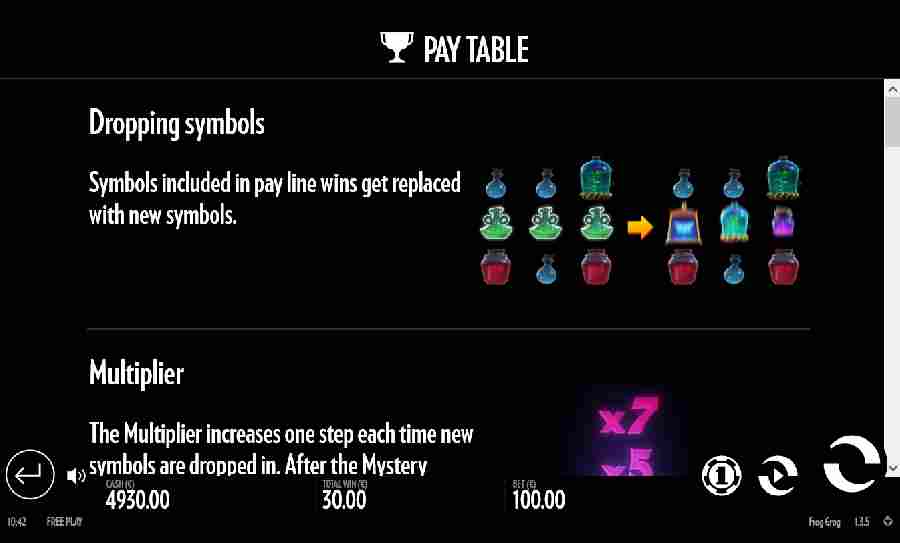 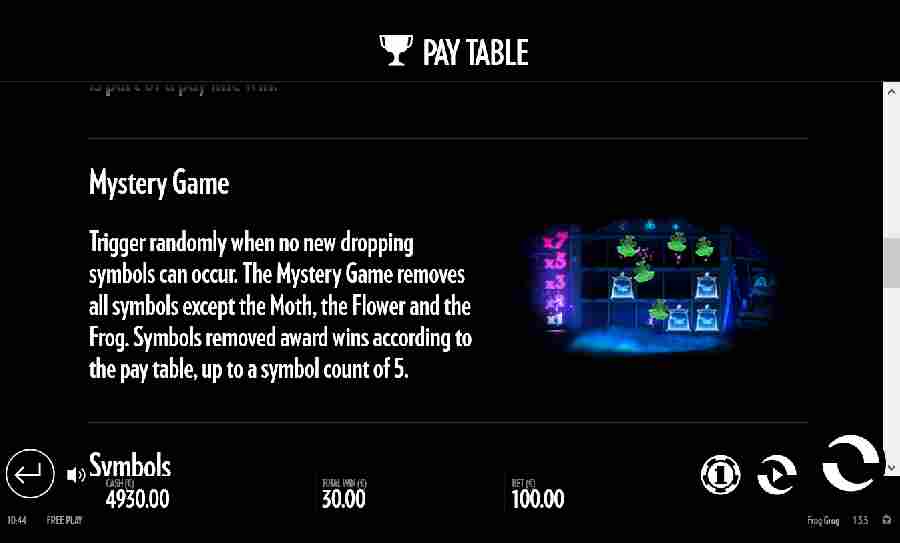 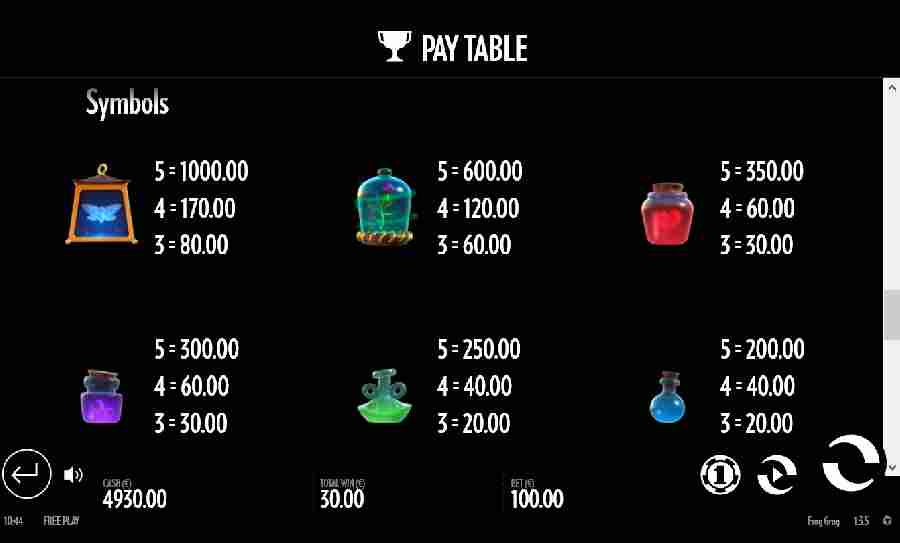 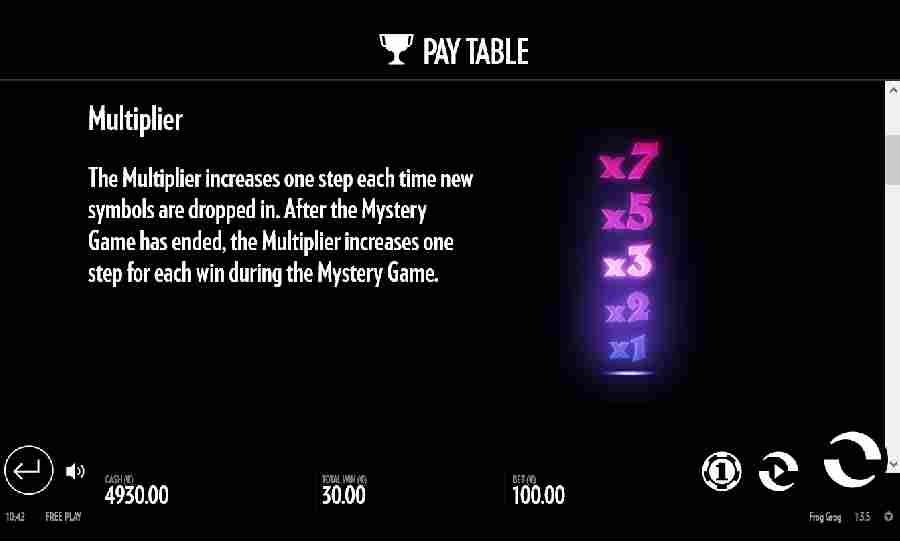 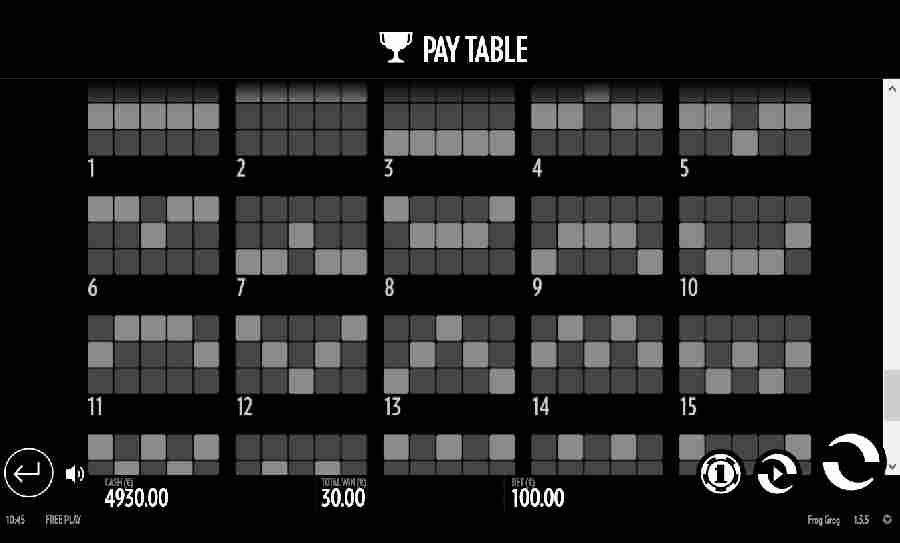 Frog Grog is a 5 reel 23 fixed paylines video slot game from the Thunderkick software platform. The game features a mystery game, multiplier, Frog burp, and wild frog, with a maximum jackpot win of $1000.