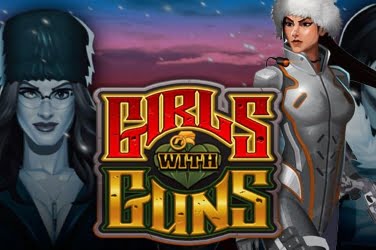 Released in 2014 this is the sequel to microgamings Jungle Heat, players can find the same main characters in the Girls with Guns: Frozen Dawn slots game.

Katherine is the team leader, while Kira is a trained sniper. Artillery specifications are dealt with by Maria and Zoe is the tactical expert. The team’s infiltrator is Jess and Alex is a demolitions expert. Joined together they are a formidable force.

Now they have been sent on a mission to the Arctic and these beautiful women clad in their winter warmers are not only armed, but also dangerous. Hunting for the evil Saskia who looks like a Russian spy and is now threatening to take over the world.

Quality graphics have been used in the games design along with an engaging soundtrack helping to add to the thrilling atmosphere that has been created. The games 5 reels can be found set upon a mountainous scene with snowflakes falling in the background. These animations continuing within the game when the main symbols are included in a winning combination.

At the moment it is not possible to enjoy this online slots game on a Mobile device. Yet it is proving popular with gamers from around the globe who welcome the entertainment that it offers.

Along with the 6 ladies and Saskia there are also some Ninja Girls dressed in black with their faces covered which are used as a symbol in the game.

The Ice Fortress symbol, the women’s base of operations, can also be found. And the Royal symbols are the usual 10 to Ace images created using bold vibrant colors.

It is the Girls with Guns: Frozen Dawn slots Logo which is used as the Wild in the game. Other than the Scatter it is able to change any symbol on the reels if there is an opportunity to create a winning combination. Players will also find this icon stacked upon the 1st and 2nd reel which is an additional Bonus to the game.

There is a Special Wild Feature included in the game and its symbol shows the women dressed in black before an icy background. When it appears on the 3rd reel it expands to fill the reel to give numerous chances for players to add to their winnings.

A Satellite is the Scatter symbol and provides players with the most opportunities to create 1 of the 243 winning combinations. When 3 or more of this symbol appears on the reels an immediate cash amount is added to the pay-out balance.

Players at this point will also be awarded with 12x Free Spins along with a random Wild Feature. This could be either Frozen Wilds or Magnetic Wilds which are added to the reels to provide additional ways to win.

Frozen Wilds will stay in play for up to 3x Free Spins once they have appeared upon the reels. However if the reel becomes stacked then it will remain in play until the end of the Bonus Round.

Magnetic Wilds will initially appear on the 5th reel of the screen, becoming sticky for 1x Free Spin. At this point the symbol shifts to the 1st reel as the spins continue with the chance of more Wilds being added. The round ends if the reels become filled at which point the symbols will explode and disappear.

An interesting element has been added to this particular Girls with Guns release from Microgaming. Included in the format is a Shootout Bonus Round which can occur randomly when a spin doesn’t result in a win.

Should it be awarded then the player will see one of the girls appear on the screen, armed and ready. 3 symbols will become targets and the player must choose between them and once shot at a Bonus Prize is revealed.

As there are 243 different ways to win in this online slots game the coin denominations range from $0.01 to just $0.05. Even so there is a minimum amount of 30 coins which must be placed on each spin. Winning combinations are paid from left to right across the screen and it is considered to be a medium variance game.

These are all factors of this Microgaming release which allows both high and low rollers to benefit from its Bonus Features and potential winnings. With various Wild symbols, a Scatter and 12x Free Spins it is a fast paced game that many players will find appealing. Players of any level are sure not to be left disappointed with the Girls with Guns: Frozen Dawn slots game. 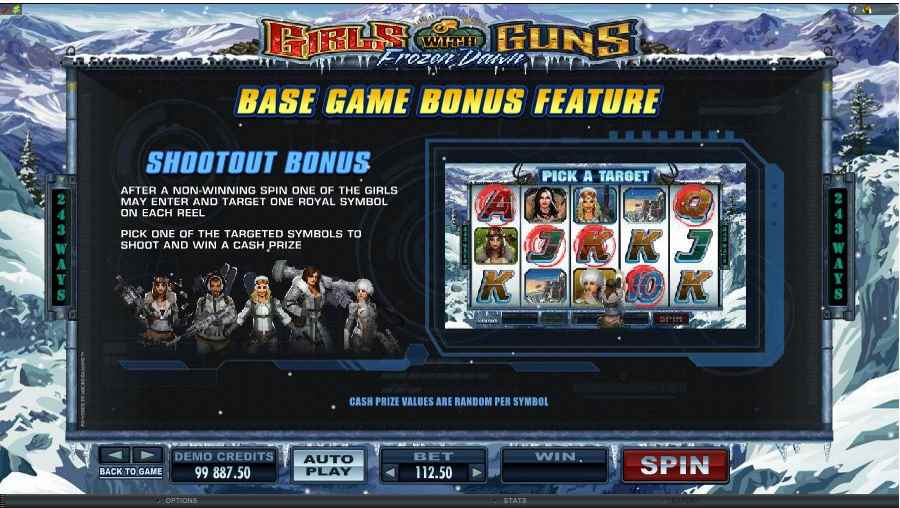 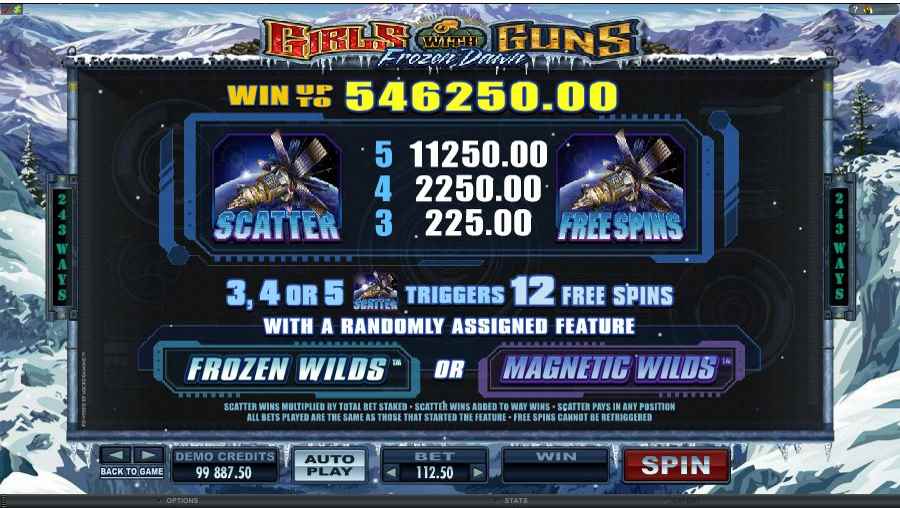 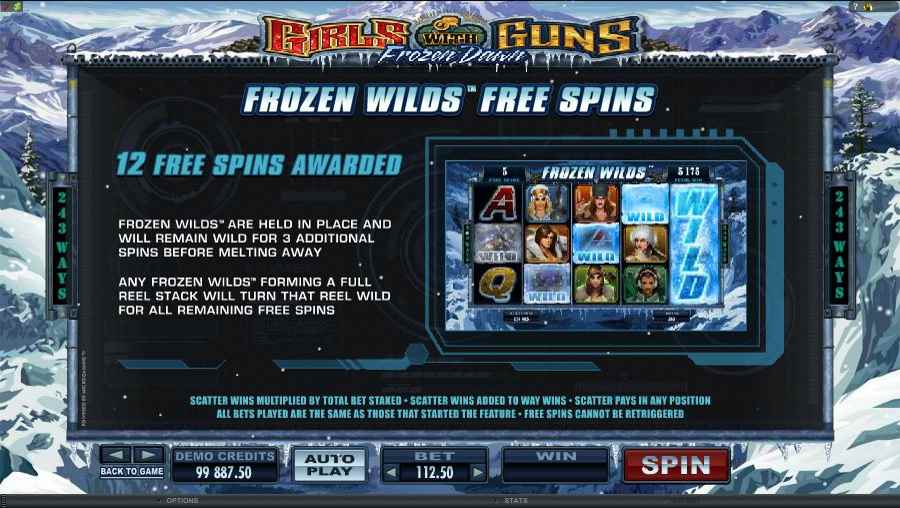 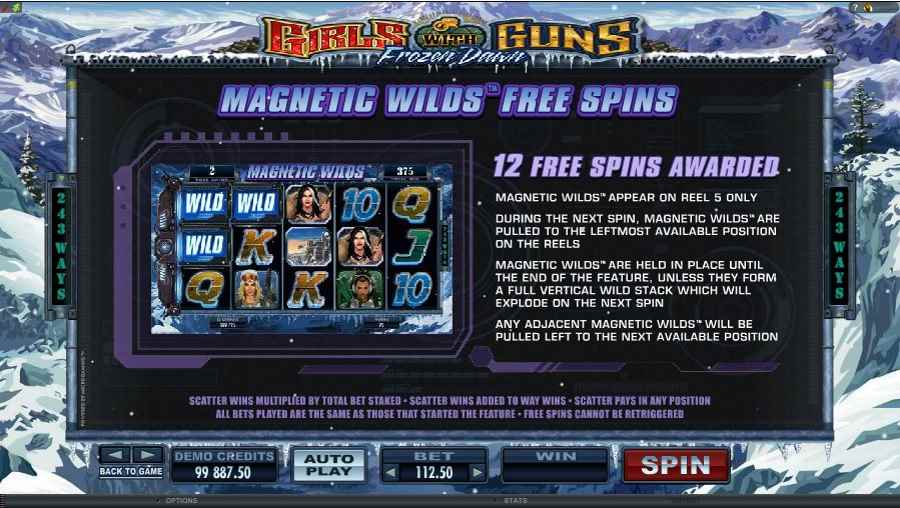 Girls with Guns Frozen Dawn is a non-progressive 5 reel 243 ways pay-line video slot machine game from microgaming, it has a Girls with Guns theme, and comes with a wild symbol, scatter symbol, free spins and has a maximum jackpot win of $2,250,00.