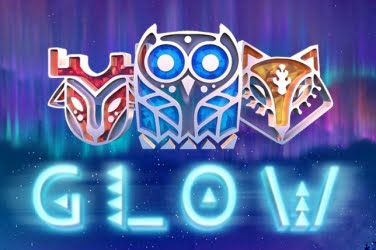 There is an atmospheric feel to this online slots game with its theme based on Nature. Net Entertainment have used see through reels in the design so that players can view the Scandinavian countryside in the background. It is night and the cloudless sky reveals random stars. While the real attraction is the sight of the Aurora Borealis (also known as the Northern Lights) in the distance and is the inspiration for the name of this release.

Sharp colors are prominent throughout the game and players can also enjoy some fun animations when a winning combination is found. As the 5 reels spin the players are able to hear some soothing music and sound effects which add to the atmosphere that has been created.

With the opportunity to play this online game on any Mobile device it is easily accessible at any time. By doing this Net Entertainment have ensured that Glow slots can be found in their many casinos at any time for players to take advantage of.

Animal Masks are the main symbols in the game and there are images of five different animals depicted upon them. Players can find a Wolf, a Fox, an Owl, a Rabbit and a Deer. Lower paying amounts are awarded when the 10 through to Ace symbols are used in a winning combination. These symbols have all been designed with gentle delicate shades which are in keeping with the games theme.

Stacked upon the 2nd, 3rd, and 4th reels players can reveal the Pink Bear which acts as the Wild symbol in the game. When it appears any other symbol can be changed to create the highest pay out amount to be added to the player’s final balance. Any winnings will also benefit from a 2x Multiplier to increase the jackpot even further.

Net Entertainment have provided a different element to this release by not including a Scatter symbol. Instead the Free Spins Bonus Round is activated through the various Animal icons and is the main Feature to this casino game.

The Deer awards players with 1x Free Spin when either 2 or 3 of this symbol is found. This increases to 2x and 5x respectively should more be located. All the other Animals need a combination of at least 3 to allow 1x Free Spin, this again rising to either 2x or 5x.

Each winning payline that is created during the Free Spins Bonus Round will also receive a 2x Multiplier. Something which will appeal to players of any level while enjoying this online casino game.

To delight players further the designers have incorporated other Features which can be activated while in the Bonus Round. The 1st of these is the fact that the Free Spins can be re-triggered at any point. But unusually the lower paying symbols are also able to add further spins should they help to create 1 of the 15 paylines.

The Wild symbol could also come into play during the Free Spins Bonus Round. Should it be located then not only can it change other symbols but any winnings are now given a 4x Multiplier.

Coin sizes are varied in the game which gives players the chance to wager as much or as little as they like. Wagers can be placed on any of the 15 paylines beginning at just 0.01 and rising to 1.00. As there is the opportunity to allow from 1 to 10 coins on each line this means that bets can be 0.15 to 150 on each spin. This makes it a slots game which can be appealing to both high and low rollers who enjoy online casinos.

Although there is a Wild symbol within the game, it is the Free Spins Bonus Round that provides players with the most rewards. With Multipliers and all symbols adding further spins there are plenty of opportunities for players to add to their winnings.

However regulars to online casinos may be disappointed that this is a Non Progressive game. Plus there are no Mini-Games for players to enjoy and provide additional entertainment. On the flip side this factor can make it ideal for beginners to online slots games and those who prefer the slower pace.

Players are left in full control throughout the game with various setting options to hand through the Control Panel that is shown at the bottom of the screen. This means that they can alter the volume of the music and at which speed the reels spin. In addition Auto Play is also available so players are able to leave the game to run automatically.

Offering a RTP of 96.70% and with regular pay outs the Glow slots game is proving popular with many players from around the globe. 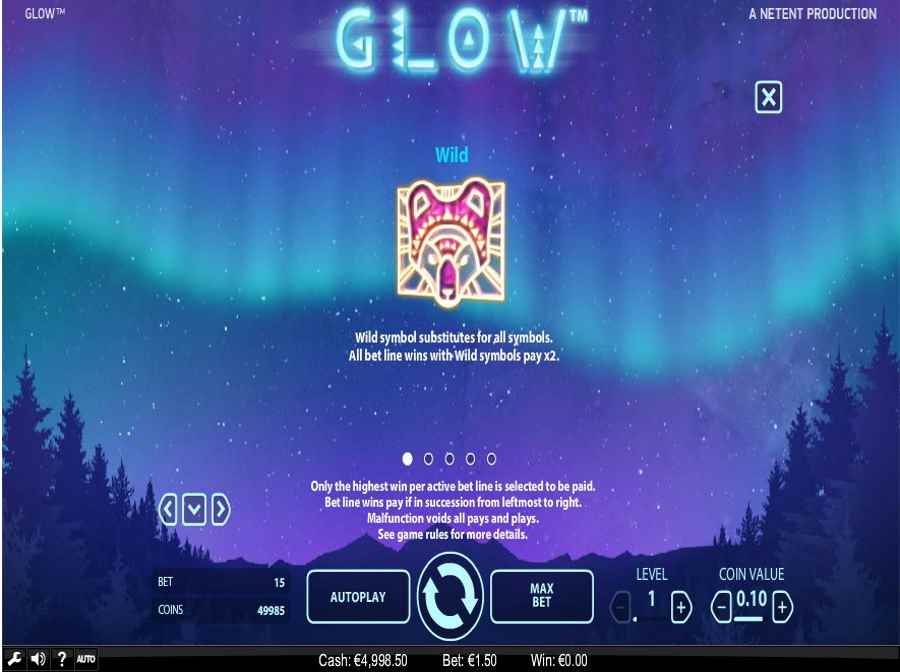 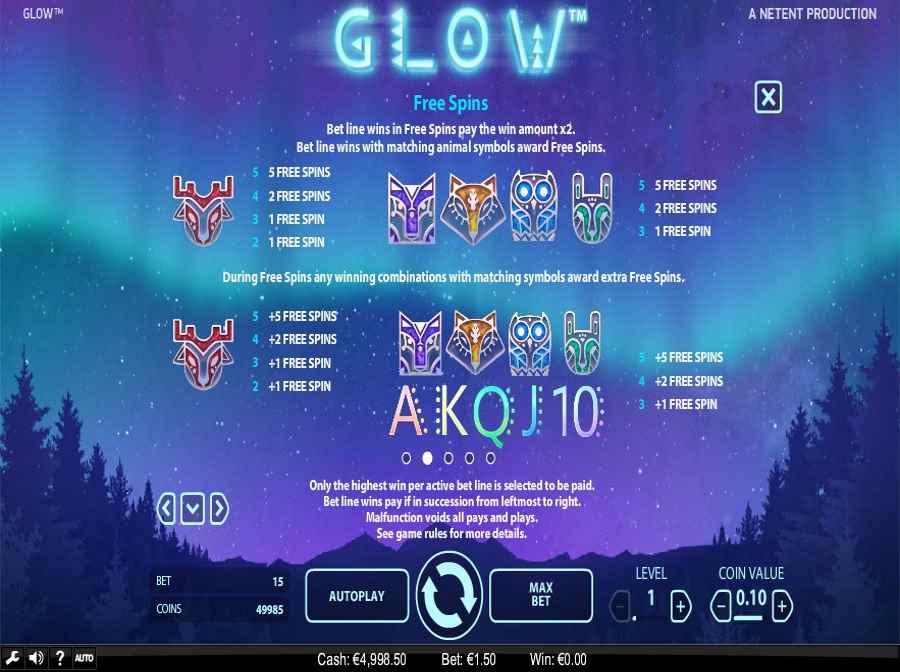 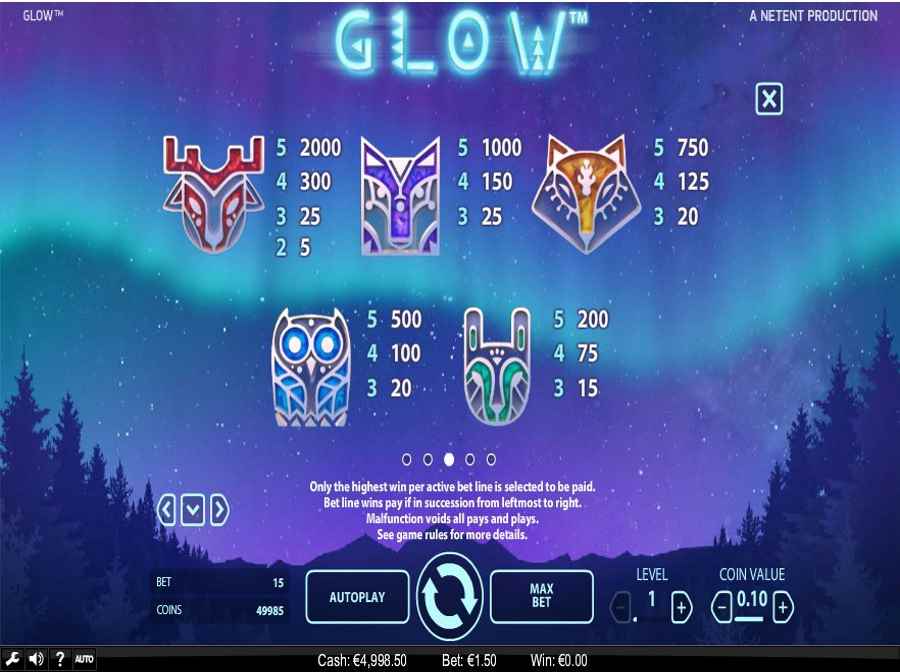 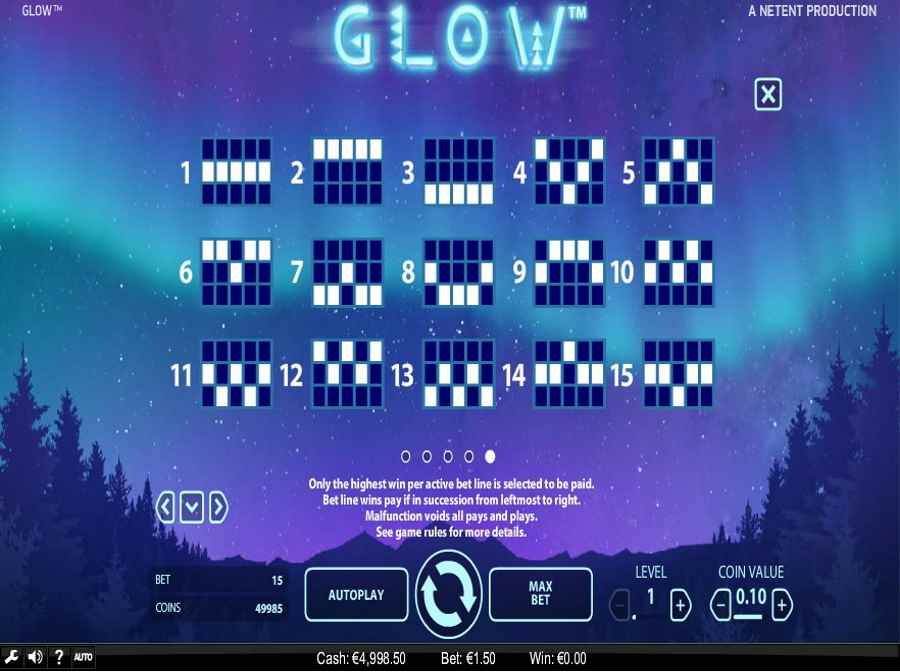 Glow is a non-progressive 5 reel 15 paylines video slots machine game from net entertainment, it has a Nature theme, and comes with a wild symbol, multiplier, free spins and has a maximum jackpot win of $40,000.