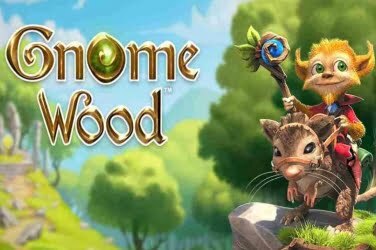 Gnome Wood slots were released in September 2017 and its creation has been inspired by a Fantasy theme. The designers at Rabcat using their usual high-quality graphics to transport players to an enchanted Wood where a cheeky Gnome lives with his Mouse companion.

Set among leafy green trees players can find the games 5 reels, the main characters home hidden among the roots to the left. To the right, there is the sun worship stone which is visited to restore magical powers. A bright blue sky can be seen above the reels while the Control Panel has been creatively incorporated into the rocks at the bottom of the screen.

Available on Desktop, Tablet and Mobile devices that are compatible with the software this is a slots game that has various entertaining features. Players can take advantage of 2x Wild symbols, a Wandering Wilds Feature, up to 20x Free Spins and a Gamble Bonus Round. All of which can help them to add to the initial amount that they wagered on the 25 structured winning pay lines.

The 4 lowest paying symbols are depicted as Runes which are engraved with a design to represent the elements of Earth, Wind, Fire, and Water.

Players will also find a Cauldron, a Spell Book, a Pink Crystal, and a Leafy Staff symbol within the game. However, the main images are those of a friendly looking Mouse and the grinning Gnome who can reward players with 10x their stake if all 5 lands on the reels.

Wild – there are 2x of these symbols hidden among the reels of this online slots game and both look like stone tablets. The 1st is a simple Blue “Wild” while the other is an “x2 Wild” lit in Purple. They both substitute any of the Basic Symbols but the “x2 Wild” obviously doubles any winnings that are created.

Scatter – a Gold Coin engraved with the face of the Gnome is used as this element of the game. However, players will need at least 3x of these symbols before being able to activate the Bonus Round that the designers have included in this slots format.

Wandering Wilds – during the base game both Wild symbols will only appear on the 2nd, 3rd, 4th, and 5th reels. Once it lands in position the player is given 1x Re-Spin while it moves 1x place to the right. This Round continues until the Wild has disappeared from the screen and if no more of this symbol has been spun.

Free Spins – this Feature will begin if 3x or more Gold Coin “Free Spins” symbols are spun onto the reels. Now the player can benefit from 10x Free Spins which come to some additional twists to make this Round even more fun.

During this part of the game players will find that not only is the Wandering Wilds Feature still included but that the symbols are now allowed to land on the 1st reel. This means that there are more chances for winning amounts to be added to the player’s jackpot balance.

It is also possible to re-trigger the Free Spins Bonus Feature if more Scatter symbols are located on the reels so that the Round can continue for even longer to reward bigger wins for the player to claim.

Gamble Feature – utilizing this Feature is entirely up to the individual player but it does offer players the chance to double their winnings. Once a structured pay line has been created players are offered the opportunity to choose between 2x Gold Pots. Should some magical effects emit from the top of this then the player has won. However, if the Pot falls then they lose the payout amount that they were due.

If the player was lucky enough with their 1st guess then they are able to continue to add to their winning balance up to 5x or until the maximum 10,000 in cash is reached.

There are 25 winning pay lines in this online slots game and all of them need to be wagered upon before the reels can be allowed to spin. Rabcat has allowed players a wide range of coin denominations however so that both high and low rollers can enjoy their latest release.

By using the +/- button on the Control Panel players can place anything from 0.25 to 50.00 before the game begins. Then all they need do is sit back while the Wandering Wilds and other Bonus Features generate winning combinations with regular payments being added to their final jackpot amount.

And as the Gnome Wood slots game offers a Medium Variance along with a RTP of 96.16% this imaginative release is proving a must try with numerous players worldwide. 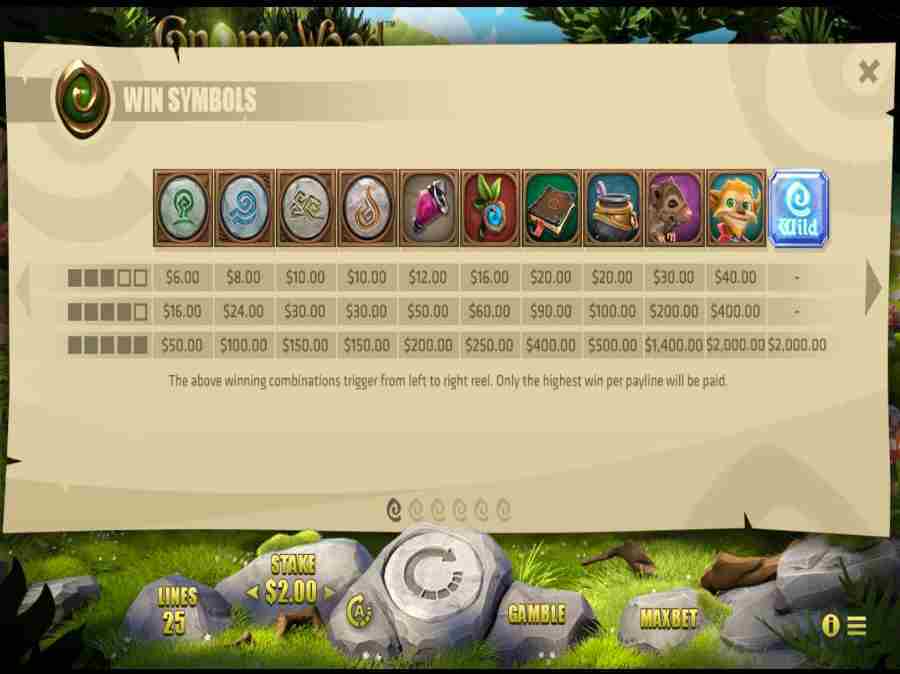 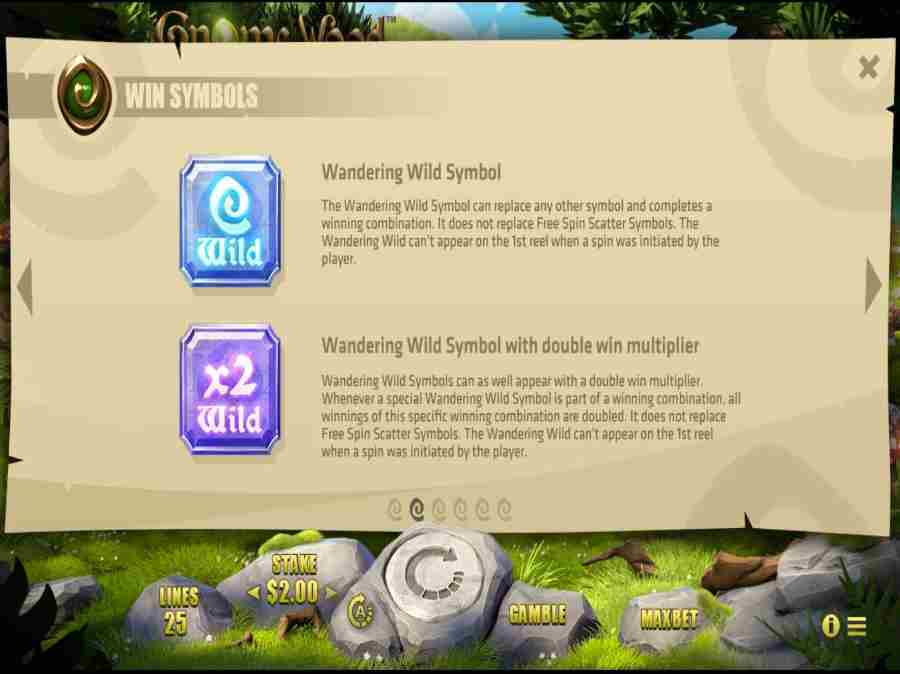 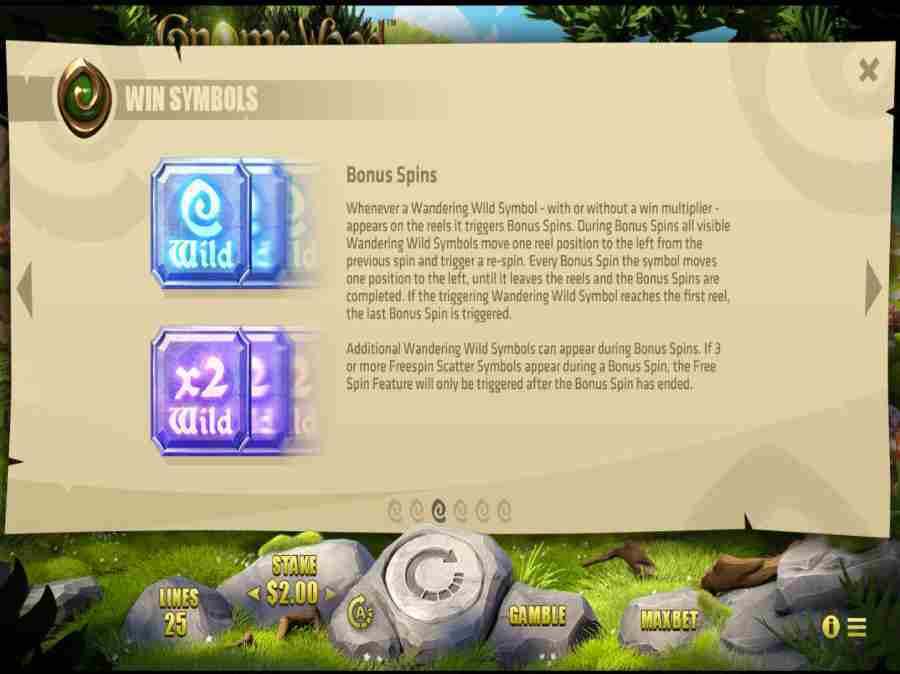 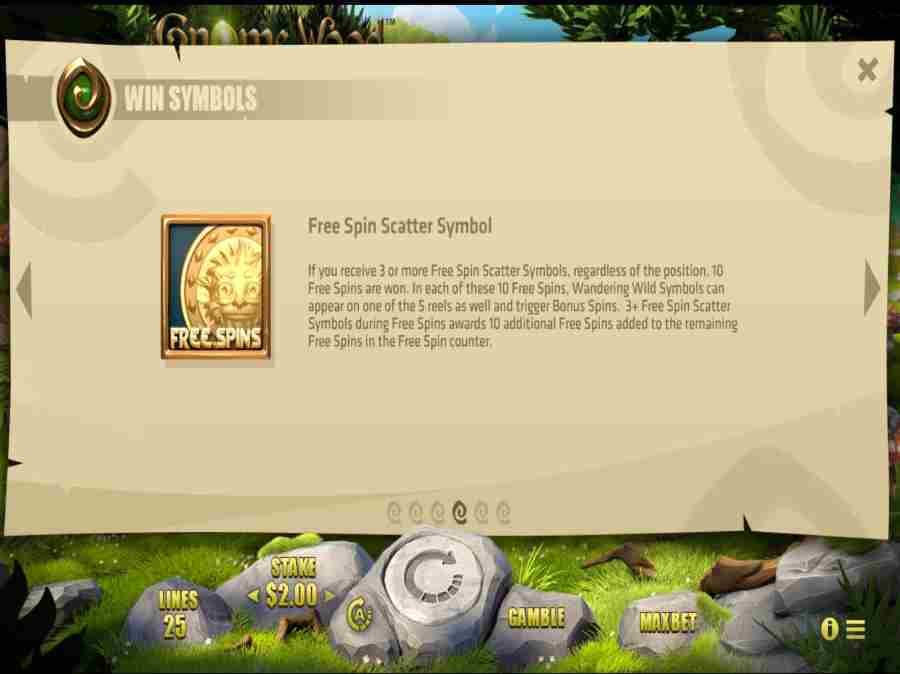 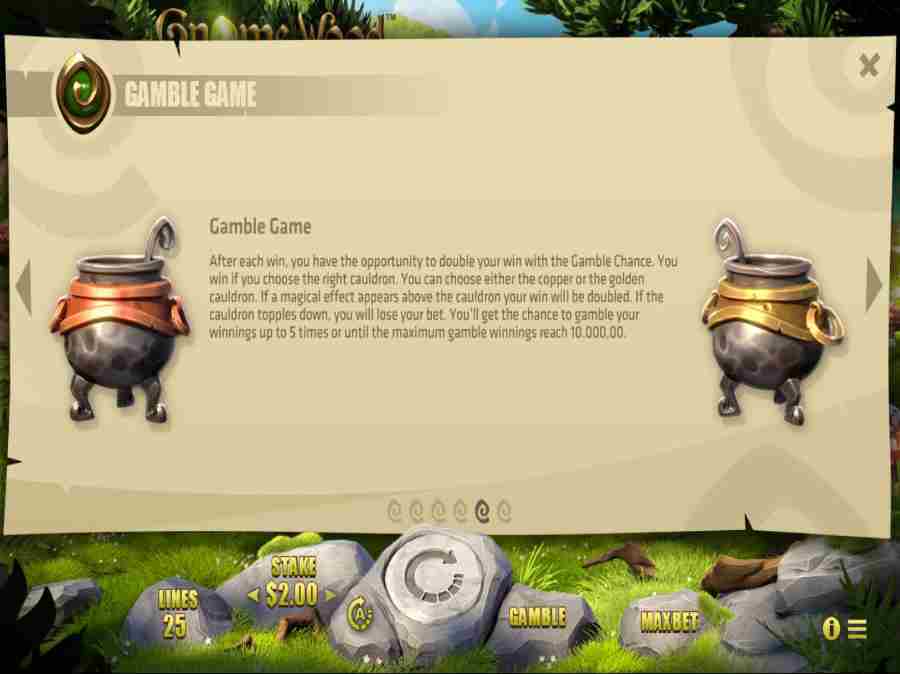 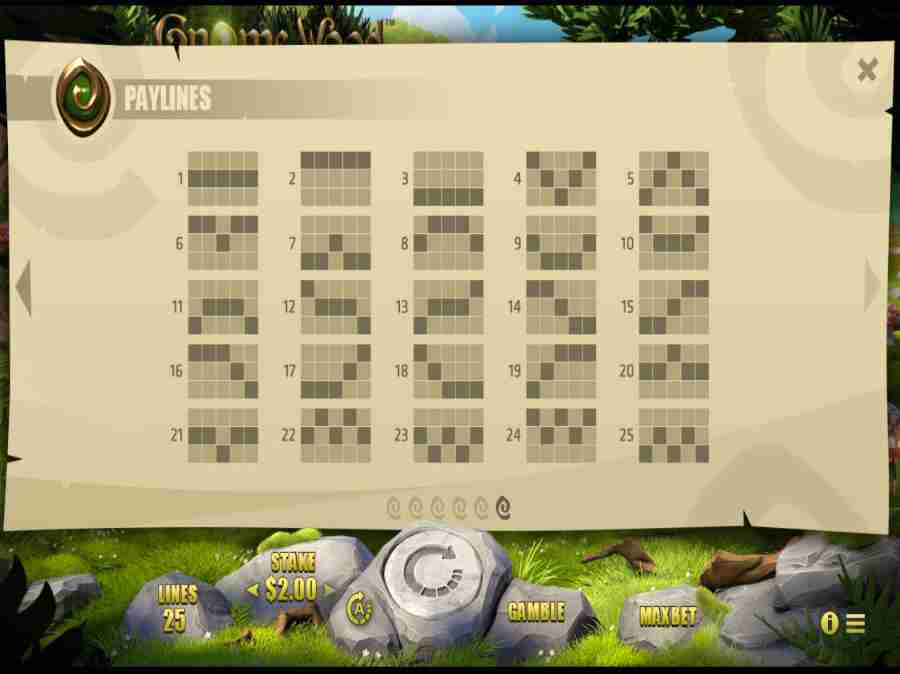 Gnome Wood is a 5 reel, 25 payline video slot game from Rabcat. it has a Medieval Fairytale slot theme and the game features an Expanding Wild Feature, Free Spins, Wild Symbols, Bonus Game. and has a maximum jackpot win of 40x your stack.