Go Bananas slots has a Safari theme which includes 6 Monkey’s and the various fruits they enjoy. It is a 5 reel game with 20 winning paylines which has been created by Net Entertainment using high quality 3D graphics.

There is a cartoony feel to the Go Bananas slots game and all the animals have been designed with a friendly look. All the colors used in the game are bright and vibrant which add to the sounds of a bongo drum which plays in the background to a Conga beat.

The 5 reels of the Go Bananas slots game are set within a wooden frame which is upon a small stage. Players will see trees and a bright sky in the distance to enhance the jungle atmosphere that has been created.

Explorers are on safari in the jungle in the Go Bananas slots game. To be met by the animals that they wish to capture. Each animal will award the player with a Wild Bonus Feature which are sure to entice players to ensure they are not left disappointed.

A further element which adds to the enjoyment of playing Go Bananas slots is when the Gorilla symbol appears on the reels. Then the player can watch it as it stomps across the screen after being found.

There are various fruit symbols which are used in the Go Bananas slots game. These are a Pineapple, a Plum, a Coconut, a Lime, an Orange, and a Banana Split Desert. Along with these players will find some Bongo Drums, a Monkey Money Clip, a Gold Monkey Statue, and a Pink Gem.

During the game players will find various animal symbols appear across the reels of the Go Bananas slots game. These all become a Wild symbol when they are spun and award the player with various chances to add to their winnings.

Only one Animal Bonus Symbol needs to be found anywhere during game play of Go Bananas slots. They will then provide the following feature for players to take advantage of:

When an Animal Wild is spun it will always ensure to create the highest paying winning line so the player can maximize on their initial wager. This is another feature which is included in the Go Bananas slots game.

This means that the Go Bananas slots game doesn’t have a Scatter, Free Spins, or a Multiplier. There are no Bonus Mini-Games, a Gamble Feature or a Progressive Jackpot to be found in this slots game either. However this doesn’t deter players of any level from enjoying what is available in this Net Entertainment release.

There are 20 winning pay-lines included in the Go Bananas slots game and players can place up to 10 coins on each should they wish to. The coin denomination begins at just $0.01 and only rises to $1.00. This makes the game popular with both high and low rollers who enjoy Net Entertainment online casinos.

A player of any level can take advantage of the fun atmosphere in the Go Bananas slots game. The cartoony animal symbols add to the games Jungle theme and provide 6 Monkeys to award players with Bonus Wilds.

Go Bananas is a fast paced slots game but there are few Bonus Features to distract players from the 5 reels as they spin. Yet the 6 Monkey Wild symbols that can be found provide numerous chances for players to add to their winnings. They can all change other symbols in different ways to create more winning combinations which then are included in the final jackpot amount.

Should players prefer not to be as interactive with the Net Entertainment software there is the option to set the reels to Auto-Play. This means that the game will continue automatically as set by the player. Either until a certain of spins have occurred, or until the wagered amount is met. It is a convenient benefit which is included in the Go Bananas slots game. 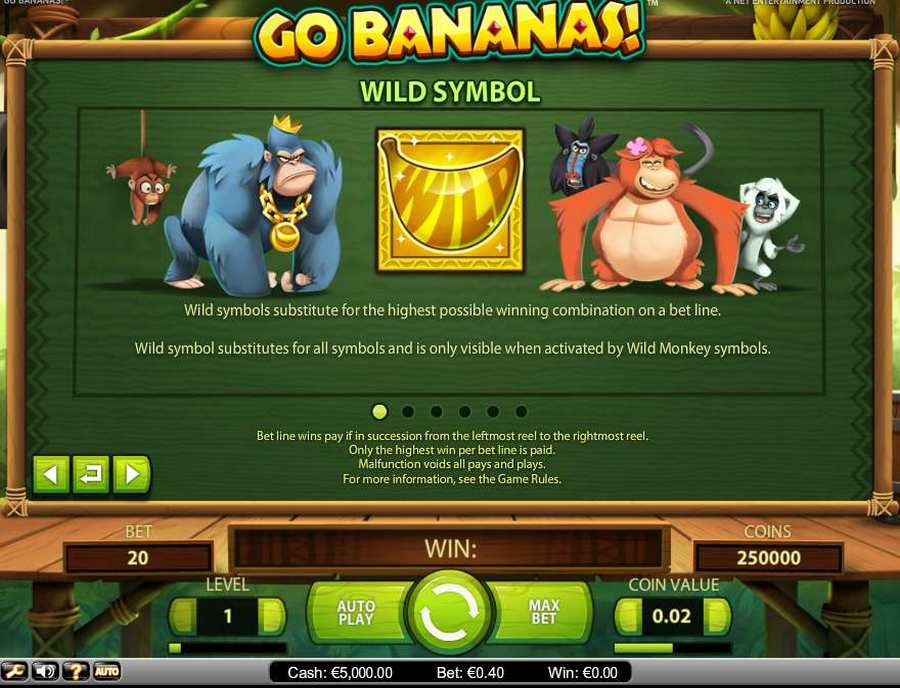 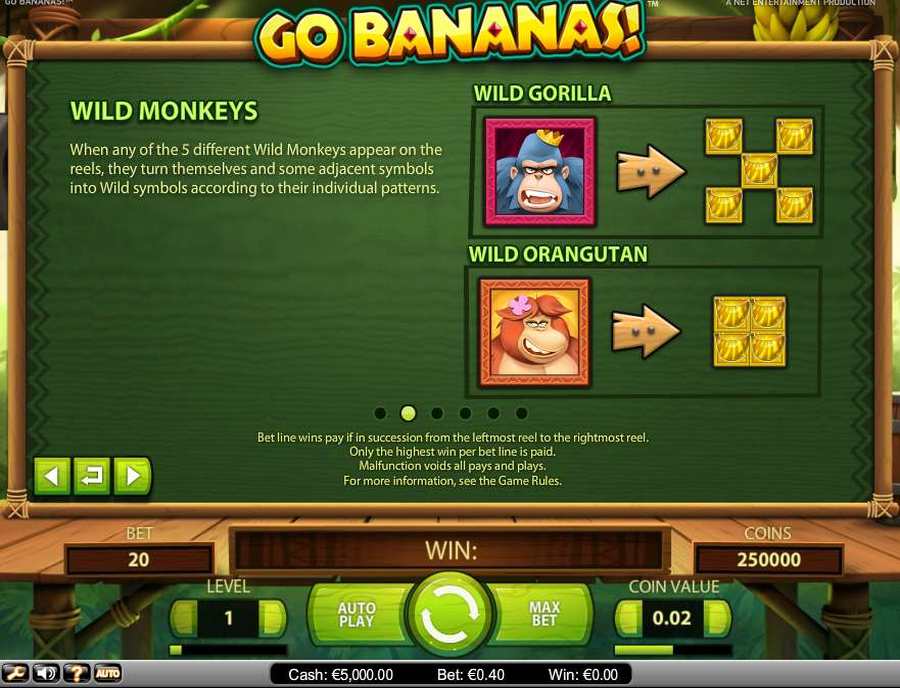 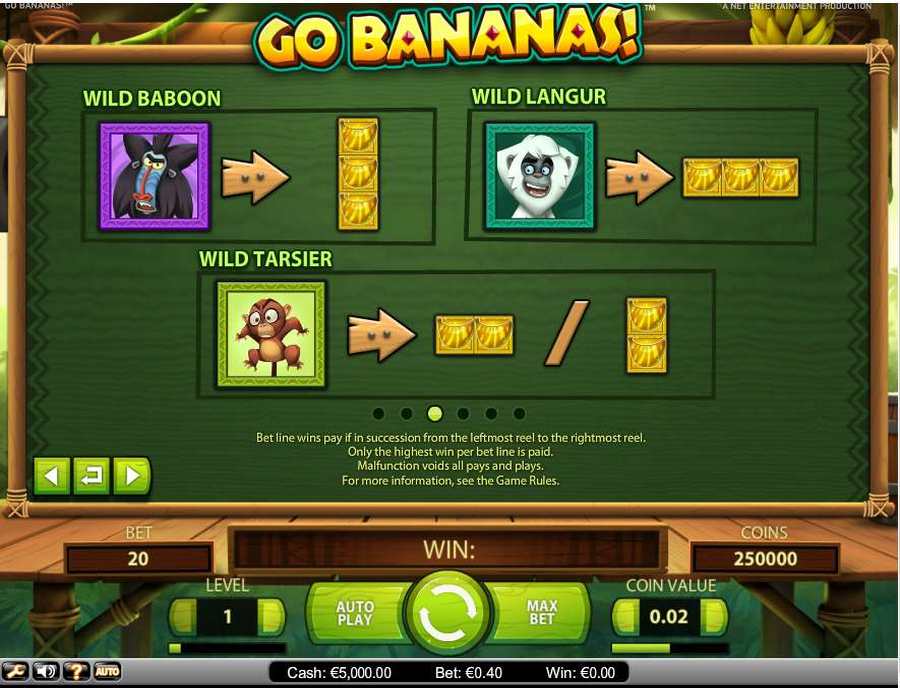 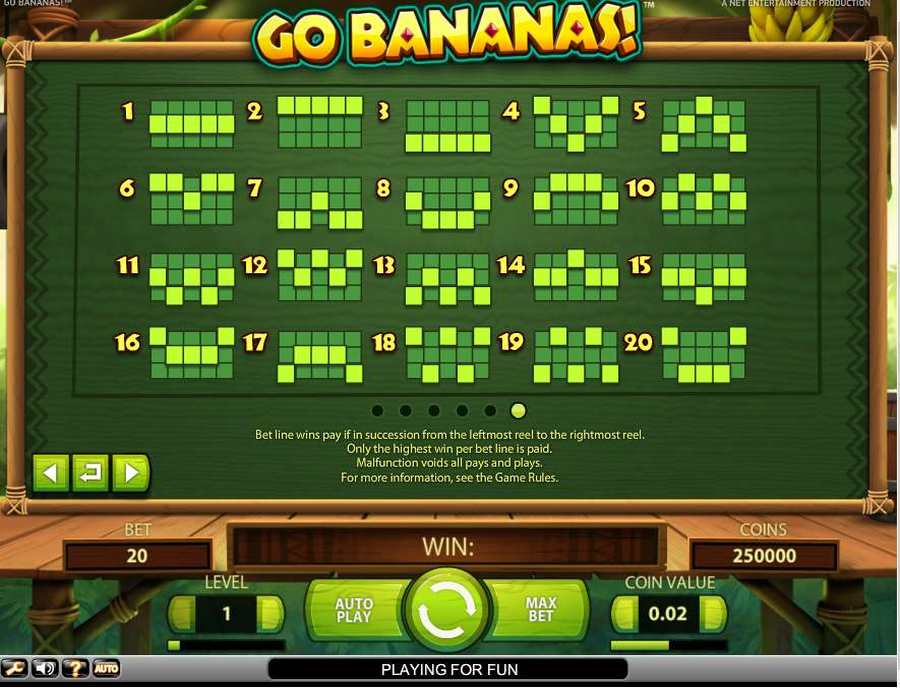 Go Bananas is a non-progressive 5 reel 20 pay lines 3D video slots game from Net Entertainment, it has a jungle theme, and comes with wild symbol and has a maximum jackpot win of $7000