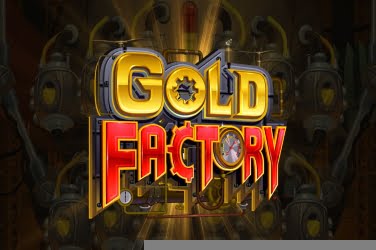 As suggested in this games title Gold is the theme for this creation from Microgaming. The rich flamboyant owner of the Factory is the main character and is joined by a Boy helper. Together they work in the Machine Room where the 5 reels can be found set inside some golden piping.

3D graphics have been used and although the symbols have a cartoony appearance bright bold colors fill the screen. There are also various fun animations which occur during gameplay when a winning combination is found.

Players can also enjoy the sound effects that have been included in this Microgaming online slots game. The cheers and applause with each win creating an atmosphere of being in a top casino.

Some of the symbols found upon the reels of the game are Transport related. Leaving players to tour the Gold Factory slots game in a Hot Air Balloon, a Submarine and a Train. Then there is a Wooden Cart of Gold, a stack of Coins, and a pile of Gold Bars to create more winning combinations. Final symbols include the games two male characters and an image of the Factory itself.

The games Logo is used as the Wild symbol and can be found stacked across all 5 reels. Other than the Scatter this can change icons to provide players further chances to add to their final jackpot balance.

A Gold Coin “Bonus” symbol activates the main Feature in this slots game. When 3 or more are spun players are taken to the Boiler Room on a 2nd screen. Here they are asked to choose 4 from 12 areas on the boiler to reveal a hidden prize.

One prize that players may be lucky enough to uncover is a Free Spins Bonus Round. The amount of spins that is given is selected at random and can be anything from 10x to up to 35x additional chances to increase the player’s initial wager.

This online slots game also provides players with the opportunity to take advantage of a Bonus Mini-Game. This is called the Reactor Bonus and is a “Pick Em” style game. Players will be shown lit areas of the reactor that they can select to receive cash awards. This Feature continues until the “Malfunction” symbol is uncovered at which point they are returned to the base game.

Some players may be disappointed that there is no Progressive Jackpot, however, there are numerous other Features to keep them entertained. Yet it is surprising that no Multipliers are included in its format as with usual Microgaming releases which may deter those who want to maximize on their betting amount.

There may be 50 winning paylines in this online slots game players are not required to place coins on all of them. Though regulars to casinos will be aware that if they wager the highest value allowed they will receive more of a return. This has been set to a maximum of 5 coins on any line at each spin.

With this in mind and to ensure the game will be appealing to both high and low rollers Microgaming have set the coin range from 0.01 to 0.10. They have also incorporated an easily adjustable selection option so that the player is in full control of the amount wagered and onto which line it is placed.

Players can watch the 5 reels spin as they hope to locate any of the winning combinations to see their balance increase. With the addition of the Wilds, Scatters and two Bonus Rounds even further opportunities can be taken advantage of throughout the game.

Some players may choose to select the Auto Play Mode that is available at any point during the Gold Factory slots game. But with its fast pace and numerous elements to add to the thrill many regulars to online casinos could prefer to be more interactive during play.

An Industrial Victorian feel has been given to this game and there is a luxurious and ornate appearance to its design. So players can sit back and take in all the action as the Factory Owner and his Boy Helper melt the Gold to make as much money as possible. All with the hope of increasing their own final jackpot amount. 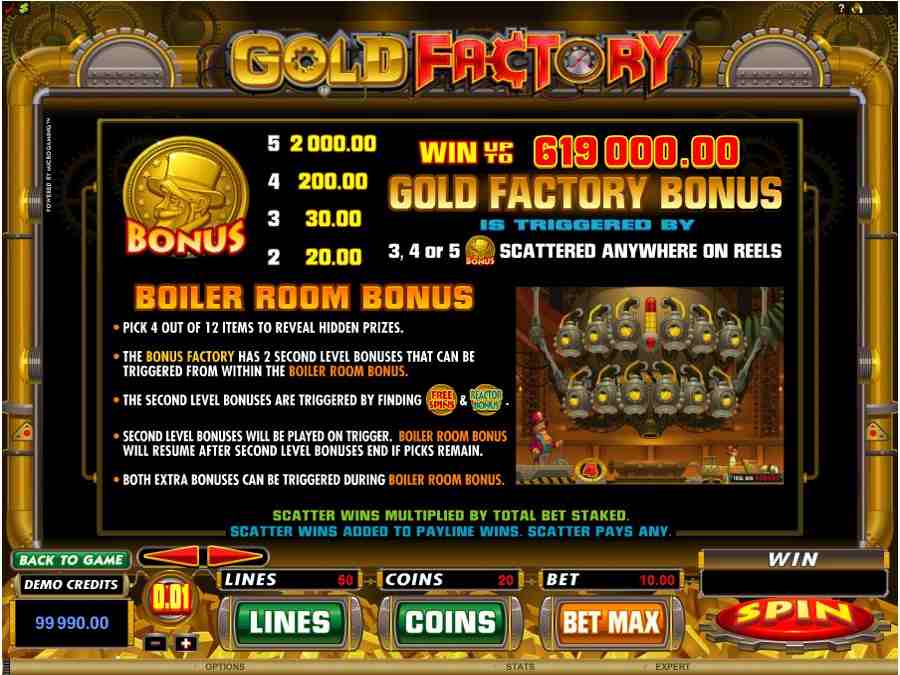 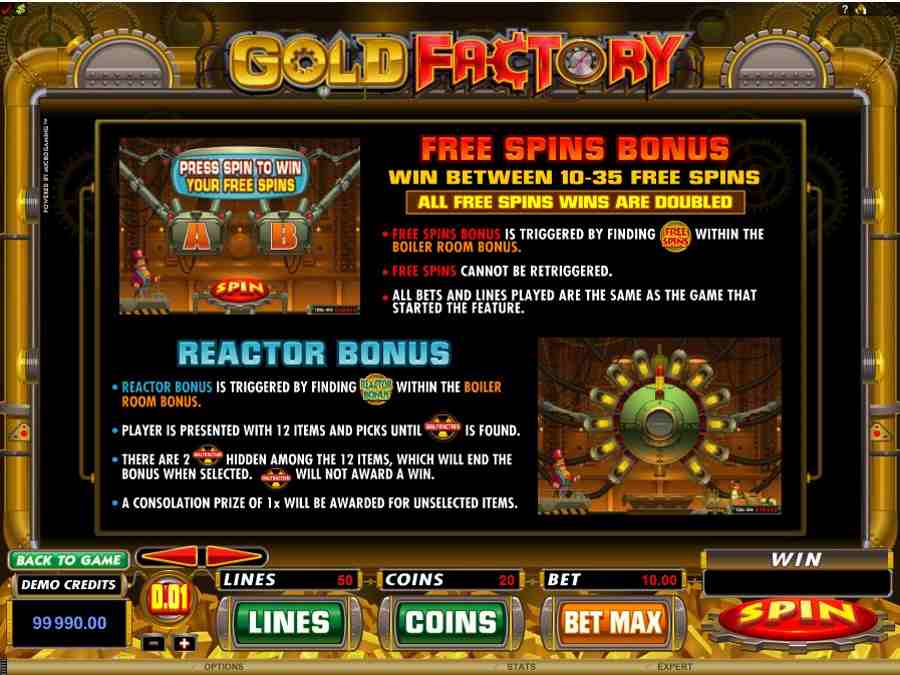 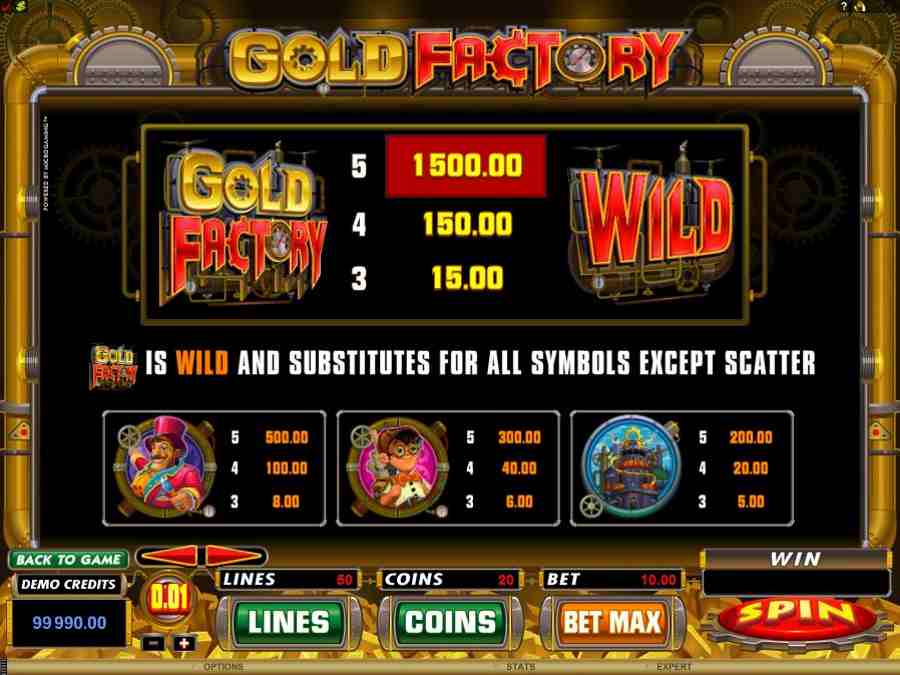 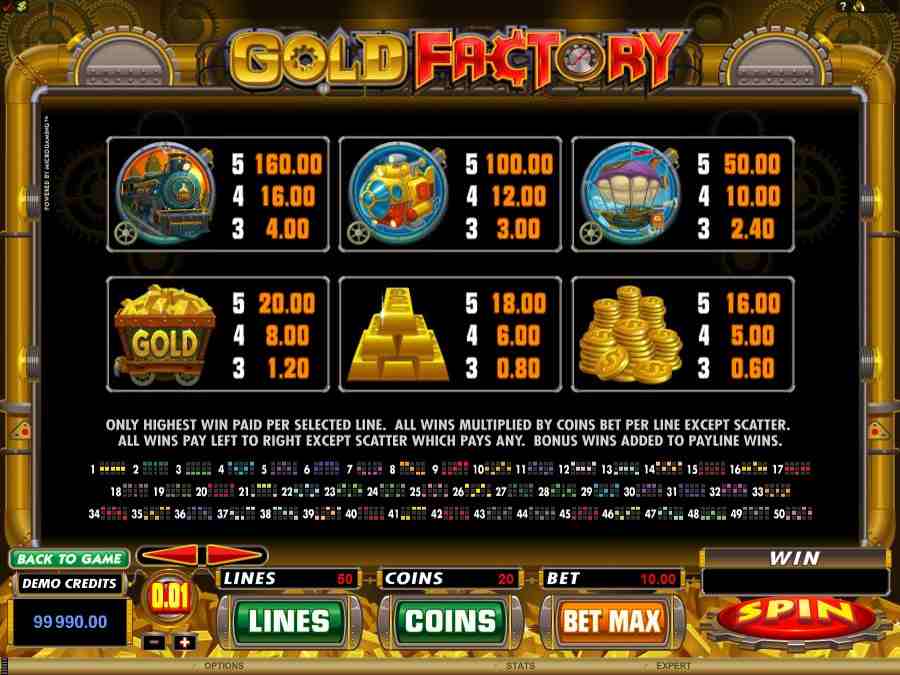 Gold Factory is a non-progressive 5 reel, 3 rows 9 pay-line video slot game from Microgaming, it has a gold mining theme, and features a wild symbol, scatter symbol, free spins and has a maximum jackpot win of $120,000