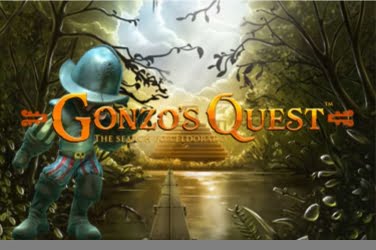 Players of Gonzo s Quest slots will find themselves joining the famous explorer Gonzalo Pizarro. The character Gonzo is on his quest to find the lost city of gold Eldorado, navigating his way through the Amazon jungle.

The 5 reels of the Gonzo s Quest slots game are set within the wall of Aztec pyramids. There are trees to each side and a bright blue sky at the top of the screen. Gonzo is shown to the left of the game and his figure begins to dance with each win which adds a fun element during play.

There is a different element to this online slots game which has been released by Net Entertainment. That is in the fact that the reels don’t actually spin, they are instead referred to as Avalanche Reels. This means that when players create a winning pay line they will see the symbols which were included explode and fall from the screen. All the spaces at the top of the reels are then filled with new symbols which can offer a further chance for the player to win a cash prize.

As with other Net Entertainment creations, there is a progressive Multiplier included in the Gonzo s Quest slots game. This can be as much as 15x the original amount that the player wagered and can provide a high return depending on the coin size being used.

All the symbols used in the Gonzo s Quest slots game are in keeping with its Mayan theme. They are shown as block carvings of icons from various South American cultures which have a detailed design. Each symbol is of a different color and is green, red, orange, purple, light blue, brown, and a darker shade of blue.

Gonzo s Quest slots have two Bonus Symbols. There is a Wild which is just shown as a ? and a Free Fall Scatter. The Wild provides the player with more opportunities to create a winning pay line as it can change other symbols on the screen.

However, when 3 or more Free Fall Scatter symbols appear in a line during the Gonzo s Quest slots game the player is awarded a Free Bonus Round. At this point in the game the player has is given 10x Free Falls of the reels which can create a winning combination to be included in their jackpot figure.

It is here where players can take full advantage of the Progressive Multiplier Feature. The meter is shown at the top right-hand corner of the screen in the Gonzo s Quest slots game. During the main base game, the Multiplier begins at 1x the wagered amount after the first win. This will then increase to a maximum of 5x each time a pay line is revealed.

Yet when the Free Fall Bonus Feature is in play the Multiplier is set higher. Then players can benefit from 3x, 6x, 9x, and 15x to be added in their jackpot figure. There is also the chance to re-trigger this Bonus Round should the Scatter symbol be found again.

There are 20 winning paylines to be found across the 5 reels of the Gonzo s Quest slots game. Players of any level can enjoy the game due to the coin size of $0.20 to $50.00 on each avalanche fall. Yet it is the Progressive Multiplier which proves popular with most players. With this, the jackpot can be increased by up to 15x the original wager, so this can create a significant payout if placing the highest amount available each time.

It is the Free Falls Scatter symbol which provides most Bonus Features in the Gonzo s Quest slots game. Not only can players be awarded 10x Free Spins (or Falls), they also receive a Multiplier to be included in their final jackpot amount.

Players also have the option to activate an AutoPlay feature in the Gonzo s Quest slots game. It is accessible through the control panel and means that the reels can be set to run automatically. This allows players to be less interactive with the game should they have other things to be doing at the time.

The Gonzo s Quest slots game may be rather slow paced for some regulars to Net Entertainment online casinos. However, it still allows players with plenty of opportunities to add to their winning amount. Gonzo s Quest slots give players a basic game but with 3 Bonus Features which still make the game appealing. 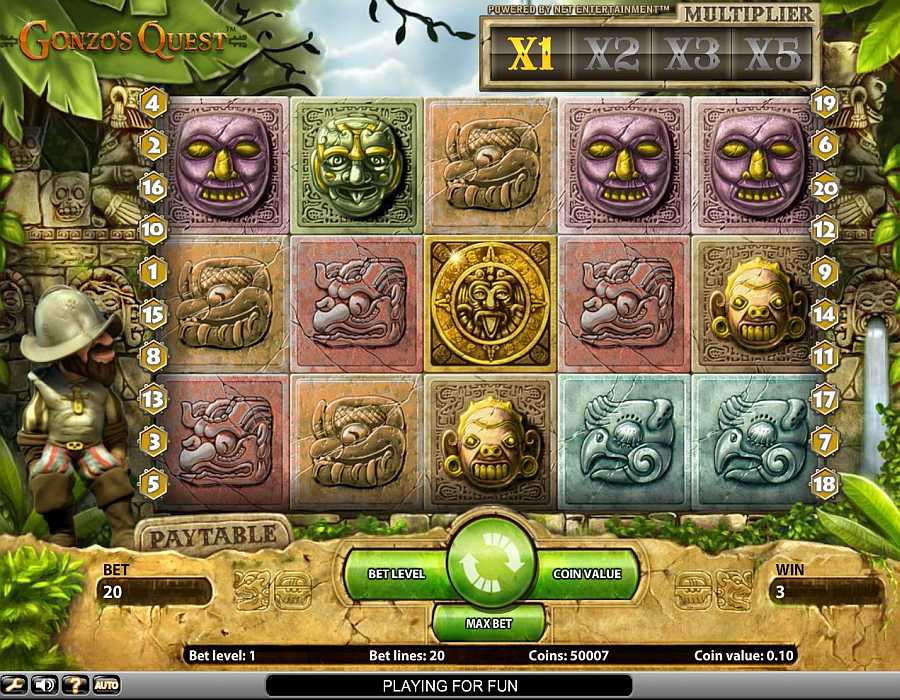 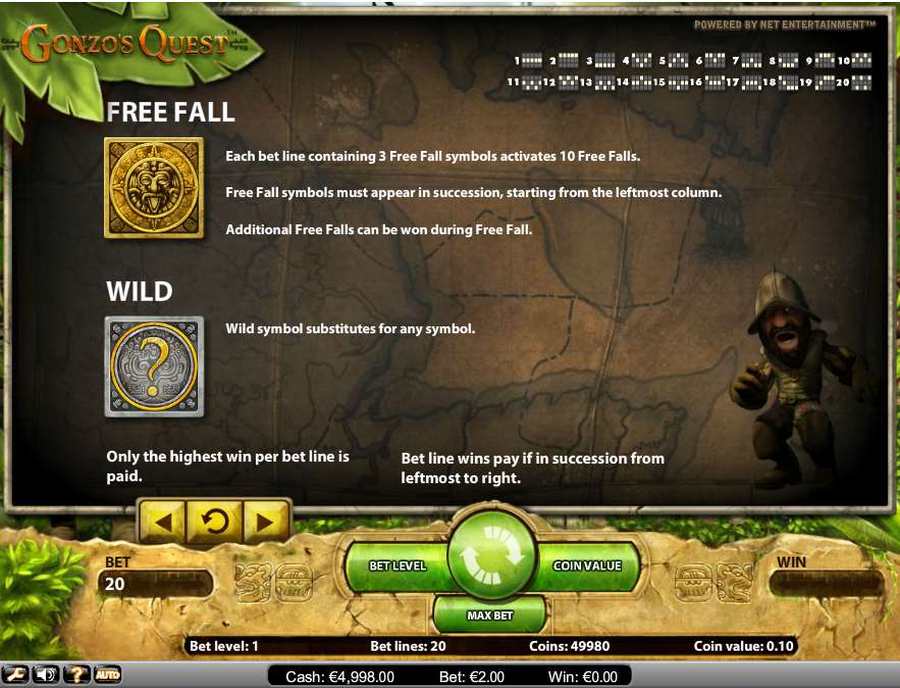 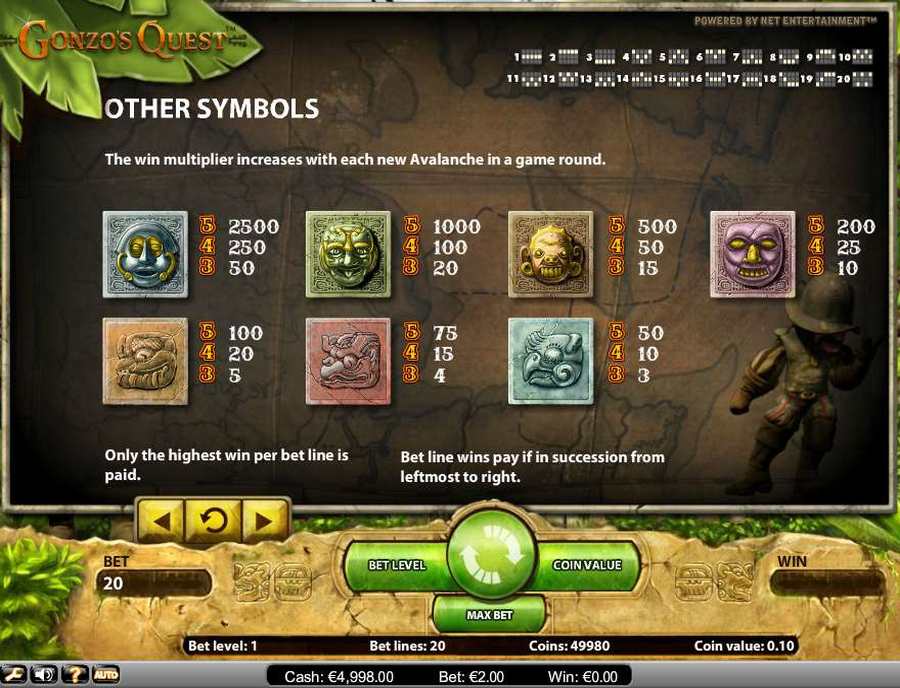 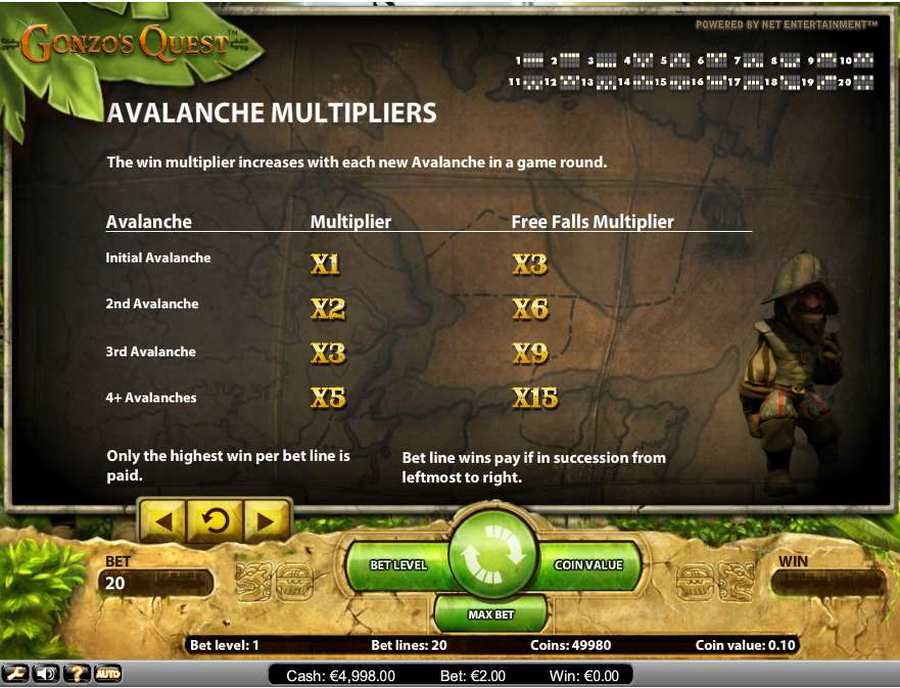 Gonzos Quest is a non-progressive 5 reel 30 paylines 3D video slots game from net entertainment, it has an Aztec pyramids theme, and features a multiplier, scatters symbol, wild symbol, free spins and has a maximum jackpot win of $62500