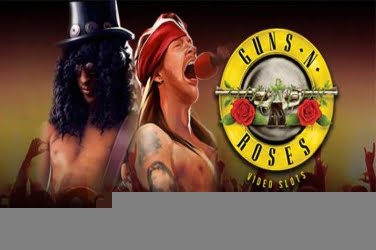 Based on the Rock Band of the same name this is a Net Entertainment creation that was released in January 2016. The 5 reels are set within a floodlit stage and there is a cloudy sunlit sky shown at the top of the screen. Below the reels players will find the crowd which becomes animated, cheering and jumping up and down after each win. It is something which adds to the Rock Concert atmosphere that players can enjoy throughout the game.

During the game, the player can choose their favorite track from the list that is provided. Or alternatively by pressing the “Set List” button at the bottom of the screen they can enjoy all of the 5 provided. The sound of the music is crisp and clear and players can also take advantage of the clips from the bands live shows that have been included in the game’s design.

This is an online slots game that is available on all Mobile devices and so can be accessed at any time by players who want to engage in its smooth and entertaining format. During the Guns and Roses slots game, the player can access the AutoPlay feature that has been included. Allowing them to set the reels to spin automatically if they have other things to do. However, with the concert clips and music that will evoke happy memories for any Rock fan, there is definitely plenty to keep players entertained

Although the symbols of the band members are not real, life they have been intricately designed using high-quality detailed graphics. Players can find Axl Rose, Slash and Duff McKagan upon the games 5 reels.

Other symbols include 2 differently colored Plectrums and shiny golden 10 to Ace icons which are decorated with red roses.

The games Logo acts as the Wild symbol and can be found stacked across all 5 reels. When it is spun it will expand to create more winning combinations for the player to take advantage of.

A Record is a Bonus symbol within the game but it will only appear on the 1st, 3rd, and 5th reels. However, should all of these be revealed then the player will be asked to spin a Bonus Wheel to collect 1 of 3 additional Features.

The 1st of these is called Encore Free Spins where the player is awarded 10x extra moves to help increase their jackpot balance. During this round, a Band Member will also appear as an Expanding Wild on either the 2nd, 3rd, or 4th reel with each spin.

Crowd Pleaser is the 2nd Feature which players can receive to increase their winnings. This is a Pick ‘Em style game which has 3 levels. However, to move through these a minimum amount of coins must have been won. With 3 choices each time this can easily be achieved and there is also the chance of receiving 10x Free Spins if these Bonus symbols are located.

Finally, the Bonus Wheel may simply give a Coin Win with the amount is shown being added to the player’s balance at that point in the Guns and Roses slots game.

There is also an Appetite for Destruction Wild symbol which is only found on the 3rd reel of this online slots game. It is depicted as a large cross with skeleton images of each of the Guns and Roses band members. When it appears it can change other symbols besides the Bonus icons to create more paylines.

Legend Spins is a Bonus Feature which will be awarded at random throughout the game. Here players will be given an additional 3x Free Spins which offers stacked Wilds each time. On the 1st spin the Wild symbol will be on the 3rd reel, moving to the 1st and 5th on the 2nd, and then to the 2nd and 4th reels for the final time.

Another random event can also occur at any point when a winning pay line has been revealed. This is the Solo Multi and can award a Multiplier of 4x to 10x to be added to the player’s payout amount

Net Entertainment has set the bet amount to a maximum of 200.00 in this online slots release. By using coin denominations ranging from 0.01 to 1.00 to be placed on the 20 winning paylines there are plenty of options for players of any level. And although a wager must be laid on each of these it still means that the lowest wager is just 0.20 which is appealing to those who are a little less daring.

There are various Bonus Features that have been incorporated into the game’s format to entice players to this Net Entertainment casino release. And with its Rock Concert theme, any fan can enjoy the Guns and Roses slots game. 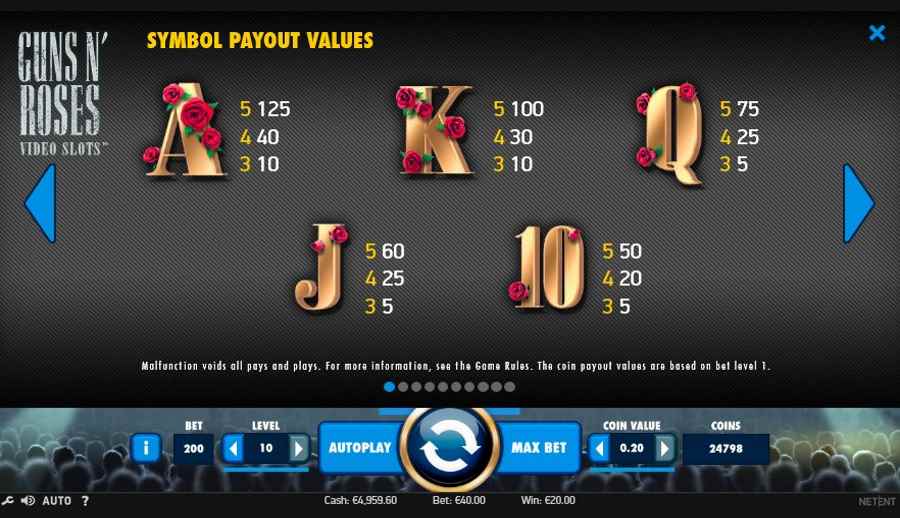 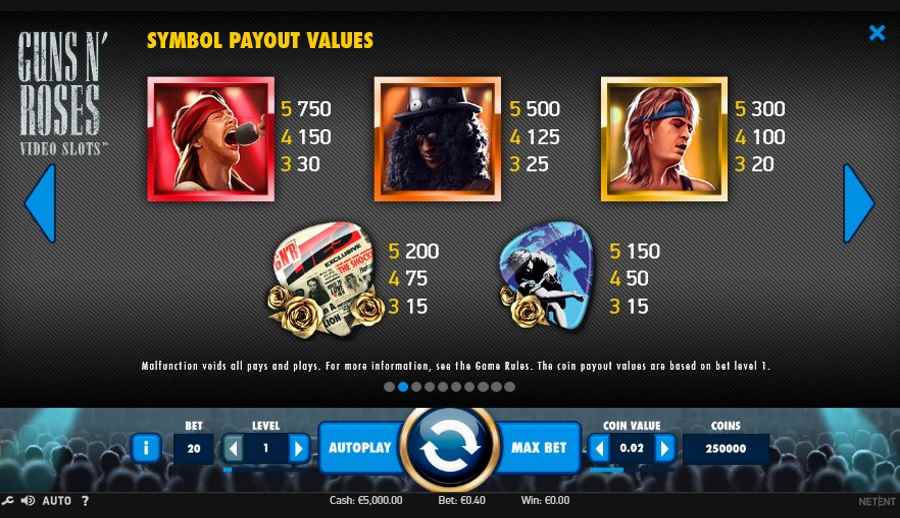 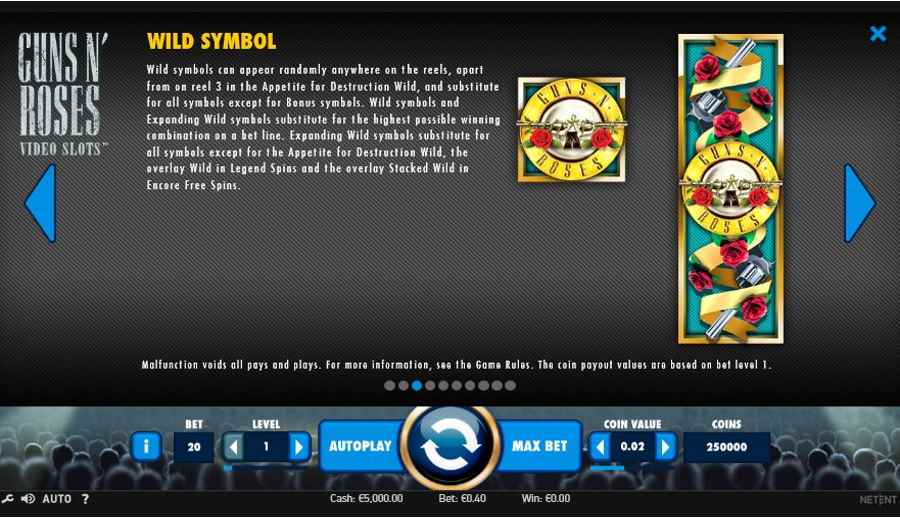 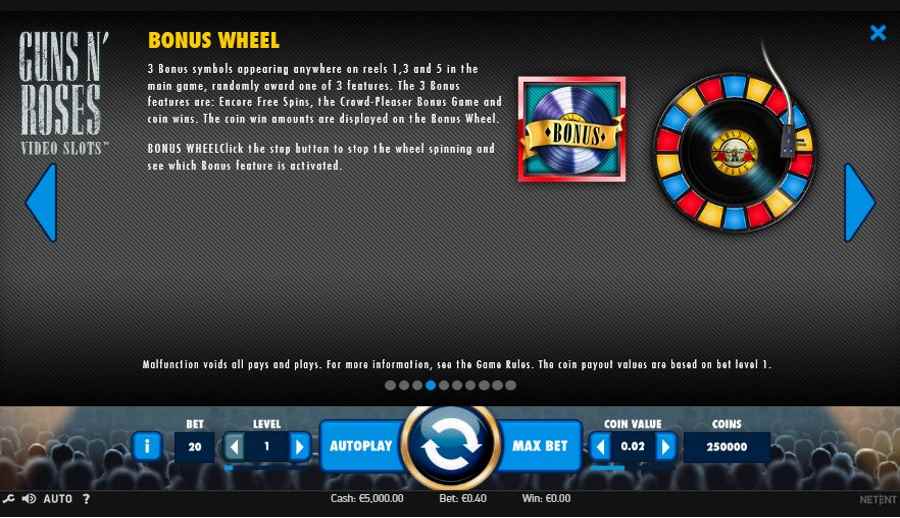 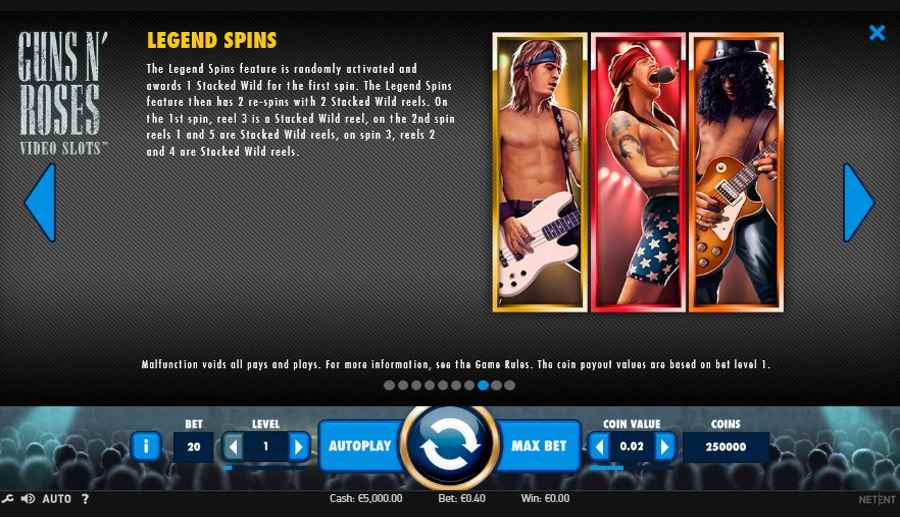 Guns n’ Roses is a 5 reel 20 paylines video slots from net entertainment, it has a American rock band theme, and comes with a Scatter, wild symbol, Multiplier, free spins and has a maximum jackpot win of $7500