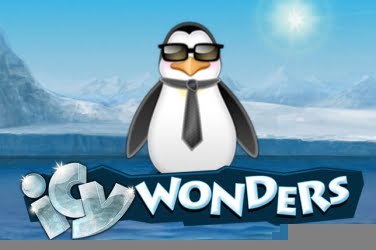 Icy Wonders slots is a Wintery themed online casino game which has been released by Net Entertainment. It is 1 of the 3 “Wonders” games included along with their Geisha Wonders and Tiki Wonders slots creations which can now all be found in their many online casinos.

The game design makes players feel that they are within a block of ice as they view the icy scene. Stalagmites and stalactites separating the 5 reels which are encased in an elegant frame.

Although there is a cartoony look to the characters used in the game, it provides players with a relaxing atmosphere as they watch the reels spin. Able to take advantage of all the Bonus Features that this online casino game has to offer.

Available since 2008 the Icy Wonders slots game can be played on PC, Tablet, and Mobile devices. This makes the game accessible to players from around the globe no matter where they may be.

With many online casino games the lowest paying symbols are shown as Jack, Queen, King, and Ace. These are shown within an ice cube to keep with the frozen feel of the game.

Players will also find a friendly looking Walrus, a Husky Dog, an Igloo, and a cheery Polar Bear holding a fish.

A smiling Whale is used as the Wild symbol in the Icy Wonders slots game and can change other symbols to create a winning combination. This is when players will see the character become animated, spinning around while spraying water from his blowhole.

The Whale Wild also awards players with the highest jackpot amount should all 5 symbols be spun. At this point players will see a total of 7500 coins added to their pay-out balance.

There is a dark-haired Eskimo Girl which acts as a Scatter in this Net Entertainment slots game. When 3 or more of this symbol is located across the games reels then a Free Spins Bonus Round is activated. The amount of spins awarded depends on how many were revealed.

For example 10x Free Spins are given when 3x Scatter symbols are found during the game of Icy Wonders slots. This increases to 20x and 30x respectively to allow players with even higher rewards.

During the Free Spins Bonus Round any winnings will receive a 2x Multiplier. And there is the additional chance to re-trigger the more spins at any time during the game. Both features adding to the thrill while players watch their pay out balance increase.

A cute Penguin wearing a red hat is a Bonus Symbol which can be found on the 5 reels. When 3 or more of these are found then a 2nd screen will appear to players. Here they are asked to choose from the Penguins to reveal a random cash prize. This round continues until a Fish Skeleton is uncovered and the player will then be returned to the main game.

There are 2 Progressive Jackpots which can be claimed in the Ivy Wonders slots game. The lowest of these is the “Wonder Jackpot” which is paid when 4x Star symbols are spun during play.

However, if the player is lucky enough to find 5x Star symbols then they will receive the balance of the “Mega Wonder Jackpot”.

Bets can range from 0.01 to 60.00 in this 30 payline 5 reel game from Net Entertainment. Players do need to be made aware that they need to place the maximum wager if they wish to have a chance of winning the 2x Progressive Jackpots.

This is a factor which can prove appealing to high rollers, as low rollers will appreciate the flexibility which is offered while playing the Icy Wonders slots game.

In addition to this there is a Wild, a Scatter, Free Spins, a 2x Multiplier and a Pick Me Bonus Round. All adding further fun and chances to create paylines while playing Icy Wonders slots to increase a gamers final winnings.

It is possible to play the Ivy Wonders slots game in Free Play. Yet players should note that they will be unable to claim either of the Progressive Jackpots unless they are in Real Money mode.

Auto Play is also available in the Ivy Wonders slots game which means that certain settings can be altered to each player’s preference. This includes volume levels and allowing the reels to spin while the player is away from the screen.

There is much on offer in the Ivy Wonders slots game, and players of all levels can enjoy the thrill as they watch their jackpot balance grow. 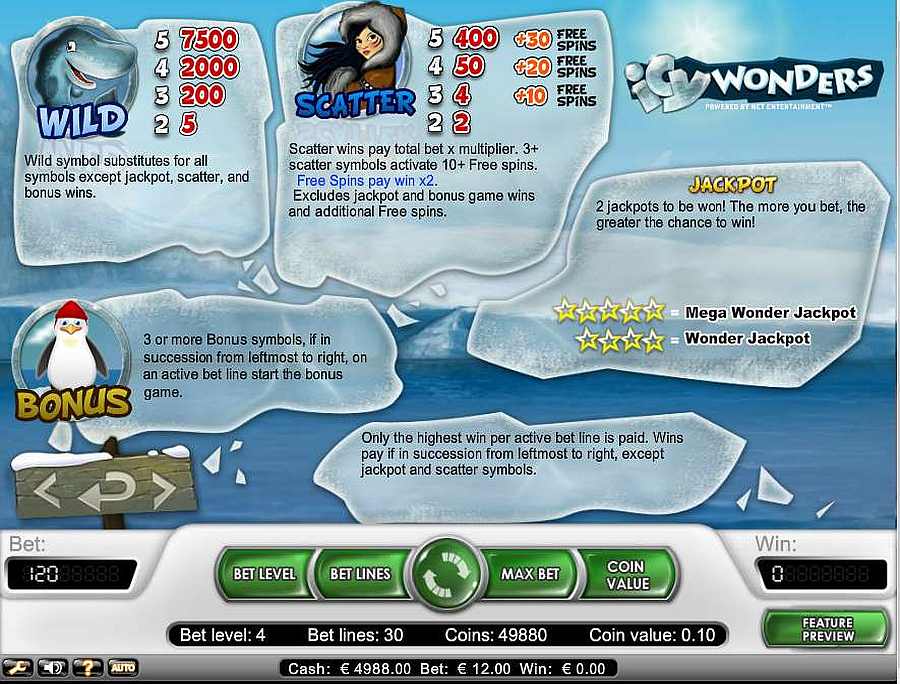 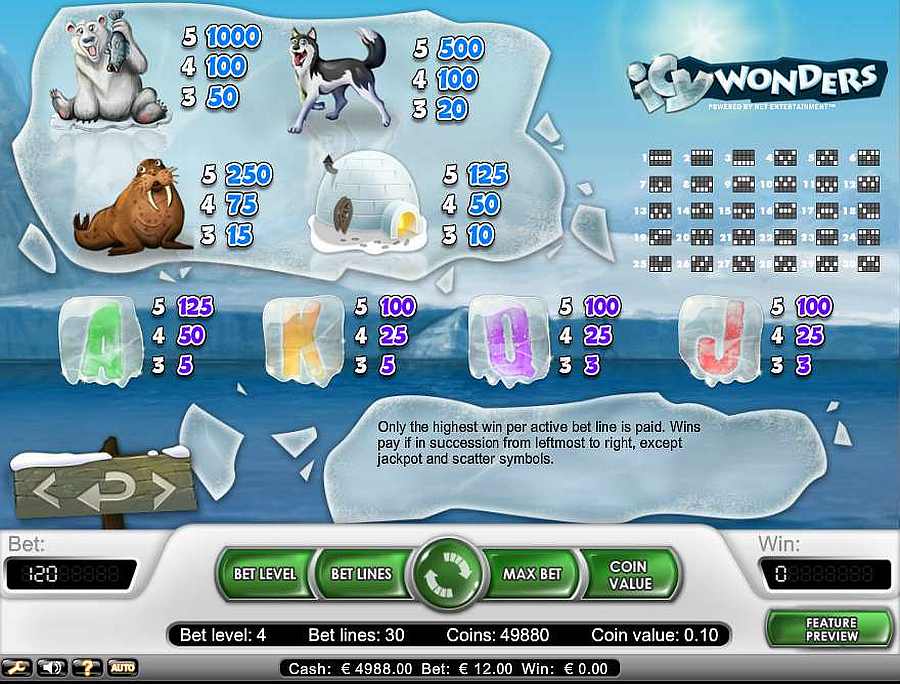 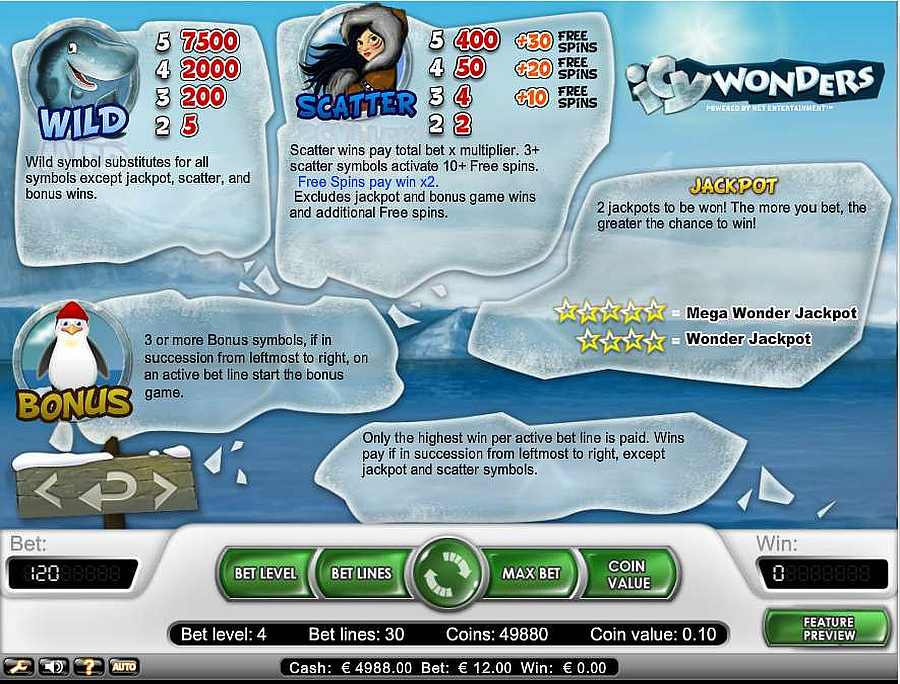 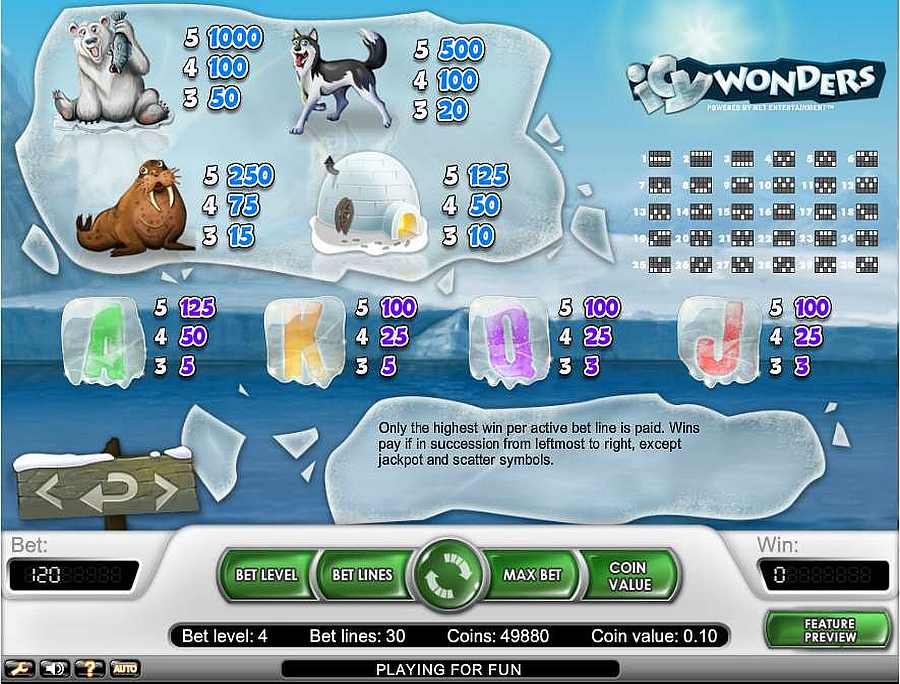 Icy Wonders is a non-progressive 5-reel, 30-line, multiple coin video slots from net entertainment, it has a winter theme, and comes with a scatter symbol, wild symbol, free spins and has a maximum jackpot win of 48000 coins