Jewels Of The Orient Slots Review 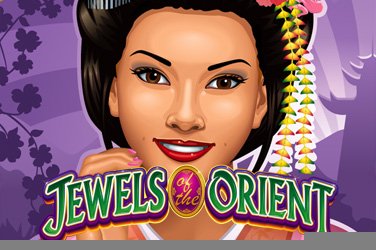 The “Jewels” in this online slots game are not just the gems that are found upon the 5 reels, but also the female characters that have been included within its design. Microgaming have used detailed graphics and there are also fun animations when a winning combination has been created.

A red frame with gold corners encases the reels with a darkened scene of various monuments shown in the distant background. To the top of the screen, players can see the rays of the sun beginning to light the morning sky while there is soothing Oriental music playing throughout the Jewels of the Orient slots game.

Jewels Of The Orient Slot Features

In keeping with the game’s theme all the different ladies are clad in their native clothes. Each outfit is a different color to indicate the country where they are from. There is a lady from India wearing Blue, Orange is for Thailand, Pink Japanese and the lady wearing Green is Korean.

The Chinese female character is a dressed in Red and she also offers players with the 2nd Jackpot of the game. When all 5 reels are filled with this symbol an additional 800 coins are added to the player’s final payout amount.

Other lower paying symbols include a Green Pot filled with Gems and a Jewellery Box. Both of these are brightly colored and show an ornate Oriental motif upon them.

An intricately detailed Logo symbol is the games Wild and can be found stacked across all 5 reels. Just 2x of these need to be spun for players to receive a standard pay-out amount depending on how much they initially wagered. However, should a player be lucky enough to reveal all 5x of the Logo Wild then they will bank the main jackpot of 2500 coins!

In addition to this, the Wild symbol can also change any other on the screen, apart from the Scatter. This gives players the chance to create more winning paylines to help increase the final balance for them to claim.

A Chinese Palace complete with surrounding Cherry Blossoms trees is the Scatter symbol in this slots game. This will activate a Free Spins Bonus Round but what the player will be rewarded with is reflected by how many were uncovered on the reels.

Here players will see 3x Oriental Gentlemen appear on the screen, each offering the player with a gift. Which one they choose will define the amount of Free Spins, the Multiplier, and the Coin Bonus that players can then take advantage of.

For example, 3x Scatters will allow 10x – 15x Free Spins, along with 5x – 25x coins. 4x awards players with 15x-20x additional spins and 20x-100x coins. Finally, 5x Palace Scatters gives 20x-40x Free Spins and 50x-120x coins to be included in the player’s balance. All winnings at this point in the game are also given a randomly chosen 1x-5x Multiplier.

It is this Bonus Round that is the main Feature in the Jewels of the Orient slots game which may disappoint some players who prefer a faster-paced game. However, this level can last for quite a while and is something that can prove lucrative in adding to the player’s initial wager

Jewels Of The Orient Game Play

There are 5 reels and 9 winning paylines in this online slots game from Microgaming. Even so, they have kept the coin denominations set from 0.01 to just 0.25 so making it appealing to low rollers. Though high rollers can still take advantage of the 20 coin maximum that is allowed on each and with all 9 lines in play this can increase the player’s winnings even further.

Wilds, Scatters, Multipliers, and a random Coin Bonus can all be enjoyed in this casino game. Yet with no Progressive Jackpot or Mini-Games to enhance play it may not prove popular with those who are more familiar with Microgaming releases.

It is possible for players to activate the Auto-Play Feature which has been included in the game. This means that the 5 reels can be set to spin automatically for a certain amount of times, or until the maximum wager is reached.

Players are also able to alter the speed in which the reels spin when in Expert Mode, something that allows them full control throughout the game.

Providing an Oriental theme and numerous opportunities to add to their winnings, Microgaming online casinos have created a slots game that is proving popular with players of all levels from around the globe. 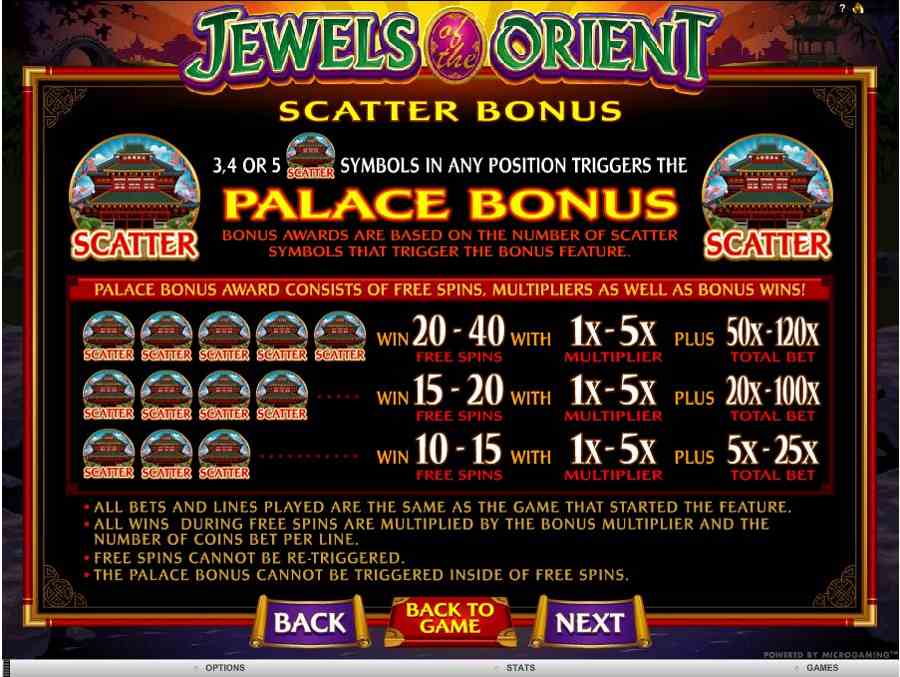 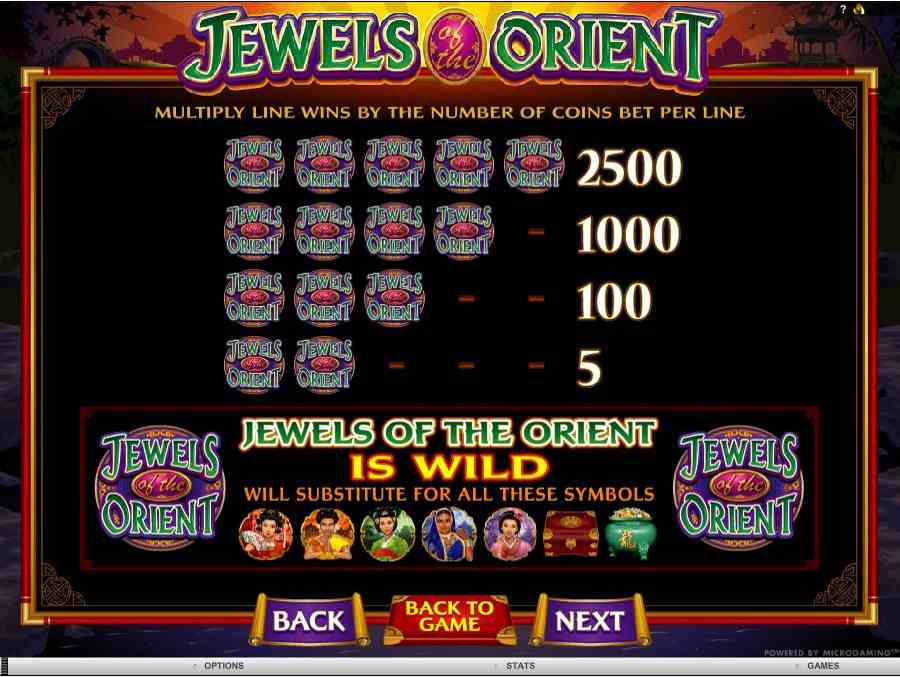 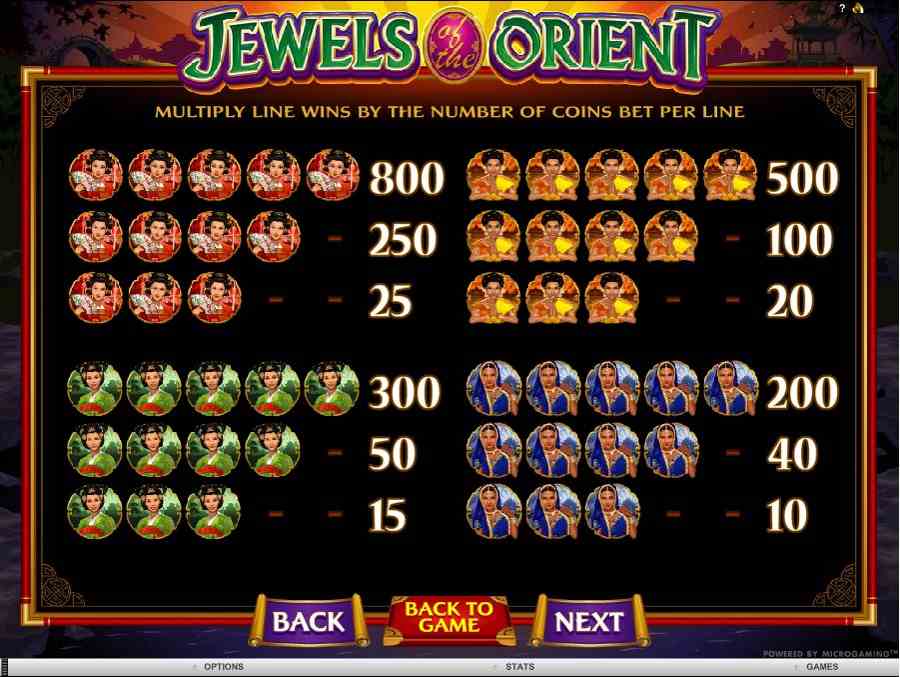 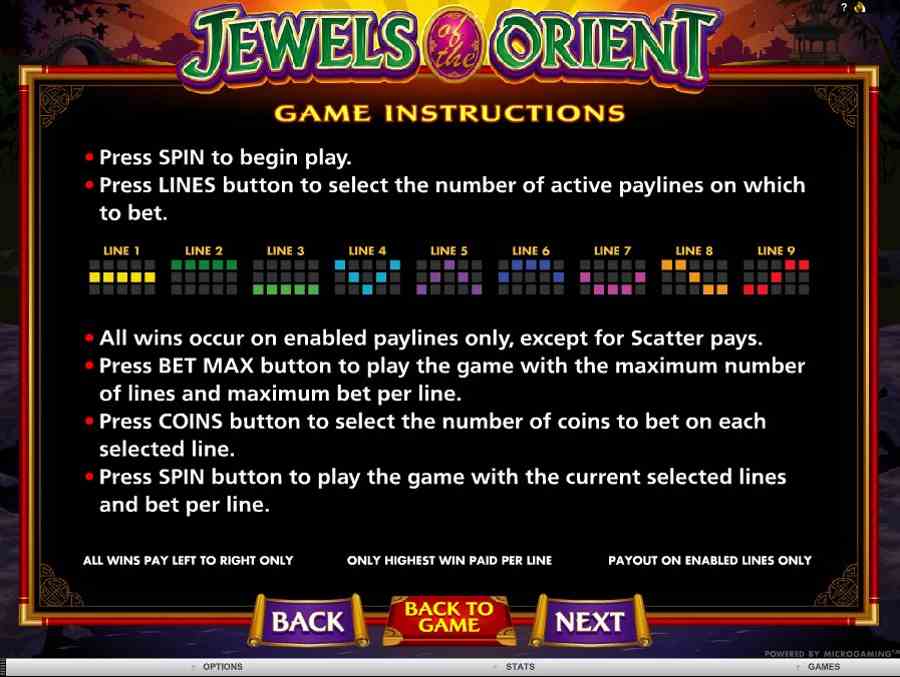 Review Breakdown Jewels Of The Orient

Jewels Of The Orient is a non-progressive 5 reel 9 pay-line video slot game from microgaming, it has a Oriental theme, and comes with a wild symbol, scatter symbol, Multiplier, free spins and has a maximum jackpot win of $12,500