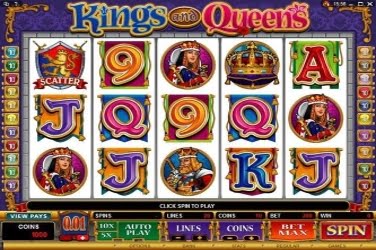 This online casino game was released by Microgaming in March 2009. It is one of the many 5 reels, 3 row slots games that can be found in their casinos. Players can bet on the 20 pay-lines that are a feature of the Kings and Queens slots game.

Using coin sizes from 0.01 to 0.25, a low maximum bet amount of 100 coins is set on the Kings and Queens slots game. However with Wilds, Scatters and numerous bonus rounds there are plenty of opportunities for players to win larger amounts.

A Royal Shield is used as the Scatter symbol in the Kings and Queens slots game. When three or more are spun upon the games reels, the Free Spin Bonus Round is activated. During this time, players can find Wilds which can change other symbols to create more winning combinations.

There are actually two Wild symbols in the Kings and Queens slots game. The one in the base game is depicted as the games logo icon. While the Wild that appears during the Free Spins round is shown as a Treasure Chest which can give players even larger pay-outs.

Though there is not a progressive jackpot in the Kings and Queens, there are many ways to win with the games 20 pay-lines. The Scatters that are shown by the Royal Shield symbol are used to generate the Free Spins round. Here players are given not only 10 additional spins, but also an x8 multiplier on all winnings.

The Wild symbols that are a feature of the Kings and Queens provide players the chance to create more winning lines. They can change any symbol, other than the Scatters. When a set amount of these appear across the 5 reels of the game, a Royal Treasure Chest allows players to add to their final pay-out amount.

Another feature of the Kings and Queens slots game is the Gamble Bonus Round. This appears through the games Logo icon and shows a down faced card on the screen. Players can then opt to Gamble their current winnings by either guessing the color or suit of the card. If the color is correct, the pay-out will be doubled. This is quadrupled if the suit is guessed accurately. However, if the wrong answer is given, all winnings are lost.

( Now available on mobile version ) When a player first begins the Kings and Queens slots game they are required to wager up to 100 coins across the 20 pay-lines that this Microgaming online casino game offers. The coins that the game uses range from 0.01 to 0.25. This doesn’t make the game as popular with those who wish to gamble higher amounts.

By using the Scatters, Wilds and Free Spins there are many ways to win with this game. There is also the Gamble Bonus Round that can increase the final pay-out significantly with the chance to double or quadruple the winning amount. Along with the x8 multiplier that the Free Spins allow, jackpots can grow even further.

The highest jackpot that the Kings and Queens slots game offers is 6000. However this does drop to just 2000 for the second jackpot amount. Regardless of this, many players enjoy the Royal theme of the game and the additional features that it provides.

With the Kings and Queens slots game players can also use the Expert Mode facility. This allows them to set the game to spin the reels automatically through the Auto Play feature. The game can be set to spin a certain amount of times, or when the wager amount is met.

Since its launch, the Kings and Queens slots game has become popular across many of the Microgaming online casinos. With low wager amounts, and 20 winning pay-lines this slots game can generate many winning combinations during game-play. 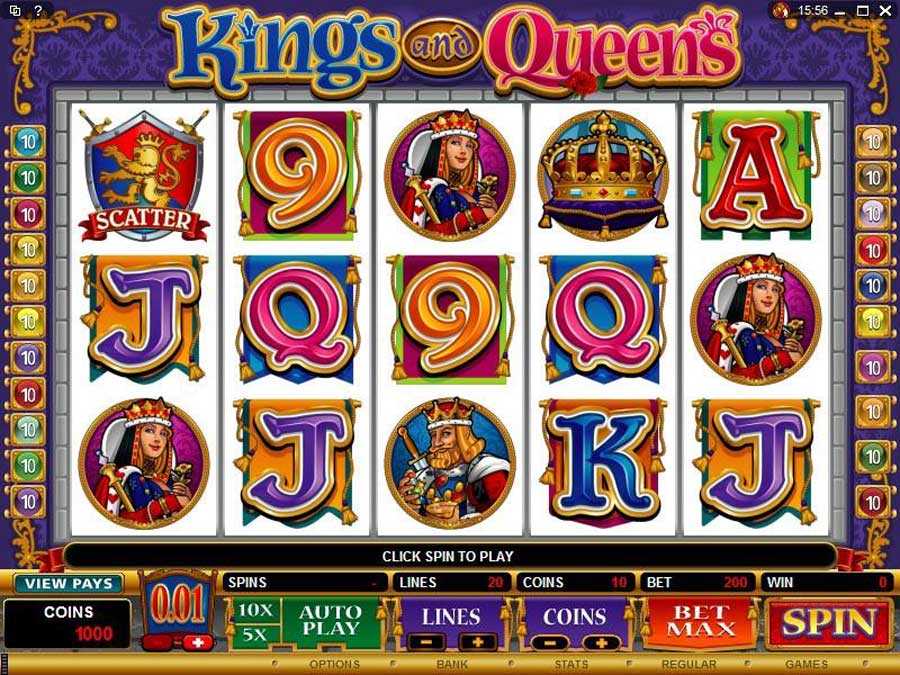 Kings and Queens is a non-progressive 5 reel 20 pay-line video slot machine game from microgaming, it has a Royal Family theme, and comes with a wild symbol, scatter symbol, multiplier, free spins and has a maximum jackpot win of N/A