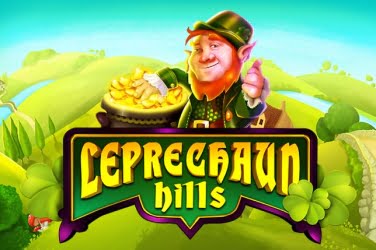 St Patrick’s Day is the inspiration for this Irish themed slots from Quickspin online casinos. It was released in March 2017 with 5 reels and 40 winning combinations. And if players are blessed with the “luck of the Irish” then they can expect some big wins with this slots game.

The rolling hills of the countryside set the scene while the reels can be found rimmed with gold. A deep green is the background color of the clear reels but the medium value symbols are within an ornate gold frame. All the graphics look striking whether a Desktop, Tablet or Mobile device is being used to access the game. And there is also some catchy Irish music that can be heard throughout play which adds to the fun atmosphere.

Players can join the Leprechaun as he hunts for his Pot of Gold at the end of the Rainbow and with all the Bonus Features that are on offer, there are plenty of chances to increase on their initial wager during the Leprechaun Hills slots game.

Traditional 10 through to Ace symbols will reward players with a small payout if they are included in a winning combination. They appear boldly across the screen in a Gaelic style font to remain in keeping with the game’s theme.

Medium value symbols include a Gold Horseshoe, a 4-Leaf Clover, Toadstools, a Pint of Guinness and the mischievous looking Leprechaun himself. They not only offer higher payouts to players but will also activate the Lucky Re-Spin Feature when they land on a winning pay line.

Wild – the Leprechaun Hills slots game Logo acts as this symbol and can help to create more wins when it appears on the reels. This is due to the fact that it can change any of the basic symbols with the aim of generating a higher win if possible.

Scatter – a Pot of Gold is used as the Scatter and the symbol needs to be found on the central reels for the Rainbow Free Spins Round to be activated.

Mystery Symbol – this is depicted as a brightly colored Rainbow but players will only see it if they are able to reach the Free Spins Bonus Round.

Lucky Re-Spins – each time a winning combination is found on the reels using the medium value symbols this additional feature will come into play. At this point of the game, the symbol involved in the win becomes stacked for 1x Free Spin. This can mean further chances for players to increase their stake especially if they are having a lucky streak.

Rainbow Free Spins – the Pot of Gold Scatter symbol needs to be spun on the 2nd, 3rd, and 4th reels for players to be rewarded with this Feature. Should this occur then players can take advantage of 7x Free Spins which could lead to more payouts being added to the jackpot amount.

During this point of the game, the Rainbow Mystery Symbol could also appear and when this happens players can expect to see even higher returns on the amount they bet. If this symbol lands on the reels it will expand to fill all 4 rows of the game. Now players can see it change a random medium value symbol to give them a 50% chance of a higher winning combination being created.

Just 0.24 can secure a spin before play begins with this slots game but for those with a higher budget up to 80.00 can be placed across the 40 winning pay lines. with x2000 max payout (with maximum bet) And as players skip through the Hills following the cheeky looking Leprechaun character they are sure to be able to add to their final jackpot balance.

Players can benefit from a Logo Wild, a Scatter with a Free Spins Bonus Round, a stacked Mystery Symbol and a Lucky Re-Spin Feature. And there are so many fun elements to the games format players of any level can enjoy this recent release from Quickspin.

However, this is considered to be a High variance game so players will need to keep an eye on their budget. And although it may take some time, when the Bonus Features are activated players can expect some big wins being added to the amount they originally placed.

There is plenty to keep players entertained for hours and with a RTP of 96.49% the Leprechaun Hills slots game is already proving popular with those who enjoy the Irish theme. 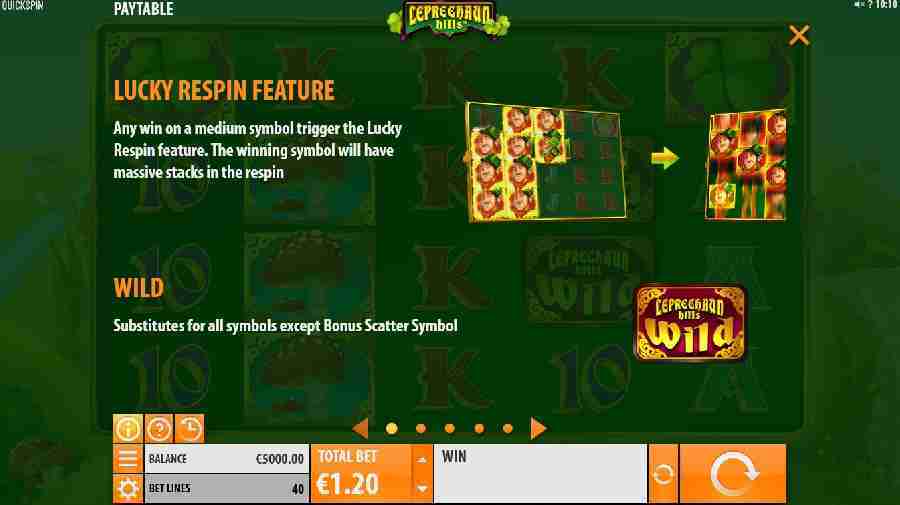 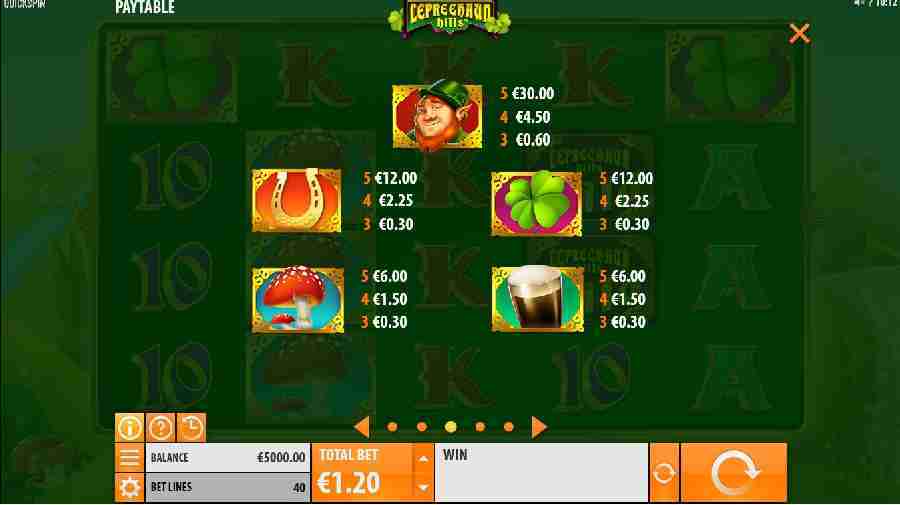 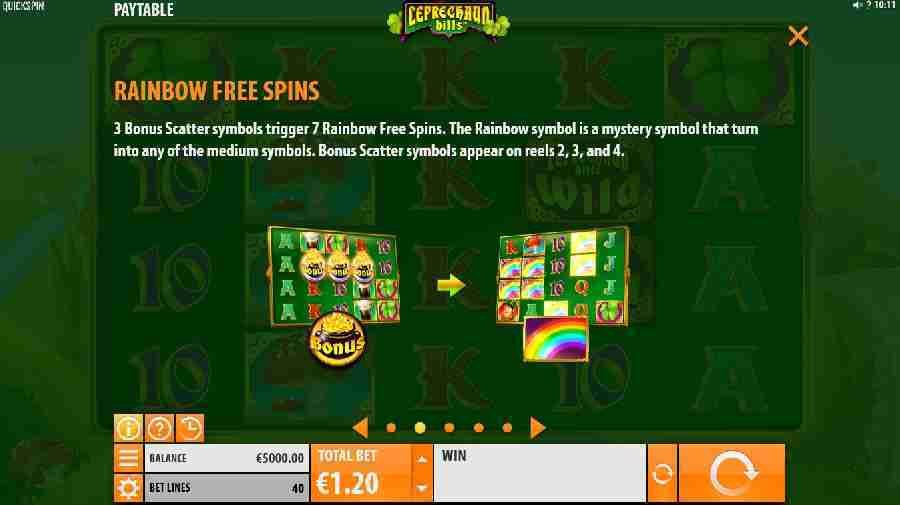 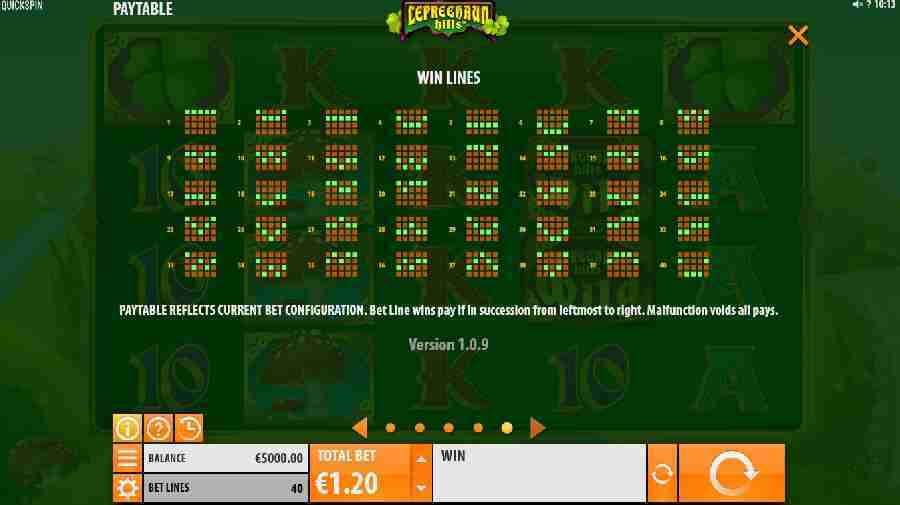 Leprechaun Hills is a 5 reel, 40 paylines video slot game from Quickspin Software provider, it has a Magic Fantasy theme, the game features a Multiplier, Scatter, wild symbols, free spins and has a maximum jackpot win of $160,000