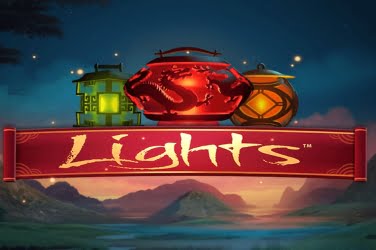 There are many Oriental themed slots in various online casinos and Net Entertainment haven’t failed in providing player’s with a fun game to enjoy with this release. It is a 5 reel game which has 9 winning pay-lines with various Bonus Features to allow players plenty of opportunities to add to their initial wager.

The reels are see-through to show players the beautiful scenery beyond. They can view the sun dipping low in the sky, casting a light glow over the mountains and lakes in the foreground.

All the graphics are of a high quality and there are graceful animations when a winning payline is located across the reels.

A relaxing Oriental soundtrack also plays during the game which adds to the soothing atmosphere that the designers have created.

Using colors of reds, golds, and oranges the Lights online slots game can be played on all Mobile devices as well as Tablets and Desktops. Meaning that players are able to access it no matter where they may be. Able to enjoy the serene Zen feel of the game as they watch the 5 reels spin.

With a chunky look the lowest paying symbols used in the game are icons from 9 through to Ace. In addition to these there are ornate Lanterns of different colors which brighten the reels. This are shown in hues of Dark Blue, Green, Orange, Light Blue, and Red.

To provide a different element to the game Net Entertainment have included Floating Wilds in its design. This means that fireflies will Float onto the screen after each spin to cover 2 to 4 other symbols with the word “Wild” to create the chance of a winning payline.

A Yin Yang symbol is used as the Scatter throughout the Lights slots game and it is when 3 or more of these are revealed that the Free Spins Bonus Round is activated. If 3x Scatters were found the player will receive 10x Free Spins. This increases to 20x and 30x respectively for 4 or 5 of the same Scatter symbol.

During the Free Spins Bonus Round the player will find that from 3 to 6 Floating Wilds will also appear each time. This along with the fact that the round can be re-triggered at any point means that players have numerous opportunities to add to their winnings.

The Lights slots game is proving popular with both high and low rollers due to the coin denominations that have been set. These range from 0.01 to 1.00 and although each of the 9 paylines must be in play during each spin there is a maximum of only 10 coins allowed on each. So wagers can be as low as 0.09, rising to 90.00 if the player has the budget and is feeling lucky.

Players can find Floating Wilds and a Yin Yang Scatter across the 5 reels, along with the chance to activate up to 30x Free Spins. It is a slow paced game, Net Entertainment concentrating more on the ambiance they wanted to create. However this does make it an ideal slots game for beginners as there are less distractions from the base game compared to other online casino offerings.

There are no Multipliers, Mini-Games or a Gamble Feature included in this slots game. It also doesn’t have a Progressive Jackpot for players to aim for. So this may not be popular with those who prefer to maximize on their initial wagered amount.

Players are able to alter various settings throughout so that they can enjoy the game to their own personal preferences. This includes the volume of the music and sound effects to the speed in which the reels spin.

Another option that players can take advantage of if they are busy with other things is to set the game to Auto Play. Here the reels can be left to spin automatically for either a certain amount of times or until the maximum wager is reached.

This is a Medium variance game which is proving appealing to players of all level. Meaning that there are plenty of chances for players to claim a pay-out which is based on the amount initial wagered. So with all online casino games the higher the bet then the more players will be able to claim at the end of the game. 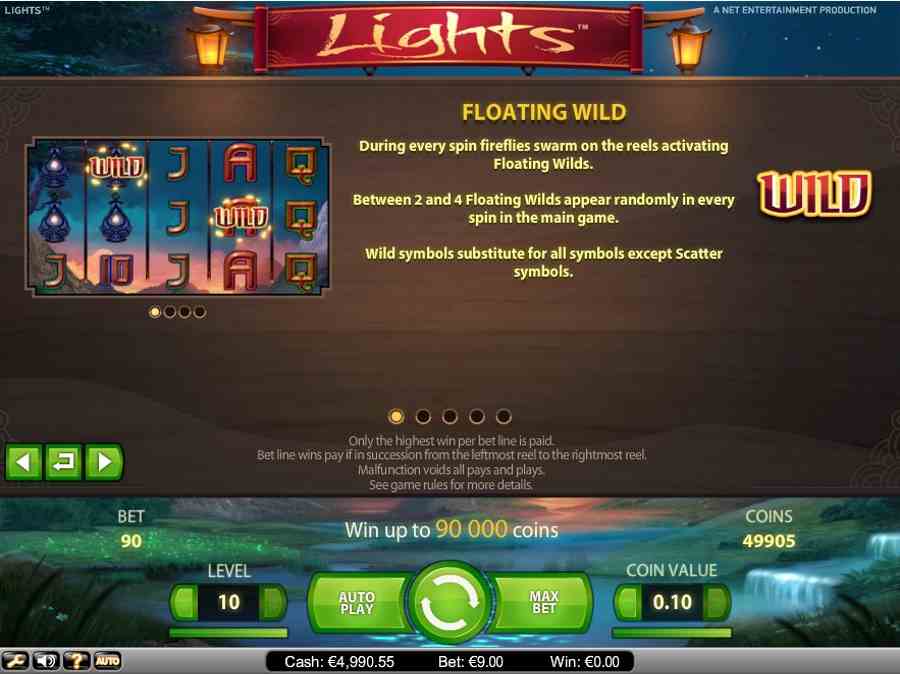 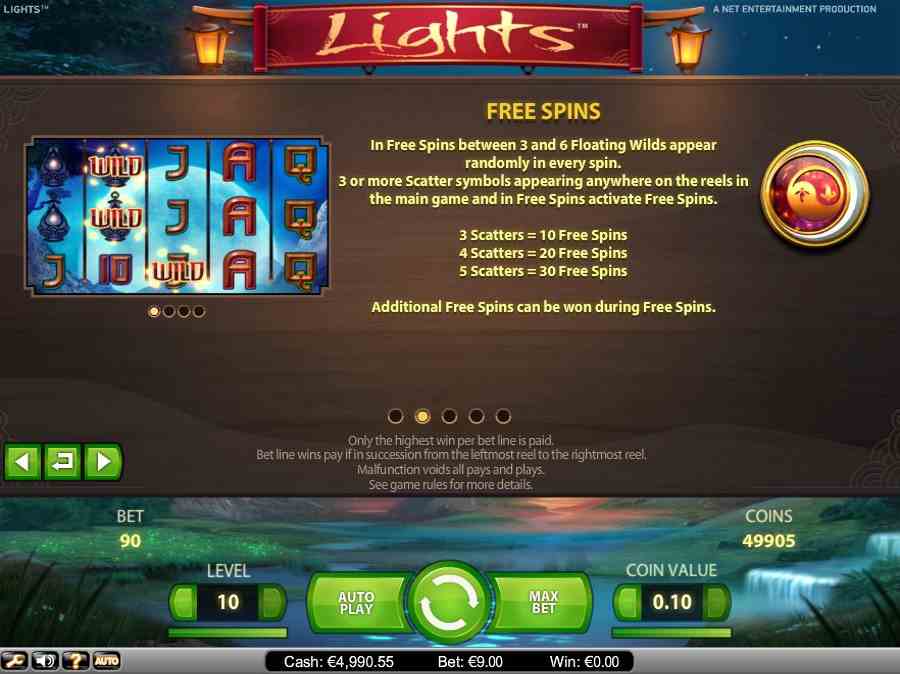 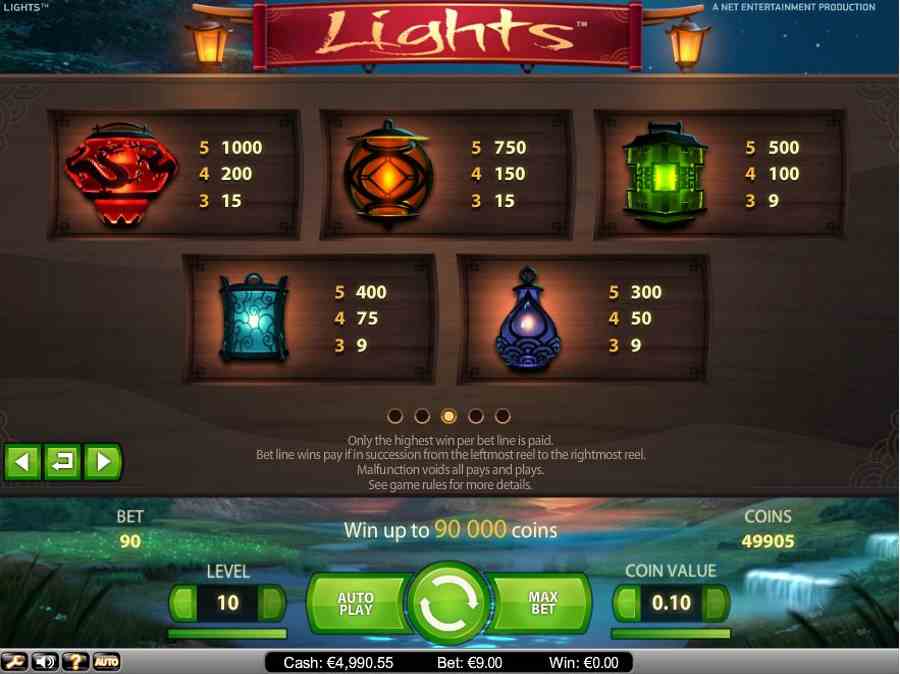 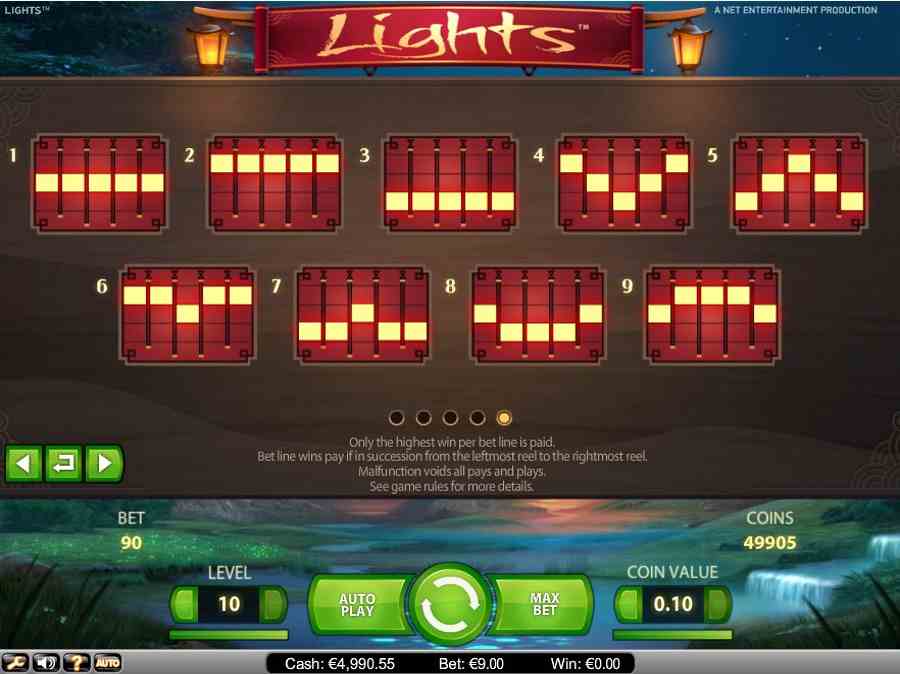 Lights is a non-progressive 5 reel, 3 row 9 paylines video slot game from net entertainment, software. It has a Oriental theme, and features a wild symbol, Multiplier, free spins and has a maximum jackpot win of $10,000