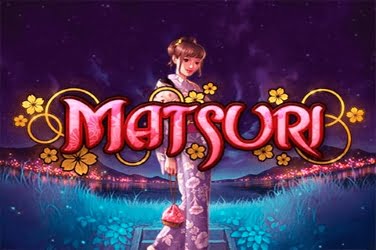 Matsuri in Japanese can mean any kind of Festival and the Play and Go designers have used this as their inspiration for this March 2017 release. They have given players 5 transparent reels that are separated by a delicate thin pink line. In the background there is a scene that shows a still lake with a celebration already underway on the opposite shore. A darkened cloudy sky is at the top of the screen and soothing music plays throughout this online slots game to add to the tranquil atmosphere.

All the graphics have been beautifully designed and the quality can be enjoyed whether the player is accessing the game via a Desktop, Tablet or Mobile device. And with a Wild, Scatter, Free Spins and Bonus Mini-Game there is plenty that can be enjoyed by players of any level and no matter what their budget may be in the Matsuri slots game.

The symbols are all in keeping with this slots games theme and include a Hand Fan, a Rosette, a Bowl of Food, some Ice Cream and some Snacks on a Skewer. When they are included in any of the winning combinations the player will see a small pay out being added to their jackpot balance.

For higher winnings players need to locate any of the 3x pretty Oriental girls that can be found on the reels of this online casino game. They are all circled in a thin gold frame one holding what looks like a Toffee Apple, another clasping a Hand Fan while the third has a Mask.

Wild – a lit Paper Lantern with the word “wild” written upon acts as this symbol and can land on any of the games 5 reels. Should this happen and if there is the chance to generate a winning pay line then it will change any basic symbol so that the player can add to their initial wagered amount.

Scatter – this is shown as a Festival Mask and just 3x of these need to land on the reels for a Bonus Feature to become activated.

Free Spins – the Festival Mask Scatter has to appear on the 1st, 3rd, and 5th for this Bonus Round to be brought into play. Now the player will receive 8x Free Spins with the opportunity to further add to their winnings.

During this point of the game should another Scatter symbol appear on the reels an extra 2x Free Spins are given. This can progress up to 20x should luck be on the players side and they can see a decent return on their original stake.

There is also the chance that the Paper Lantern “Wild” symbol may be spun onto the reels. Now players will see it expand as it floats to the left and will remain in play until falling from the screen.

Kingyo Sukui Feature – the designers have included an additional symbol within the game which can lead players to a Pick Em Style Mini-Game. This is depicted as a Koi Carp and it needs to appear on the 2nd, 3rd, and 4th reels for this part of the game to come into play.

Players are now taken to a 2nd screen where they must collect the fish from a pond to receive an instant cash prize. This Bonus Feature will continue until either all of the fish have been caught or if the fragile paper spoon players are asked to use breaks

The first thing that players must do before the reels can be set to spin is to decide upon their wager. Play and Go have allowed them a wide range of options however with coin denominations between 0.25 and 100.00 able to be staked on the 25 winning pay lines.

Although there isn’t a Progressive Jackpot, Multipliers, or Gamble Feature for players to take advantage of there is still plenty on offer to keep them entertained. Instead they will find a possible Expanding Wild, and up to 20x Free Spins along with Mini-Game to further add to their winning amount.

For those who need to be away from the screen there is an Auto Play Feature available for players to utilize. After setting the 5 reels to spin either for a certain amount of times or until their maximum wager is reached they can leave the game to run automatically.

With a RTP of 96.17% the Matsuri slots game has been proving popular with players from around the globe who enjoy the Oriental Festival theme. 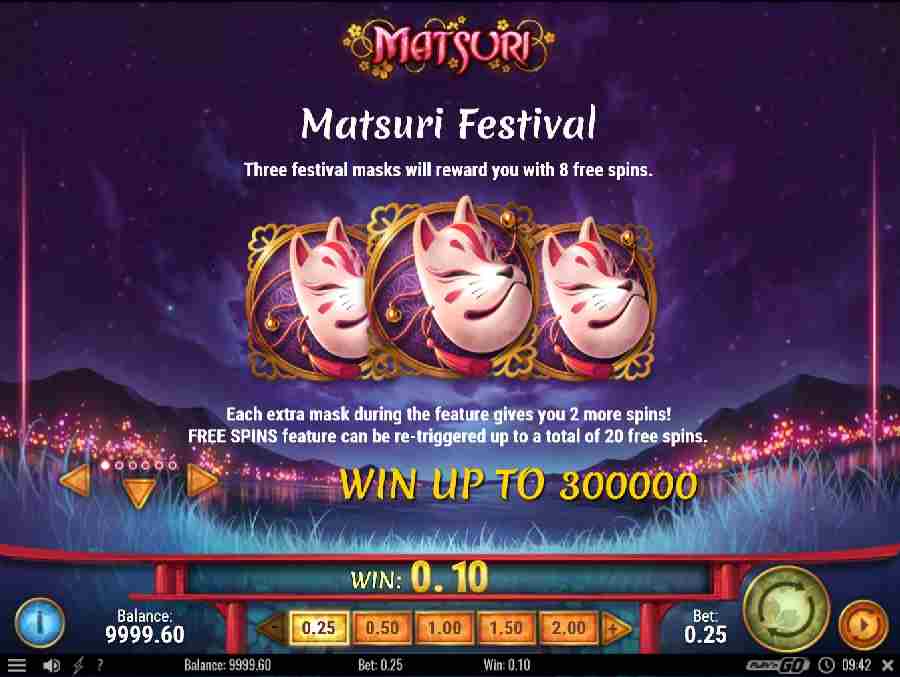 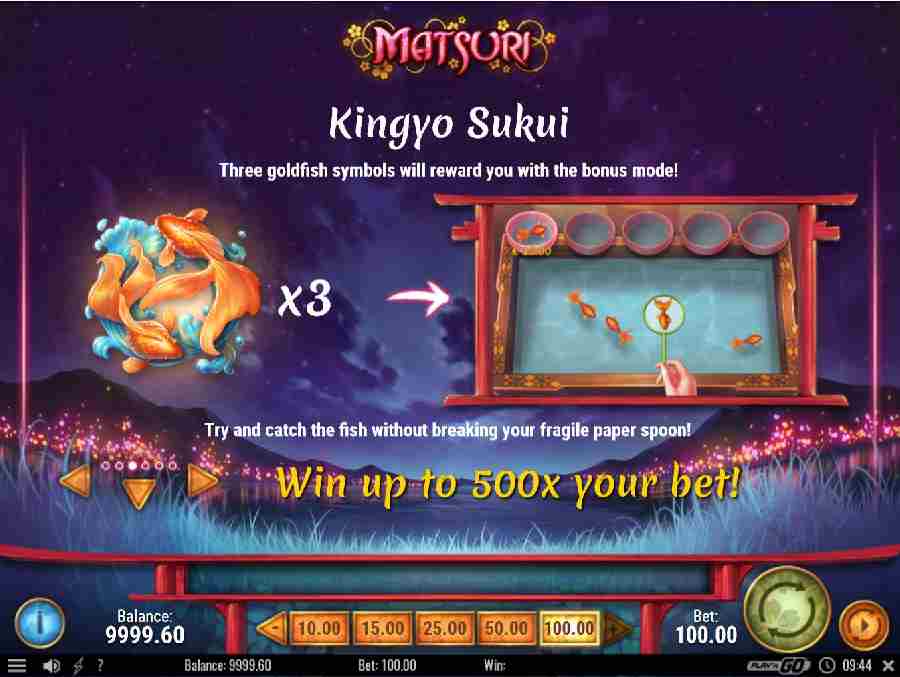 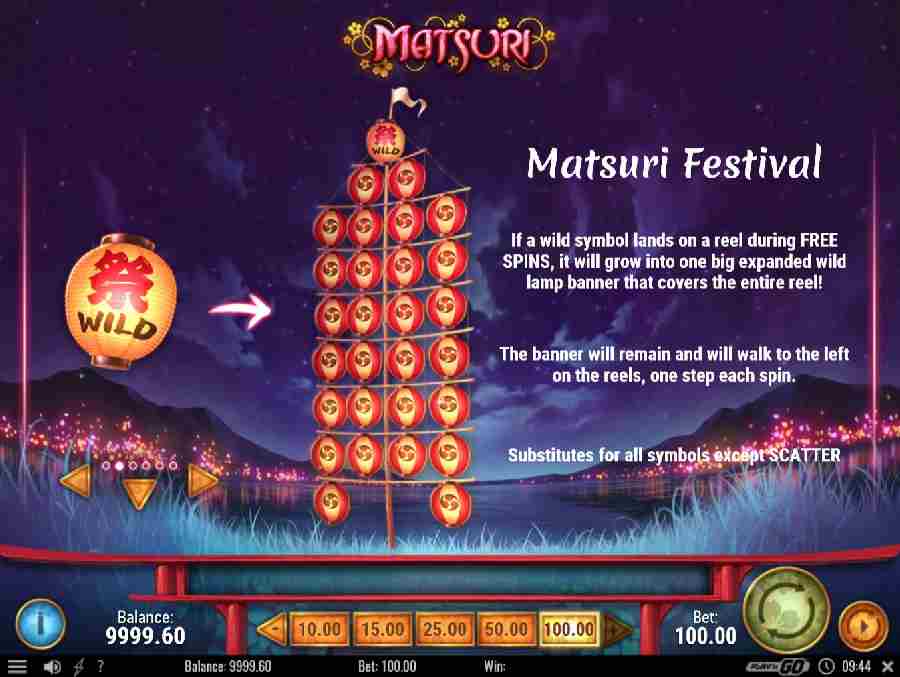 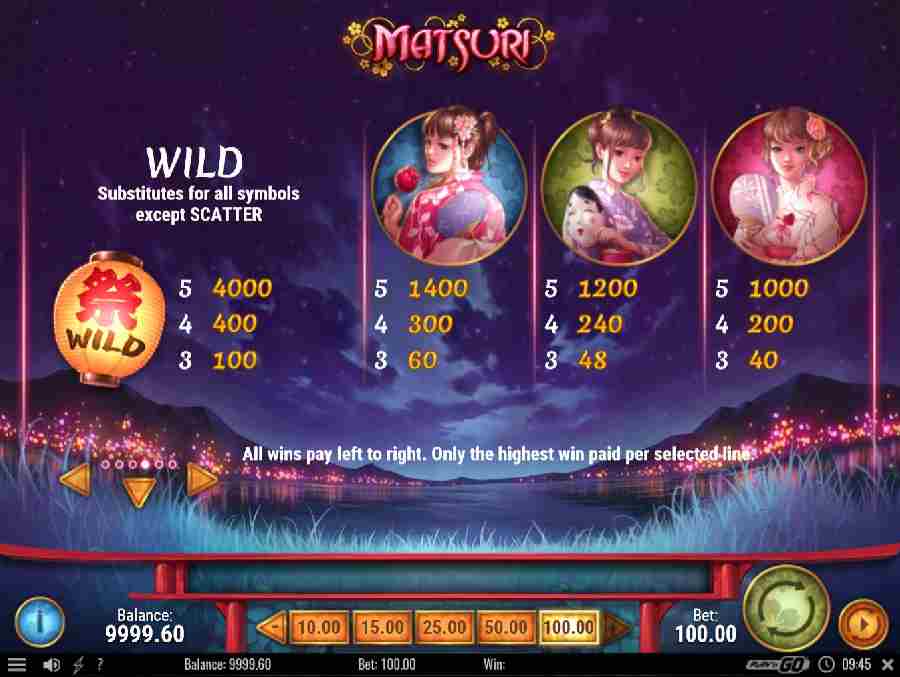 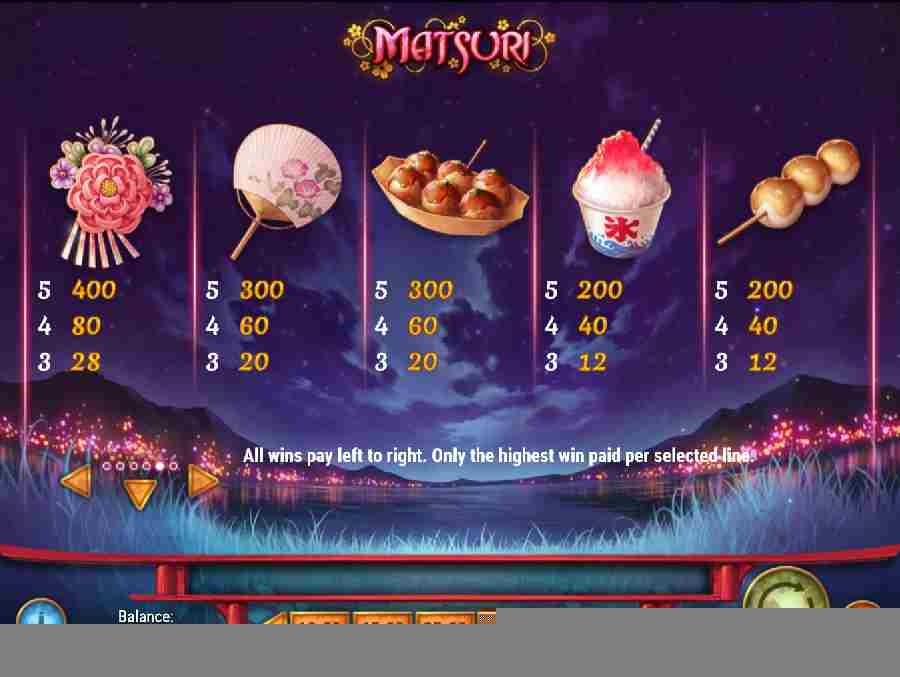 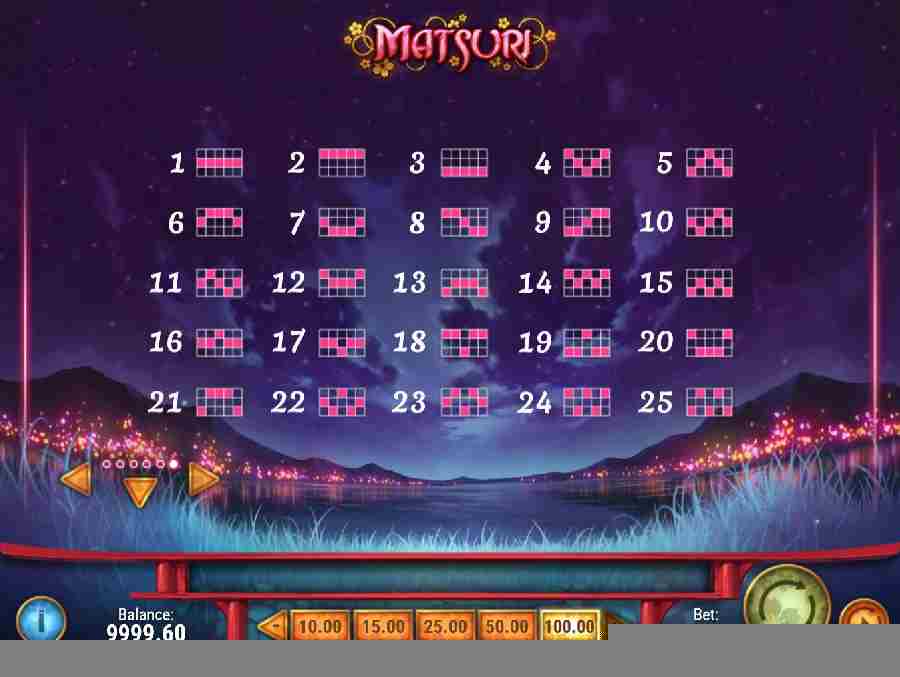 Matsuri is a non-progressive 5 reel 25 pay-line video slot machine game from Play’n GO, It has a Japanese theme, and features Free Spins, Bonus Rounds, Expanding Wild and has a maximum jackpot win of $4000,000