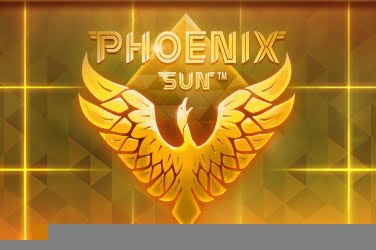 This is an inventive slots game that was released by Quickspin in December 2016. Its theme is based on the Egyptian myth of the Phoenix. A bird that they believe periodically regenerated itself and emerged from the ashes of their ancestors. With this in mind the designers have used bright shimmering colors and set the reels at the bottom of a large imposing golden structure. In the background the sparkling sands lead to Pyramids that reach out into the hazy distance.

These high quality graphics can be enjoyed while the players is visiting their favorite online casino. Accessing the game through either a Desktop, Tablet or Mobile device this fast paced game is certainly visually appealing.

A quirky twist has been given to the Phoenix Sun slot games format which is rather unique. With this slots release players can benefit from 243 ways to win during the base game. However if the Free Spins Bonus Round is activated an impressive 7776 paylines will become available for players to take advantage of.

Delicately designed 10 through to Ace symbols will give the lowest pay outs if used in a winning combination. Other symbols are all in keeping with the games Egyptian theme and include 3 different Gods. There is Anubis, a Scarab, and Bastet which are all shown in high definition across the 5 reels of the game.

However if players want to get more of a return on their wager then they need to look for the highest paying symbols. These amounts will be added to the jackpot balance if the male Tutankhamun or female Cleopatra symbols are found.

Wild – there are 2 different Wild symbols used in this online slots, the first of these is a Gold “Wild”. When this lands on the reels it can change other symbols besides those that offer additional Bonus Features.

The 2nd is a Phoenix “Wild” which will also create more winning combinations if they can alter other symbols. However they won’t be appear during the Free Spins Bonus round although it can activate another additional Feature.

Phoenix “Wild” – each time one of these symbols lands on the reels players will see the meter to the left of the screen begin to fill. But if they are included in a win then 3 blocks from the grid above are removed to reveal more symbols. 1x Free Spin is also rewarded to the player and the round will continue until no more Phoenix “Wild” symbols are found.

Free Spins – this Feature is activated when 5 Phoenix “Wild” icons are collected and the player can now benefit from 8x Free Spins. Yet an additional element has been added by the fact that the whole 7776 paylines will come into play. And although this round can be hard for players to trigger they are able to claim some big wins if they are lucky enough to get to this level of the game.

The coin denomination is set to a level ranging from 0.25 to 100.00 so the Phoenix Sun slots game can be enjoyed by both high and low rollers. Players can look forward to a RTP of 96.08% as they search the sands of Egypt to find its hidden treasures. Whether they are in the base game with 243 different ways to win, or if they have reached the Free Spins Bonus Round which extends to 7776 paying combinations there are numerous chances for the jackpot to be increased.

Not only have Quickspin included a Gold “Wild” there is also a Phoenix “Wild” to be found during the game. These symbols provide a thrilling adventure where players can collect images in the hope of reaching the next level.

Some players may prefer slots games that provide a Progressive Jackpot or a Gamble Feature but this Medium variance release is still proving popular on a global scale. Even those players who prefer to be less interactive with the game can set it to run automatically by using the Auto Feature.

Soothing Egyptian tunes can be heard in the background while players watch the 5 reels spin. The fun additional Bonus Features all adding to this fast paced and entertaining slots game from Quickspin online casinos. 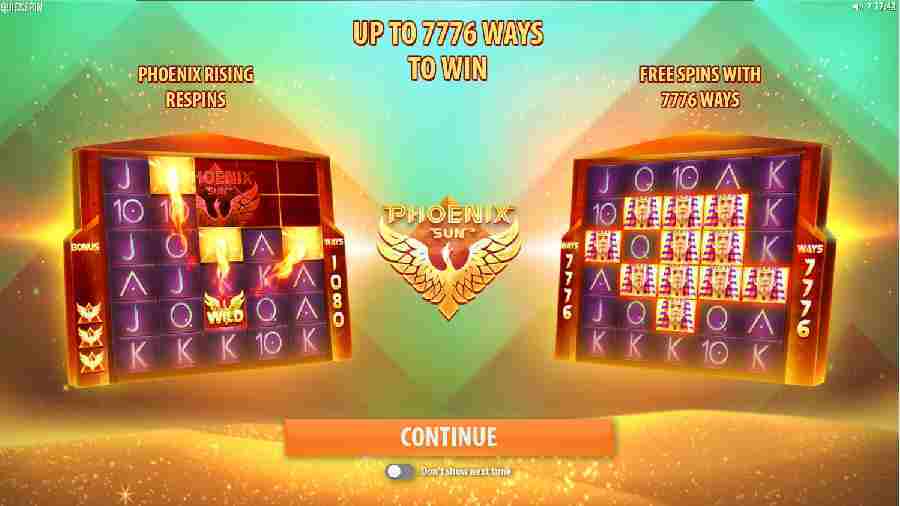 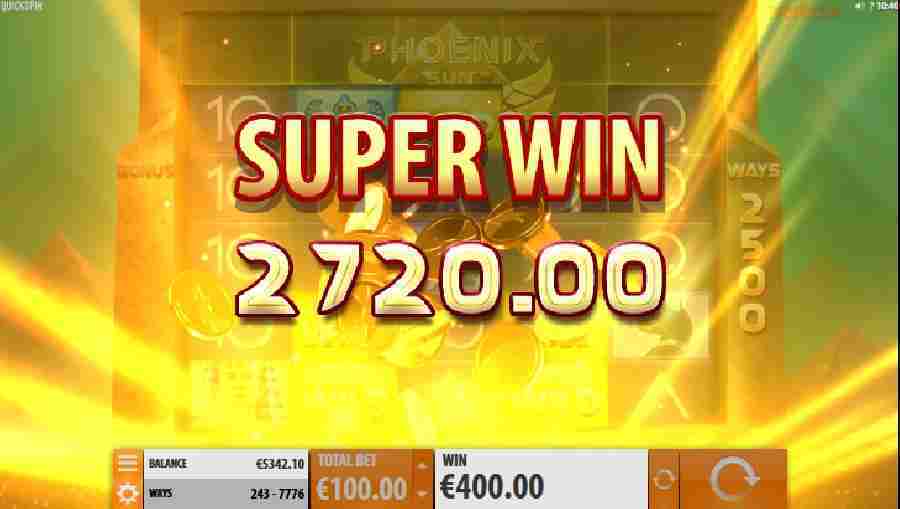 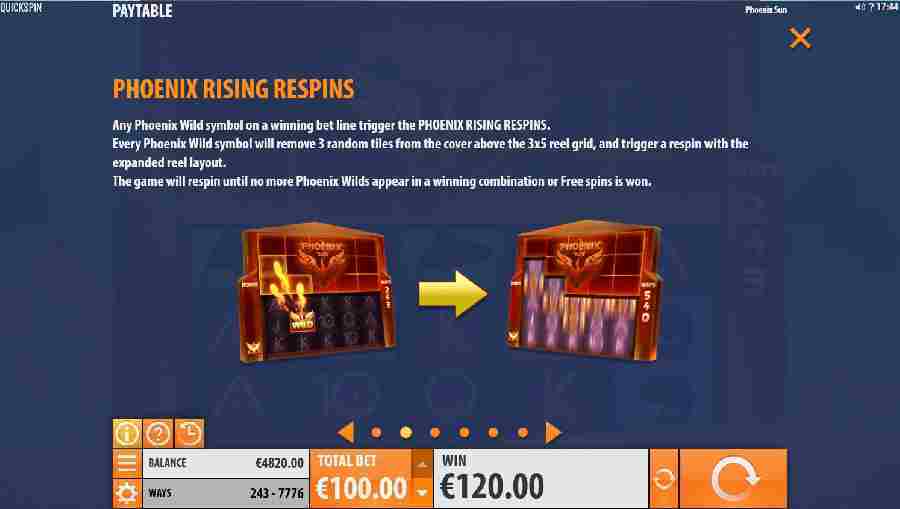 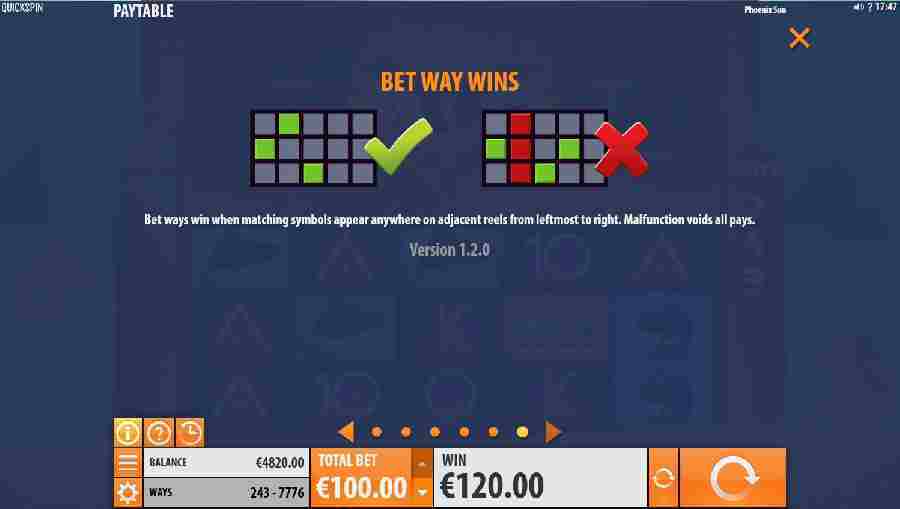 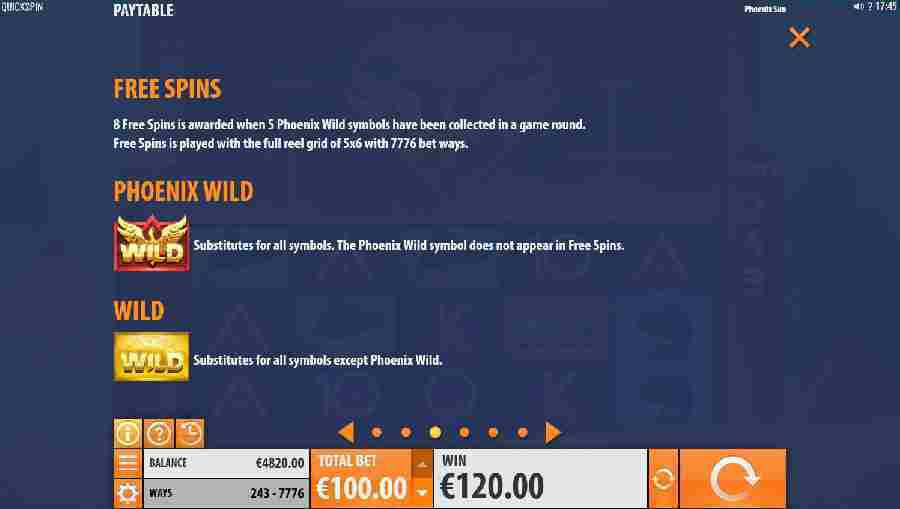 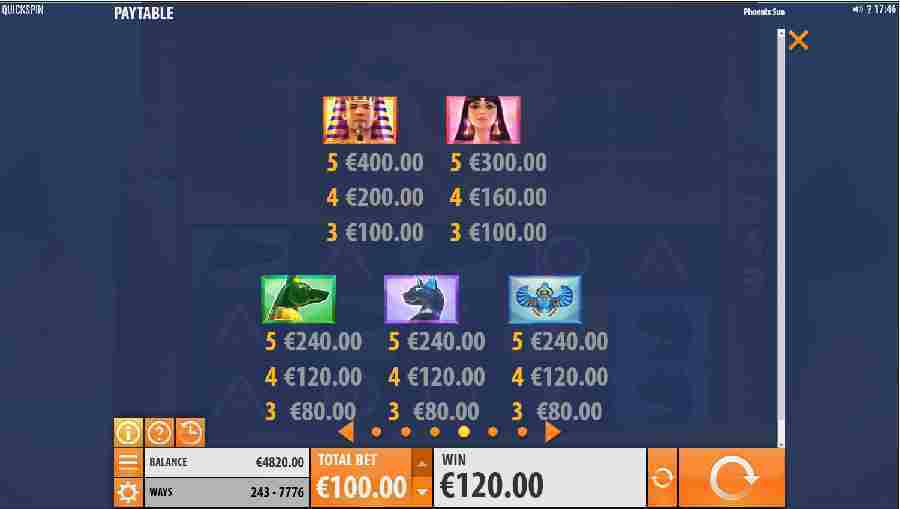 Phoenix Sun is a non-progressive 3×5 reel grid and 243 bet ways video slot game from Quickspin, it can have up to a 6×5 reel grid, and 7776 bet ways and has a fairy tale theme, the game features  wild symbols, free spins and has a maximum jackpot win of $400