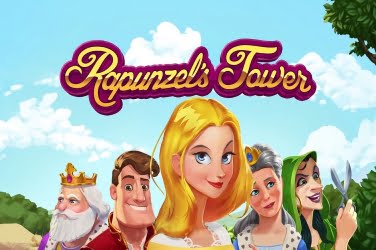 Rapunzel’s Tower slot is based on the Fairy Tale that was penned years ago. And although this game was originally released in 2013. Quickspin has re-vamped it for their online casinos in 2017. So players can find crisper and clearer graphics and an upbeat soundtrack while they try to help the young maiden escape from the Wicked Witch who imprisoned her.

The background shows a bright blue sky with fluffy white clouds with some greenery to the right. At the left of the screen, players will see Rapunzel looking rather fed up at the window of a tower waiting for her Prince to rescue her.

All the symbols are large and fill their position within the ornate golden frame which holds them. Yet their simplicity could remind some of a child’s storybook as they enter the Fantasy theme that the game’s designers have used in this online slot.

There are various ways to access the game including Desktop, Tablet, and Mobile devices. By doing this Quickspin have ensured that players from around the globe can enjoy this fun packed game no matter where they may be. And with 5 reels, 20 pay lines, and various Bonus Features there are plenty of opportunities to win big with this slots release.

The 9 through to Ace symbols are shown on a sheer white background and have been done in a font that has a Germanic look. Although only offering the lowest payouts they do appear regularly across the games 5 reels to provide small additions to the player’s original wager.

Other symbols that players will find in the Rapunzel’s Tower slots game is Dame Gothel the Witch, Rapunzel’s parent’s the King and Queen of the story and of course the Prince who goes to rescue his Princess.

Standard Wild – an image of Rapunzel’s smiling face is the Standard Wild symbol used in the game. When she appears any of the Basic Symbols can be changed if there is the chance of creating a winning combination. In addition to this if all 5 lands on the reels then the player will receive 35x their stake.

Bonus Wild – for this Feature to be activated players need to locate 3 symbols showing a lock of Rapunzel’s Hair tied with a blue ribbon.

Scatter – this is a Tower “Bonus” symbol and will allow players to reach a Free Spins Bonus Round and additional Mini-Game.

Re-spin Wilds – Respin Wilds Stick Until You Win, the Bonus Hair Wild needs to land on the 2nd, 3rd and 4th reels for this Feature to be activated. These symbols will now “freeze” and remain in place until the player can claim a guaranteed win to add to their jackpot balance.

Free Spins – when 3x Tower “Bonus” icons land on the reels players can take advantage of 10x Free Spins. Not only does this give players more chances to generate a winning combination but there are additional Features which can give bigger wins.

The aim here is to help the Prince to climb the Tower and if a Hair Wild symbol appears during any of the spins then players will see him move up 1x position. However, as he climbs higher random extra Free Spins are given which can amount up to 8x. And if the player can get the Prince to the top they will also benefit from a 2x Multiplier to be included in their winnings.

Firstly players must decide on how much they want to wager on the 20 structured pay lines. They can use the +/- button on the Control Panel at the bottom of the screen and ranges from 0.20 to 200.00. Now by hitting the Spin button will see the 5 reels come into action and once they have stopped if players are lucky enough they will receive a payout to add to their final balance.

Quickspin has been rather creative in this slots design and it offers some engaging game play. Providing players with 2x Wilds, and a Scatter symbol which will lead to Re-Spins and Free Spins Bonus Rounds along with the chance of doubling their winnings.

Some players may find that they need to be away from their screen for a while but there is an Auto Play Feature included in the game’s format so they can leave the game to continue automatically.

This is a Medium Variance game which offers players a RTP of 96.25% and with its entertaining story-line the Rapunzel’s Tower slots game is definitely worth a look if players enjoy the Fairy Tale theme. 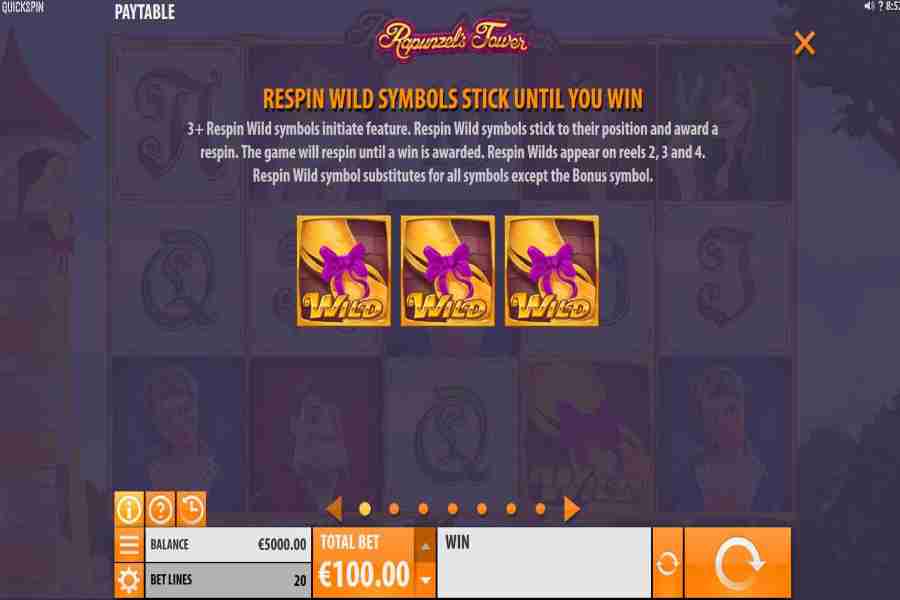 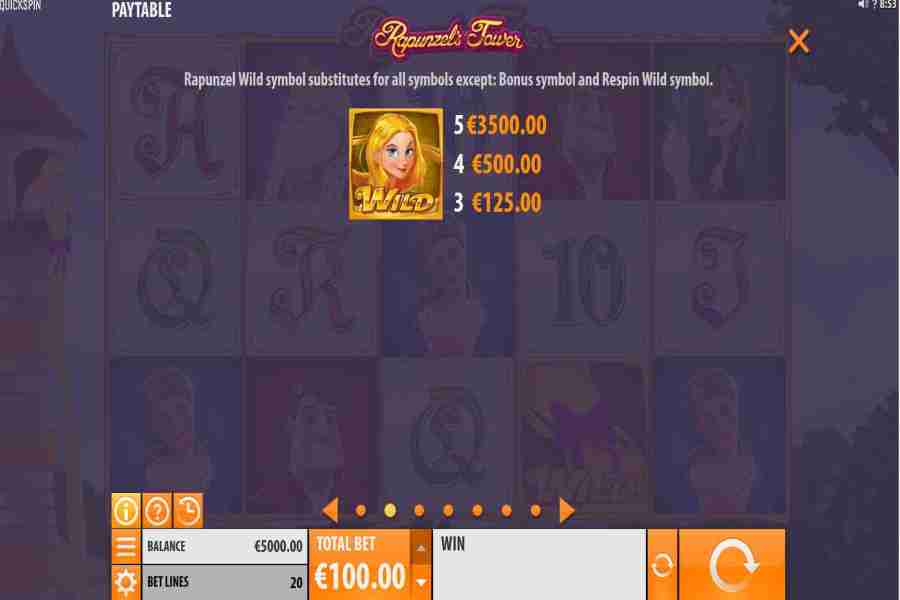 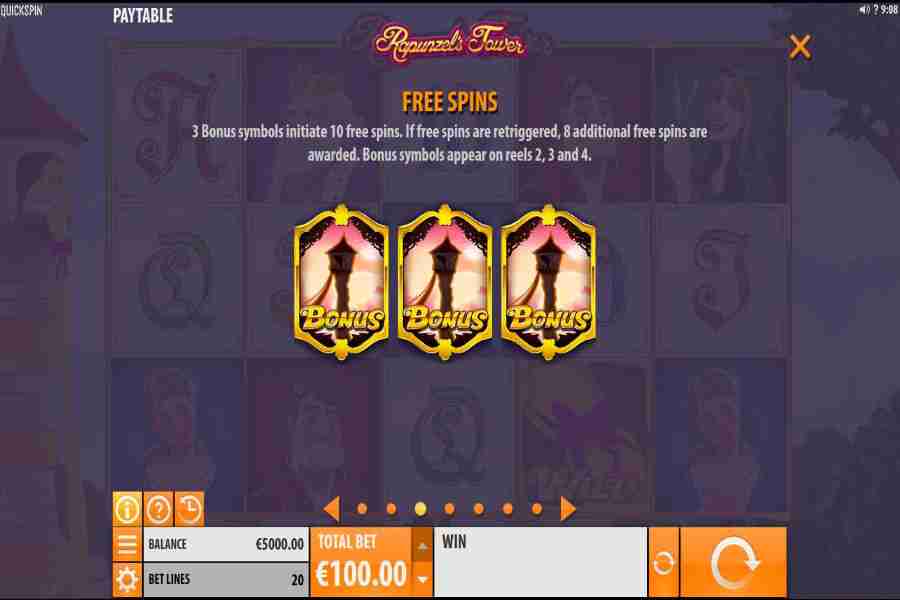 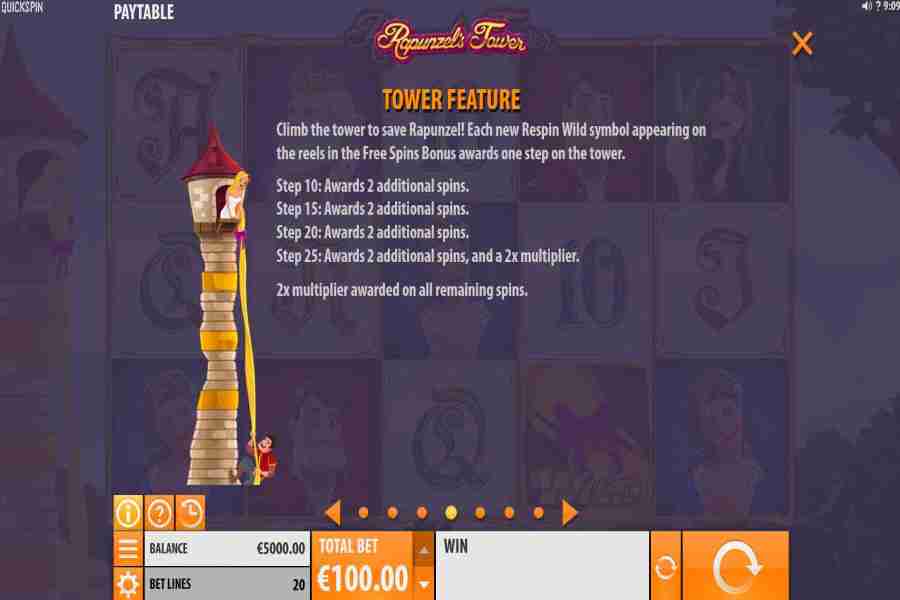 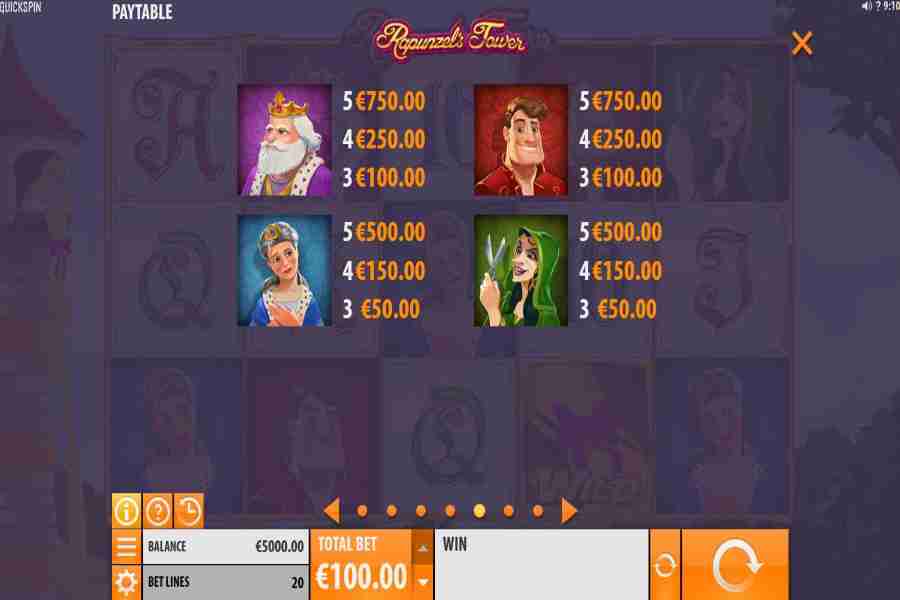 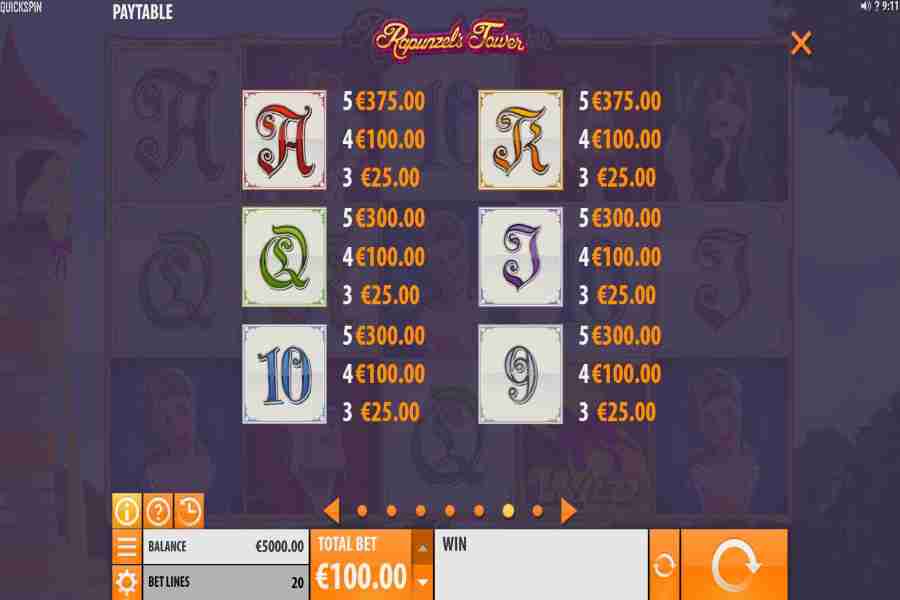 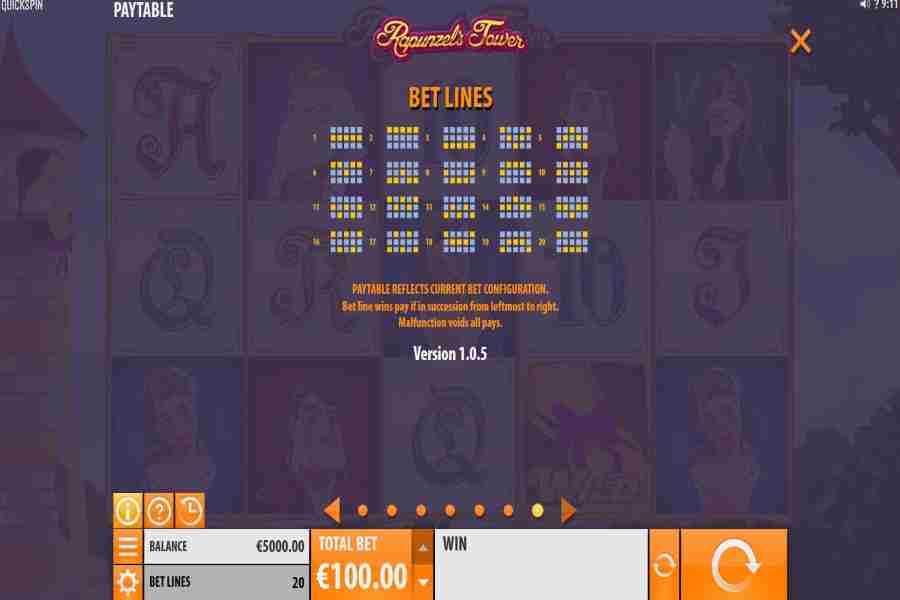 Rapunzel’s Tower is a non-progressive 5 reel, 20 fixed paylines video slot game from Quickspin software provider, The game features Respin Wilds that stick until you win, and a Free Spins Bonus. Rapunzel’s Tower has a maximum jackpot win of 100x your stake.