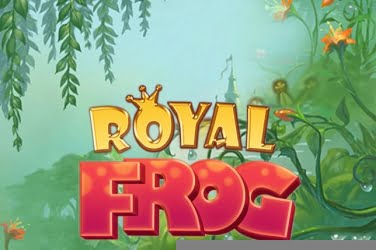 There are various adaptations and movies that have been loosely based upon the children’s story that was penned by the Brothers Grimm. One example being the Disney 2009 movie “The Princess and the Frog” that became popular with many youngsters when it was released.

Quickspin have used the same fantasy tale as their inspiration in the Royal Frog slots game. And although players may not need to kiss any frogs there are plenty of opportunities for them to receive the treasures they have been hunting for across the games 5 reels.

The screen depicts a tranquil scene of a deep pond with the branches of weeping willows hanging from either side. A hazy blue sky can be seen above the reels while the still waters at the bottom are bobbing with lily pads and waterlilies.

Players can enjoy a tranquil atmosphere during this online slots game. This is further enhanced by the soothing music which plays throughout. And nothing is taken from the high quality graphics that have been used in its design whether the player is accessing the game via a Desktop, Tablet, or Mobile device.

Designed in a Bubble style font are the 10 through to Ace symbols that have been used in the games format. Although only able to reward players with a low pay out they do appear frequently across the reels.

There are also 3 Regal looking Frogs colored in gentle shades of Blue, Purple and Pink to be found during play. These along with 3x Waterlilies of White, Pink and Purple and all of these provide players with a higher paying amount when a winning combination is created.

Wild – the main standard Wild symbol in the game is the Princess. She can appear on any reel and may often become stacked to fill each position. And by changing other icons besides the Scatter they provide players with numerous chances to add to their winnings.

Scatter – a Yellow Flower is used in the game here but it can only be found on the 2nd, 3rd, and 4th reels. However when all 3 are located the Free Spins Bonus Round will be activated for players to take advantage of.

Free Spins – players are rewarded with 10x Free Spins when 3x Yellow Flower Scatters are spun. An additional bonus is that random Wilds and Multipliers can also be added to the reels with each spin. This can result in some large wins, especially if the player is wagering the maximum set amount.

Additional Wilds – at the right of the screen there is a grid to show how much it will cost the player if they choose to add extra Wild symbols to the games reels. It is purely at the individual player’s preference whether or not they utilize this Feature. However it is a unique element that is proving popular with casino gamers around the world.

For 1x Additional Wild it will cost the player 40x their line stake. This increases to 80x, 120x, and 160x, respectively if 2, 3, or, 4 Wilds are selected. Yet in a creative twist the designers of this online slots will ensure that if 3 or 4 Wilds are added any winnings will receive a 2x Multiplier. Meaning that players can expect some large wins if they are lucky enough to create a structured pay line.

If the player has selected to utilize the Additional Wild Feature they could also see random Wild symbols fall upon the reels to then change any of the Regal Frog images so that more winning combinations can be found.

To ensure that this latest release remain popular with both high and low rollers Quickspin have set a wide range to their structured wagers. They have provided 160 winning combinations across the games 5 reels and play can begin with just 0.40. However should the player’s budget allow they are able to raise this amount to a maximum of 200.00 with each spin. This means that players of any level can enjoy all that there is on offer in this online slots game.

A RTP of 95.43% can be expected when just 1x Wild symbol is in play. This then rises to 96.77% however if all 4x Additional Wilds have been selected. Along with a Standard Princess Wild, a Scatter, Free Spins and Multipliers there is plenty to entertain players as they watch the reels of the Royal Frog slots game spin. 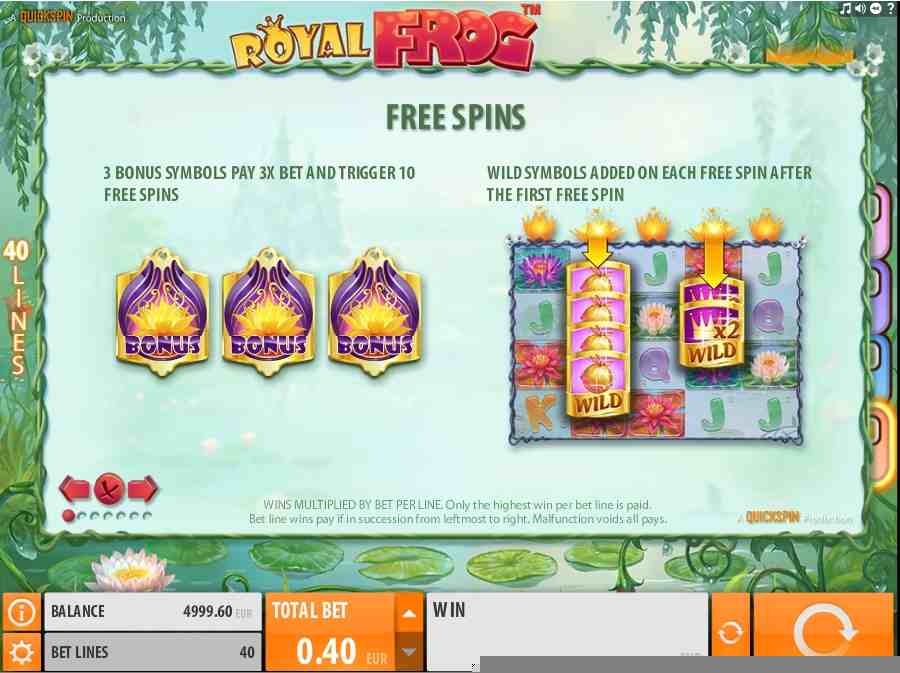 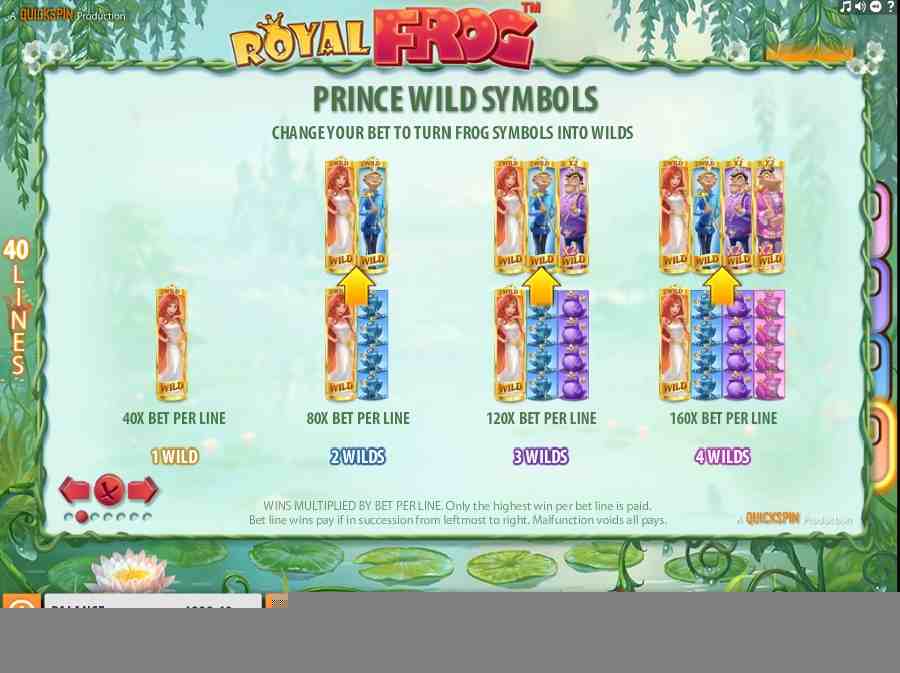 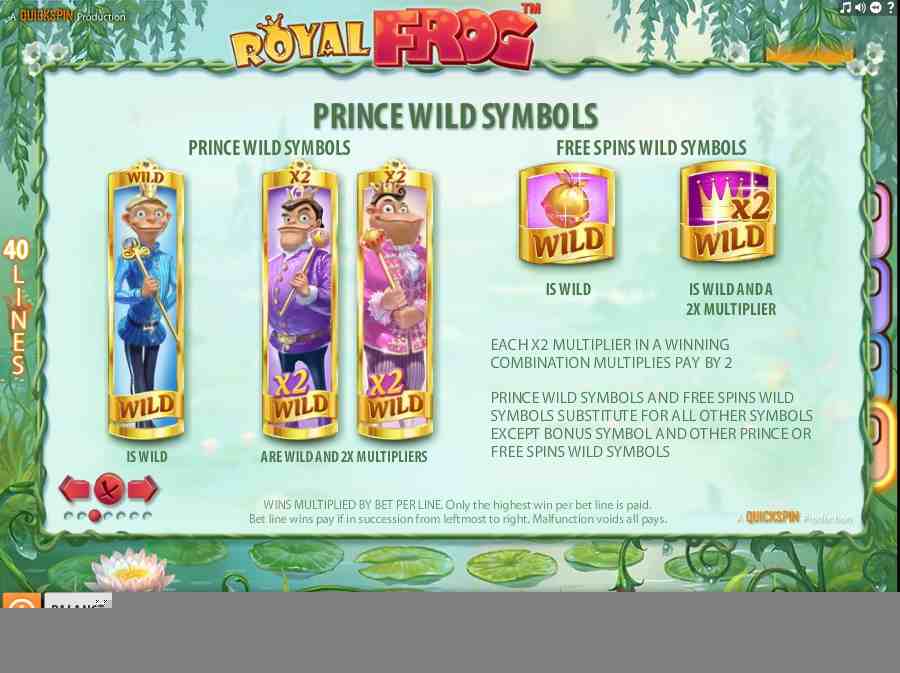 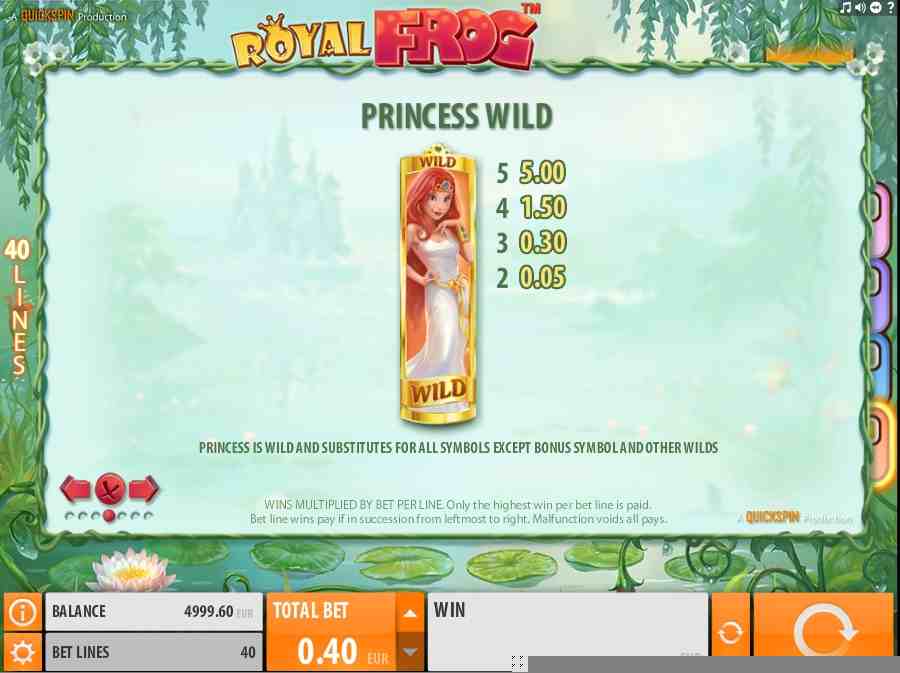 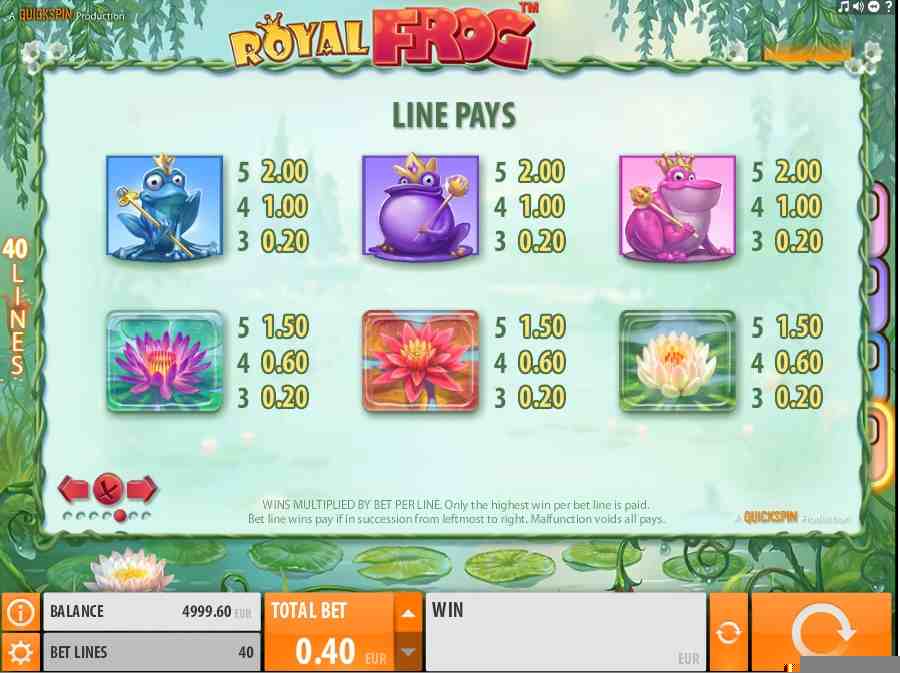 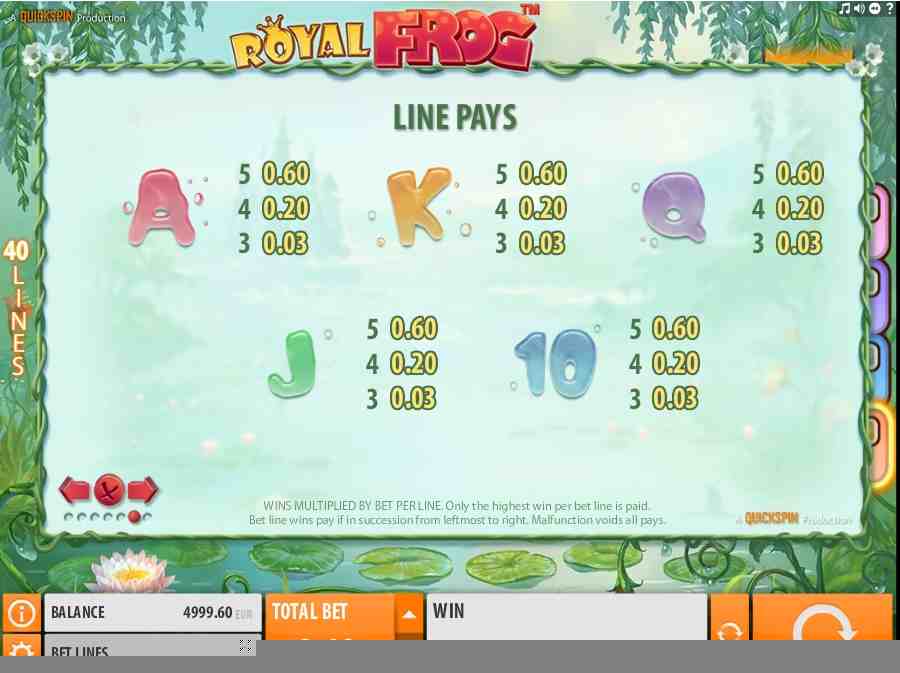 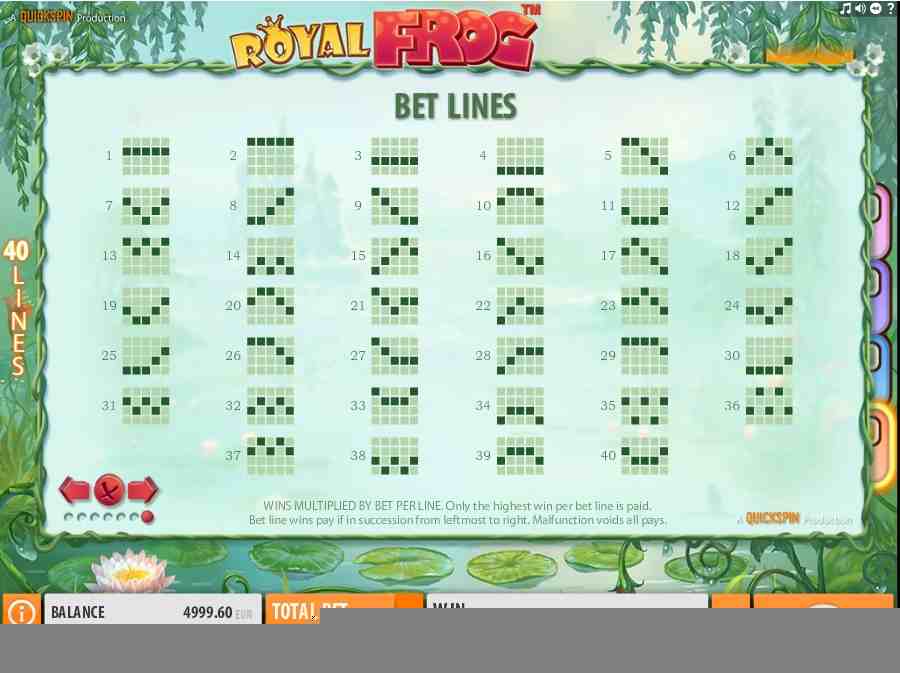 Royal Frog is a 5 reel, 4 row, 40 bet line video slot from Quickspin. The game features Prince Wilds, a Princess Wild, Multipliers, and a Selectable Wilds Feature Theoretical payout is based on Selected Wilds and is a range from 95,43% to 96,77% and has a maximum jackpot win of $2000