Sam on the Beach Slot Review 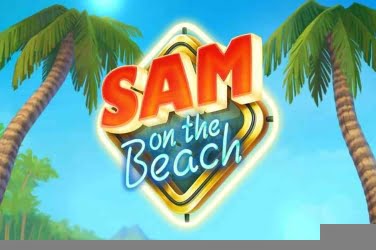 ELK Studios released Electric Sam back in 2014, now they have taken that same main character as their inspiration for this latest creation. Here players can join Sam the Troll and his family on a Tropical island in the Caribbean. The 5 transparent reels revealing a sun kissed scene of a clear blue sea with golden sands and palm trees.

Bright colors have been used in the games design and the screen is filled with high quality graphics. All of the main characters have a cartoony look and the relaxing music adds to the atmosphere of the game.

Desktops, Tablets, and Mobile devices can be used to access the Sam on the Beach slots game. Its play is smooth and the images crisp even when using a smaller screen. So any player can find this slots game in the numerous ELK Studios casinos that are available.

The designers have used images in keeping with the Tropical theme when creating the lower paying symbols. Here players can find a Yellow Starfish, a Blue Seahorse, and an Orange Crab. These are all colored in neon shades which shine vibrantly across the screen when they appear on the reels.

Sam the Troll is of course the main character in this slots game. Yet he is joined this time on vacation with his wife Sandra, daughter Maggie, and older brother Ted. These symbols all reward a higher pay out when they create a winning combination but also play an important role when the Bonus Round is activated.

Wild – the Sam on the Beach Logo acts as the Wild symbol throughout the game and can be found across all 5 reels. Besides the Scatter it is able to change any other symbol so that players are able to see more being added to their initial wager if a win is revealed.

Scatter – this symbol is an ornately decorated Gold Bell and at least 3 of these need to swing onto the reels for the Bonus Round to be activated.

Free Spins – if 3x Gold Bell Scatters appear then the player will receive 5x Free Spins. This raises to 10x and 15x if 4 or 5 symbols land which can mean even more chances for players to win.

Elk Studios have also included another element to this part of the game which adds even more fun for players to enjoy. Should another Gold Bell Scatter fall into view the player will receive an additional Free Spin with a randomly chosen further Bonus which remains in play until the round ends.

Beach Memories Re-Spin – for this Feature to be activated all 4 characters need to land beside each other in a horizontal row, although they can be in any order. When this occurs players can expect 1x Re-Spin and any Wilds that are shown on the reels will become “sticky”.

There are 243 different ways to win in this 5 reel slots game which is something that has been enticing players since its release. Another factor is the wide array of wagers that can be placed which ranges from 0.20 to 100.00. This means that both high and low rollers can benefit from all what is on offer in this online game.

A Logo Wild can help players locate higher wins while the Gold Bell Scatter will lead them to a Free Spins Bonus Round. During this point in the game players are able to enjoy the thrill of the game with the additional Features which includes Multipliers and “sticky” Wilds.

This Caribbean delight can still be enjoyed if the player needs to be less interactive with the Elk Studio software as the Auto Play button can set the reels to spin automatically. But with its bright and cheery format numerous players worldwide are enjoying all the thrills that the Sam on the Beach slots game provides. 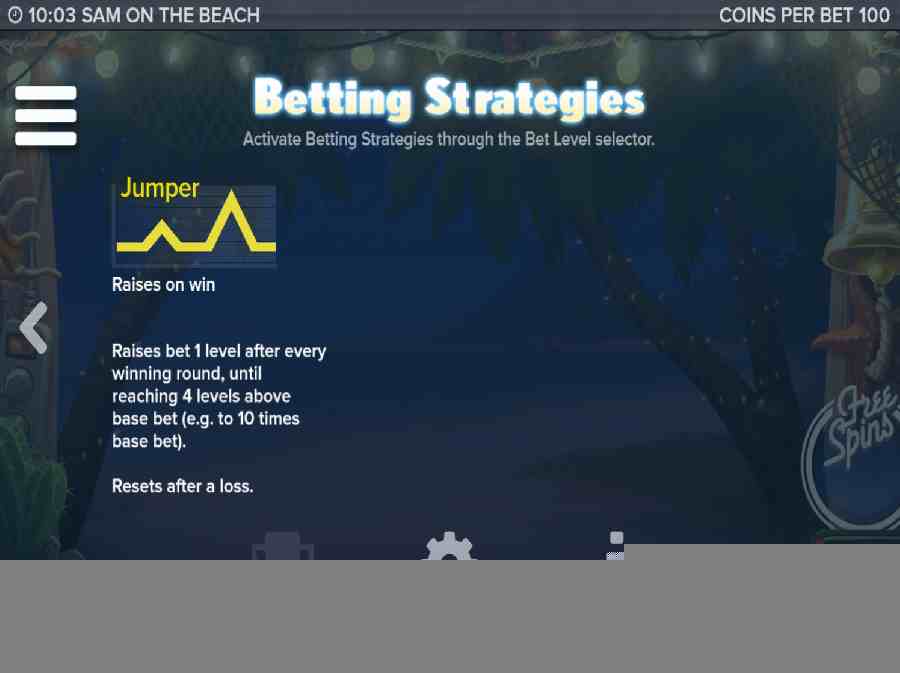 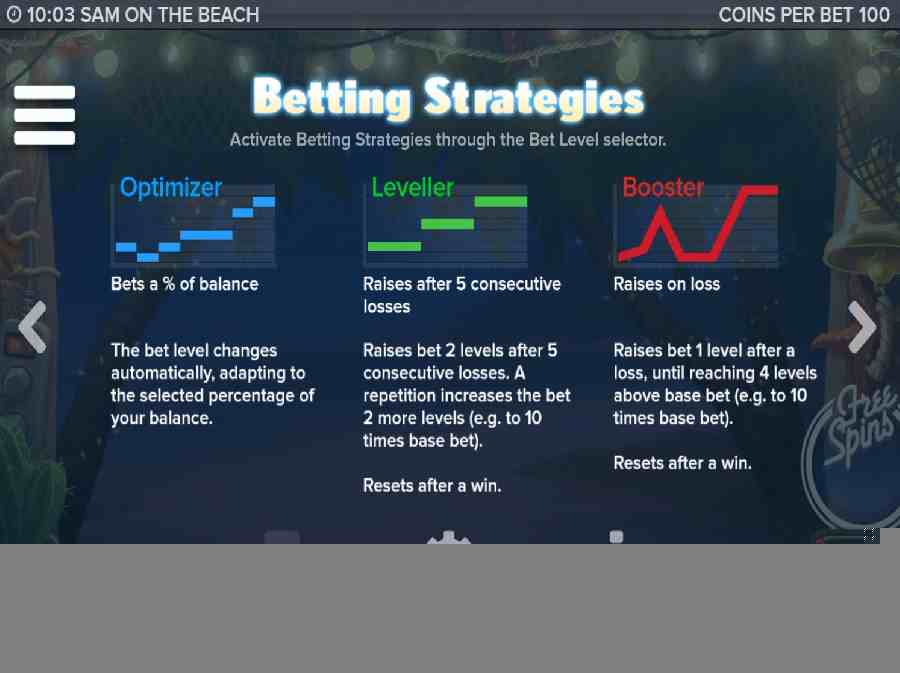 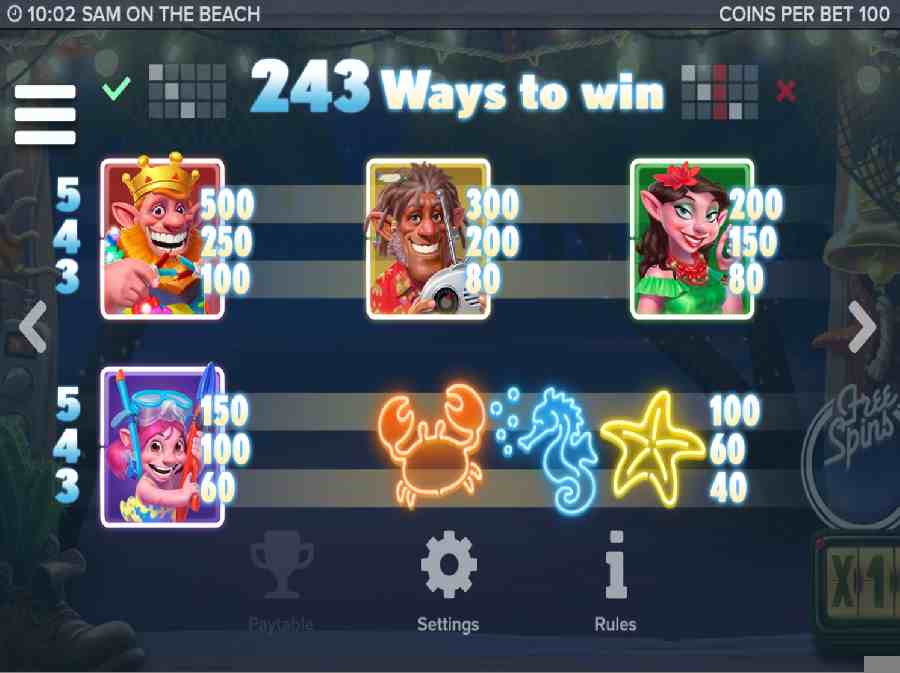 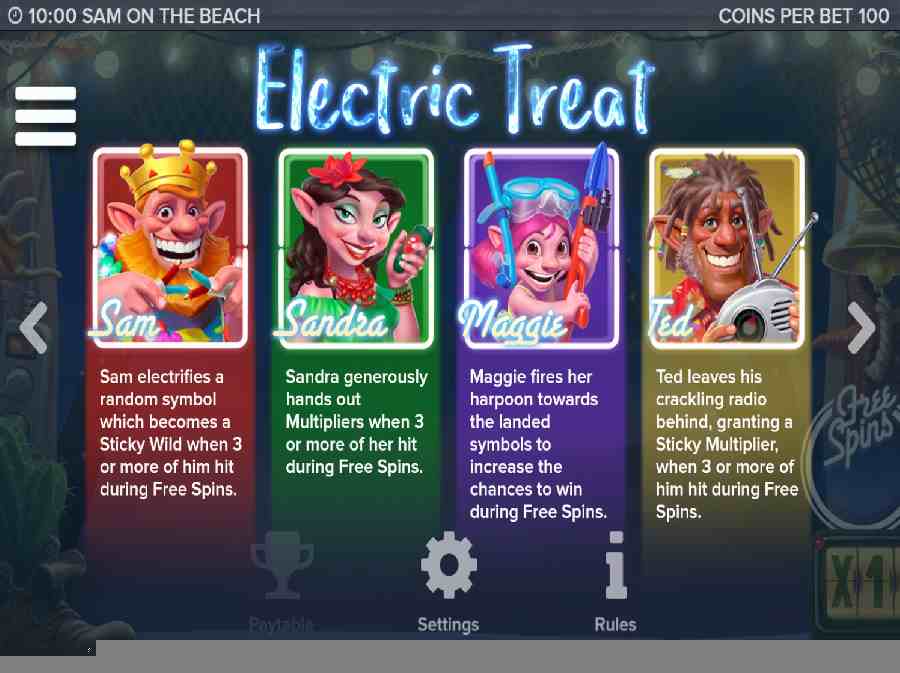 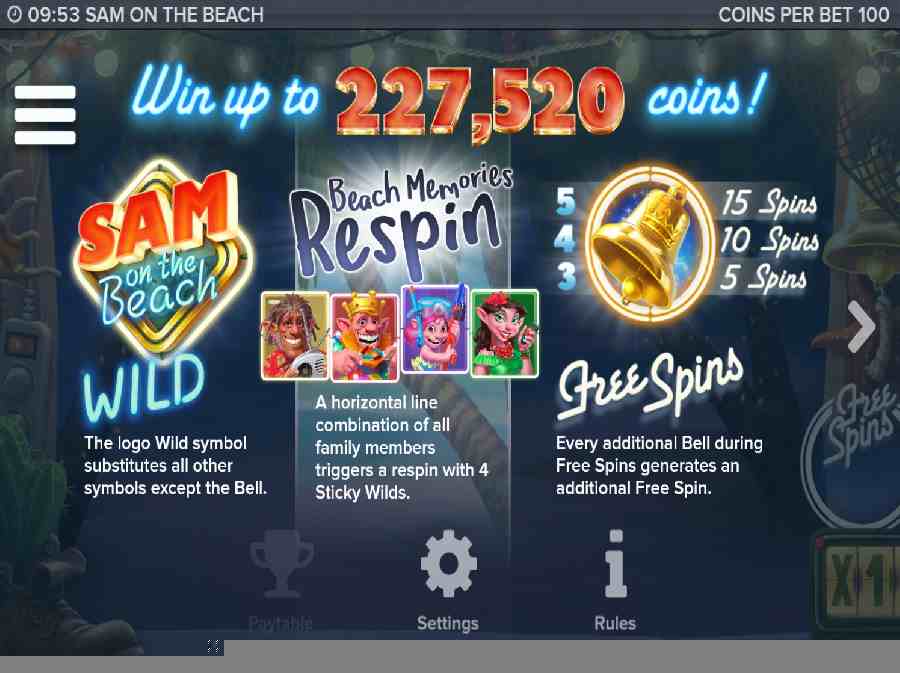 Sam On The Beach is a non progressive 5 reel 243 ways pay-line video slot machine from Elk Studios, it has a beach theme, and comes with a wild symbol, Scatter and free spins with a maximum jackpot win of $500