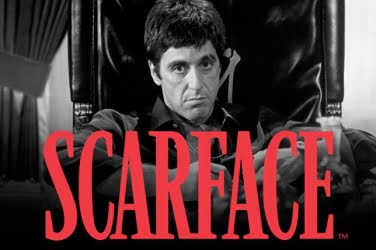 Net Entertainment has collaborated with Universal Studios to create this release for their online casinos. Scarface slots are based on the movie of the same name that hit the big screen back in 1983. The movie was directed by Brian De Palma and starred Al Pacino as the main character.

Scarface the movie tells the tale of a Cuban immigrant who moves to Miami. Once there he becomes a ruthless drug baron who makes a lot of enemies. Since its release, the movie has amassed over $68 million and is considered to be one of the greatest of the 20th Century and now has a cult following.

When the Scarface movie was first screened there were critics who commented on the level of violence and the foul language which were prominent throughout. However these elements are not included in the Scarface slots game, yet there are still plenty of features for players to enjoy.

There are 5 reels in the Scarface slots game which are set upon an elegant black background with silver edging. Players can take in the atmosphere of the movie as they watch the reels spin to hopefully create one of the 20 winning pay-lines. Even the movie soundtrack can be heard throughout this Scarface inspired slots game.

Scarface slots use scenes from the movie and portraits of the characters as the symbols. Players will find Tony Montana, as the main symbol of the game. There are also pictures of Chi-Chi, Manny and Elvira who are other characters in the movie found across the 5 reels of the Scarface slots game.

3 of these characters become the games Wild symbols in Scarface slots. When Manny appears on the 2nd reel it becomes a Nudge Wild. This means that the symbol will remain upon the reel until nudged out of play. During this time players will have various opportunities to create a winning combination to be included in their final payout amount.

Tony Montana himself is the stacked Wild on the 3rd reel of the Scarface slots game. This symbol activates a Mini-Game for players to enjoy. As in the movie, players will watch as gangsters raid Tony’s home. When they reach the landing a door bursts open and the “Say Hello to My Little Friend” Bonus Round begins.

Now the player can choose the gun or grenade to protect Tony from the gangsters. For each one he kills, a cash prize is added to the running jackpot which can be seen at the bottom of the screen. This Mini-Game will continue until Tony is killed. Again players will be reminded of the movie as Tony falls into the fountain which is beneath the balcony, just as in the movie’s scene.

The 3rd Wild is Elvira’s character and is on the 4th reel of the Scarface slots game. When this symbol fills the reel the player is awarded 15 Free Spins. An additional bonus during this point of the game is the 3x Multiplier which further increases the player’s jackpot figure. Should Elvira’s Wild symbol appear again while the player is in the Free Spins Bonus Round then it can also be re-triggered, allowing for even more chances for players to create winning pay-lines in the Scarface slots game.

The other symbols which are located throughout the game of Scarface slots are all in keeping with the Gangster theme. They include a Chainsaw, Guns, and some Bank Notes. Lower paying symbols are the usual 10 through to Ace which is often used in online slots games but they are of a sleek silver design with a skyline visible in the distance.

Before the game of Scarface slots can begin the player must first decide how much they would like to wager. The coin denominations have been kept to just $0.01 and rise to $0.50. While this will appeal to low rollers, the fact that up to 10 coins can be placed upon each of the 20 winning pay-lines also makes it popular with those who wish to maximize their initial wager.

At the bottom of the screen in the Scarface slots game players will find the control panel. Here players can decide how many coins to place, on which pay-lines and of course how much they are prepared to wager.

Players will also find the option to play the Scarface slots game in Auto Play. This means that the reels will spin automatically for a set number of times, or until the wagered amount reaches zero.

Using a famous scene from the movie as its inspiration players can also find the “Say Hello to My Little Friend” Bonus Mini-Game in Scarface slots. It provides an exciting twist to this already inspired slots game from Net Entertainment online casinos.

With the high-quality cinema-graphics which are used in Scarface slots, players can absorb the atmosphere as they enjoy this fast-paced game as if watching part of the movie. Players of any level can place their stake and watch the reels spin hoping to reveal the various Bonus Features that are on offer. 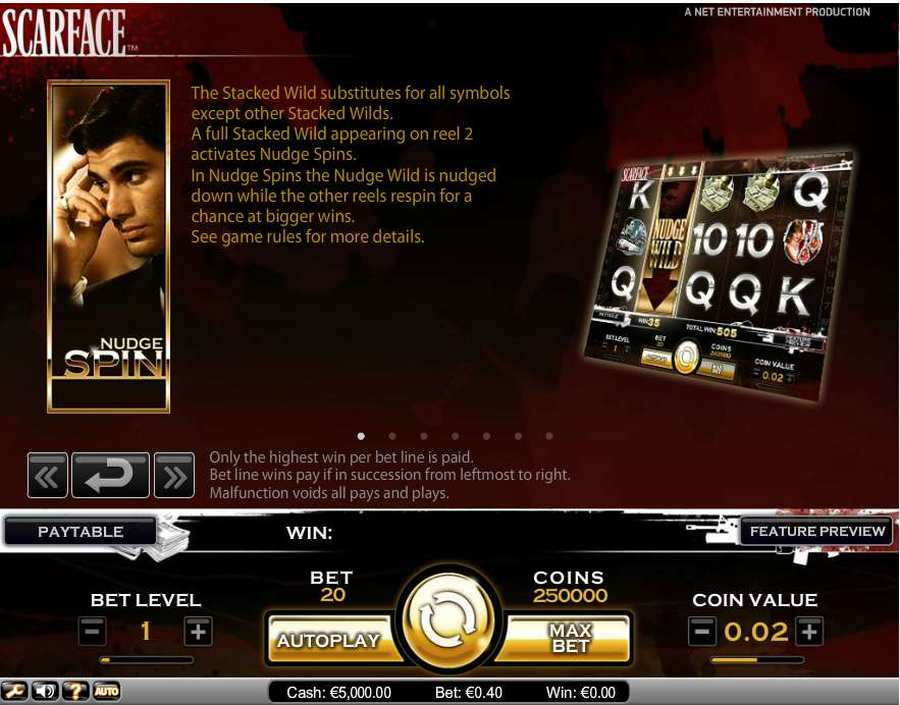 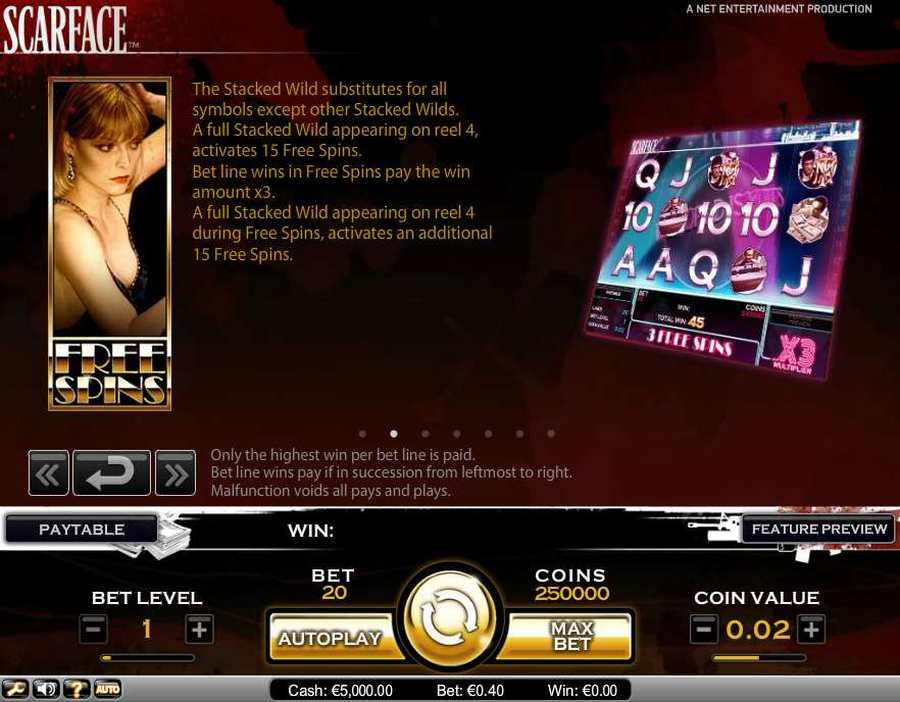 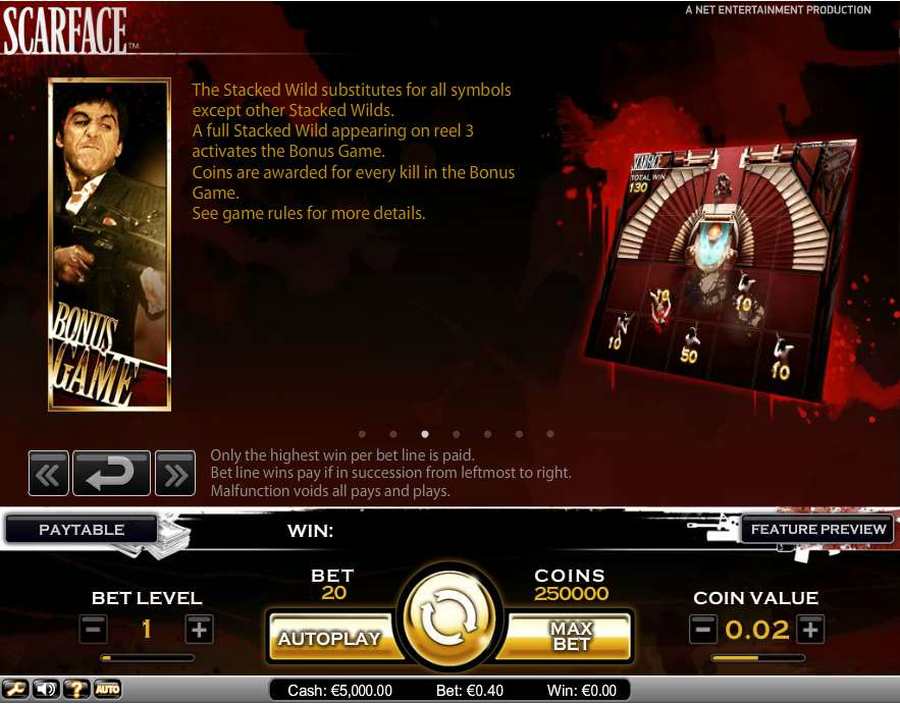 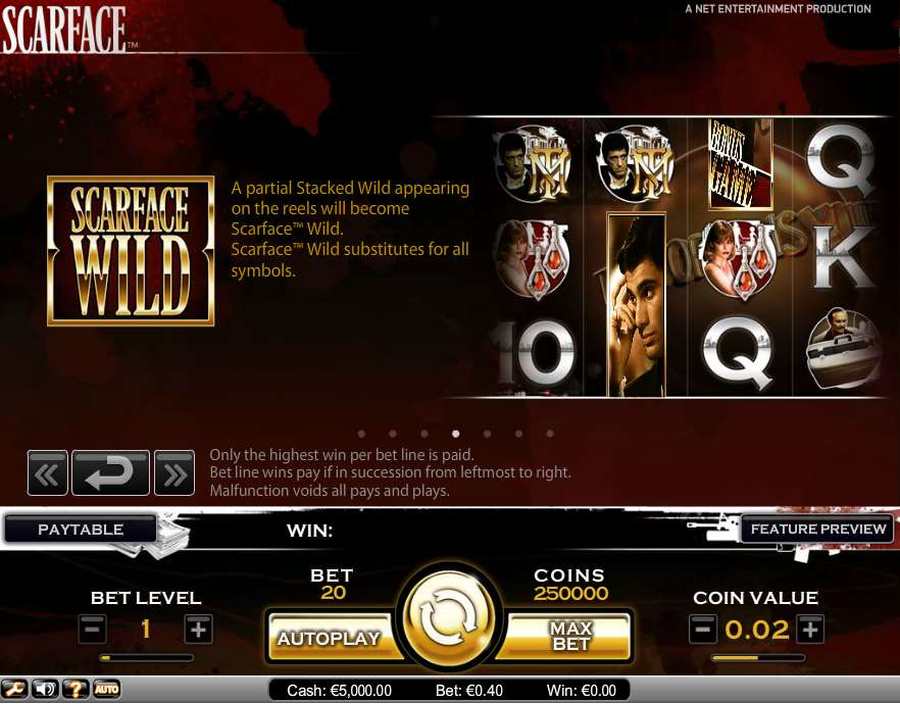 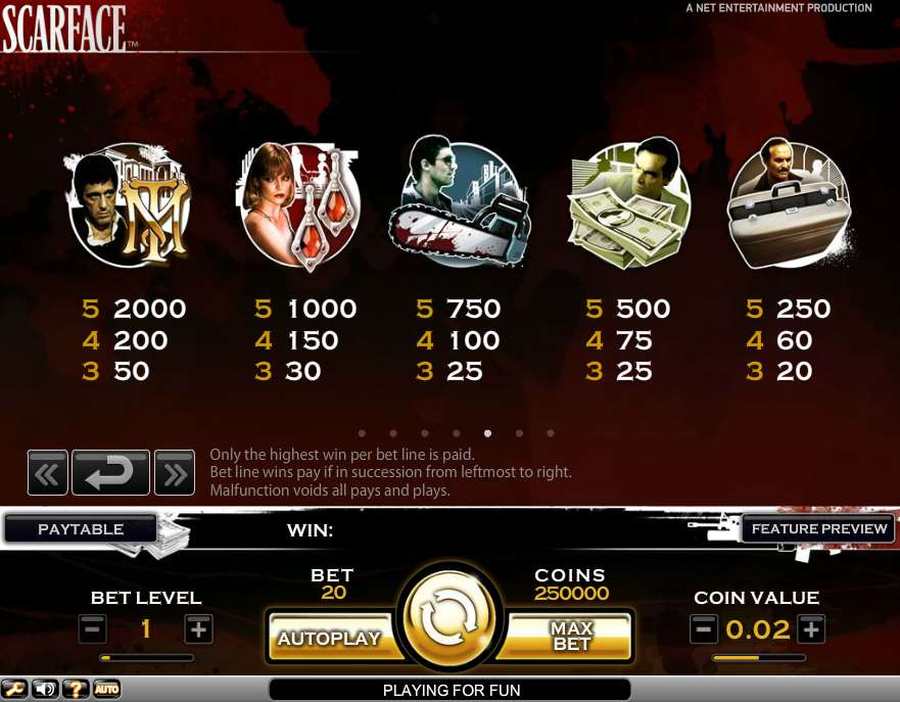 Scarface is a non-progressive 5 reel 20 pay-lines video slots game from net entertainment, it has a gangster theme, and features a wild symbol, free spins and has a maximum jackpot win of $10000