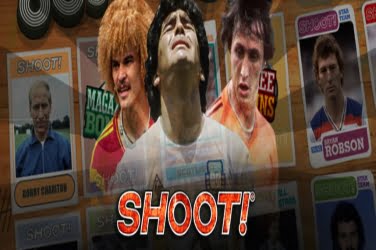 Microgaming created the Shoots slots game with the avid soccer fan in mind. Gamers can enjoy seeing the faces of some of the most famous soccer players in history across its 5 reels. Using old soccer card pictures which date back to the 1960s as the game’s symbols only add to the atmosphere of this online casino game.

The Shoot slots games have been themed around the Soccer Magazine Shoot that was once in publication in the UK. Players can find the likes of Pele, Gullit, Keegan, Best, and Cryuff used as just some of the symbols in the game. Other icons include a Soccer Ball, Soccer Rattle, and the all-important Meat Pie for halftime.

This particular Microgaming online casino game is popular among low rollers and beginners. This is due to the fact that the coin sizes used in the Shoot slots game are set a maximum of just $0.10. However, as the highest wagered amount is $100 per spin, the game can still prove appealing to some high rollers.

The Scoot Logo is the games Wild. In addition, there are 3 Bonus Games that can be activated through the Scatter symbol that appears in the Shoot slots game.

When the Shoot Logo appears on any of the 5 reels of this Microgaming online casino game, it can change any symbol other than the games Scatter. This can help to create more winning combinations across the 50 paylines that are available in the game.

Additional Bonus Features are on offer in the Shoot slots game. One of these is the Trade ‘Em Bonus Round. 12 pictures of famous soccer players appear on the screen, and the gamers are able to choose 4 of them. A set pay-out amount can be found at this point in the game, or an alternative Mini Game may be triggered.

There is also a Magazine Cover Bonus Round. 12 different Magazine Covers can be chosen from. 10 of these hide random pay-out amounts, the other 2 are Red Cards which when are revealed the round ends.

Random Free Spins can also be awarded at any point during the Shoot slots game. They can award the player between 10 and 35 Free Spins along with an additional 2x Multiplier on all winnings.

Players can begin the game of Shoot slots by placing a wager on any of the 50 winning paylines. They appear across the 5 reels of this Microgaming online casino game and all add to the player’s final payout amount.

Winnings can be increased when the Shoot Logo Wild symbol is revealed during game-play. These can change other symbols to generate more winning combinations for the player to take advantage of.

The Bonus Rounds are also a player’s ideal opportunity to add to their winnings. They can provide 2 Trade ‘Em Mini Games, or activate a number of Free Spins. All of these additional features are awarded when 3 or more Scatters upon the reels of the Shoot slots game.

Although the Shoot slots game may appear a little dated, this is mainly due to the fact of the age of the pictures used in its design. Players can embrace the atmosphere of a soccer match with the added sounds of the fans cheering in the stands whenever a winning combination is found.

It is possible to play the Shoot slots game in Expert Mode. Here the player is able to set the volume of the audio, and how fast the reels are spun. In this Mode, it is also possible to set the game to Auto-Play. Either setting the reels to spin automatically 5x or 10x or until the wagered amount is reached.

The Shoot slots game may not be appealing to many, but if players are enthusiastic soccer fans it is well worth a try. By keeping the coin size denomination as low as $0.01 to $0.10, players of all levels can enjoy this slots game from Microgaming. 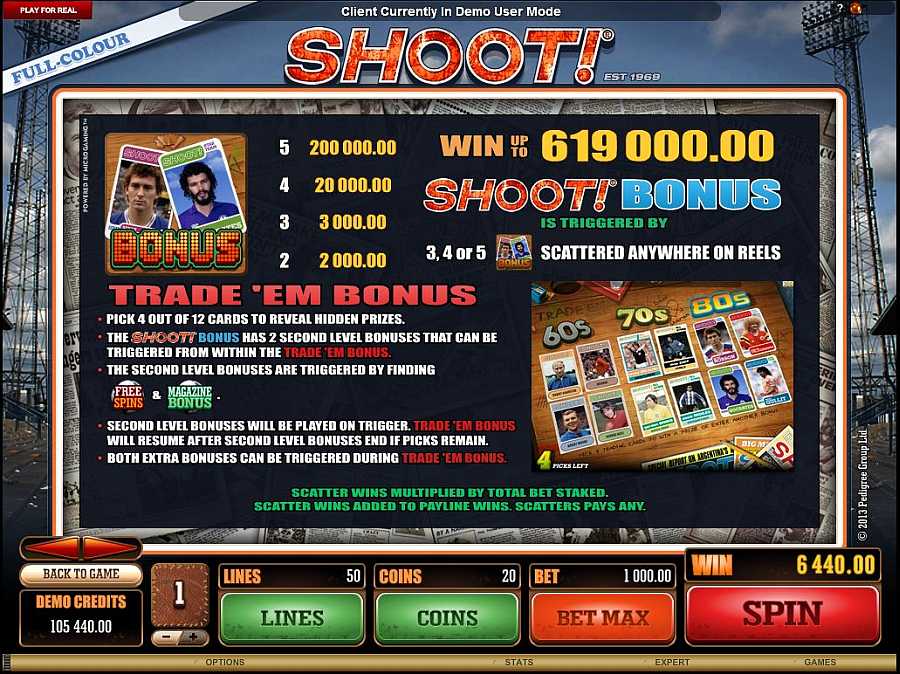 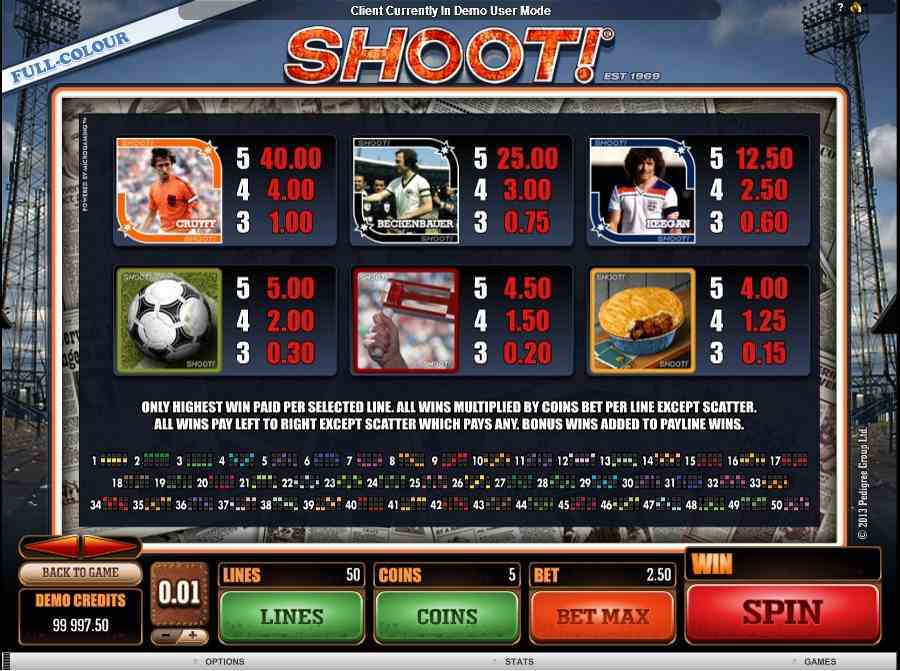 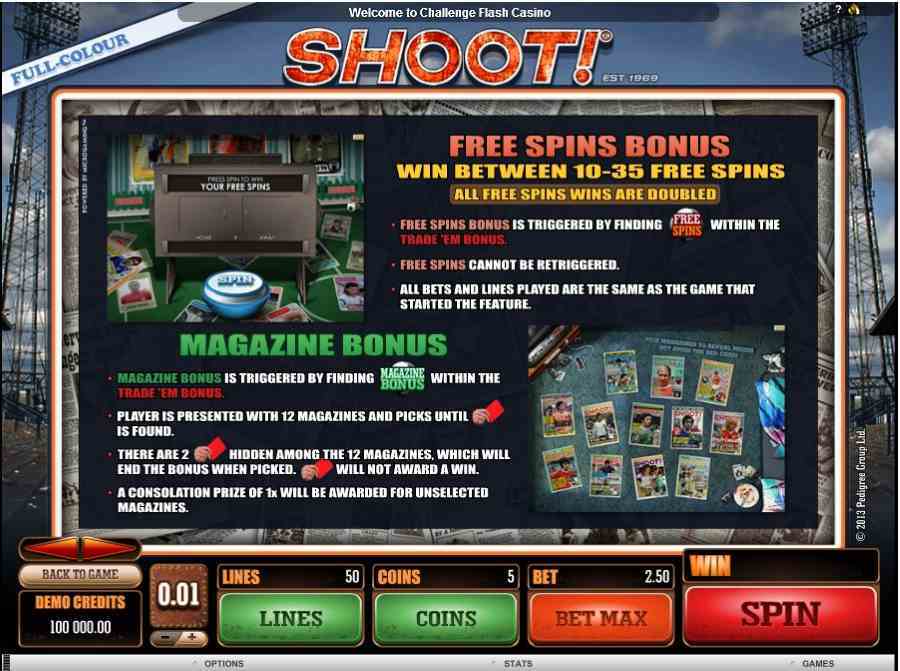 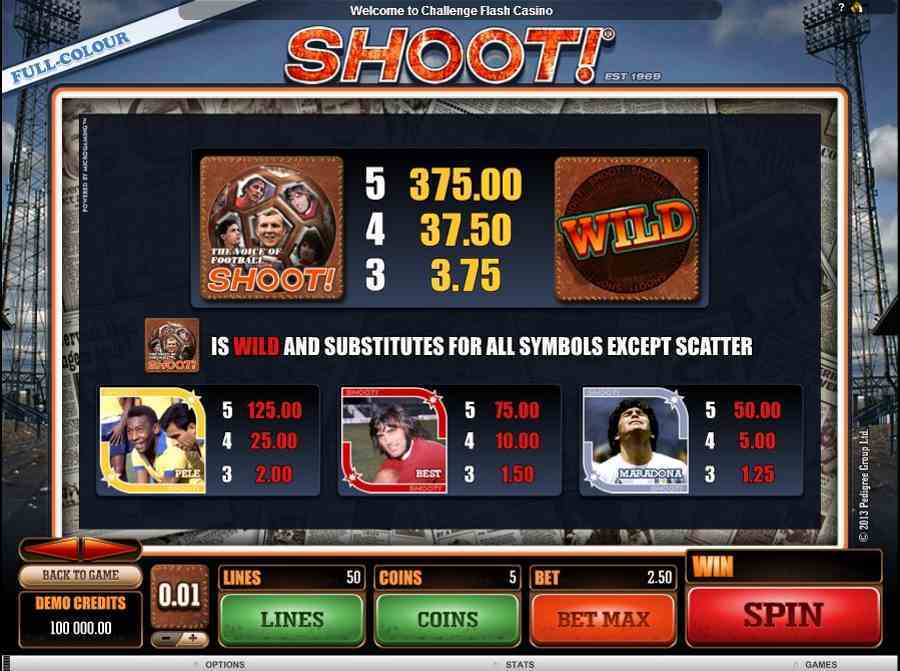 Shoot is a non-progressive 5 reel 50 pay-line video slot machine game from microgaming, it has a Soccer theme, and comes with a wild symbol, scatter symbol, free spins and has a maximum jackpot win of $20,000