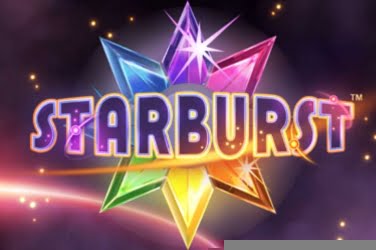 Starburst has become one of the most played in Net Entertainment online casinos since its release. Players are taken into space to find the 5 reels set upon a dark starlit sky in this Arcade themed game. The bold and chunky lettering and vibrant colors that have been used in its design perhaps reminding some players of the 1980’s fruit machines.

Everything in this game is about the Starburst Wild feature that has been included. Not only does this Bonus Symbol expand but players also benefit from up to 3 extra Free Spins as long as they continue to be found during this point in the game.

Some players are still accessing this fun slots on their Desktop, but Net Entertainment has also made it available on both Tablet and all Mobile devices. And the designers have included bright cheerful colors in their high-quality graphics to add to the player’s enjoyment throughout the game. There is also a relaxing soundtrack that provides a cosmic feel while the wheels are set to spin in the Starburst slots game.

Despite its name, the Starburst slots game has nothing to do with the British confectionary that was once known as Opal Fruits. Instead, players will find the 5 reels filled with different shaped Gems that are shown in Purple, Blue, Yellow, Orange, and Green shades.

Other symbols include a Gold “BAR” and the typical 7’s that are often found in more traditional slots designs from years gone by.

All are crisp and clear symbols that fill the reels to ensure that players have various opportunities to add to their initial wagered amount.

There is only 1 Bonus Symbol included in the game’s format and this is the Starburst Wild. It is shown as a Multi-Colored Star that can only appear on the 2nd, 3rd, or 4th reel. When just 1 of these lands it will expand to fill the reel and the other reels will be re-spun.

This Bonus Feature will continue until no more Starburst Wilds are found and then players are returned to the base game to generate more winning combinations.

However, there is the chance that the player could reveal all 3 Starburst Wild symbols and if this happens they will see up to 50,000 credits being added to their jackpot balance

All 10 winning paylines need to be in play in this online slots offering but Net Entertainment has kept the coin denomination low. So whether the player has 0.10 or 100.00 to wager they can see their jackpot balance grow as the 5 reels spin. However, although it is a low-risk game it has a Medium variance that rewards an RTP of approximately 96%.

Some players may consider this online slots rather dull as there is only the Starburst Wild symbol that provides more chances to add to the initial wager. But not only does this symbol expand on the reel upon which it lands, but freezes in place for an additional Free Spin. A maximum of 3 of these can be claimed as long as the player continues to reveal more Wilds.

Players can reveal winning combinations in both directions. So although 10 paylines may not sound a lot they can reward more chances for players to add to their final balance. And with each win strobes of light burst from the screen which provides some extra entertainment for them to enjoy.

This is a fast-paced game that has a simple but fun format and with 10 winning paylines, various winning combinations can be found. But if the player needs to be away from the screen there is an Auto Play Feature to utilize. So at any time, the 5 reels can be allowed to spin automatically either by allocating the number of turns or the maximum wager that the player wishes to place.

As there isn’t a Jackpot Balance or the chance to double any winnings with a Gamble Feature some regulars to Net Entertainment casinos may find this rather disappointing. Others may miss the fact that no Mini-Games have been included. But with regular opportunities to activate the Starburst Wilds, some big wins can be claimed throughout the Starburst online slots game.

– Play Starburst here with a free spin or visit NetEnt Casinos to play for real money. 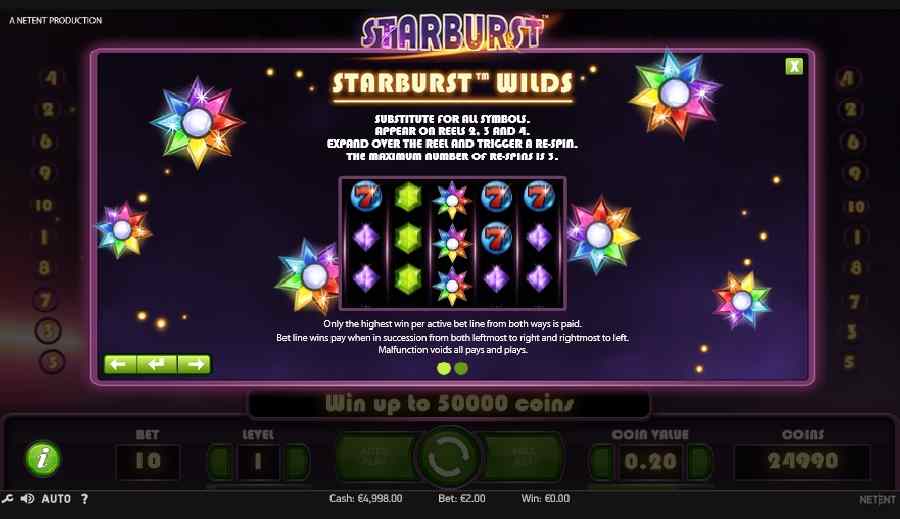 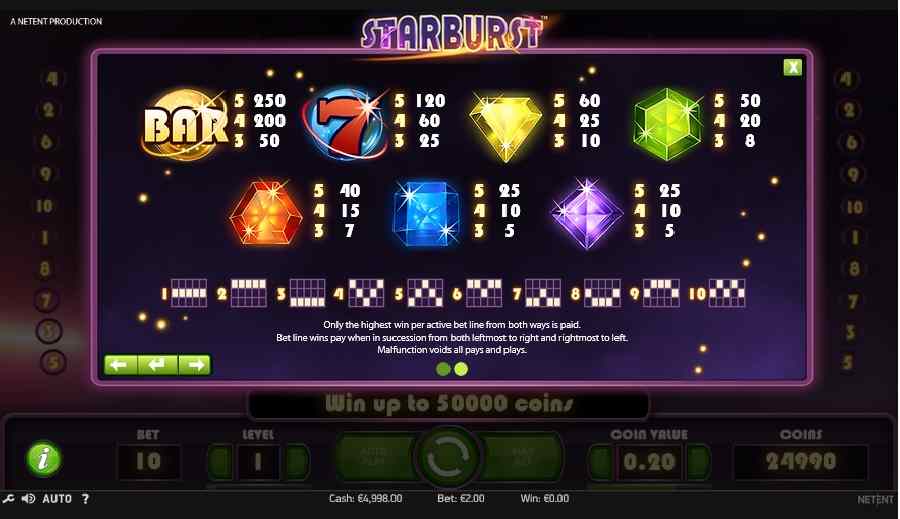 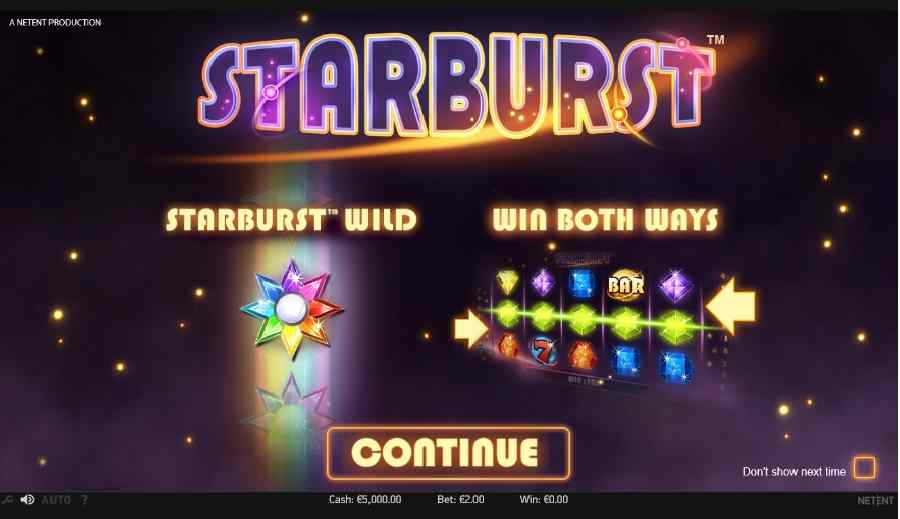 Starburst is a non-progressive slot game with an Arcade theme. It has 5 reels 3 row and 10 fixed paylines video slot machine from Net Entertainment. Slot features include starburst wild with re-spins, and win both ways, Scatter wild symbol and has a maximum jackpot win of $2500