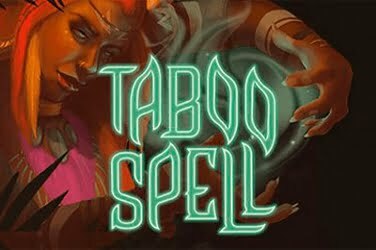 This Microgaming online casino game has an eerie feel to its design. In Taboo Spell slots players can enter a jungle filled with snakes and creepy looking trees. There they will find 5 reels set in darkness, the only light coming from the tribal torches which stand on the cave walls at either side. Players can also enjoy the creepy tunes which are in the background to add to the atmosphere.

Witch Doctors and Voodoo are the themes for the Taboo Spell slots game and the symbols used to reflect this. These include a Skull, a Crocodile, Tiki Masks, a Tribal Princess, and a Witch Doctor. Even the 9 – A symbols have jagged edges which add to the feel of the game.

The Taboo Spell Logo is used as the Scatter symbol throughout the game. Also, players can find a Pin Cushion Doll upon the 5 reels of the game which act as Wilds.

There are plenty of opportunities to win in the Taboo Spell slots game. These are given with the numerous Multipliers, Jackpots, and the Free Spin Bonus Round.

A Pin Cushion Doll is a Wild symbol in the Taboo Spell slots game. It is able to change any symbol other than the Scatter. This gives the player more opportunities to create a winning combination during each spin.

The Wild symbol also provides the highest paying jackpots that are awarded in Taboo Spell Slots. These range from 2, 100, 750, and 1000 coins depending on how many Wilds are revealed.

A Taboo Spell Logo is used as the Scatter. In the Taboo Spell slots game is provides a 50x Multiplier when just 2 of them appear upon the 5 reels of the game.

Unusually for Microgaming, the Scatter doesn’t activate the Free Spins Bonus Round. This is random, which the players will become aware of when the Witch Doctor appears at one side of the screen.

There are 6 Free Spins awarded for the player to enable them to further add to their winning amount. At this point, any Tiki Masks or Crocodile symbols will also become Witch Doctor symbols, which also can increase the player’s Jackpot in the Taboo Spell slots game.

Another benefit of the Witch Doctor symbol is the additional coins that it offers. Should players locate these during a spin they can add 50, 10, 5, or 2 coins to the balance respectively, depending on how many are revealed.

Before the Taboo Spell slots game can begin players need to decide how much to wager. Using coin sizes from $0.01 to $0.20 with a maximum $150 on each spin this Microgaming online casino game is popular with high rollers.

With 25 winning paylines in this 5 reel game, there are plenty of chances of adding to the final payout amount. Players can do this when the Wilds, Scatters, Free Spins, and Multipliers that Taboo Spell slots offer to appear.

Wilds can help to create more winning combinations, while the Scatter awards the player with a Multiplier. The Free Spins appear randomly in the Taboo Spell slots game, allowing 6 further chances for the player to add to their winnings.

Although the Taboo Spell slots game doesn’t have a progressive jackpot, with its many winning combinations players can still win big in this Microgaming online casino game. With its eerie design and spooky music, there is a real scary atmosphere to Taboo Spell Slots.

However, it is possible to play the Taboo Spell slots game in Expert Mode. Here the player can set the reels to spin automatically if they don’t wish to be more interactive with the game. Alternatively, the game can be set until the wagered amount is reached. 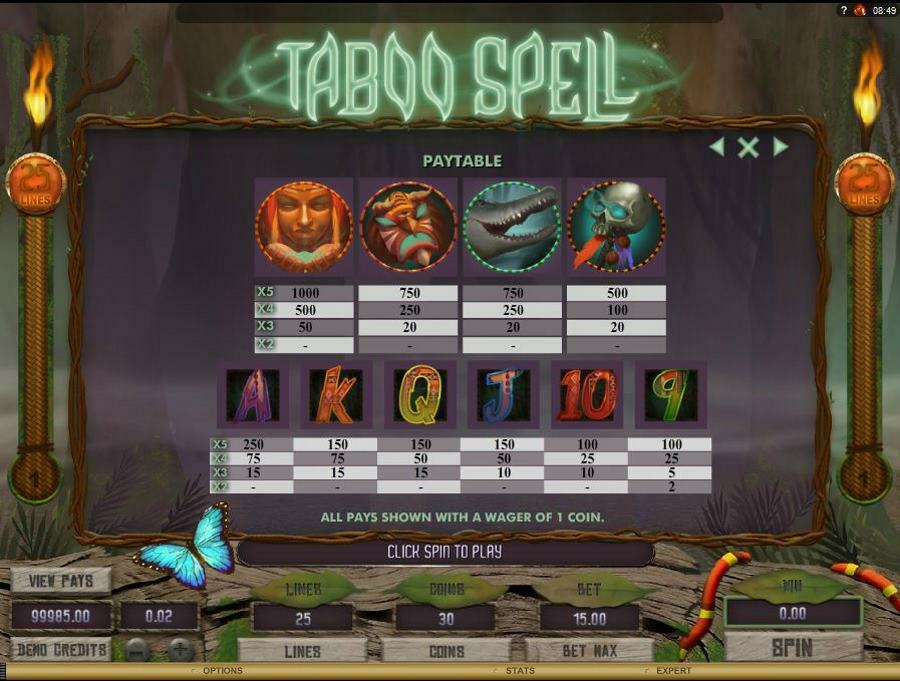 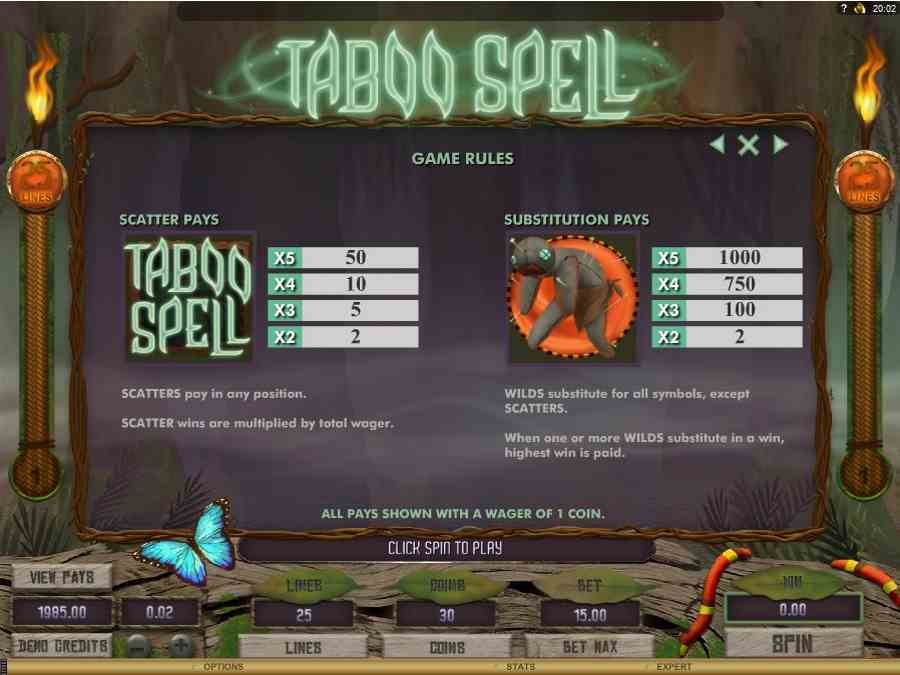 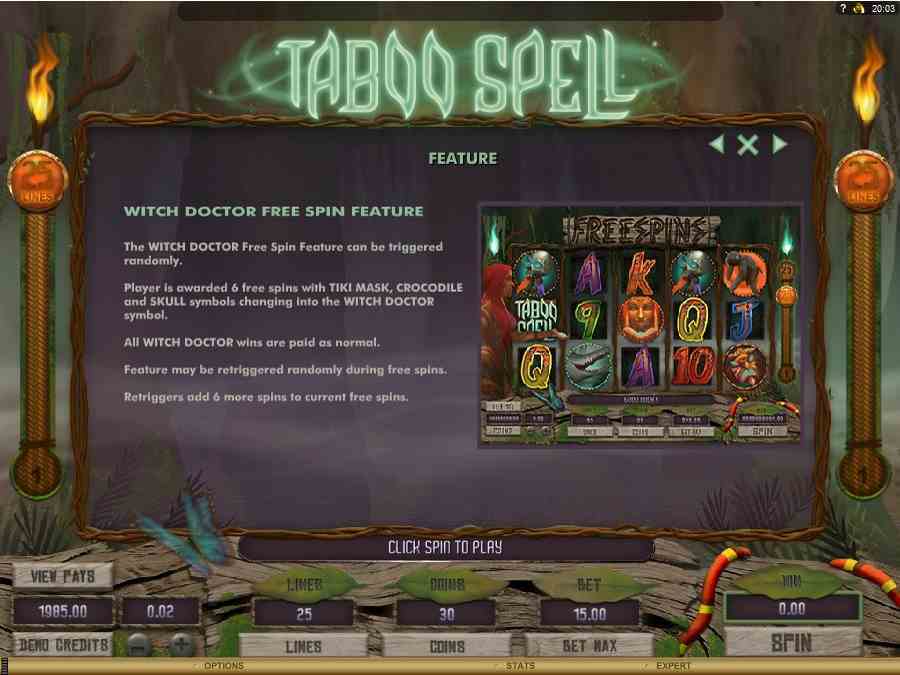 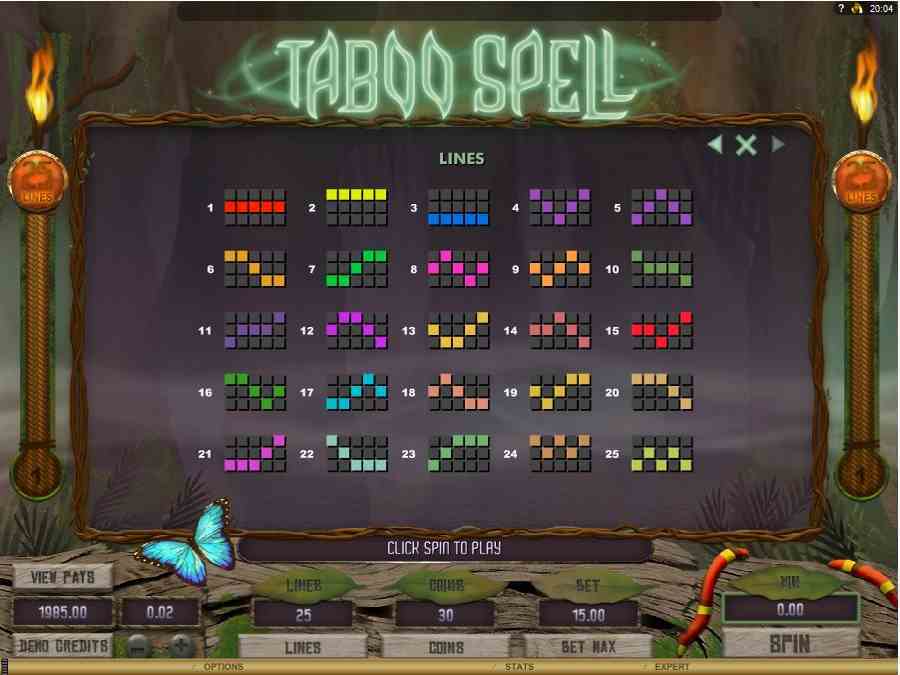 Taboo Spell is a non-progressive 5 reel 25 pay-line video slot machine game from microgaming, it has a creepy theme, and comes with a wild symbol, scatter symbol, free spins and has a maximum jackpot win of $1000.