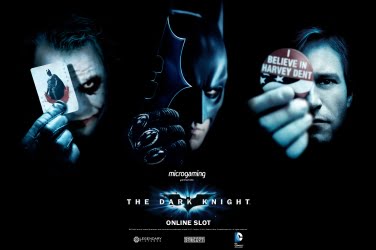 Based on the 2008 movie of the same name the Dark Knight slot’s game has a Batman theme. The game was released in 2012 and uses characters from the movie as its symbols. Microgaming have also incorporated an additional feature within the games design. This can be seen by players when a winning combination is found and will show clips from the movie. However if players find this element of the game rather distracting it can be deactivated at any point.

There are 5 reels in the Dark Knight slots game that players will find located in the center of a dark colored screen. The frame in which they are set and lettering’s used have been given an electric blue shade to add to the feel of the game.

Dark Knights slots has 30 pay-lines, all of which must be activated during game-play. However there are up to 243 winning combinations to be found across the games reels which can help to increase the final pay out figure.

Movie quality pictures of the characters from the Dark Knight movie are used as symbols in this slots game from Microgaming. Yet it is the Joker Scatter symbol which provides the main Bonus Features in the game.

When 3 or more Joker Scatters are spun the player will be awarded with 15 Free Spins. In addition to this all winnings will receive a 2x Multiplier to increase the jackpot amount even further.

During this Bonus Round the Joker may randomly appear again, providing players with extra Free Spins and a Multiplier of up to 5x the amount wagered.

Another feature included with the Joker Scatter will be awarded to players should they spin 5 of this symbol at any point during the Dark Knight slots game. Here the player will receive 15,000 coins to be added to their jackpot balance.

The Dark Knight Logo is the Wild symbol in this online casino slots game. As regulars to Microgaming creations will know, this symbol can change others to create more winning combinations for players to take advantage of.

In addition to this Logo Wilds can also appear randomly and become stacked to fill the full reel upon which it has landed. This can provide players with more chances of revealing a winning pay-line during this Microgaming online casino game.

Darkened 10 through to Ace symbols offer the lowest pay outs if they are used as part of a winning combination in the Dark Knight slots game.

An unusual twist to this release from Microgaming is that it has 4 Progressive Jackpot amounts for players to claim. However, the opportunity for this to occur is purely random and will activate a small Bonus Game. Here players must choose which side they want to win, either Batman himself, or the Joker.

The lowest Jackpot figure will award players with at least $10.00, this then increases to a minimum of $100.00. However, there are 2 higher jackpot amounts on offer in Dark Knight slots. This can see players claim at least $10,000.00 and an amazing $1,000,000.00 if the highest Progressive Jackpot is awarded during the game.

Such coin denomination options does result in pay outs being rather low in the Dark Knight slots game. But as there are 243 winning combinations and 4 Progressive Jackpots this particular offering from Microgaming is appealing to players of all levels.

Players can also find Wilds, Scatters, Free Spins and Multipliers throughout the game of Dark Knight slots. These offer players with further opportunities to increase their final winning amount.

Any fans of the Dark Knight movie can enjoy the highly detailed design which has been used for this online slots game. Not only can players watch clips from the movie, the character symbols become animated and cheer if a winning combination is found.

In addition to this there is music which was used in the movie to be heard playing in the background during the Dark Knight slots game. All of these factors add to the electrifying atmosphere which Microgaming has created.

You can win one of four guaranteed progressive jackpots in the randomly activated Progressive Jackpot bonus game. 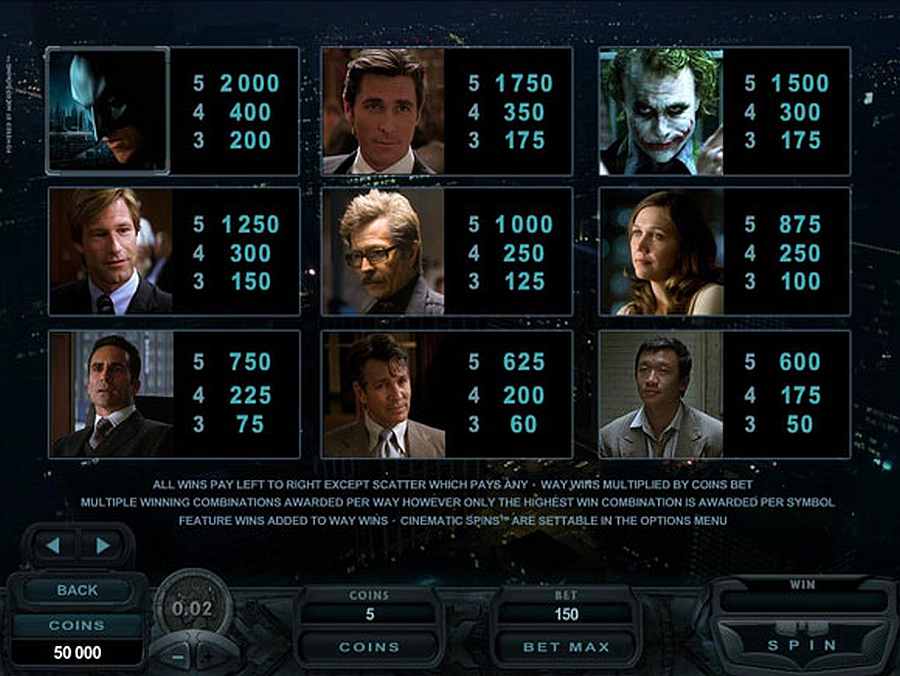 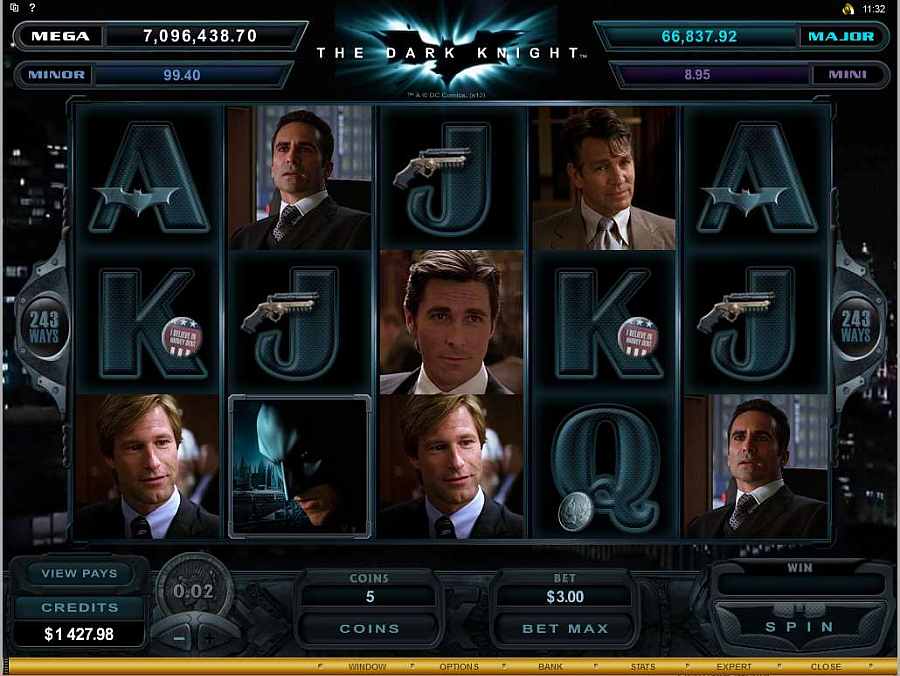 The Dark Knight is a progressive 5 reel 243 pay lines 3D video slot from microgaming, it has a batman theme, and comes with a wild symbol, scatter symbol, free spin and has a maximum jackpot win of $600