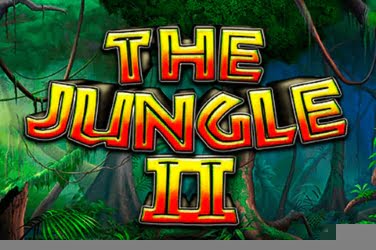 Back in 2011 The Jungle slots was released and due to its popularity Microgaming added this sequel to its online casinos in 2013. Since then it has gathered a following of players of different levels who enjoy the fun elements that have been included in the game.

Within a Jungle setting this online slots game has a Safari theme with the 5 reels set upon its scenic backdrop. Players can view a sunset sky at the top of the screen which lights the trees and grasses that surrounds the frame that encases the reels.

Microgaming have used clear crisp 3D graphics and the main characters become animated when a winning combination is revealed. However these graphics are considered rather poor compared to the company’s other releases. Yet still to enhance the games theme the designers have also included African style music to play in the background, adding to the atmosphere that they have created.

Players can find this slots offering at any time and no matter where they be. This is due to the fact that the game can be accessed through Desktop, Tablet and Mobile devices. Meaning that this latest release from Microgaming is proving appealing to many players who enjoy online casinos.

The Jack through to Ace symbols that are often found in online casino games have been given a chunky appearance and Microgaming have used bold colors in their design.

Higher paying symbols include a pair of Binoculars, a colorful Parrot, a Drinking Flask, a Red Jeep and a Tiger. There is also a dramatic looking silhouetted scene of various Animals shown in a Purple hue.

An image of a male Explorer with an unshaven chin awards players with the main jackpots in the game and just 2 of these symbols need to be spun for a pay-out amount to be given. 2x Explorer symbols will see 10x the line bet being added to the jackpot balance. This increases to 100x, 1000x up to an amazing 10,000x if all 5 reels are filled.

It is a symbol of an Elephant that acts as the Scatter within the game and again players only need to locate 2x to receive a Bonus Multiplier. This ranges from 2x up to 100x the initial wagered amount depending on how many are revealed during the spin.

A Female Companion icon is used as a Bonus symbol although it can only be found on the 2nd, 3rd, and 4th reel. However when all three appear at the same time then a Free Spins Bonus Round will be activated for the player to take advantage of.

When this point of The Jungle II slots game is reached then players are taken to a 2nd screen where they will find a Wheel of Fortune. Setting this to spin awards a random amount of spins which ranges from 15x to 100x. And although this round cannot be re-triggered it does allow winning combinations to be created from right to left as well as left to right.

In this particular slots game there are 25 winning paylines which all need to be in play during each spin. However Microgaming have kept the coin sizes to a minimum of 0.01 to still make the game appealing to low rollers. Yet high rollers can still enjoy this online casino game with a maximum of 5.00 able to be placed on each line.

Unusually there is no Wild symbol included in the games design, but there are other Bonus Features to help keep players entertained. They can find an Elephant Scatter which awards various Multipliers, along with the Female Companion who can activate the Free Spins.

Also there is no Progressive Jackpot, Mini-Games or Gamble Feature to be found in this online slots game. And although this format may be disappointing for some there are still those who are drawn to its Safari theme and the massive jackpots that can be claimed through the intrepid Explorer character.

There is also the option for players to access the Auto Play mode. Here they can set the reels to spin automatically while they are busy doing other things. Then they may come back to the screen with the hope of seeing a healthy return on their initial wagered amount.

Some players may consider this offering from Microgaming online casinos dull and play rather simple and easy. However there are many players from around the globe who are enjoying The Jungle II slots game. 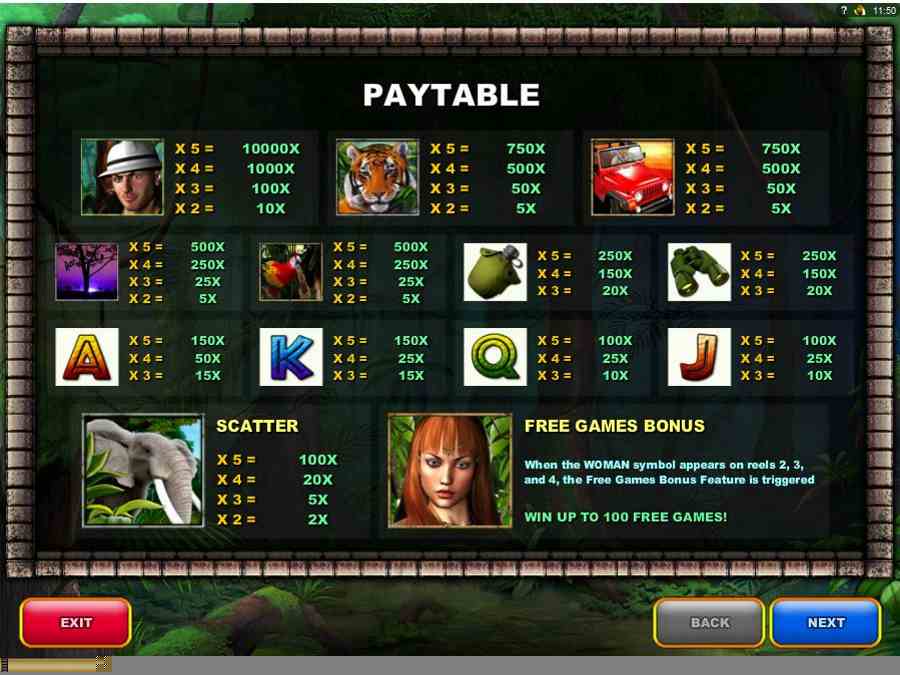 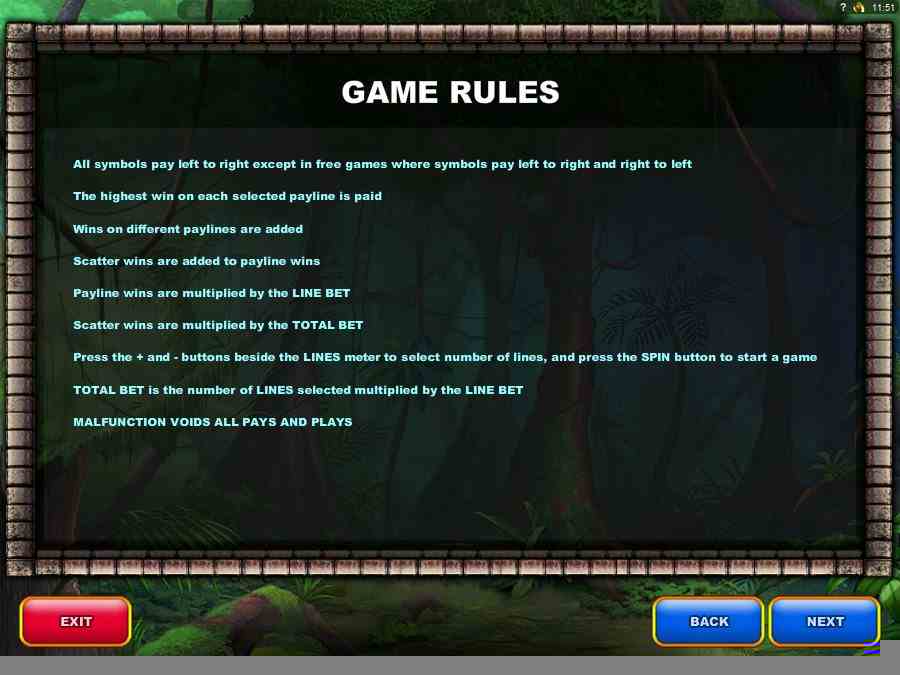 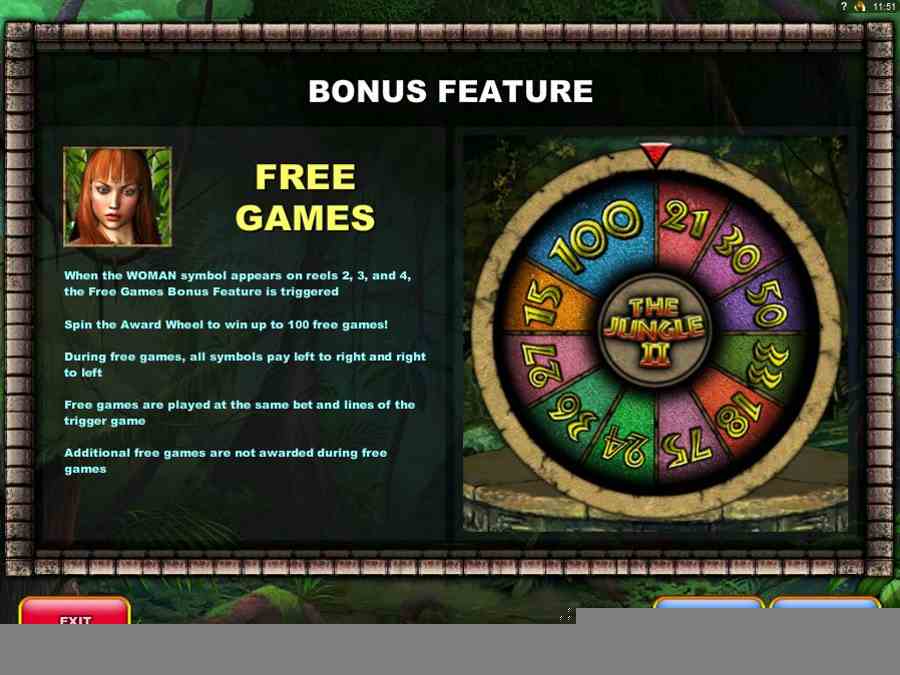 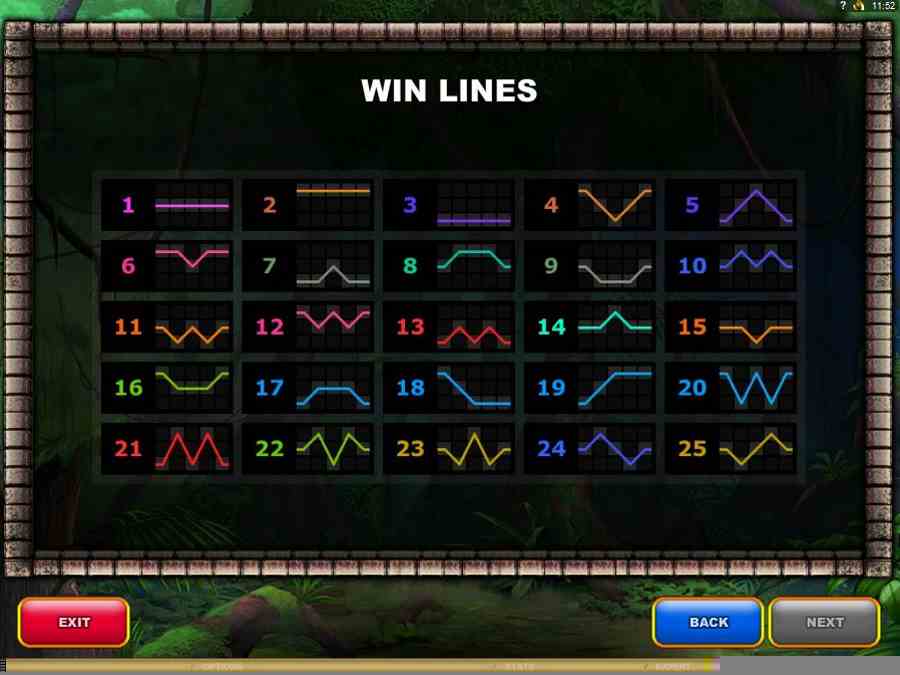 The Jungle II is a non-progressive 5 reel 3 row 25 pay-line video slot game from microgaming, it has a Safari theme, and features a wild symbol, scatter symbol, Multiplier, free spins and has a maximum jackpot win of n/a