The Phantom of the Opera Slot Review 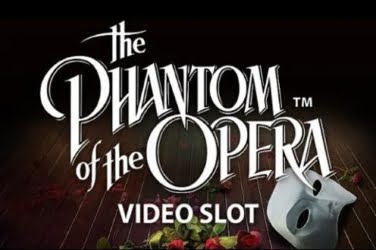 Andrew Lloyd Webber based his award winning Musical of the same name on the novel written by Gaston Leroux in 1909. It tells the tale of a mysterious man who roams the darkened corridors of the Palais Garnier and then falls in love with a beautiful lady called Christine.

With this as their inspiration the designers have set the scene within a theater where the players feels as if they are looking out into an empty auditorium. The seats and balconies filling with people during the Bonus Features of the game to add to the dramatic atmosphere. As the 5 transparent reels spin there is a spooky feel to this slots game as the beautifully detailed symbols appear on the screen, something that is further intensified by the classical music that plays throughout.

Players can find 40 pay lines across the reels of the game but winning combinations can be made in both directions. This doubles the chances of a cash prize being added to the players jackpot balance. Something which has been enticing players whether they are using a Desktop, Tablet or Mobile device since the Phantom of the Opera slots game was released in June 2017.

The Phantom of the Opera Slot Features

The Heart, Diamond, Club and Spade symbols are all in silver but have a thin delicate frame of different colors. For higher pay outs players need to find symbols such as the Dagger, a Sapphire Ring, the Hand Mirror or a Yellow Rose.

An image of the character from the musical known as Christine is another symbol that can be found upon the games reels. But it is the Phantom who is in love with her that provides players with the highest jackpot balance of 15x their stake should all 5 of the symbol land after a single spin of the reels.

Wild – this is the Masked Phantom symbol and when he appears on the screen any Basic image can be altered. They are substituted so that more winning combinations can be created and can fall often throughout this online slots game.

Scatter – shown as Chandelier this symbol will only land on the 1st, 3rd, and 5th reels of the game. However should all positions be filled then a Bonus Feature is activated for the player to take advantage of.

Stacked Bonus Symbols – these are all encased in a gold frame to that the player is aware of the difference from any basic symbol. Also they will now know that they will be rewarded with an additional Bonus Feature.

Free Spins – this Bonus Round is activated when 3 Scatter symbols are located on the reels but the Net Entertainment designers have given it a unique twist. Rather than being given a set amount of Free Spins instead players will see a Chandelier at the top of the screen with a rope attached to each reel. Should either of the Phantom symbols land on a reel it will reward with an additional Feature but will also cut the rope. Once all 5 ropes have been cut the Bonus Round will end.

If the Stacked Phantom is brought into play then it will become Wild and remain in its position until this element of the game ends. However the Masked Phantom will become “stacked” to fill the reel upon which it landed to give players more chances to create a winning combination.

Masked Phantom Re-Spin – here the player needs to find the Stacked Phantom symbol on the 1st reel along with the Stacked Mask on the 5th. Now both symbols change to “sticky” Wilds and 1x Re-Spin is rewarded to the player with the hope of generating another win.

Pick and Click Feature – for this 2 stage Bonus Feature to be given the player must locate the Stacked Phantom on the 1st reel and his beloved Stacked Christine on the 5th. Now players are taken to a 2nd screen where they are able to select from 8 Roses. A random cash prize is revealed each time until the “X” symbol is uncovered and then the player is moved on to the 2nd Round. Here they can choose from 3x Hand Mirrors to claim a Multiplier which is then added to the cash amount before the final figure is included in the jackpot balance.

The Phantom of the Opera Game Play

Players can use the +/- button to alter their initial wager between 0.20 to 200.00. This means that this online slots can be enjoyed by players with any budget. There is also an Auto Play Feature that can be accessed should they need to be away from the screen at any point.

There is plenty to keep players entertained throughout this slots game as there is a Wild, Scatter and various Stacked Symbols which can lead to the 3x Bonus Features that Net Entertainment have included in its format.

The Phantom of the Opera slots is a Medium variance game that provides a RTP of 96.57% and will be appealing to numerous players from around the globe who want to embrace the theatrical theme.