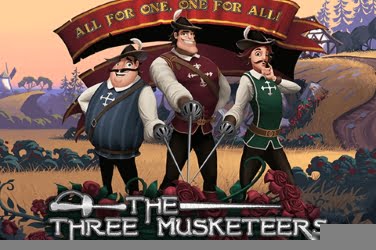 This Quickspin game has been based on the French novel of the same name which was penned by Alexandre Dumas. It tells the tale of 3 legendary young swordsmen who develop a certain camaraderie while fighting for justice back in the 17th Century.

Since then this theme has been adapted into TV programes and Movies and various online slots game. This is Quickspins version which became available to players in December 2014 and it has proven popular with both high and low rollers ever since.

There is a dark mysterious look to the 5 reels which are set within a black decorated frame. Players can see a typical French countryside scene with a dirt path, trees and brambles in the background as flowers grow up the sides of the reels while they spin.

All of the graphics are of the highest quality and the character symbols have been given a detailed appearance. This along with an engaging soundtrack there is plenty to keep players entertained in this casino game that has a fun cartoon-like feel to it.

Players can enjoy all that there is on offer in this online slots whether they are using a Desktop or Tablet. And nothing is taken from the smoothness of the game even when using a smaller screen on a Mobile device. So even if players only have a few minutes spare they can take a trip back in time in The Three Musketeers slots game.

Designed in a distinctive bold font players can find Jack through to Ace symbols upon the reels during the game. And although they only offer a small paying amount they do appear often throughout play to help increase the final balance.

Higher paying symbols include 3 characters from the tale. These are Monsieur de Treville, Cardinal Richelieu and Milady de Winter. Then there are of course the 3 Musketeers who are the stars of the game. So players can generate the highest wins possible if Parthos, Athos or Aramis appear on the reels.

Wild – a cheeky looking Jester is the Wild symbol and only part of his image needs to be located on the reels for them to change any basic symbol if it will generate a winning combination. However if the Wild expands to fill the reel players can also benefit from a 1x – 3x random Multiplier to be included in their jackpot amount. And the more Wilds that land will mean a higher winning balance for the player to claim.

Scatter – this symbol is shown as a Sword and 3 or more of these need to be found for the Free Spins Round to be activated.

Free Spins – 3 Bonus symbols will initiate 10 Free Spins. 10x Free Spins are awarded when this element of the game comes into play. However players can also take advantage of various additional Features that are included in this Bonus Round. The first of these is a 3x Multiplier which is included in any pay out amount.

Players will also see the symbols “nudge” up and down and an extra Multiplier Wild is added to the reels so that more winning combinations can be found.

The infamous slogan “One for all and all for one” is clearly shown in this part of the game as the 3 Main characters symbols are able to change other. This again in turn can generate more wins for the player to benefit from.

Although this Bonus Round can’t be re-triggered it does provide players with numerous opportunities to receive a high return on their initial wagered amount.

Wagers in this online slots game can range from 0.25 to 100.00 with each spin of the 5 reels. And as there are 20 winning paylines players are sure to see a return on their original stake. In addition they can find a Jester Multiplier Wild and a Sword Scatter that leads to an exciting Free Spins Bonus Round with various additional Features included in its design. All factors that make this casino game appealing to players of any level or budget.

For those players who need to be away from the screen at any time they can still return to a jackpot balance by using the Auto Play Feature. With this the reels can be spun automatically for a certain amount of times or until the maximum wager is reached. It is an element of the game which can prove useful when players are busy doing other things.

With a RTP of 96.64% there is fun to be had and numerous entertaining qualities for players to enjoy in The Three Musketeers slots game. 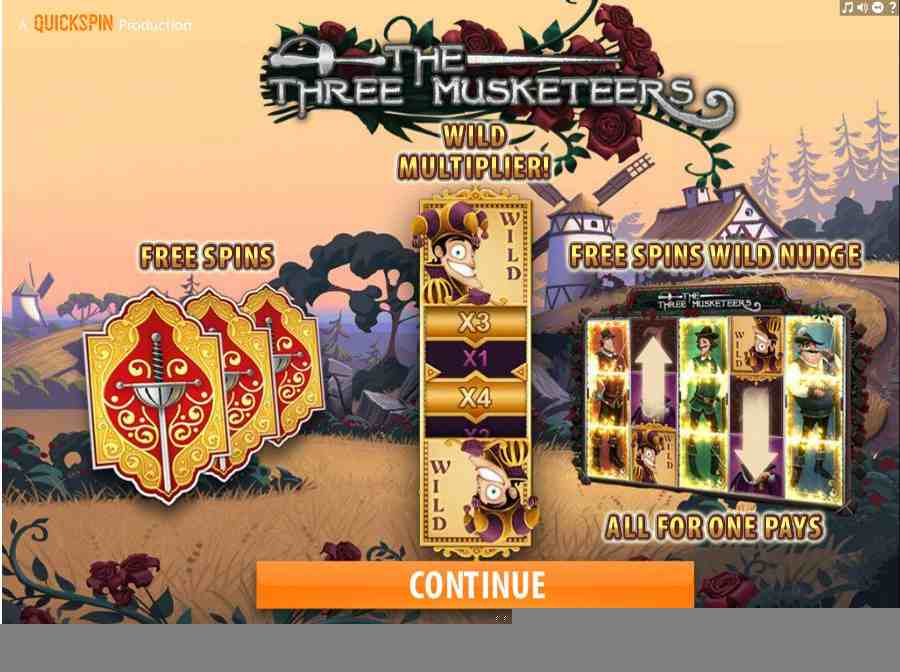 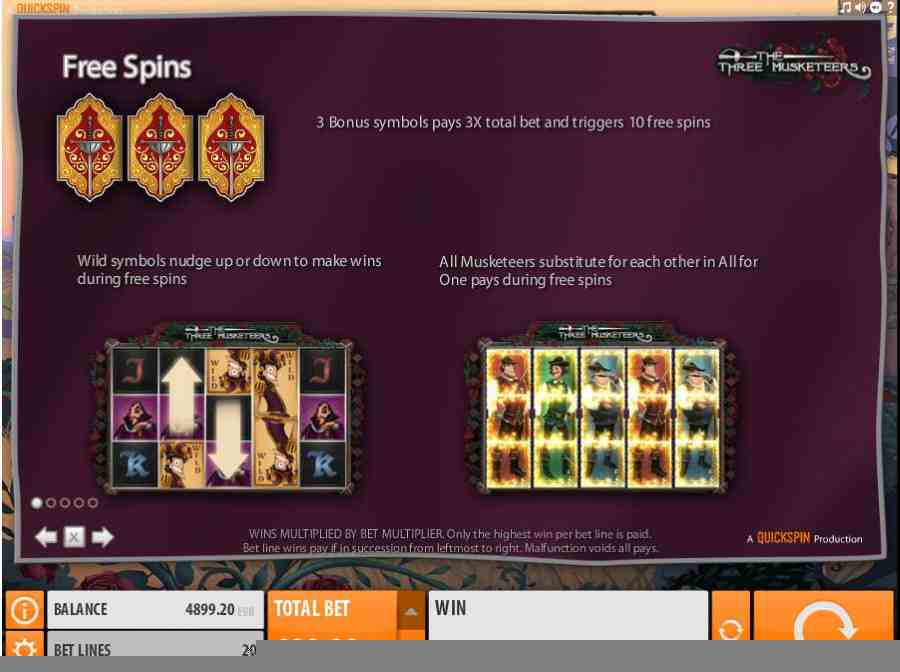 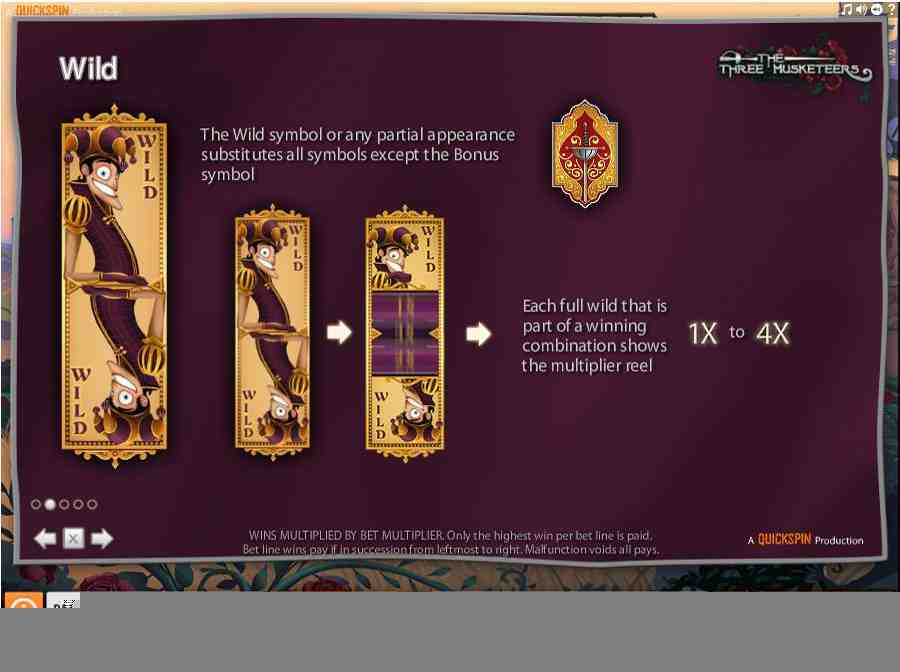 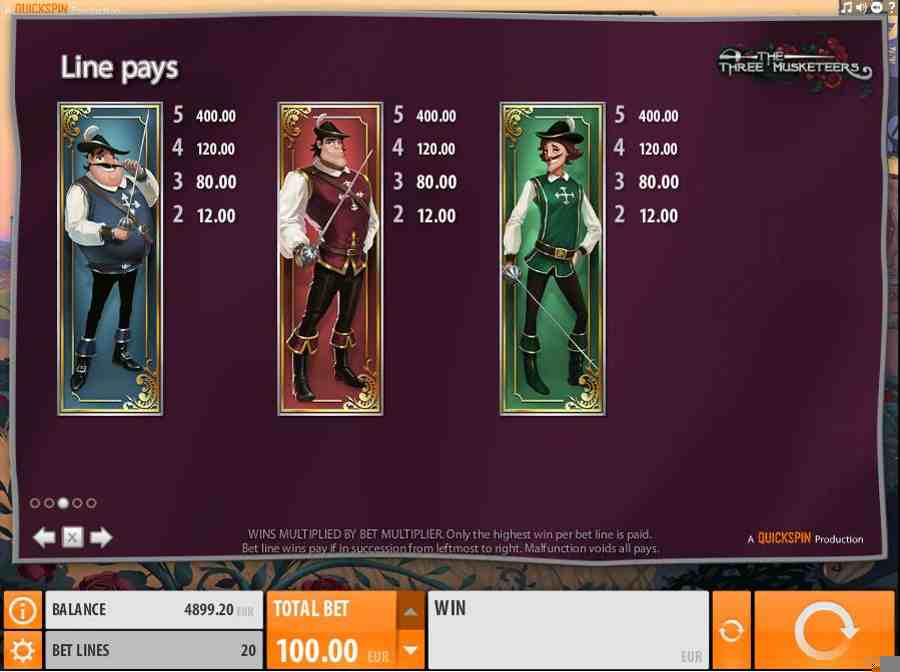 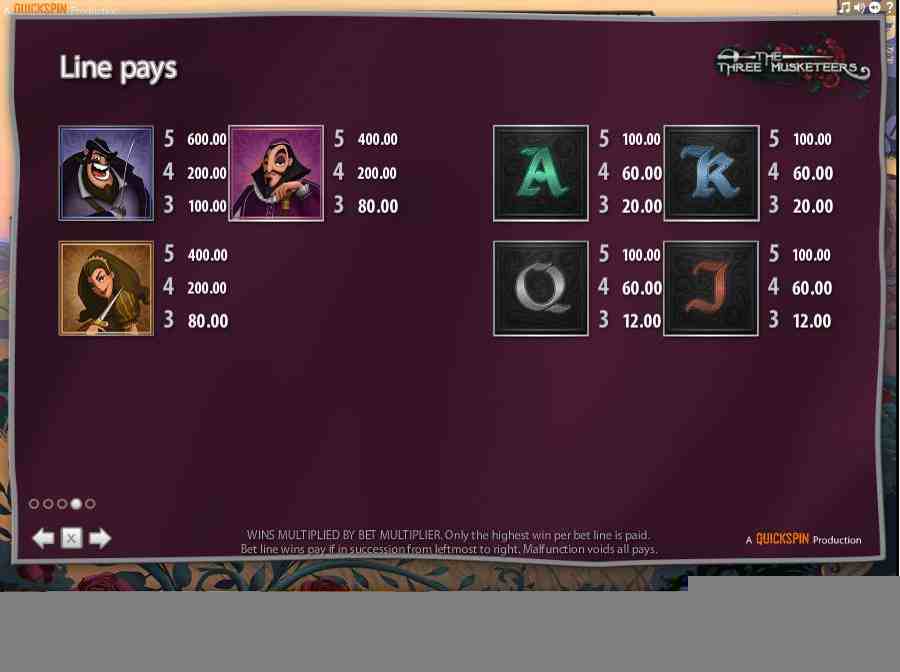 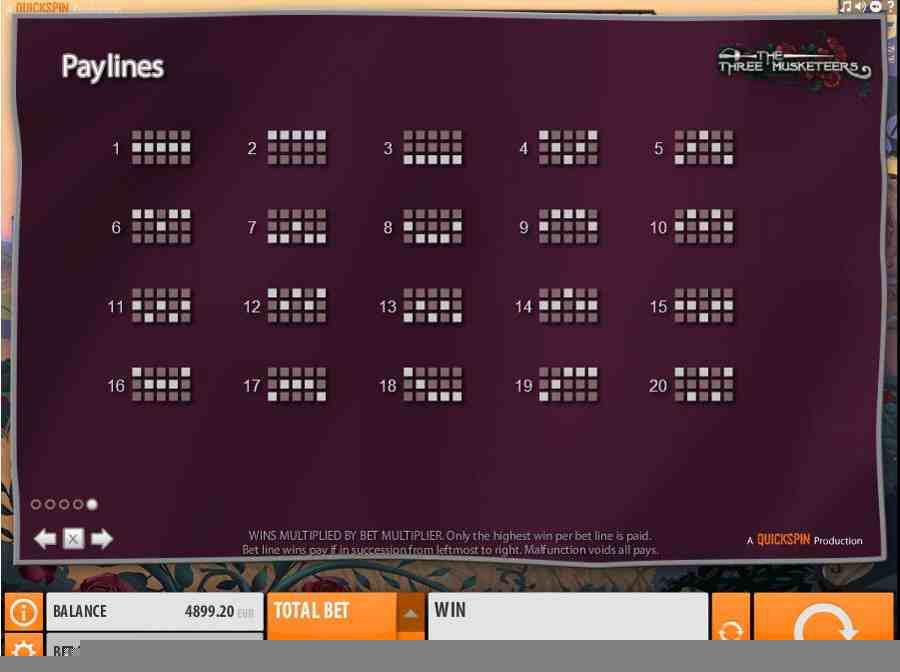 The Three Musketeers is a non-progressive 5 reel, 3 row, 20 bet lines video slot game from Quickspin, it has a adventure theme, The game features Free Spins with Wild Multiplier, Wild Symbol Nudge and the All for One feature, Free Spins and has a maximum jackpot win of $2000