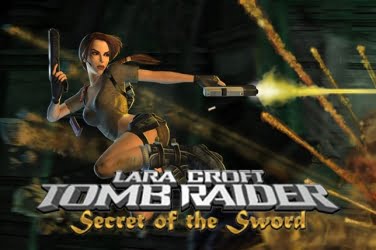 This is the second in the series that Microgaming have released with this popular Lara Croft theme. It has been given the additional title of “Secret of the Sword” to set the scene of the games story-line. The first version of  Tomb Raider can be played here

State of the art high quality graphics have been used in the games design and the sexy image of the main character is found throughout. The reels fill the majority of the screen with the stone wall of the Tomb glimpsed behind. Beautiful 3D images add to the atmosphere of the game along with stunning music and sounds.

As this particular online slots game is available on all Mobile devices Microgaming have ensured that players can access it at any time. And even though this means that the player will have to use a smaller screen, this fact takes nothing from the Tomb Raider II slots games layout.

The lowest paying symbols that are used are the usual 10 through to Ace icons which can be found in many online casino games. They have been given a chunky look, all in silver with a hue of color around each.

All other symbols are of Lara Croft herself. Players can find her flying through the air Shooting Guns, Scaling a Cliff, riding a red Motorbike, and wearing a Black Outfit with a city landscape in the distance.

There is a close up of the games Heroine which is the Wild symbol. When this appears it can change any symbol other than the Scatter. This means that players have more opportunities to add to their winnings. It also provides players with the highest jackpot amount should they be lucky enough to fill all 5 reels of the game. Here they will see 7500 coins for each original coin wagered being added to the pay-out balance which is proving appealing to high rollers.

Players have 2 chances to receive a Free Spins Bonus Round, both of which provide additional Features. The 1st of these will occur at random after a win during the base game and awards players with 5x Free Spins. Players will also find that other random symbols upon the reels will become Wild and remain Frozen in place until the Round ends.

The 2nd Free Spins are given through the Amulet Scatter symbol. When 3 or more of these are located the reels become Rolling throughout this Bonus Round. This means that each symbol what is used in a winning combination will disappear from the screen to be replaced by others. It is something that continues until the 10x Free Spins are over and can help to increase the jackpot balance even further. Along with the chance of up to a 5x Multiplier to also be included this Feature there are plenty of opportunities for players to add to their initial wager.

A Passport symbol can also be found upon the games reels and they must appear in the centre of each to be rewarded with the Global Adventure Bonus Round. Unfortunately this can take some time as this is an accumulating Feature. So players could find that it takes days or even weeks before this can be activated.

When the Passport symbol is located the reel is highlighted in Blue so players can monitor their progress. However if the “Stop” icon is spun all that have been saved so far will be lost and this element of the game will need to begin again.

Once the Global Adventure Bonus Round is reached players are taken to various locations on a second screen. They can travel with Lara to London, Nepal, Tokyo, Bolivia and Ghana in their quest to find shards of the Sword that they are searching for.

Players are then asked to choose between the various artefacts that are shown to uncover what hides behind. This can be Cash, some Hidden Treasure or a piece of the Sword. But should they reveal 2x Booby Traps then the Round will end and the player is returned to the base game in Tomb Raider II slots.

A coin denomination of 0.01 to 0.50 has been set in this online slots game. However up to 10x coins can be placed on any of the 30 winning pay lines that are found in this Microgaming release.

By providing players with Wilds, Scatters, Free Spins and Multipliers there are various entertaining Bonus Features to be taken advantage of. The fast pace action packed theme also continues with the Global Adventure Round that players may be lucky enough to activate.

Even though the Tomb Raider II – “Secrets of the Sword” slots game is low variance, the play it provides is still making it popular in many online casinos. 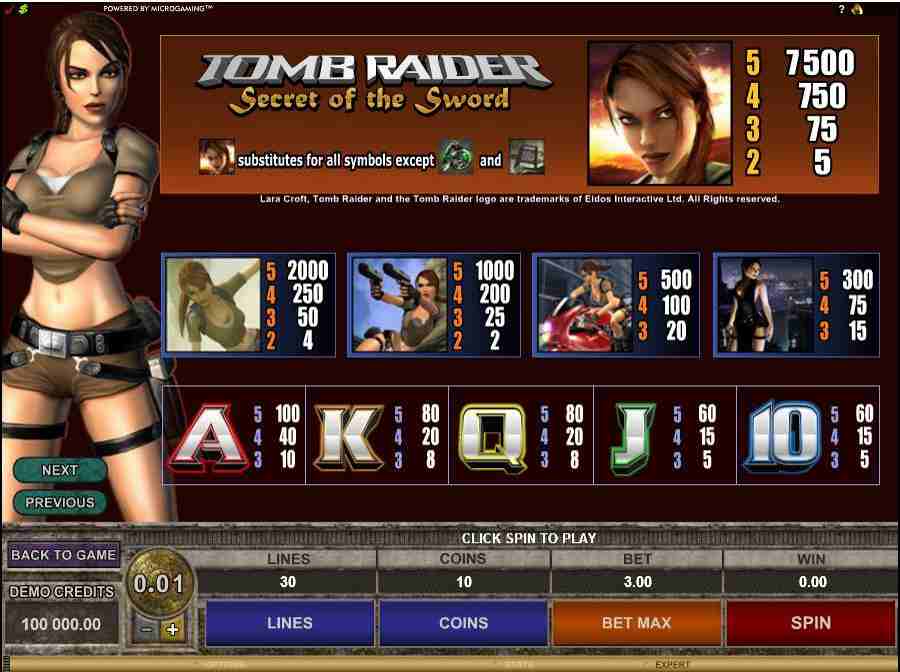 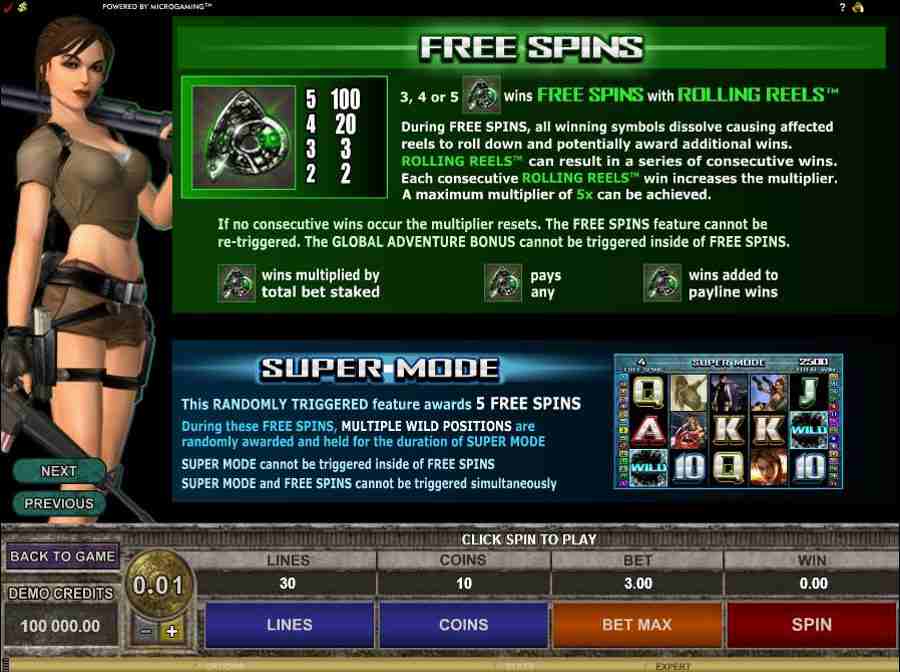 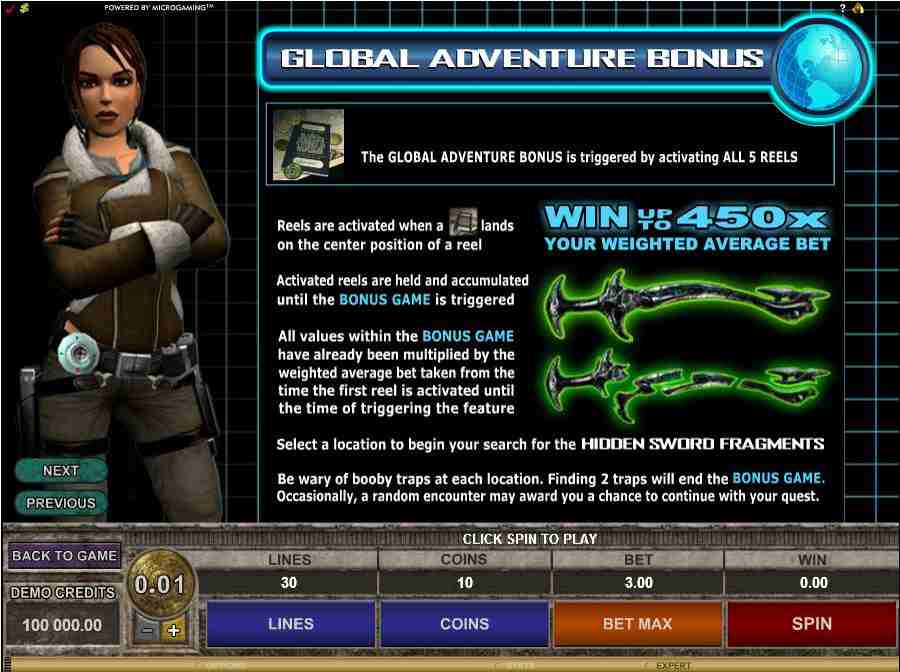 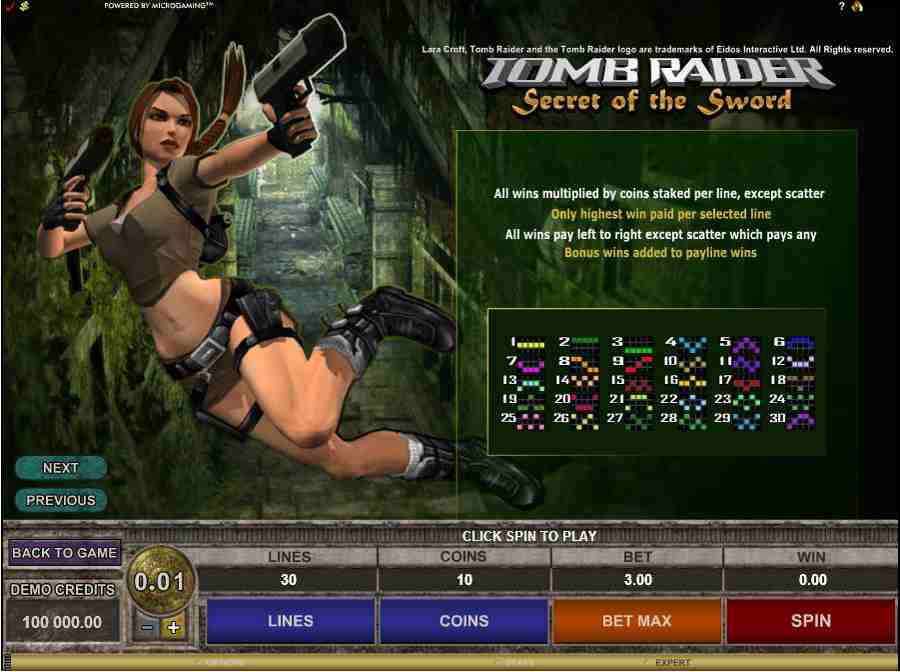 Tomb Raider – Secret of the Sword is a non-progressive 5 reel 30 pay-line video slot machine game from microgaming, it has a Lara Croft theme, and comes with a wild symbol, scatter symbol, Multiplier, free spins and has a maximum jackpot win of $120,000