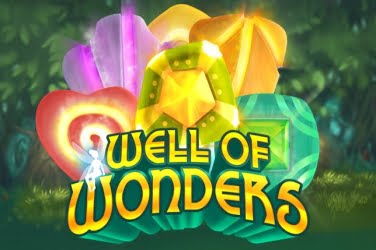 There is a charming feel to this latest release from Thunderkick online casinos as players are taken into a nearby enchanted woodland to uncover a Magical themed slots for them to enjoy. The textured graphics that have been used show a stunning scene of gnarled tree trunks surrounds by pretty flowers and lush green grass.

A backdrop that isn’t lost as rather than framed reels the symbols simply float upon the screen above a stone Well. At the base of this are carved Multiplier amounts which players can progress through with each consecutive winning combination that they create throughout the game.

Enchanting music can be heard in the background during play which adds to the soothing atmosphere that the designers have created. And players are already accessing the Well of Wonders slots game via their Desktop, Tablet and Mobile devices in the hope of discovering some treasures from its depths.

7 Gems are the only main symbols of this slots game, looking striking upon screens of any size. They are of different colors including Blue, Red, Orange, Green, Purple and Yellow and will float in the air giving players the chance to create winning combinations for them to add to their winnings.

Wild – this symbol is a grey Stone with a lit “W” upon it and is able to appear on any of the games 5 reels. When this happens players will see it randomly change any other symbol if there is the chance of generating a win to be included in the final jackpot balance.

Magical Fairy – if the player spins and there is no winning combination located a glowing Fairy may flutter onto the reels. She will fly around the various symbols before waving her wand to make all those that don’t match any other disappear from the screen. This then leaves empty positions which are then filled with more Gems and a 1x Re-Spin is given. At this point in the game if another win lands on the screen the Multiplier will also move on to the next position so that a higher reward can be received.

There is an unusual format to this online slots game from Thunderkick as there are no structured reels or pay lines as such. Instead players are asked to place between 0.10 and 100.00 before they can press the Play button and allow the game to begin. Now all they need are at least 3x matching Gems to receive a cash pay-out. To then see those symbols fall back into the Well and be replaced with others for another opportunity for a win to be found.

With each win players will also see a Multiplier being added to their pay-out amount which begins at 1x. However this is doubled each time another pay line is created and can rise to a stunning 32x if the player is lucky enough.

Sadly this is High variance and the winnings in the base game are rather low compared to other online slots that are available. And the fact that there is no Progressive Jackpot, Mini-Games or Gamble Features may deter those who prefer more of a thrill during play. However there is a Wild symbol that provides more chances of generating a winning combination and a RTP of 96.10% to entice players to this slots game.

For players who have other things to do but still want to take their chances with this slots game they can use the Auto Play Feature at any point during the game. Now the reels can be left to spin automatically to the player’s individual settings which can be either for a certain amount of times or until the wager is reached. This then leaves them in complete control until they return to reveal their final jackpot balance.

March 2017 saw this Magical slots hit Thunderkick online casinos and it is an ideal option for beginners. However it is slow paced with rather a dull format so regulars and those who want to see more action on the screen during play may be left disappointed.

Even so the Well of Wonders slots game is still a mesmerizing addition to Thunderkicks casinos. Surely to prove appealing to those who just want to relax into the soothing Magical atmosphere while winning combinations continue to soar onto the screen.

– Give Well of Wonders a free spin here or visit Thunderkick Casinos and play for real money. 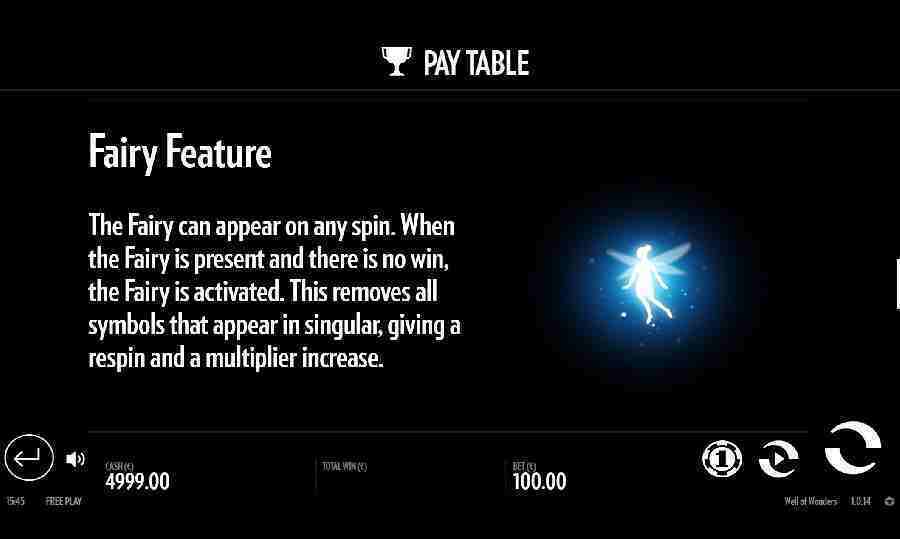 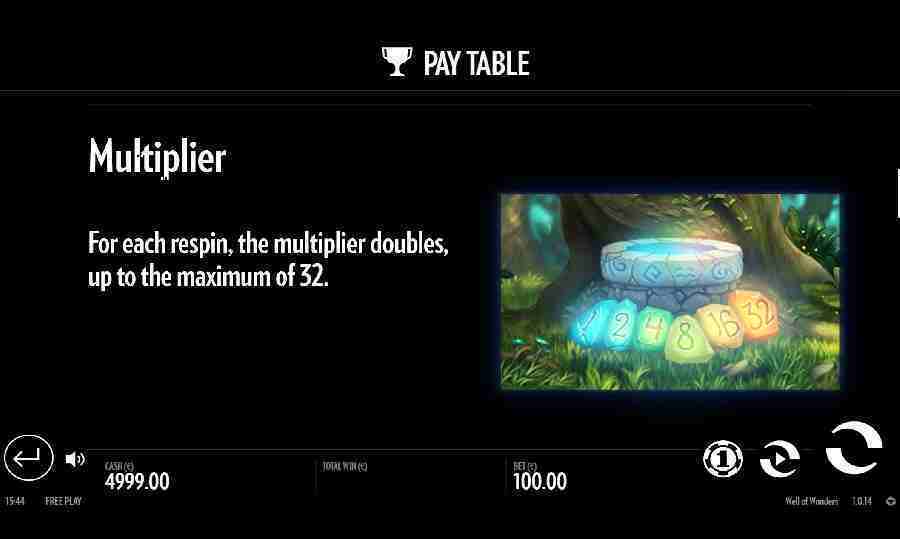 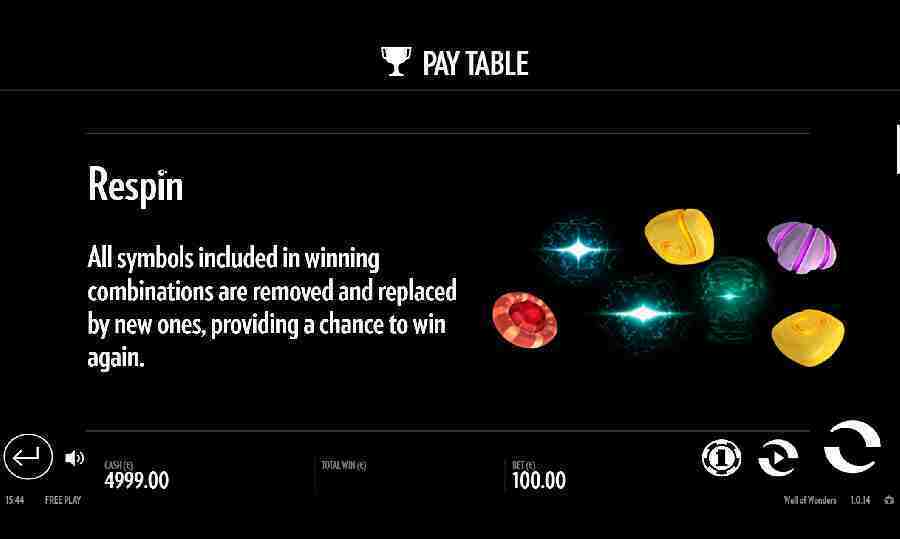 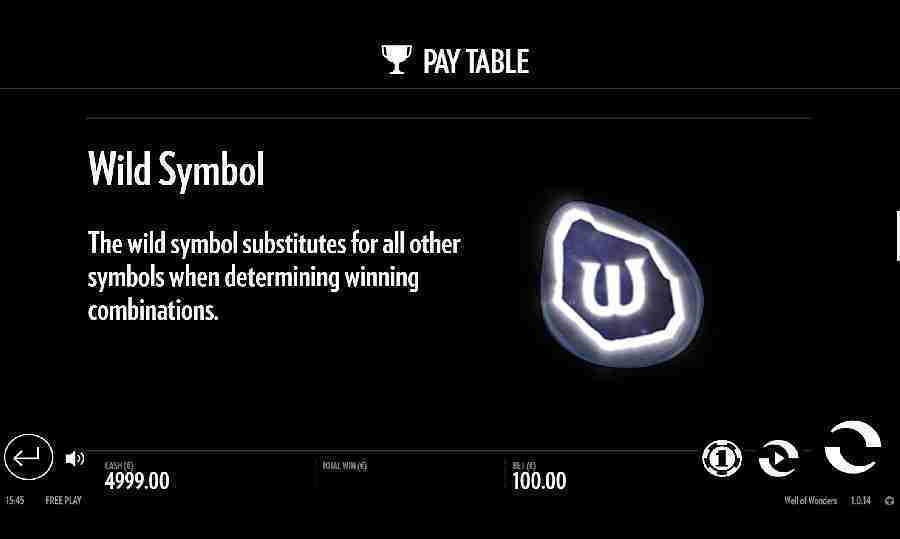 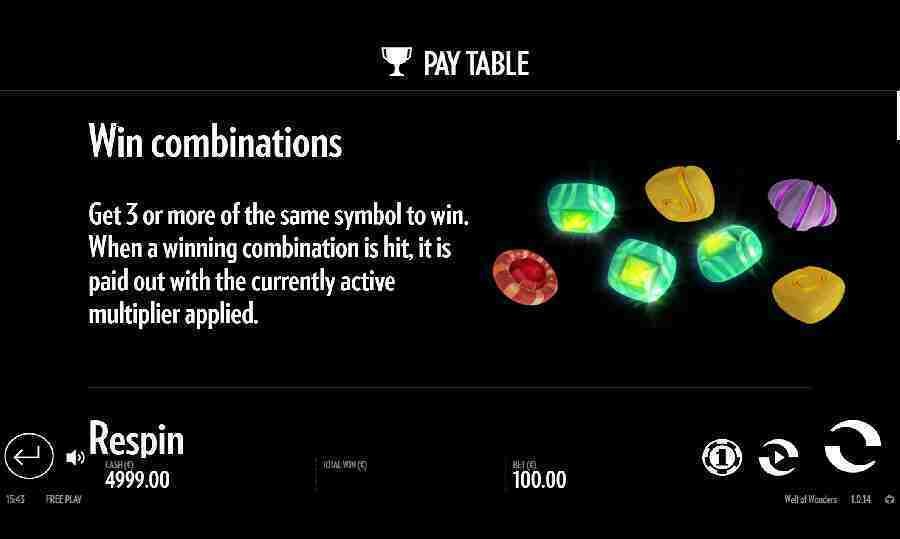 Well of Wonders is aoccurrence win combinations slot game from Thunderkick software platform. It has a Magical theme, It features re spins, multipliers, wild and a fairy and has a maximum jackpot win of 2280x you bet