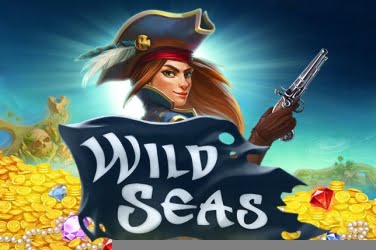 Wild Seas slots has a Pirate theme and takes players on the adventures of Anne Bonny, a dark-haired beauty who is Captain of the Pirate Ship. The 5 transparent reels making the player feel as if they are looking down on the scenic view below. An image of coastal lands with bays and ports on either side of the screen. Along with the clear topical blue waters along with a calming soundtrack to add to the serene feel of the game.

Players can use a Desktop, Tablet or Mobile if they want to set sail and follow Anne to try and steal the treasures that are given when any of the 178 winning combinations are found.

And as well as this there are various Bonus Features which provide some interesting opportunities for players to receive a decent return on the amount they have wagered.

Elk Studios have given players Wilds, Sticky Wilds, a Scatter and a Free Spins Bonus Round, all reasons why this is already proving popular despite only being released in January 2018.

All the symbols are based on the theme of this online slots and the highest paying of these if Anne Bonny herself. She stands proudly holding a pistol while her character roams the seas searching for loot.

Then there are 3x Captain symbols who become Bonny’s opponents throughout the game. The English wears a Red hat, the Portuguese is in Green and the French Captain can be found in Blue.

Each of these Captains has their own Flotilla which are shown as a Bronze Octopus, a Silver Star and a Gold Skull symbol. These appear often but only reward players with the lowest pay outs of the game.

Wild – the Wild Sea’s Flag is used as the Wild symbol and will substitute any other symbol during this slots game. However it is also instrumental in steering players toward the main Bonus Feature that players can enjoy.

Sailing Wilds Free Spins – for this round to be activated 2x Wild symbols must land on the 2nd and 4th reels after a single spin. Now they are taken to a new screen and the Level 1 Break the Convoy Mini-Game will begin.

As players take advantage of 8x Free Spins they will notice that the 5th reel has been filled with a fleet of Merchant Ships that have been sent by one of the Captains who was selected at random. All the symbols act as a Wild and will move 1x position to the left after each spin.

However now it is the turn of the Pirate Ship symbols to fill the 5th reel, beginning to fire their cannons in the hope of stopping the escaping ships. Each time a Merchant Ship is damaged it is held back until the next spin. And if the player is lucky enough to hit them 3x the symbol will sink from sight and is replaced with a Treasure Chest. This new icon then becomes “sticky” until the end of the Bonus Round.

To be able to move on to the Level 2 Loot the Treasures Feature players must have sunk at least 1x Treasure Chest symbol on the screen. The more that are visible at this point in the game will result in more returns for the player to claim. They are now joined by Bomb Barrel symbols that appear on the 1st reel.

So while the Pirate Ship continues to fire if they hit the Treasures Chest’s players will be rewarded with the prizes it holds. But sadly should a Bomb Barrel explode then they will be returned to the base game with nothing.

The coin denomination used in the game has a wide range so players can place as little as 0.20 or as much as 100.00 with each spin of the 5 reels. Now they can sit back and watch in Auto Play or be more interactive with this fun packed offering from Elk Studios.

Providing a Medium Variance slots players can expect a RTP of 96.30% which players of any level will find appealing. The games format is compelling and rather unique compared to other slots actually telling a story of Piracy as would have been experienced in years gone by. But players can stay on land and simply enjoy the entertaining 3D animations while they gather their winnings in the Wild Seas slots game. 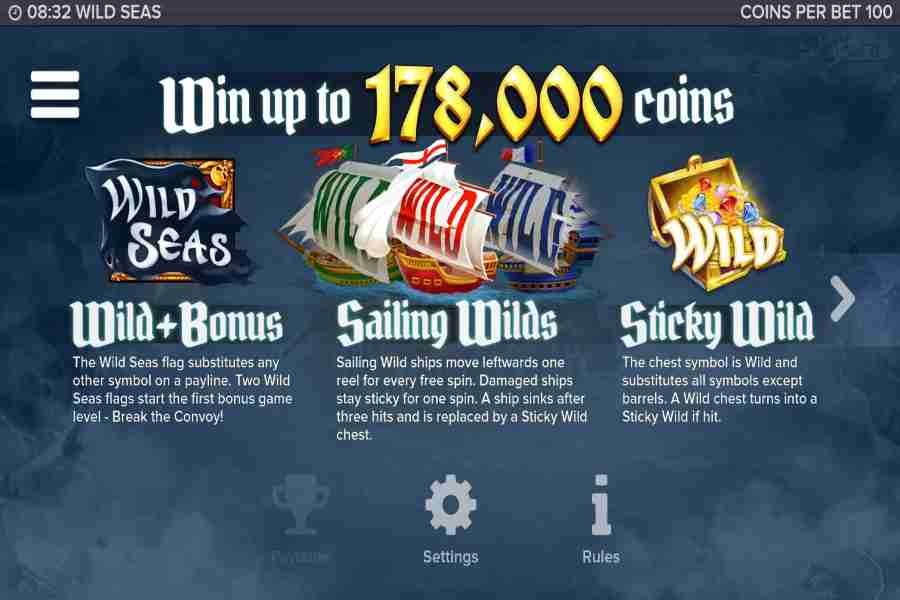 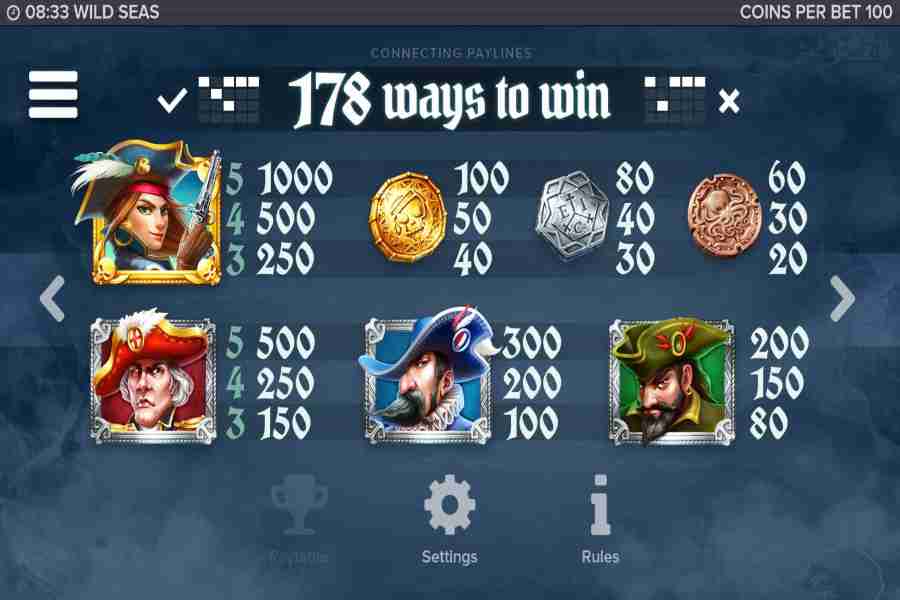 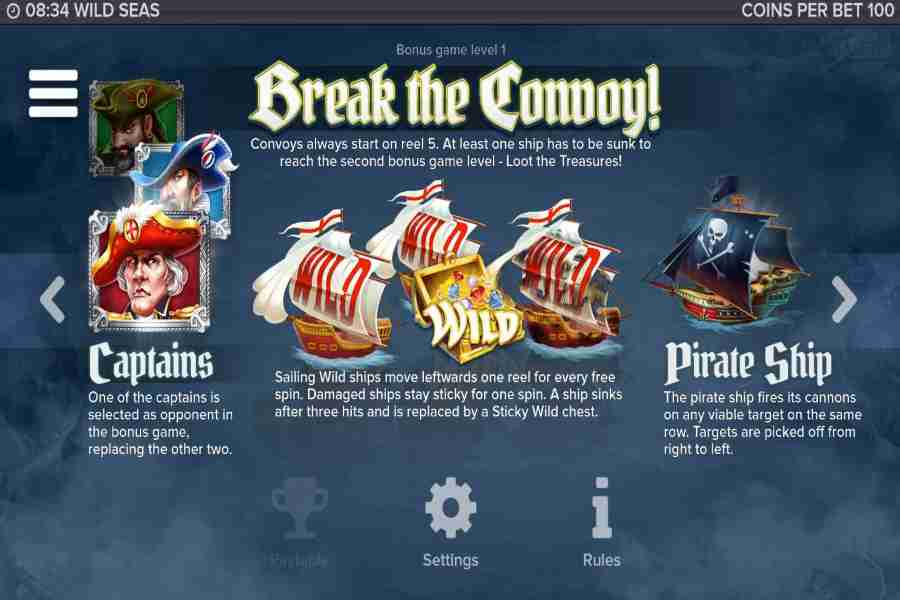 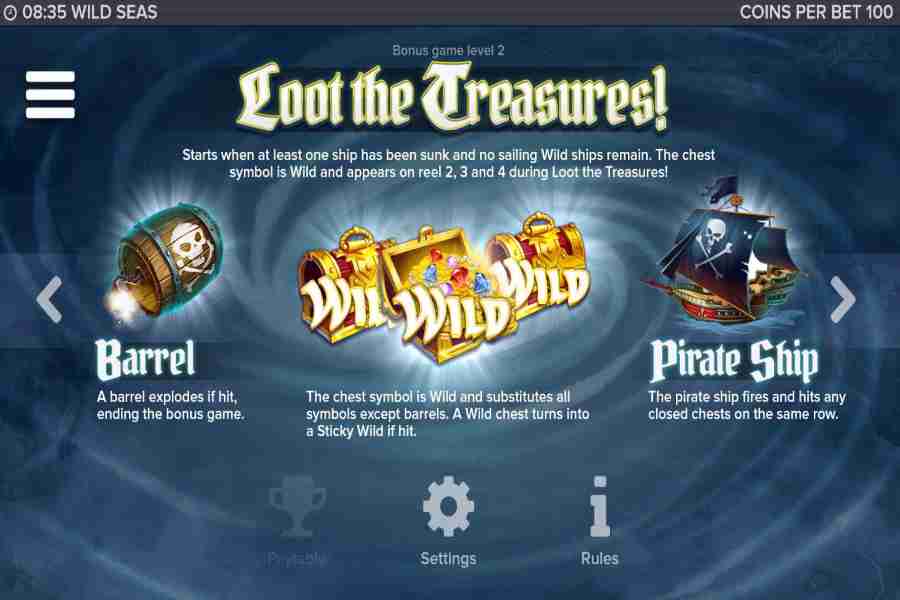 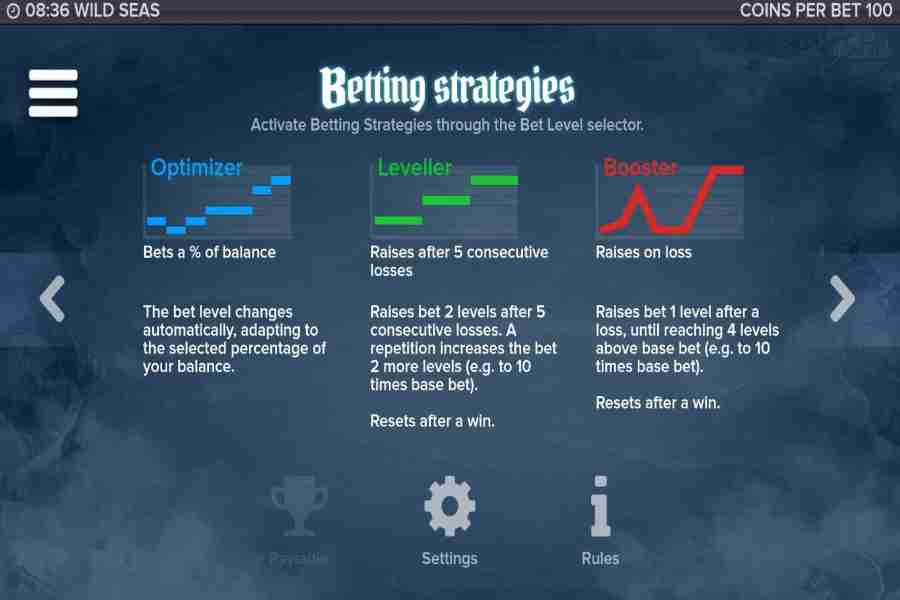 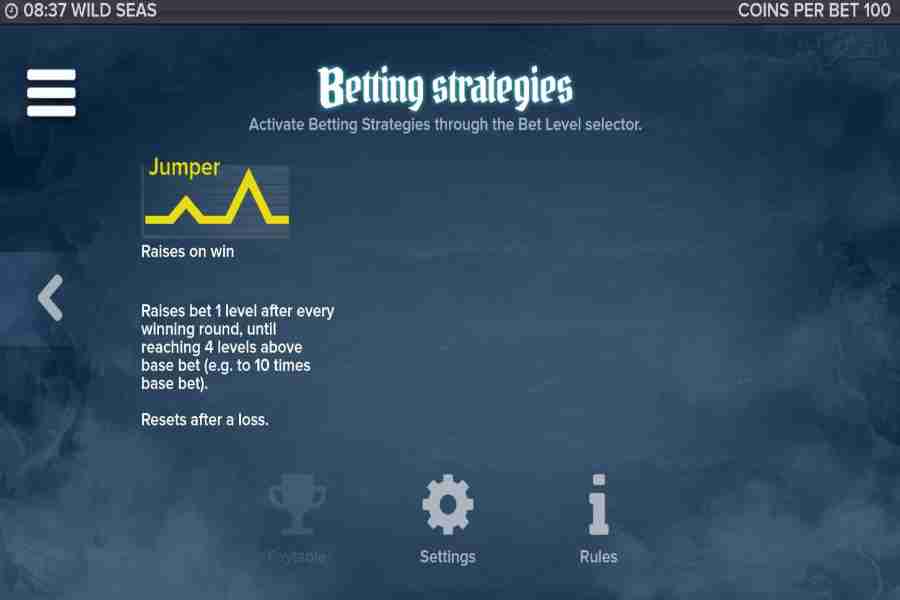