The Basics Rules Of Playing Baccarat 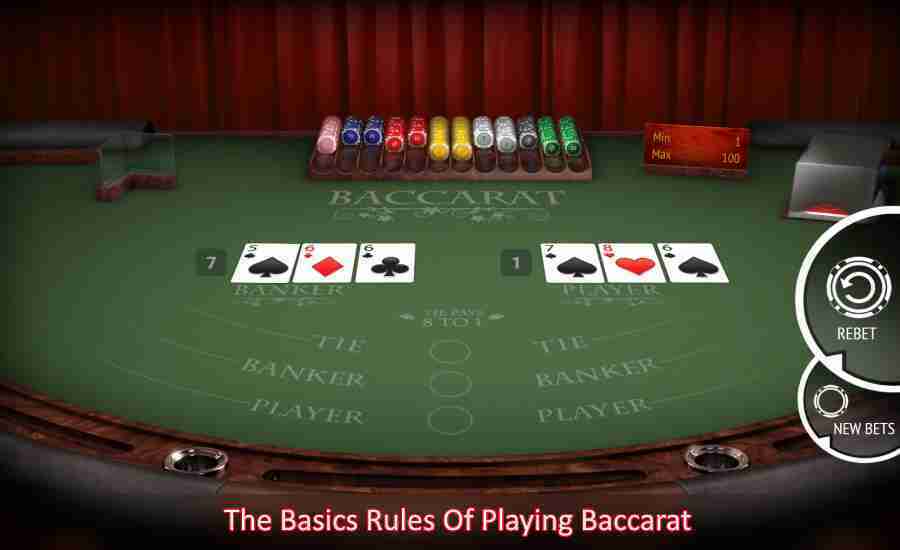 Baccarat is a derivation of the European games of Punto Banco and Chemin De Fer and can be considered as a game of mystery to many players. Although it is a staple the games titles offered by American casinos, it has not been easy for many to unravel its secrets in order to learn how to become winning players. But a little history first; the word Baccarat is the French version of the Italian word, “Baccara”, which translates to zero. This definition signifies the point values of the face cards used.

Baccarat can be traced back to 1490 when “Baccara” was first introduced in France and quickly became a favorite pass time for the nobles of King Charles VIII’s court. Even though both Baccarat and Chemin De Fer were already flourishing in the Orient, Baccarat was formally introduced to America in 1959 in Las Vegas, roughly a year and half after the introduction of Chemin De Fer. Both offerings as played in the US were and are very similar in play. The only difference then was the fact that players wagered amongst themselves [as opposed to betting against the casino] while the house took a commission from the player who held the bank. Chemin De Fer, which was offered for a brief time in the 1950’s in Las Vegas, was swiftly replaced by Baccarat. The game is still quite popular in European casinos today.

The Basics Rules Of Baccarat

Baccarat is a card game dealt from a shoe which holds 6 or 8 decks of cards, with two hands being dealt by the house, the “banker” as well as the “player”. Before dealing the hands, players may place wagers on the banker, or the player, or a tie. Usually offered in a separate casino area, the game is played on a craps-sized table with three casino dealers plus 12 players or with the full-size 14-player setup.

Only two basic bets are made here; player or banker – Punto or Banco -in addition to the Standoff bet, which is used rarely anyway. While some casinos allow players to deal the cards in turns, other casinos have an in-house dealer, the “Callman”, who deals the cards. When it comes to online Baccarat, the “Callman” is an automated virtual dealer.

As a player, even if you are the player dealing the cards, you are allowed to place a wager on either the player [Punto] or the bank [Banco]. However, it is more the custom that as the dealer, you place your wager on the bank [Banco]. You may also choose not to deal and pass on the ‘Shoe’ to the player who is next in play. This shoe will remain with one player so long as the Bank keeps winning but should a player [Punto] win, the shoe is passed to the next player. Of the two hands dealt, you can then either bet which one stands to win, or you can bet that both hands will tie.

Typically, it’s akin to when you wager on Red or Black at roulette, and the payout will be even money at a ratio of 1:1. [Of course, with the exception of the standoff bet that pays odds of 8 to 1 or 9 to 1]. The singular difference you’ll find between the Punto and Banco bet is the in-built advantage where a win on Banco costs you a 5% commission or tax which is levied by the casino. This is because it’s an established fact that in an average play of over an 8-deck cards, the Banco always wins three to four hands higher than the Punto.

Every hand dealt packs a minimum of two cards with the maximum number being three cards. When dealing cards, the “Callman” places two cards face-down and tucked under the shoe, then deal another two cards, face down, for the player with the biggest bet on Punto. Here, the Punto player looks at the cards dealt then return them to the player-dealer, after which the player-dealer turns over those same cards of both hands. It’s at this point that the casino “Callman” will call out the results as well as the winner.

Let’s take it further; should either hand tally up to a total of 8 or 9 [nine being the highest total], that is known as a ‘Natural’ and so, no more cards will be dealt. However, if it is not a ‘Natural’, then the “Callman” can instruct the player-dealer to deal a third card depending on the value of each hand dealt. The decision on when a third card can be dealt follows a precise set of rules that are applicable at all casinos. Upon completion of the dealing, the hand that has the highest count has won.

The value of a hand is based on the added values of its individual cards. The value of all the other cards in the deck is determined by the number of “pips” on the card face, tens and face cards have a value of zero, while the aces are worth one point. As such, all Baccarat hands pack values that range from 0 to 9 since only the last digit of the total is used. For instance, a 6 and a 9 whose total is 15 add up to a five-point hand. And that’s how the hand with the highest value wins. But if the hands happen to have the same value, the end result becomes a tie. Since the player dealing the cards is playing against the casino just like every other player present, he is not allowed to give payouts. Rather, the Callman [casino dealer] collects the losing bets first and then pays the ones which have won.

The Rules Of The Game

Baccarat is not that complex a game even though but it does come with certain idiosyncrasies, such as Banco [Banker hand] and Punto [Player hand], which can take some time to get used to. The key things to remember when playing are;

The object of Baccarat is to wager on the two- or three-card hand which you think will tally the highest total value of 9. When playing, you can bet on either Punto or Banco, or you may place a Standoff bet. The “Callman” will deal two cards regardless of how many players are at the table; the player hand and the banker hand, with the player hand being completed first.

Either the player [Punto] or the bank [Banco] or even both, may be dealt a 3rd card based on the three-card rules below. It is not necessary for you to learn these rules in order to play since they’re compulsory decisions. As such, they are therefore automatic and only on rare occasions will a mistake be made:

Rules For A Player’s 3rd Card

Rules For The Bank’s 3rd Card

The game of Baccarat packs a variety of odds which are dependent on how many decks will be used to deal cards. Those odds are as below:

For a single deck shoe: