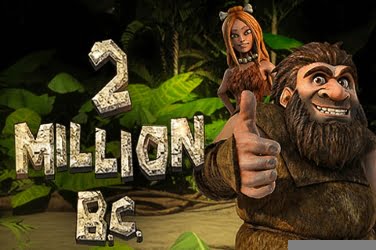 2 Million B.C slots have been released by Betsoft to be included with their other offerings to players of online casinos. It has a Caveman theme, allowing gamers to experience life in the Stone Age while they spin the reels to locate the 30 winning paylines which are available.

Players can find the 5 reels of the 2 Million B.C slots game set within a timber frame. In the background is a jungle, with a bright blue sky above. The main Caveman character can be found to the right of the reels and he becomes animated during gameplay, even giving a bored yawn if the too long is taken to make a decision.

The sandy clearing at the forefront of the 2 Million B.C slots game is scattered with Stone Tablets which give players directions throughout. There is also a burning Bonfire to the right to keep the Caveman warm.

Symbols used in the 2 Million B.C slots game are all in keeping with the theme. These include a Club, a Stone Monument, a Stone Necklace, an Urn, and a Stone Wheel. There is also a drawing of a Mammoth, a Sabre-Toothed Tiger, a Yellow Flying Creature, and a Red Gem.

There are additional symbols included in the 2 Millionaire B.C slots game which award players with Bonus Features. One of these is the Cavewoman icon, an Acorn, a Diamond and a Bonfire which acts as the games Scatter.

There is no Wild symbol to be found upon the 5 reels of the 2 Million B.C slots game. However, there are other chances for players to add to their winnings with the additional Bonus Features.

A Bonfire is used as the Scatter symbol in this online casino game from Betsoft. When 3 or more are located on the reels a Free Spin Bonus Round is activated. This round can also be re-triggered at any time throughout the game to increase a players winnings even further.

Should the player reveal an Acorn symbol upon the 5th reel of the 2 Million B.C slots game a bird will fly across the screen to collect it. However, once 3 have been found a Bonus Game becomes available to the player.

At this point in 2 Million B.C slots, players can take advantage of the Saber Tiger Attacks game. They are then to aim an Acorn to hit and stun the Sabre-Toothed Tiger as it crosses the screen. If successful they will receive an additional bonus prize.

Another Bonus Feature of the 2 Million B.C slots game is found with the Diamond symbol. If 3 or more are located within a winning pay line the Cavewoman will race onto the screen declaring that her Diamond has been stolen.

It is now up to the player to send the Caveman to retrieve it for her by choosing from 3 options. Either to attack the Sabre-Toothed Tiger, sneak up on it, or amuse the animal to reclaim the Diamond. If they choose the right option, an additional prize is given to the player.

The highest jackpot amount in the 2 Million B.C slots game comes via the Cavewoman symbol. The icon needs to appear across all 5 reels of the game, and if the highest wagered amount is placed this can total up to 2500 coins which are added to the final payout figure.

2 Million B.C slots can prove appealing to both high and low rollers of online casino games. It uses coin sizes from $0.02 to $1.00, with a maximum of 5 coins placed upon any of the 30 winning paylines. This means that players can wager up to $150 on each spin.

As the game of 2 Million B.C slots has additional Bonus Features on offer, even the lack of a Wild symbol doesn’t deter players from the game. They are able to take advantage of Free Spins, and two alternative Bonus Rounds. This means that there are plenty of opportunities for players to add to their final winning amount.

The 3D animated graphics, pleasant background music and sound effects all add to the atmosphere of the 2 Million B.C slots game. Making it appealing to players of all levels from around the globe. 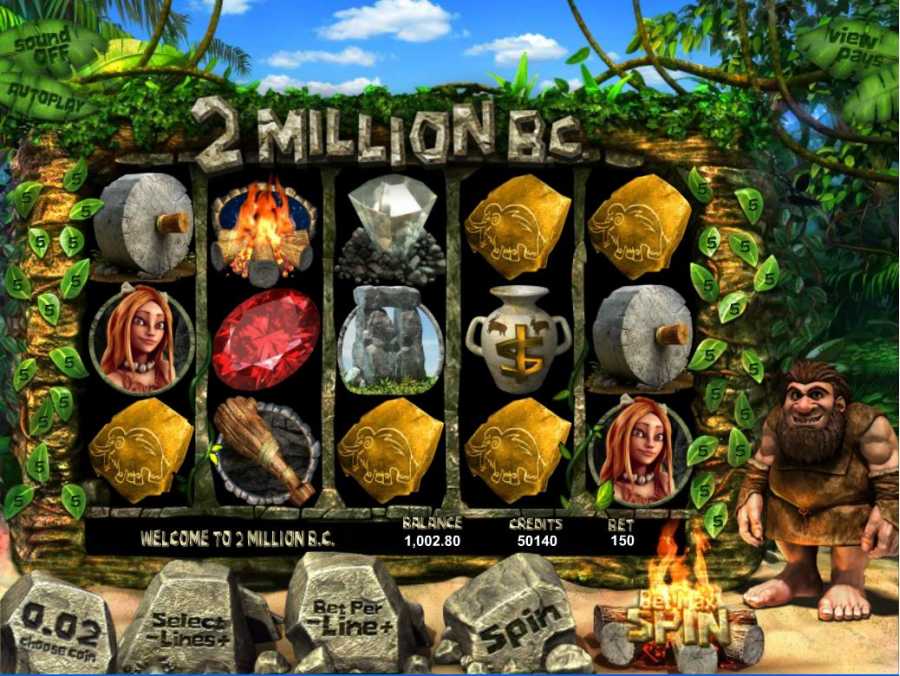 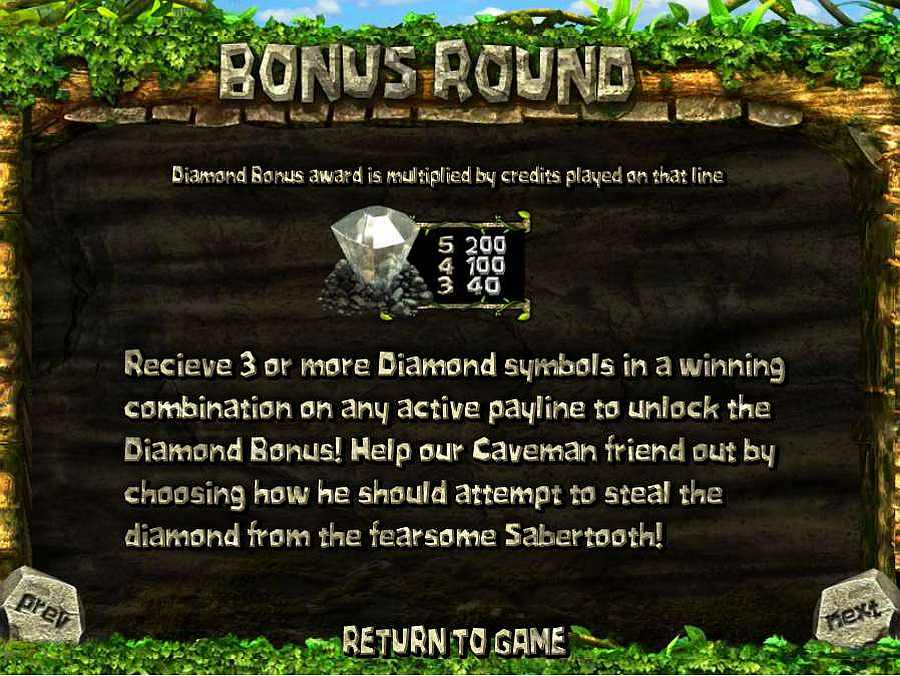 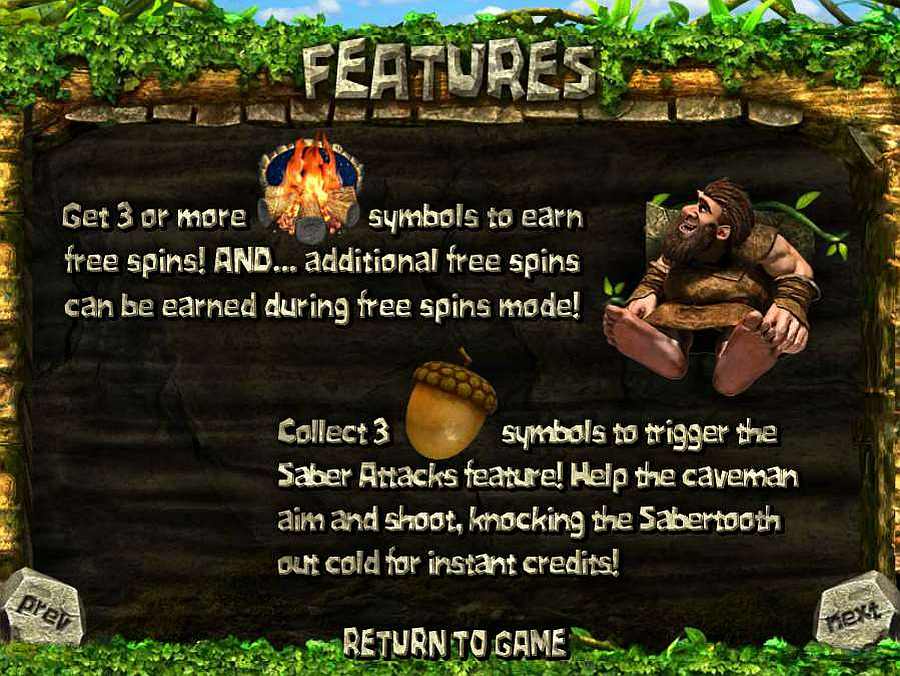 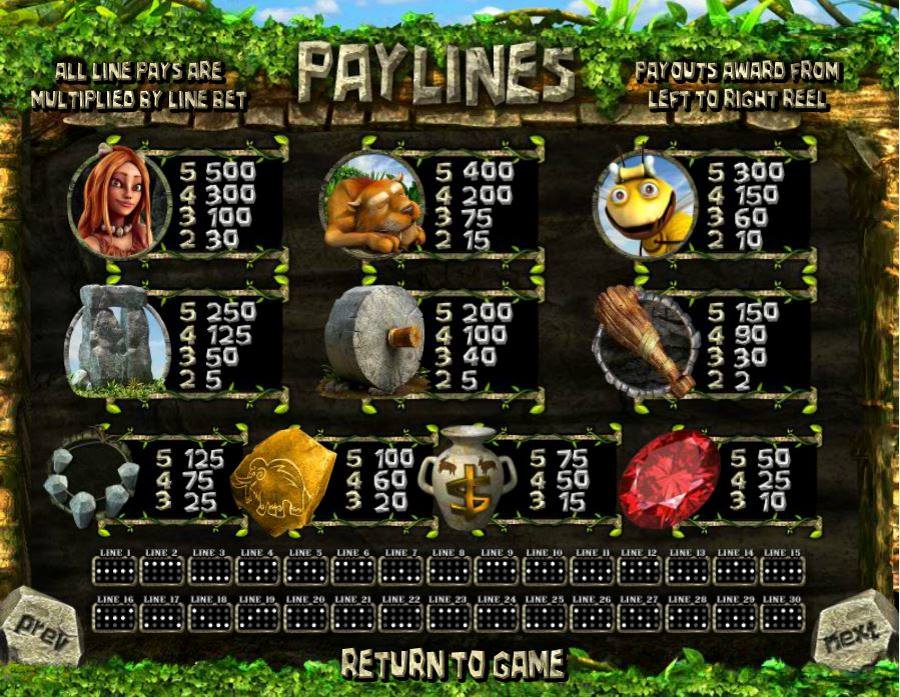 2 Million B.C is a non-progressive 5 reel 30 payline 3D Video Slot machine game from Betsoft, it has a caveman theme, and comes with free spins and maximum jackpot win of $7,500.