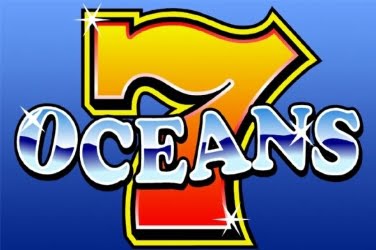 This slots game can be found in the many Microgaming online casinos and is enjoyed by players from around the globe. The 7 Oceans slots game has just 3 reels and 1 winning pay line. So it may appear quite basic to regulars of online slots games. However, there are many things to enjoy during gameplay.

The 7 Oceans slots game has an Under Water theme, with gentle tunes playing in the background. It has been designed by Microgaming with a deep sea image as the background. Players can view the deep blue seas, along with various tropical fish, a starfish, and a treasure chest.

As the name suggests it is the 7 symbols that players need to spin in the 7 Oceans slots game. There are Blue 7’s which are found upon the games 3 reels. Yet it is the Orange 7’s that pay out the highest jackpot amount.

Other symbols that are can be used to create a winning combination also include single, double, and triple Bars. These may pay out a lower amount, but all can help to increase the final figure that is awarded.

The coin sizes used in the 7 Ocean’s slots game range from $0.25 to $5.00. There is a maximum of 3 coins which can be wagered to activate the winning pay line. The more coins that are placed, the higher the pay-out.

Microgaming has designed the 7 Ocean’s slots game with no Bonus Features. The main feature is the Sparkling Logo symbol which can pay out a top jackpot of 4000 coins. Other jackpot amounts include 1000, and 500 coins accordingly.

How much a player can be awarded depends on the amount that was originally wagered before the reels of the game were spun. Although there is only 1 winning pay line, there are numerous combinations to take advantage of during gameplay.

The 7 Ocean’s slots game doesn’t boast Wilds, Scatters, Free Spins, or Bonus Gamble Rounds. So it is a basic game that proves appealing to beginners to online casinos.

There is also no progressive jackpot to be won, so any amounts to be awarded are only available during the base game of 7 Ocean’s slots.

Before spinning the 3 reels of the 7 Ocean’s slots game the player must decide how much to wager on the winning pay line. All the various combinations and how much they are worth is clearly shown on the main screen of the game.

Players need to look for the 7’s in this classic Under Water themed game by Microgaming. There are both Blue and Orange 7’s upon the game’s reels. They provide pay-out amounts of 500, 1000, and 4000 coins respectively.

Coin sizes are kept low, which makes the 7 Ocean’s slots game appealing to low rollers and beginners. There is also no Bonus Features or a progressive jackpot to have to concentrate on during gameplay. These factors, however, may not make it a popular game with some players who prefer to take a bigger gamble.

People from around the globe are enjoying the Under Water graphics that are shown throughout the game. Along with the soothing music in the background it is simple game to play that can generate a modest pay-out amount for players. 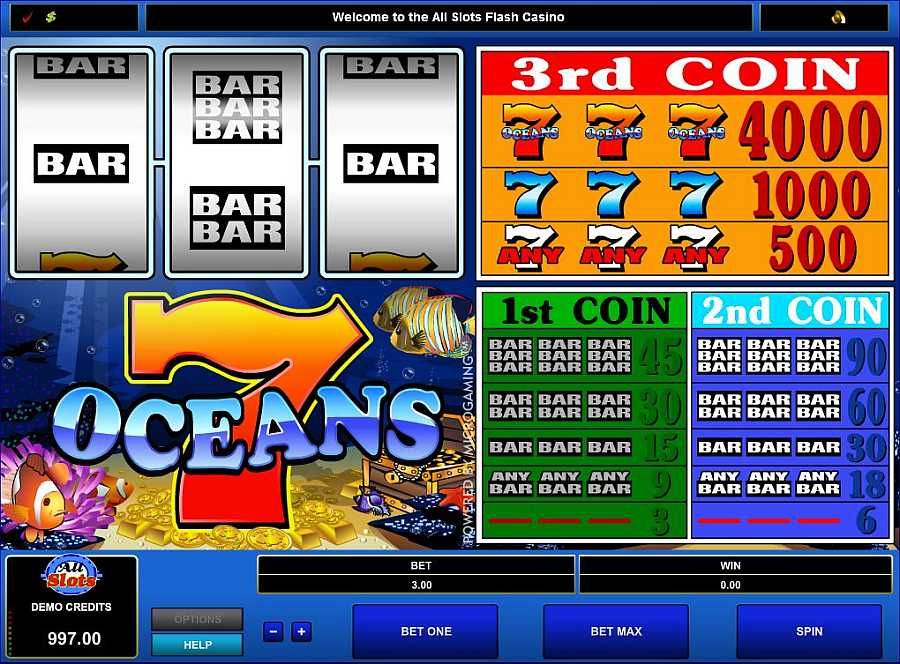 7 Oceans is a non-progressive 3 reel 1 pay-line slot machine from Microgaming, it has an underwater theme, and has a maximum jackpot win of $20,000,00