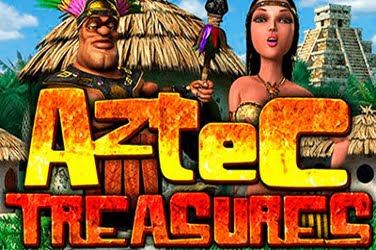 The Aztec theme has an element of romance included in its design. This is shown in one of the Bonus Rounds which are a part of the game of Aztec Treasure slots. All the graphics are of a high-quality 3D design and there are various animations which add to the atmosphere and fun of the game.

Players will find the 5 reels of the Aztec Treasure slots game encased within an ornate golden frame. There are stone columns on either side which have the flames of their lanterns flickering throughout the game.

In the background, players can see a jungle scene with a bright blue sky. Along with this, there are pleasing tunes playing throughout the game of Aztec Treasure slots to enhance the enjoyment during play.

In keeping with the Aztec theme, players will find symbols such as an Aztec Helmet, a Leopard, an Aztec Temple, and a jeweled Golden Bowl.

3 Gems are also used as symbols throughout the game of Aztec Treasures slots. There are also the main 3 characters of the game depicted upon the reels. Rook the Tribal Chief, and the 2 beautiful Native Women.

However, there are also various Bonus Symbols included in the Aztec Treasure slots game. The first is shown as a “Wild” which offers players a 2x Multiplier if they are included in a winning combination.

A 2nd Wild is the Spear symbol. When this is revealed during the game of Aztec Treasure slots Rook will appear on the screen and throw the spear. Whichever symbol are lands upon is then changed to a Wild with the chance of creating a winning payline?

It is the Gecko which is used as the Scatter symbol in the Aztec Treasure slots game. 3 or more of these will award the player with a Free Spins Bonus Round. An additional Bonus here is that should further Gecko symbols appear again 1x additional Free Spin is added to the remaining total.

There are 2 Bonus Rounds included in Aztec Treasure slots, one of which is a Secret Room “Pick ‘Em” game. This is activated when the 3 different colored Gems are aligned on the 5th reel during play. At this point in the game, the player is taken to a 2nd screen where they can choose 1 of 3 doors. Each of these has a random prize hidden behind which is then included in the final payout amount.

An additional Bonus Feature included in this Betsoft online casino game is given when 3x Aztec Calendar symbols appear across the reels. Then the player can expect to receive 20,000 coins to be added to their jackpot balance.

Before the Aztec Treasure slots game can begin the player must decide how they wish to make their initial wager. This includes how many of the 30 winning paylines they choose to bet on, and to what amount.

As the coin denominations are kept low in the game, players of all levels can enjoy Aztec Treasure slots. They range from 0.02 to just 0.50 with a maximum of 5 coins allowed on each payline. This may not prove appealing to those who prefer to place a higher wager, but there are numerous Bonus Features included in the game to provide more opportunities for players to increase their winnings.

The Aztec Treasure slots game boasts 2x Wild symbols, a Scatter, and 2x Mini-Bonus Games. All of which can help to create more winning combinations and award random cash prizes. Such Bonus Features along with Free Spins and a 2x Multiplier means that this Betsoft release is proving popular with players from around the world.

With 3D animations and quality graphics there is plenty of fun to be enjoyed in the Aztec Treasure slots game. This is why many players are taking advantage of all there is to offer in this Betsoft online casino game. 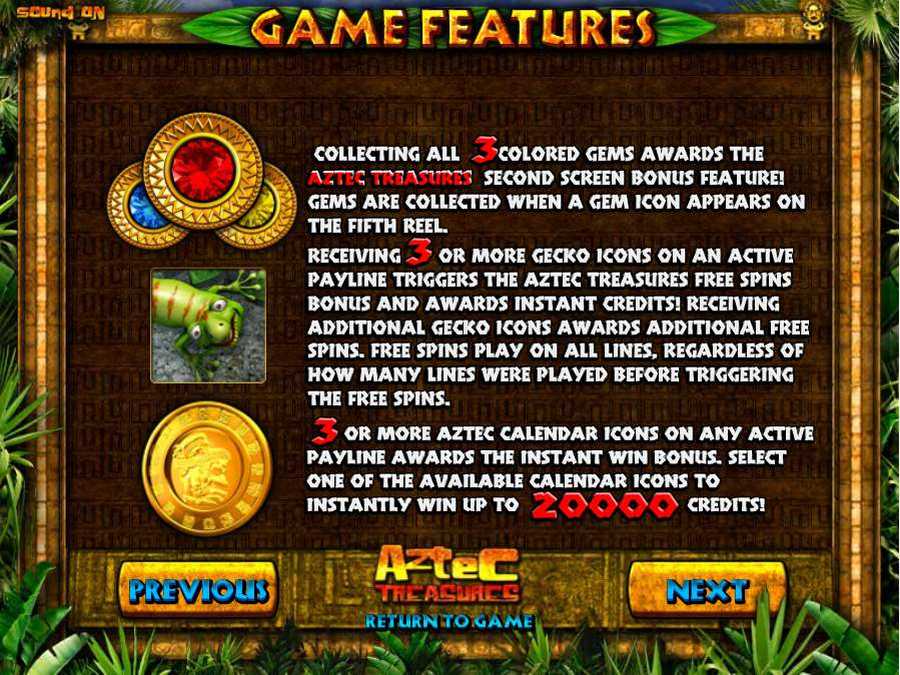 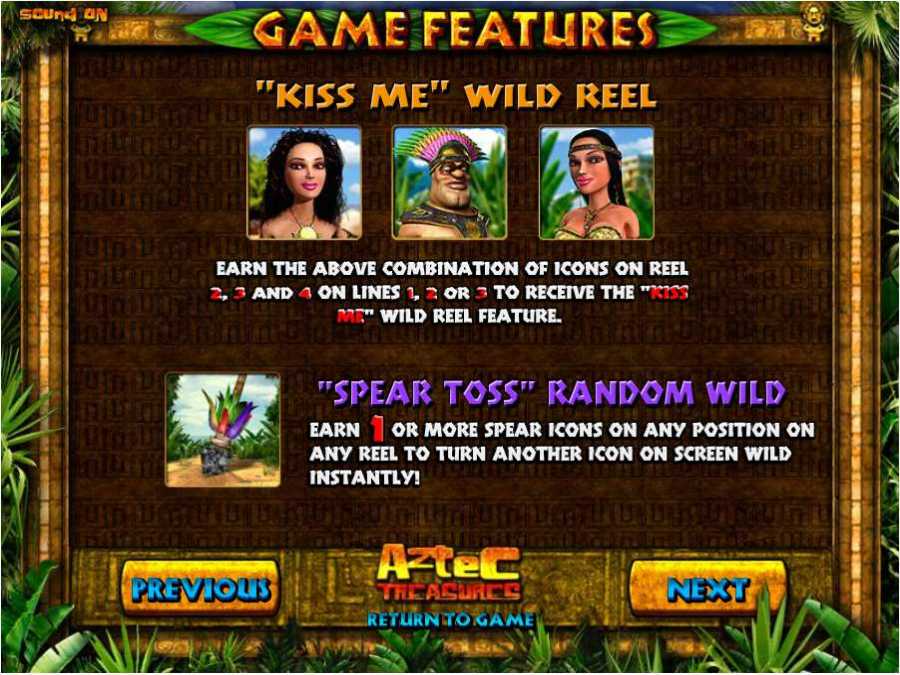 Aztec Treasure is a non-progressive 5 reel 30 payline 3D video slots machine game from betsoft, It has an Aztec theme, and comes with a wild symbol, free spins and has a maximum jackpot win of $7500