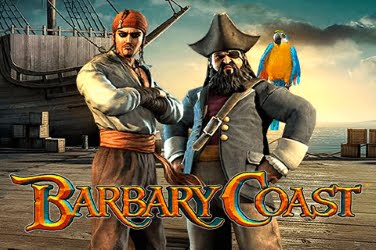 Up until the 19th Century Barbary Coast in North West Africa was known for its pirates and slave traders. Betsoft have used this fact as their inspiration in this Pirate themed online slots game.

There are 5 reels in the Barbary Coast slots game are set within the side of a Pirate ship, with lanterns lit at the top. The designers have used barrels and a cannon to create the Control Panel at the bottom of the screen.

Players can enjoy a movie style introduction to the game, with graphics of the highest quality. The entertainment continues throughout play with various characters coming alive on the screen when certain Bonus Features are activated.

Ben Sawyer is the Pirate hero in this video slots game and players can join him on his sea faring quest. Chasing down the infamous Blackbeard to save a beautiful girl that he is holding captive.

This Betsoft creation has 5 reels and 30 winning combinations and with several Bonus Features there is no wonder that it is becoming popular with players from around the globe.

All the graphics in this online slots game are of a high 3D quality and this is shown in the Pirate theme related symbols that the designers have created. Players will find a Compass, a Pistol, a Treasure Map, a pile of Gold Coins, a Treasure Chest, a Rum Barrel, and a Skull and Crossed Swords.

There is also a beautiful Girl used as a symbol in the game. The lady that the hero Pirate needs to rescue.

In addition to these there are various Bonus Symbols, one of which is the Parrot. When 3 or more of these are spun players will be awarded with a random number of Free Spins. However this particular feature cannot be triggered while the spins are in play.

There is a Cannon Wild included in this online slots game. When the Cannon symbol is located on the 3rd reel a small animation is activated. Players will see the ships Worker walk across the bottom of the screen. As he fires a cannon the whole reel becomes Wild for the following spin.

Ben Swayer himself is used as a Bonus Symbol in this Pirate themed game. Should players reveal 3 or more of this character it will activate a “Click Me” Feature. Here players can click on each symbol that they have found to collect a random cash prize.

A crew member by the name of Grog is used to activate another Bonus Feature. When 3 or more of his symbol appears then players are taken to a “Head/Tails” type game. Should the player choose correctly then Grog has to take a drink and a random credit is awarded. If Grog loses 3 times then the player will see further credits added to their pay out amount.

Players may also be able to enjoy the Fight Bonus Round during the Barbary Coast slots game. This is activated when 3 or more Blackbeard symbols are spun across the games 5 reels.

At this point in the game players are asked to select the order of 3 different sword moves. These are slash, parry and thrust, and if the player selects the best combination then they can add further to their winnings.

The fight will then play out, and for each hit credits are added to the jackpot figure. An extra prize can also be awarded at the end of this Bonus Round if the player wins and is able to rescue the Girl.

Betsoft have set the coin denomination to range between $0.02 and just $0.50. Now as this factor may make the game appealing to low rollers, as there are 30 winning combinations there is still plenty on offer for those who wish to wager a higher amount.

It is possible to place a bet on just 1 winning payline, or the full 30 which are available. So this online slots game is proving popular with players of all levels.

In addition to this there are various Bonus Features included in this 3D game. These include a Cannon Wild, Free Spins, and 3 different Mini-Games. All of these can help players to increase their final winning amount.

With its movie style graphics and animations the Barbary Coast slots game provides players with various reasons to return to Betsoft online casinos time and again. 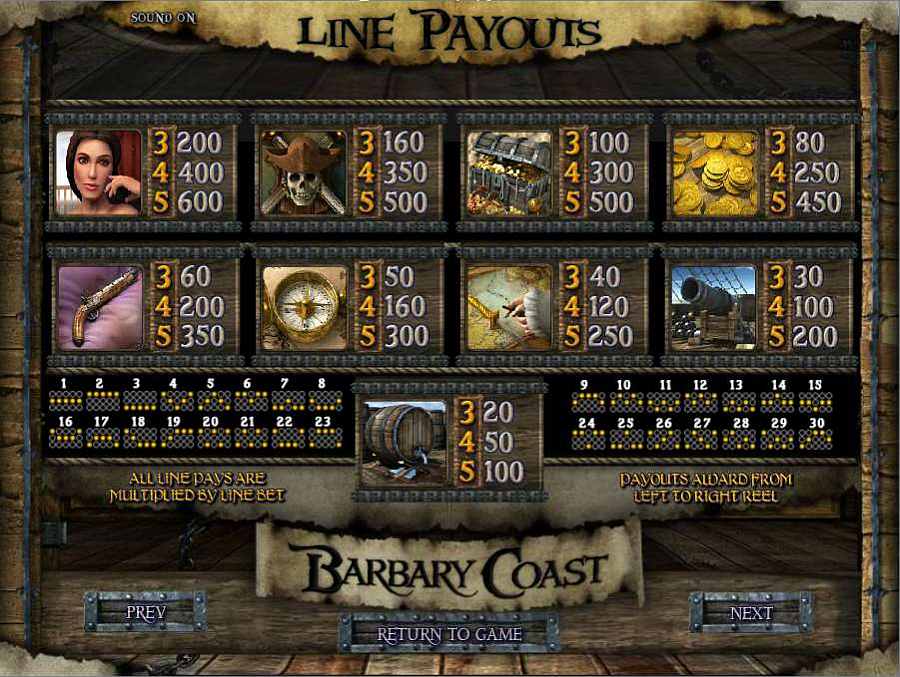 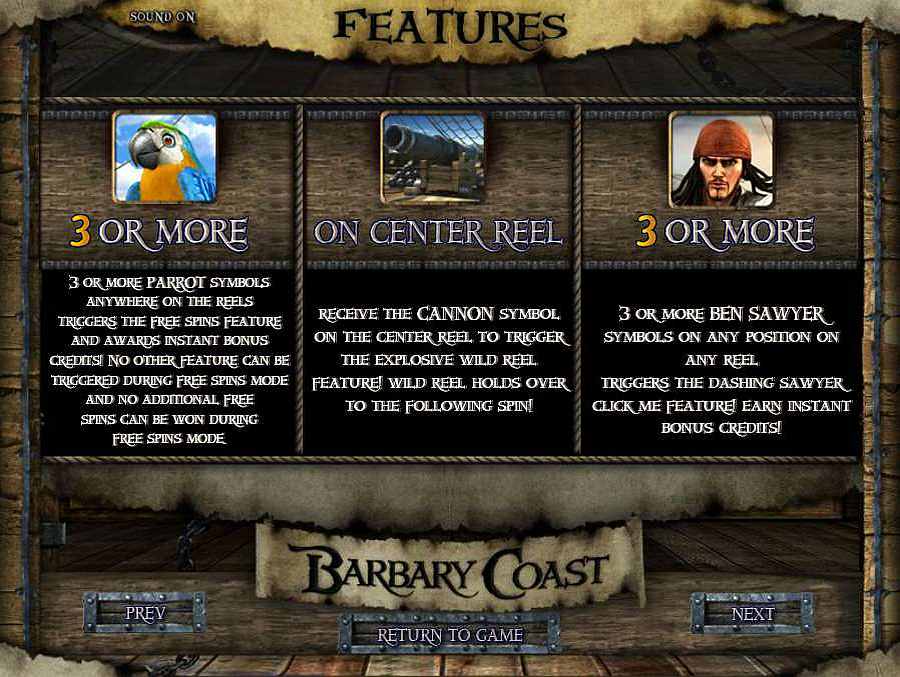 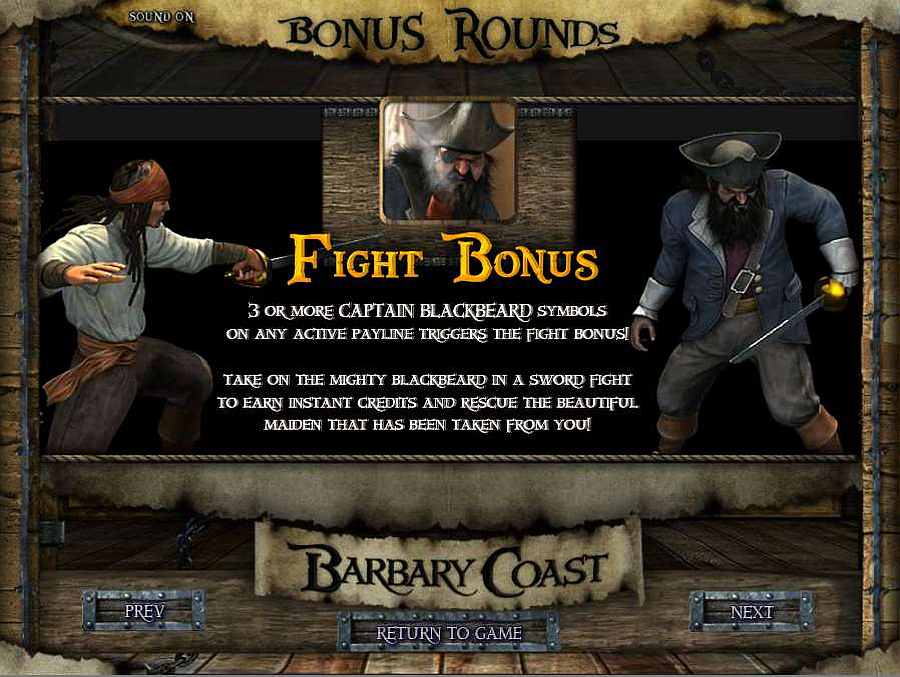 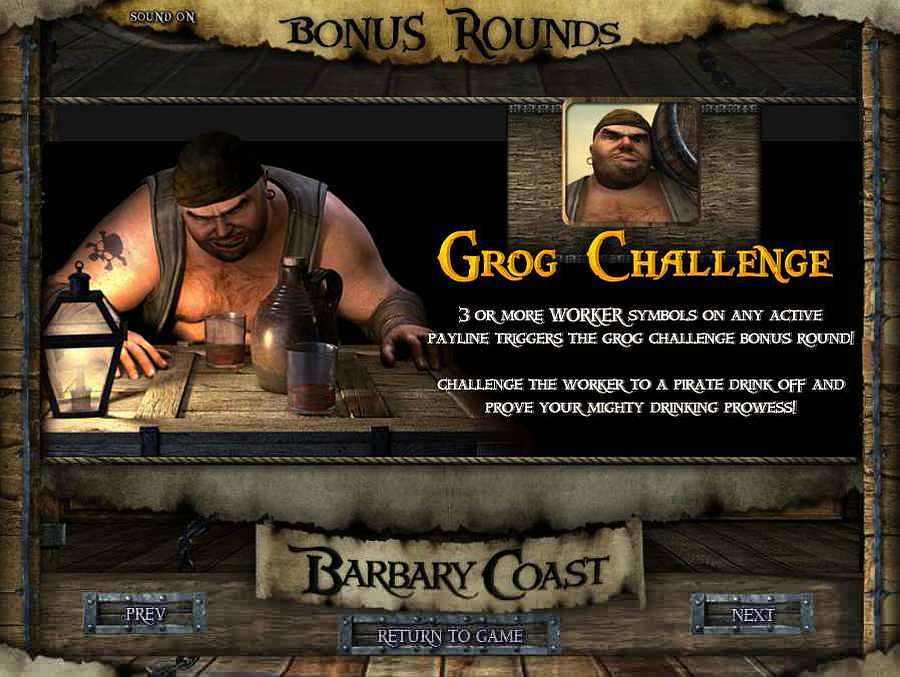 Barbary Coast is a non-progressive 5 reel 30 pay-line 3D video slot machine from BetSoft, it has a Pirates of the Caribbean theme, and comes with a wild symbol, free spins and has a maximum jackpot win of 7500 coins