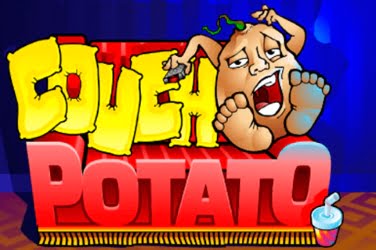 The Couch Potato slots game was released by Microgaming in September 2013 to add to their online casinos. It has a classic design with just 3 reels and 1 winning pay line. As a traditional slots game, the screen is filled with the reels so there is no background design to enjoy. However, there is a large Slouching Potato which players can see at the top of the reels, which is the only way to connect the game to its title.

However, it can be said that the Couch Potato slots game is a simple and basic online casino game. The tunes that play in the background may be dull to many, but the Microgaming designers have used bright colors in their graphics

Staying with the traditional arcade games of the past, Microgaming has used symbols in the Couch Potato slots game that depict the era. Players can find Cherries, a Single, Double and Triple Bar, and White, Blue and Yellow Sevens.

A Wild symbol is used in the game, which is the Couch Potato Logo set within a Television. This icon is stacked upon the 3 reels of this Microgaming online casino game and can be used to create more winning combinations for the player.

The Couch Potato Wild can change any of the other symbols which appear during gameplay. The pay-out received depends on how many coins have been wagered at the beginning onset of the game.

Should the player be fortunate enough to uncover 3 of the Wild symbols during one spin, then they will be awarded the highest jackpot of 15000 coins. However, there are smaller pay-out amounts of 2000 and 5000 coins if 1 or 2 are uncovered.

There is also the chance to receive 2 varying Multipliers when the Wild Logo is found upon the reels of the Couch Potato slots game. This can be either 5x or 25x the initial wagered amount should 1 or 2 of these symbols appear during any of the games spins.

Unfortunately, there are few features to complement the Couch Potato slots game. As with many of the Microgaming online casino games, players will not find a Scatter or any Bonus Games to enjoy.

There is not a Free Spin Bonus Round as some players may expect, and no Gamble Feature at the end of gameplay. This may make this particular Microgaming online casino game unpopular with players who enjoy the thrill of such additional features

( Now available on mobile version ) As the Couch Potato slots game has only 1 main feature, it is a straightforward game to play. The main thing is to decide how many coins to wager upon the 1 winning pay line. Obviously, the higher the amount placed, the higher the rewards that can be benefited from.

The coins sizes used in the Couch Potato slots game range from $0.25 to $5.00 and the maximum coins of 3 need to be placed to ensure the highest results to be added to the player’s final payout amount for each spin.

With the Couch Potato slots game, there is only a Wild symbol to add to the chances of winning. The games Logo can be found stacked upon the 3 reels of this Microgaming online casino game. When the full 3 are spun, 15000 coins are given to the player. There are also domination’s of 2000 and 5000 if 1 or 2 are used to create a winning combination during game-play.

It is possible to play the Couch Potato slots game in Expert Mode. This means that players can set the reels to spin automatically for either 5x or 10x while they are away from the screen. The game can also be set to play automatically until the maximum wagered amount is met.

Although the Couch Potato slots game may have few features and may be of a basic design, it is still proving popular with players who enjoy the traditional style and are aware that they may need patience before they see any return on their wager 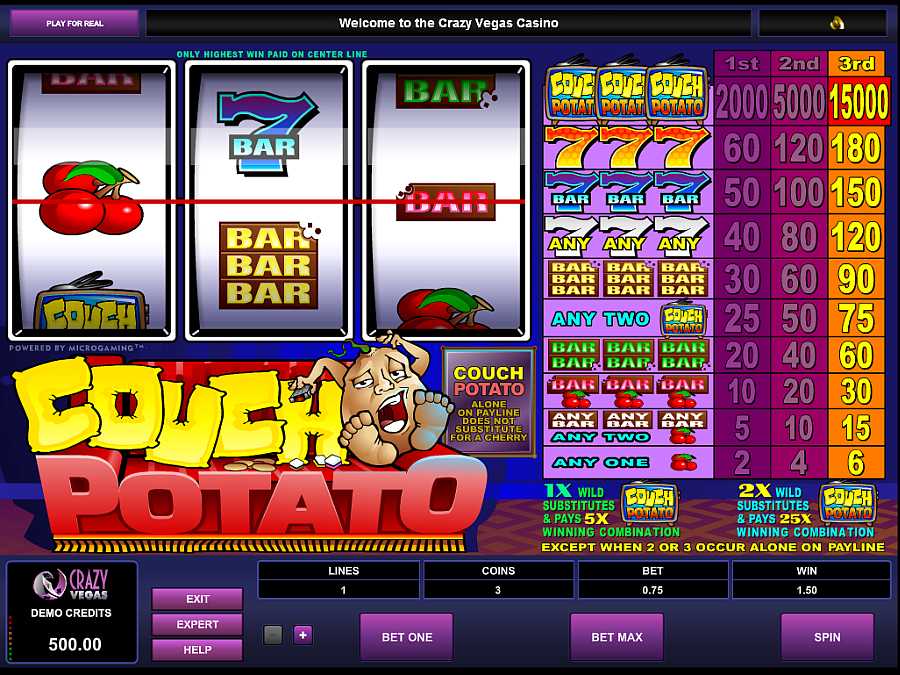 Couch Potato is a non-progressive 3 reel 1-paylines slot game from microgaming, it has a classic theme, and comes with a scatter symbol, free spins and has a maximum jackpot win of $75000