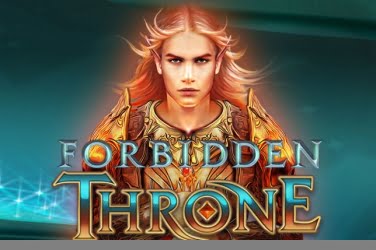 There are numerous Fantasy themed slots games available but the Microgaming designers have gone one step further with their latest release. Players may think that they are in a video game rather than an online slots as they search the land for all the treasures that are hidden there.

An ornate frame encases 5 transparent reels which shows a Mountain scene in the background. This is a tale of the freezing temperatures meeting a scorching heat in a mystical land with Unicorns and Sorcerers. And with stunning highly detailed graphics players can enjoy the thrill of the journey as they watch their jackpot balance grow.

Even though Auto Play is included in the games format and can be used at any time there is so much fun action to be enjoyed most prefer to more interactive with the software. However there is still the opportunity to set the reels to spin automatically if the player needs to be away from the screen. This means that they can hopefully return with a decent jackpot balance to claim once their maximum stake has been reached. And it doesn’t matter whether accessing the game via a Desktop, Tablet or Mobile device nothing is taking from the smoothness of play during the Forbidden Throne slots.

Different shaped gems in various hues make up the lowest paying symbols in the game. These little jewels are colored in Blue, Red, Orange, Yellow, and Green and appear often throughout the game.

Other symbols include a Golden Helmet, an Ancient Book, a Winged Headset with a Ruby inset, a Snowflake design and a Fiery depiction provide players with a higher pay out when they land on the screen.

Wild – the Forbidden Throne Logo is the main Wild symbol used in the game and can appear upon any of the 5 reels. When it lands this symbol is able to change any other besides the Scatter symbol. This can provide players with more chances to add to the final balance that they can claim.

Scatter – a Glowing Orb acts as the Scatter symbol and if the player locates 3 or more of these they will be taken to the Free Spins Bonus Round.

Free Spins – the amount of Glowing Orb Scatters that are spun will determine how many Free Spins are rewarded to the player. 3x Scatter symbols will result in 10x Free Spins which rises to 20x and 30x respectively if more are revealed.

This gives players the perfect opportunity to add to their winnings and with a Re-Trigger feature this Bonus Round could continue indefinitely if the player is lucky enough.

Wild Reels – 5 different characters are used at this point in the game. Players can find a Unicorn, a Phoenix, and the Castle which both sides are battling to overthrow. The fight takes place between Sorconass the Queen of Ice against Wulthor the Elvin Lord of Fire and their images can also be found here.

With each spin at least 1x reel will become stacked with a random Wild which can then replace any other, although not the Glowing Orb Scatter. This can mean some big wins especially if the player is wagering the maximum amount allowed. Something which is proving appealing to high rollers who want to see a high return on their initial stake.

There are 40 winning combinations in this slots format and all of these pay lines need to be in play before the game can begin. However low rollers can still take advantage of all that is offer as wagers begin at just 0.40 with each spin. But for those who have a bigger budget they can place as much as 200.00 which can result in some big wins if the Bonus Features are activated.

Although there isn’t a Progressive Jackpot or Gamble Feature included in the game high rollers can still get a thrill from this Highly volatile game. Aiming for the bigger cash prizes with the various Wilds, Scatter and Free Spins that are available during this online slots release from Microgaming.

Players may need to keep an eye on their payroll balance with this High variance game, especially as the Free Spins Bonus Round can prove to be rather elusive. But with the chance of winning 500x their initial stake it has proven popular with high rollers from around the globe since its release.

There is plenty on offer to entice players of all levels who enjoy the Fantasy theme that has been created in the Forbidden Throne slots game.

Give Forbidden Throne a free spin here or visit Microgaming Casinos to play for real money. 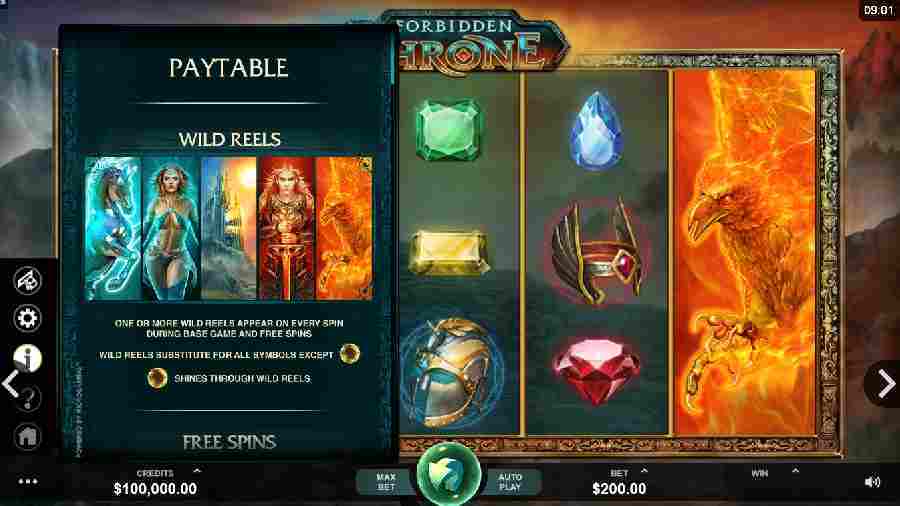 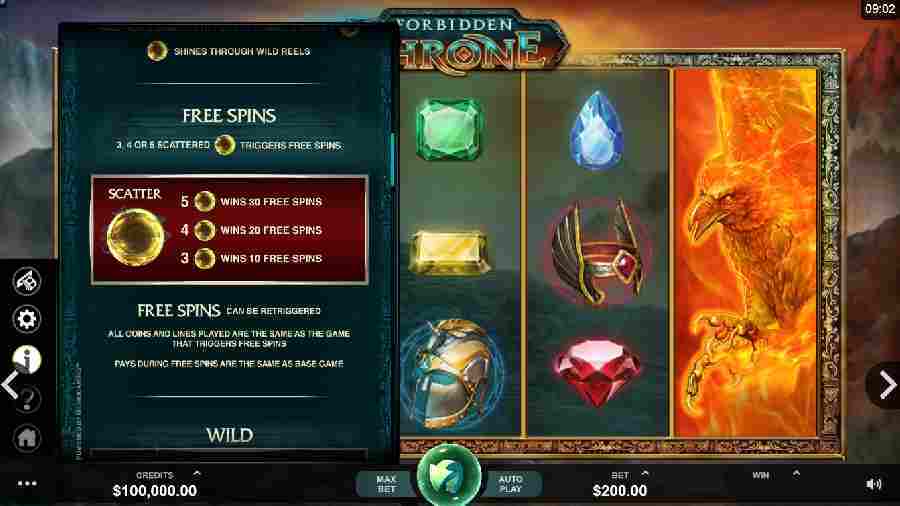 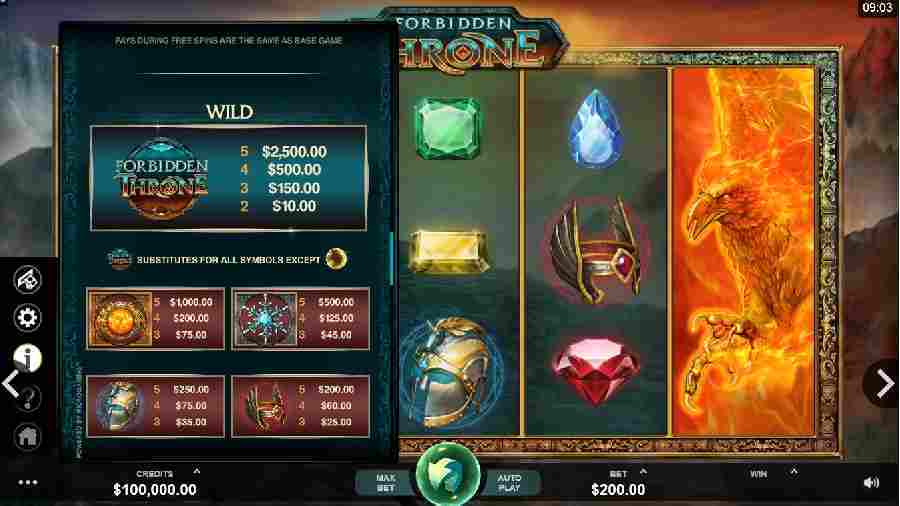 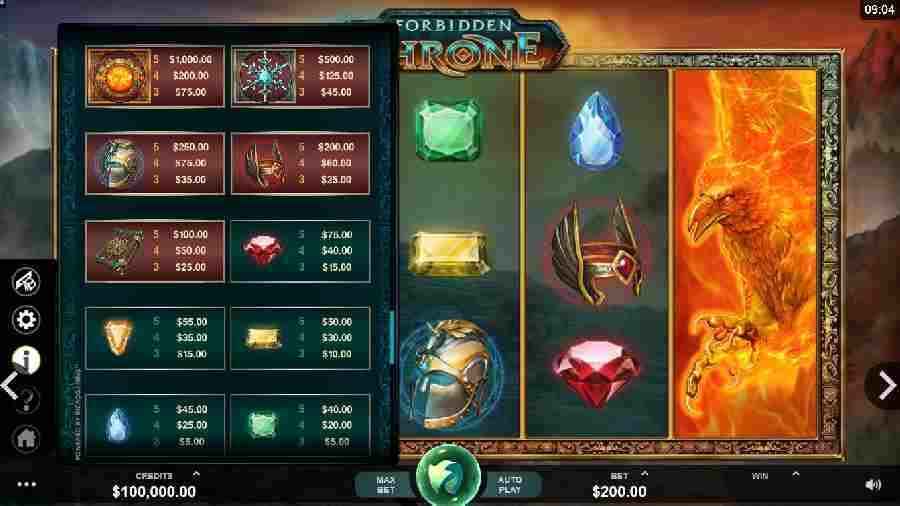 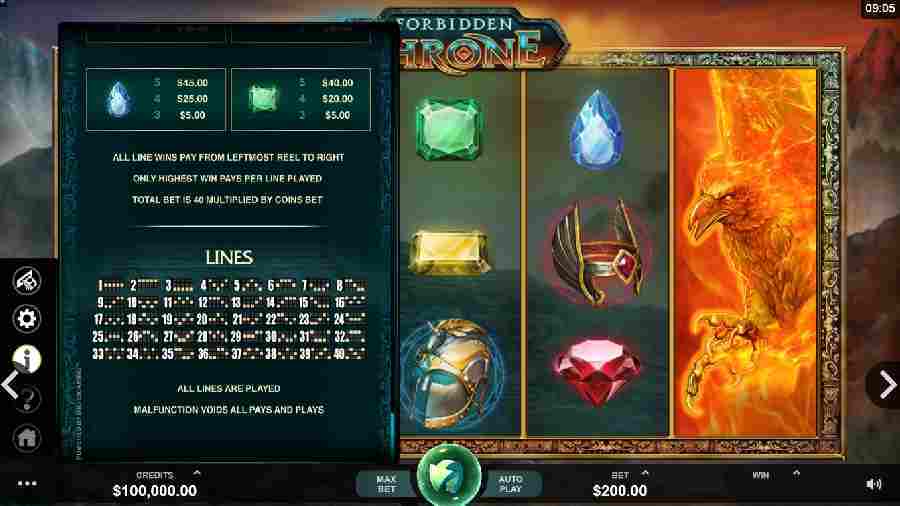