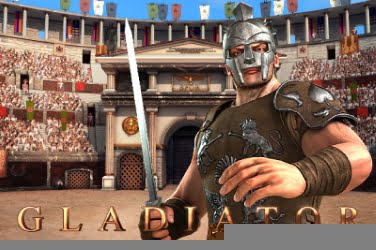 As you would expect from the name, Gladiator slots is set within Ancient Rome. Players can find the 5 reels of the game are enclosed within two marble columns which have a golden edging. There are also stone pedestals shown at the bottom of the screen, which along with the tunes and sound effects are in keeping with this offering from Betsoft.

The Gladiator slots game uses high quality graphics within its design and shows ornate decorations for players to enjoy. Also all the symbols are animated should they help to create a winning combination.

Players can find various symbols during the game of Gladiator slots. There is a Black Horse, a Bag of Gold Coins, a Tiger, a Shield and Spear, a Shield and Mace, a Golden Chalice, and a Flag.

Bonus Feature symbols include a Princess, the Colosseum itself, a Large Oak Door, and a Hero and Villain Gladiator. These all help players to be able to add to their winnings when they appear across the 5 reels of the Gladiator slots game.

The Princess symbol is used as a standard Wild in the game of Gladiator slots. This means it can alter other icons when it is found among the 5 reels to help create more winning combinations for the player.

However if the Princess icon is located anywhere on the top of the 3 rows that the Gladiator slots game has then it can add further bonuses to the jackpot amount. At this stage of the game the Princess will scatter petals onto the rows below to change the other symbols to additional Wilds. This can benefit the player significantly when they are aiming to increase their winnings.

A Scatter is a part of the Gladiator slots game and is shown with a Colosseum symbol. At this point in the game players are asked to selected from a row of stones to uncover a hidden prize. This could be a Multiplier, Free Spins, or Wilds and is completely random.

When a player is able to find 3 or more Large Oak Doors in the Gladiator slots game a “Click Me” Bonus Game is activated. Players can click on the doors which appear on the screen to receive various additional prizes. The round is only ended when the “Collect” image is revealed and all winnings are added to the winning jackpot amount.

An additional feature to the Gladiator slots game is when the Hero Gladiator symbol appears. Should it be found on the 3rd reel of the game then a Bonus Mini-Game is activated. This is when a Marble Slab takes over the center reel which the Gladiator then needs to smash through. Then an Expanding Wild will cover the reel to create further winning combinations.

There is also a Gladiator Battle Feature included in the Gladiator slots game. This becomes available should the player uncover the Hero and Villain Gladiator symbols alongside the Coliseum icon. These can be either on the 1st, 2nd and 3rd reels of the game, or the 2nd, 3rd and 4th.

During the Gladiator Battle Game the player needs to choose who they think will win the battle. There is a prize awarded whatever the outcome, however this will be higher if it is the player’s selected Gladiator who succeeds.

The range of coin sizes used in the Gladiator slots game begin at just $0.02, with maximum set at $1.00. With the opportunity of 25 winning paylines to take advantage of it leaves players with plenty of chances to add to the final jackpot amount which can be awarded.

Yet it is through the additional Bonus Features that are offered in Gladiator slots which help to increase a players winnings more substantially. These include the Princess Wild with its 2x Multiplier and the Colosseum Scatter.

Other Bonus Features are found with the Mini-Games that can be discovered in the Gladiator slots game. Players can enjoy a “Click Me” game when 3 or more Wooden Doors are revealed. Alternatively there is the “Gladiator Smash Wild” and the “Gladiator Battle” Mini-Games to add to the fun of this Betsoft online casino game.

It is possible to play the Gladiators slots game in Expert Mode. This means that players can set the reels to spin up to 99x automatically in Auto Play and be less interactive with the game.

Anyone who has enjoyed the film starring Russell Crowe of the same name can find fun with the Gladiator slots game. With a low betting range but 25 winning paylines and additional Bonus Features players of any level can find this online slots game appealing. 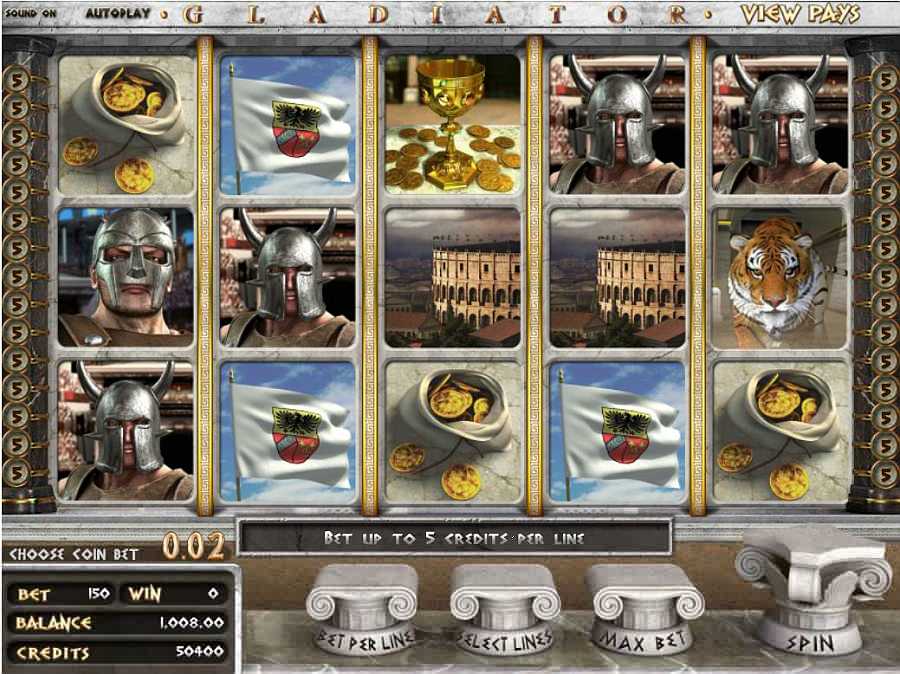 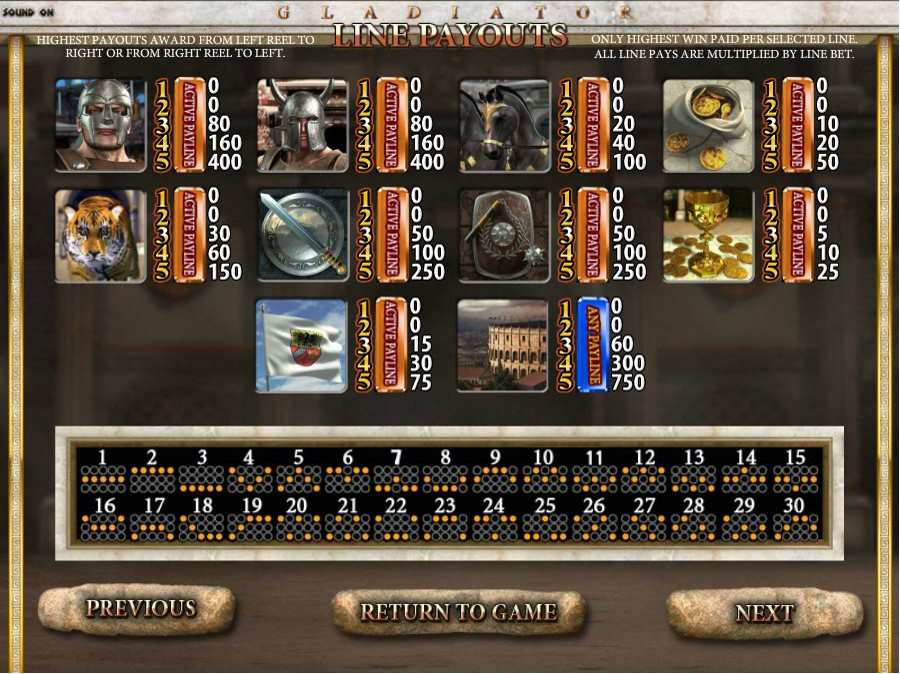 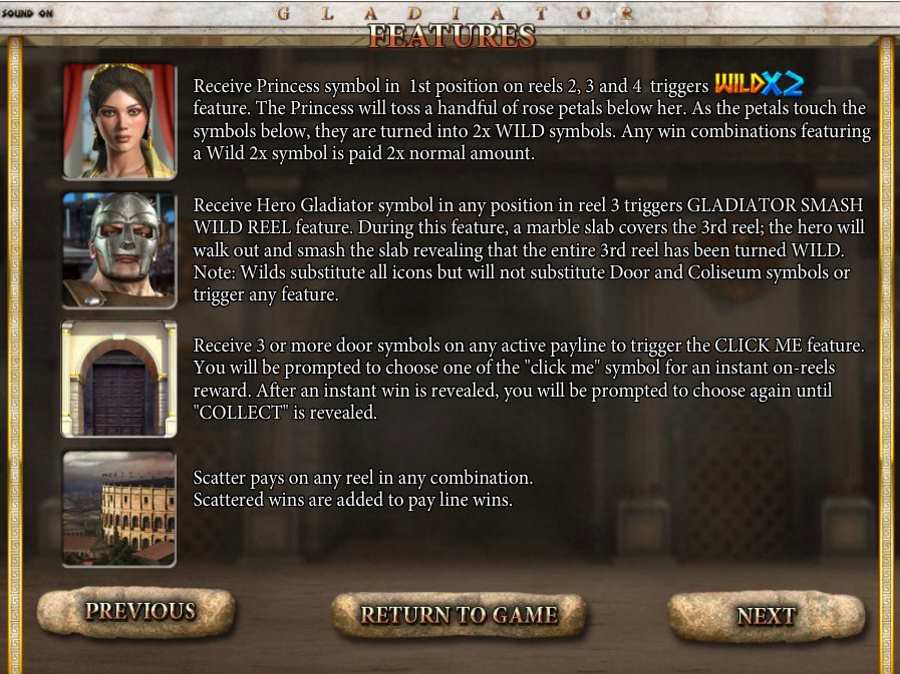 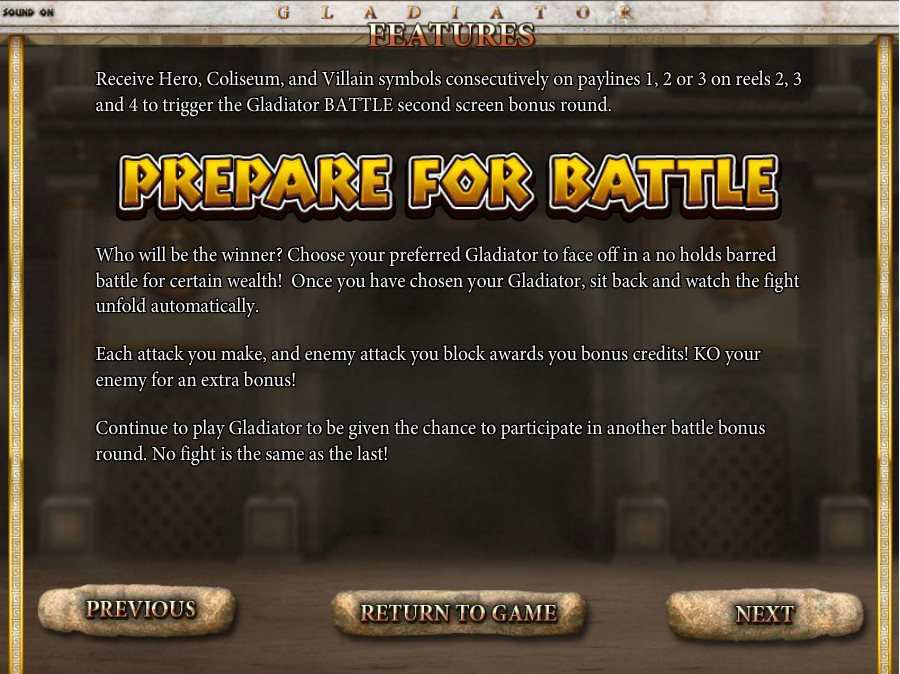 Gladiator is a non-progressive 5 reel 25 pay-line 3D video slot machine game from BetSoft, it has a Gladiator theme, and comes with a wild Symbol, scatter symbol, free spin and has a maximum jackpot win of $2000