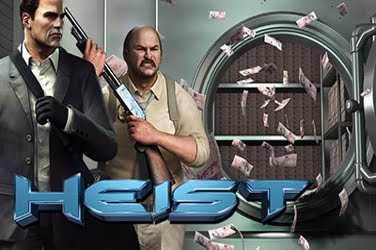 Heist slots is another creation from Betsoft which has an interesting storyline for players to enjoy. They will find the Thief Neil Quaylan as he tries to steal as much cash as possible before being found by Detective Albert Kowalksi who has been ordered to catch him and is hot on his tail.

The 5 reels of the Heist slots game are set within the screen of a security system, the controls of which are found at the bottom of the screen and used as the play buttons. High quality graphics and animations have been used in the design of the game, along with an appropriately themed soundtrack for players to enjoy.

As the main characters of Heist slots, Neil Quaylan and Detective Albert Kowalksi are used as symbols throughout the game. Players can also find Diamonds, the Plans to the Bank Vault, Coins, a Bag of Banknotes, a Pistol, the Keypad for the Vault Code and a Stopwatch.

Bonus symbols which can be located upon the reels of the Heist slots game include a Glass Cutter, C4 Explosives, a Drill, and the Bank Vault itself. Although there is no Wild icon, these additional symbols provide plenty of features to add to this Betsoft online casino game.

When 3 or more of the Glass Cutter symbols appear on the reels of the Heist slots game the player will be taken to a “Pick ‘Em” Bonus Round. Here they have 3 chances to choose an icon which will reveal a random prize. This could be either Free Spins, a Cash Prize, or the chance to play one of the other Bonus Rounds that are available.

The Drill symbol can also be used by players to aid in increasing their winnings. Should 3 or more be found after the reels have been spun then a random cash amount is awarded to the player. The amount given will depend on the initial wager placed but ranges from 150 to 750 coins which are then added to the winning figure.

A C4 Explosives symbol is the closest that players will get to a Wild in the Heist slots game. It is required to appear on the 2nd row and 3rd reel of the game to activate this Bonus Feature. At this point the reel will expand to become filled with Wilds which can create more winning combinations for the player to take advantage of.

There is also the chance that the expanding Wild reel will become frozen in place. Although this occurs randomly and only for the next spin, it can still help the player to increase their winnings even further.

The Vault symbol is used in Heist slots to activate the Mini-Game. This occurs when 3 or more are located across the 5 reels and will show the player a second screen. Here they must navigate Neil Quaylan through the security system, using various methods to try and break through into the Banks Vault without being caught by Detective Albert Kowalski who is chasing him.

( This game is offered in mobile and tablet version ) Coin sizes used in the Heist slots game are of a low denomination. They range from $0.02 to just $1.00 with a maximum of 5 coins allowed on each of the 30 winning paylines that the game has to offer. This makes the game popular with both high and low rollers from around the globe who enjoy online casinos.

Once the 5 reels of the Heist slots game are spun players can watch in the hope of creating a winning combination to be added to their jackpot amount. To increase their chances even further players can take advantage of the 4 Bonus Features that Heist slots provides.

Players can find Free Spins, an Expanding Wild, Multipliers and a Mini-Game included in Heist slots. All of these can be activated at any time during game play to further the pay-out figure which will be awarded to the player of this Betsoft online casino game.

There is also the opportunity to play the Heist slots game in Expert Mode. Players will be able to alter the sound levels of the game and the speed which the reels spin. Also there is Auto-Play available in this mode of play. This means the players can set the reels to spin automatically either a certain amount of times or until the maximum wagered figure is reached.

Betsoft have released Heist slots to be included in their online casinos and is proving popular with gamers of all levels from around the globe. 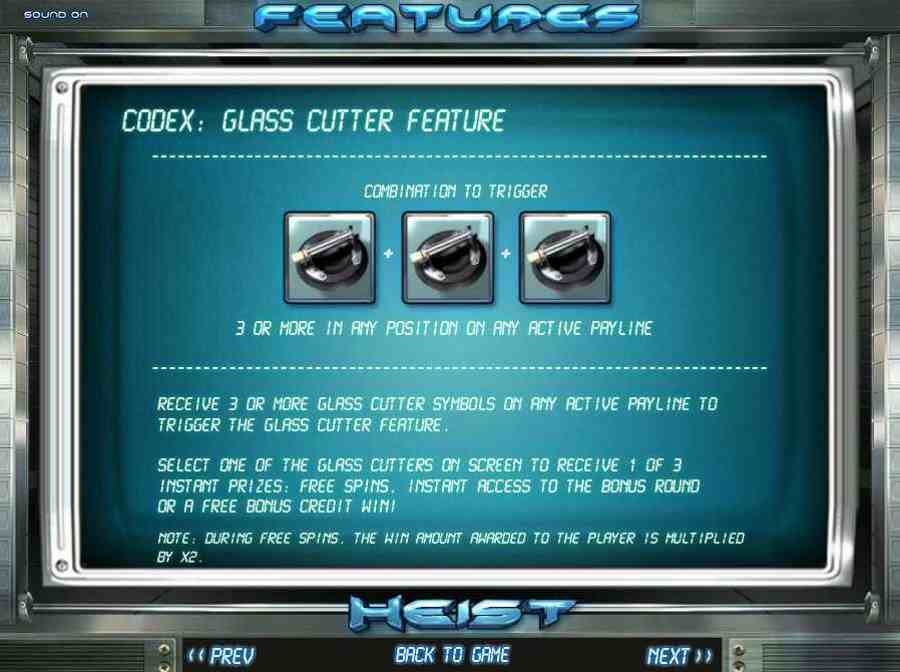 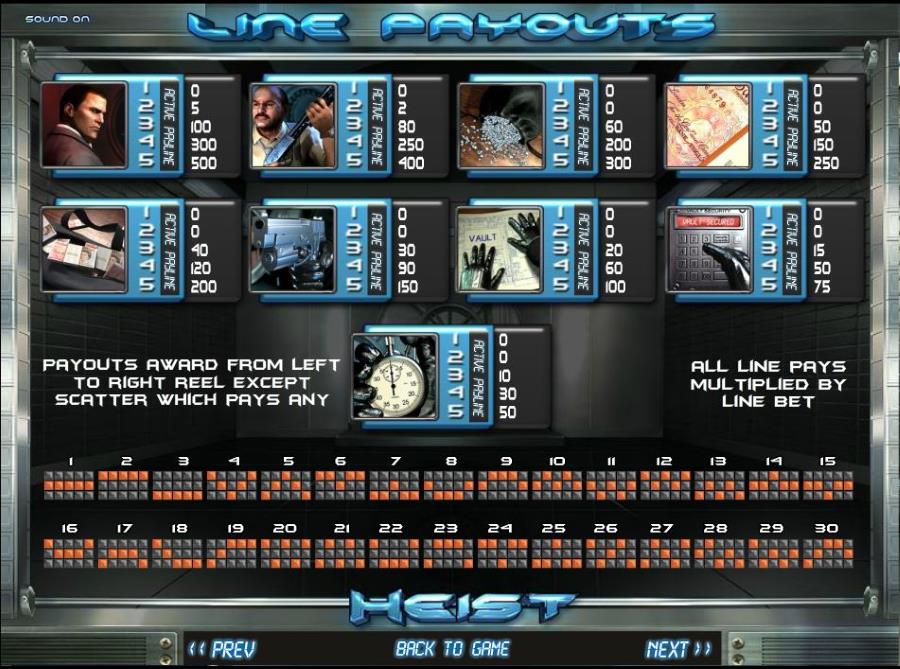 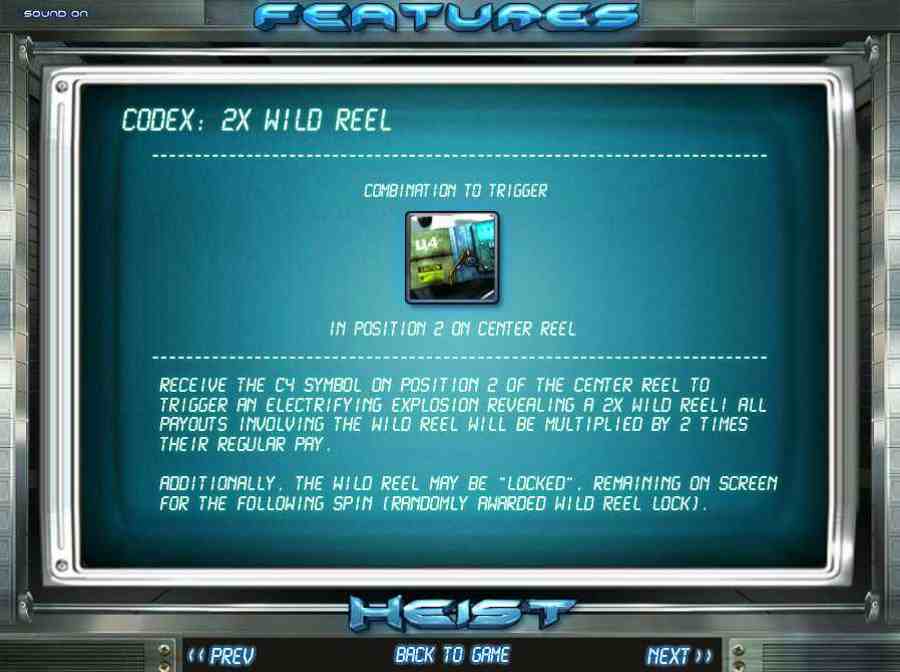 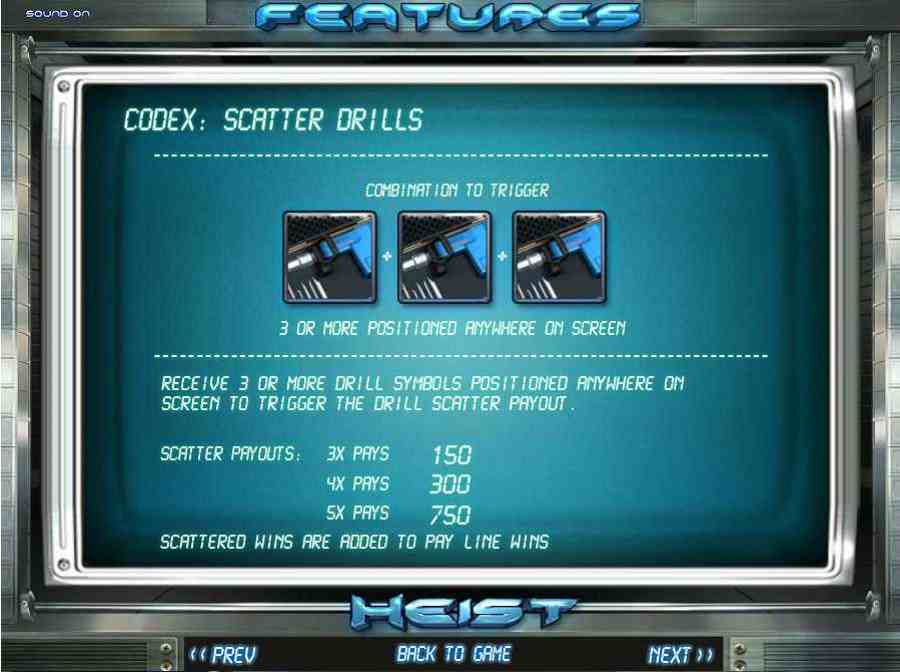 Heist is a non-progressive 5 reel 30 payline 3D video slot machine game from BetSoft, it has a Heist theme, and comes with a wild Symbol, scatter symbol, Multiplier, free spin and has a maximum jackpot win of $2500