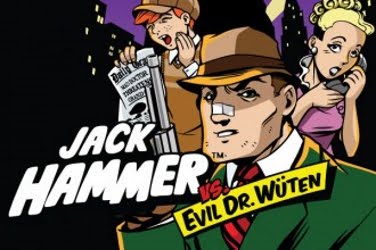 Net Entertainment have created this slots game to be added to their Jack Hammer series. It has the same Comic Strip theme as their earlier release, Jack Hammer – Fishy Business. The Jack Hammer vs Dr Wuten slots game became available in 2010 and can now be played on any Mobile device.

Jack Hammer is a Private Eye who is trying to stop the evil Dr from poisoning the city. Kidnapping women and sending bombs filled with the deadly liquid. Players can join him on his mission to save them in this 5 reel slots game which boasts 25 winning paylines.

The reels of the game are shown as if a page of a Comic Strip. All the graphics are bold and bright colors have been used in its design. In the background players can view a city skyline beneath a darkened night sky.

To add to the atmosphere of the game, designers have also included some gumshoe-style music which can be enjoyed during play.

All of the symbols used in this online casino game are related to the two main characters, the hero Jack Hammer and the evil Dr Wuten. Included along with themselves players will find a Female Victim, a Newspaper Boy, a Getaway Car, a Blimp, a Vile of Orange Liquid, a Newspaper, and a Ringing Phone.

The word “Wild” can explode onto any of the 5 reels of this slots game at random. It is the main feature when they are activated in a winning combination as they then become Sticky Wilds which can help to create 1 of the 25 paylines.

At this point in the game all the symbols used in the payline will remain in place and 1x Free Spin is awarded to the player. This can prove to increase the initial wager placed substantially as this Bonus Feature will continue until a winning combination is not revealed.

Dr Wutens Ticking Bomb is the Scatter symbol. Although it does provide players with a Free Spins Bonus Round it can only be activated when at least 5 of them appear on the screen.

The amount of Free Spins awarded at this stage depends on the amount of Scatters which were spun. Should a player reveal 5x Scatters they can expect to receive 10x Free Spins. This increases to 15x, 20x, 25x, and 30x if there were 6, 7, 8, 9 Scatter’s respectively.

Any winnings during the Free Spins Bonus Round are also awarded with a 3x Multiplier. Something that provides a further chance for players to increase their final pay-out balance in the Jack Hammers vs Dr Wuten slots game.

All of the 25 winning paylines have to be in play during this particular online slots offering. However the coin sizes have been kept low and players can place as little as $0.25 on each spin. Which makes it popular with beginners and those who prefer not to wager large amounts.

Yet high rollers are able to wager up to 10x of a maximum coin of $1.00 on each payline. Meaning that the maximum wager is $250 on each spin of the reels for those players who wish to get the highest return. Therefore this Detective themed game is proving appealing to players of all levels from around the globe.

This online casino game can provide players with numerous ways for them to increase their winnings. Not only with the Sticky Wilds, but also the 1x Free Spin which is given each time a payline is revealed.

In addition to this is the Free Spins Bonus Round which is activated with the Ticking Bomb Scatter symbol. With this Feature players can take advantage of up to 30x Free Spins, with all winnings benefiting from a 3x Multiplier.

Net Entertainment have also incorporated an Auto Play Feature in this slots game. This means that players are able to be less interactive with the games software. Allowing them to set the reels to spin while they are busy doing other things, with the chance of returning to a large cash pay-out figure.

There are plenty of thrills to be found in the Jack Hammers vs Dr Wuten slots game. All ensuring that players are kept entertained while watching the 5 reels spin. Many returning to follow the tale of this Private Detective chasing his villain as their jackpot balance increases during play. 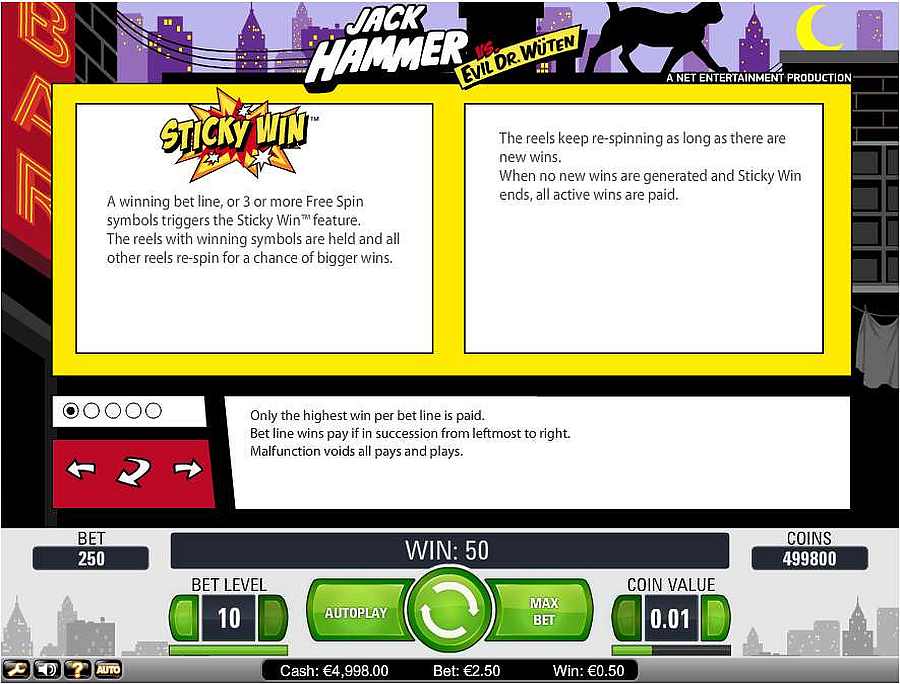 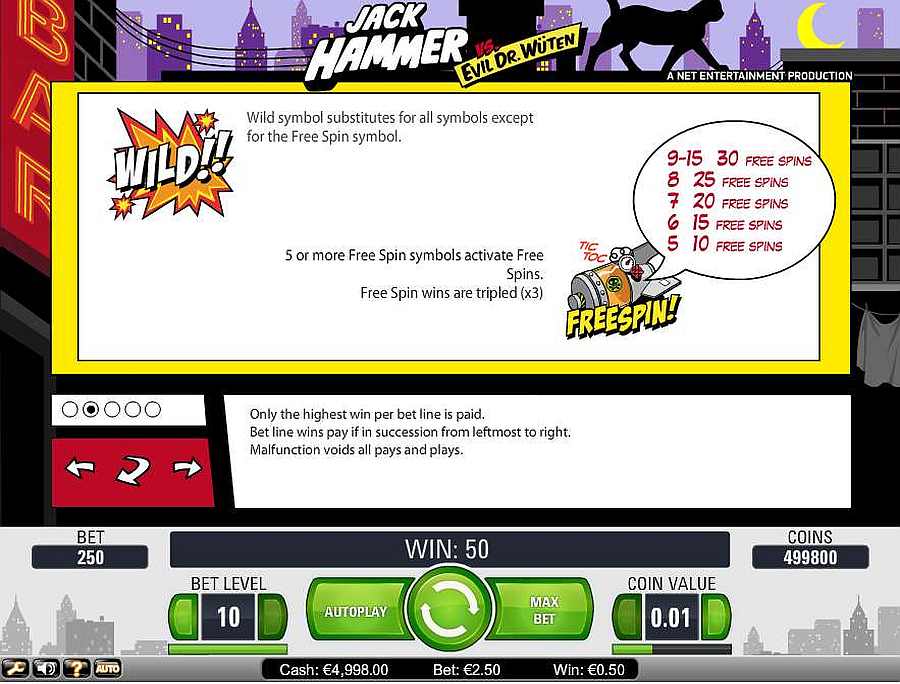 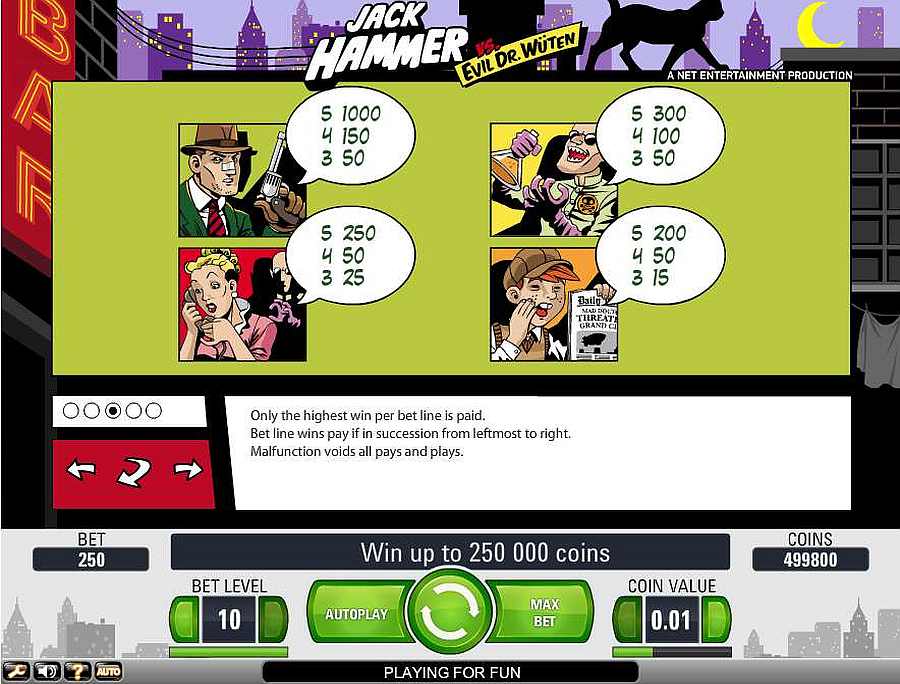 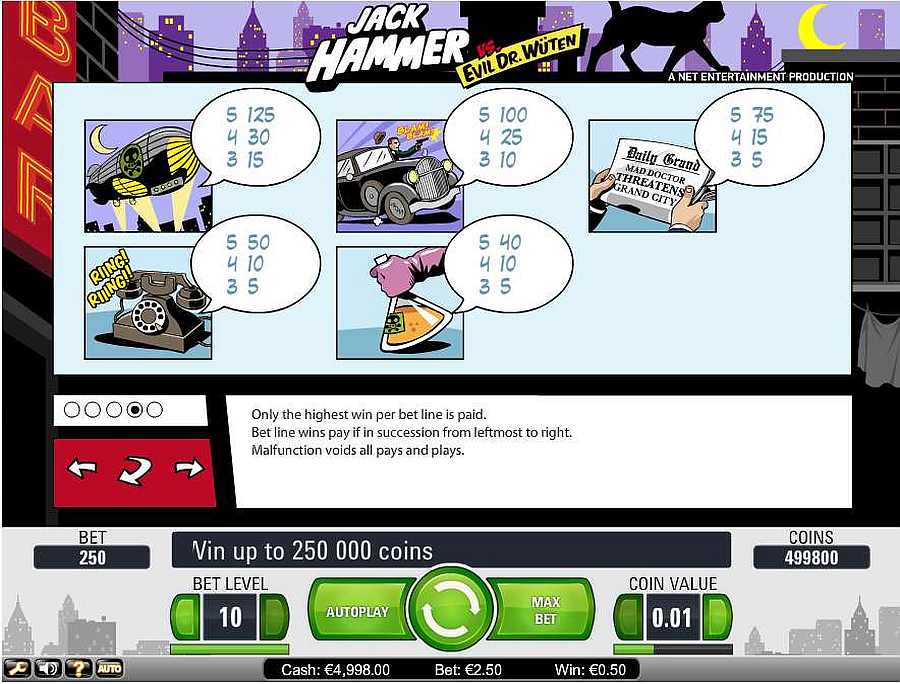 Jack Hammer Vs Evil Dr Wuten is a non-progressiv, 25-line, 3 row video slot machine using 15 independent reels from net entertainment Software provider, it has a Private Eye theme, and comes with a Scatter symbol, free spins, and has a maximum jackpot win of 250000 coins