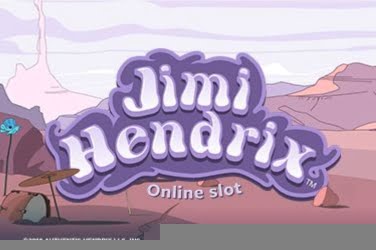 As the name would suggest, this online casino game is based on the rock legend that is Jimi Hendrix. Net Entertainment have created a 5 reel game with 20 winning paylines which has a psychedelic feel. Not only can players view images of Jimi Hendrix himself during the game, but also enjoy tracks from his albums.

Players will find the reels of the Jimi Hendrix slots game set upon a dreamy desert scene. To the right is a white guitar, while there is a drum kit to the left. Although the graphics are rather basic, they do remain in keeping with the Woodstock and Flower Power feel which has been created.

Released in April 2016, the Jimi Hendrix slots game can be played on mobiles as well as a laptop or tablet. This allows players more opportunities to benefit from all the features that this Net Entertainment online casino game has to offer.

Various symbols have been used in the making of the Jimi Hendrix slots game. There is a Brown Eye, a Yellow Peace Symbol, a Red Heart, a Blue Flower, a Vinyl Record, a Musical Note and a White Guitar.

The symbols which provide the lowest pay out amounts range from 10 through to Ace as is the case in many online casino games. However the symbols have been given a funky look to complement the Rock Theme of the Jimi Hendrix slots game.

Jimi himself is the Wild symbol used in the game and can change symbols other than the various Scatters that are found during play. This can help players to create more winning combinations to be included in their jackpot amount.

If the player is lucky enough to reveal 5 Wild symbols during a spin then they will be awarded with the highest jackpot figure that the game offers. In the Jimi Hendrix slots game this is 400x the player’s stake which can generate quite a pay out if they are wagering the maximum amount.

A Red Guitar provides players with a Re-spin Feature when 4 or more of this symbol is located in Jimi Hendrix slots. When they appear they will remain on the reels for the next spin and if another is found the round will continue. All winnings during this point in the game are then evaluated and added to the final pay out amount.

There is a Pick and Click Feature included in the Jimi Hendrix slots game. This is activated when players reveal 3 or more of the Scatter symbol in the game. Players will see Jimi holding a White Guitar on the 3rd, 4th and 5th reel of the game for this part of the game to begin.

Next players can click on various Loudspeakers to reveal one of four prize symbols. When 3 of the same have been collected the player can choose an additional Bonus Feature.

One of the Bonus Features found in the Jimi Hendrix slots game is the Coin Win. If players select this option they will receive from 8x to 30x their total stake when they claim their pay out amount at the end of the game.

The Crosstown Traffic Bonus awards players with 6x Free Spins along with a random Wild appearing on each reel in turn beginning on the 5th. With this variant this Feature in Jimi Hendrix slots offers players with lots of opportunities to add to their winnings.

For the Little Wing Bonus Round players can take advantage of a random amount of Free Spins ranging from 6x to 12x. During this round players will also find 3 to 5 overlaying Wilds upon the reels to increase their chances of winning even higher.

A Scatter showing Jimi and his Guitar with a Purple background activates the Purple Haze Bonus. Again they will award players with 6x to 12x Free Spins, but there is an added twist during this Bonus Round.

While playing in the Purple Haze Bonus Round all the 10 through to Ace symbols will become Wild. This particular Feature can also be activated should the Purple Haze symbol appear on the 1st reel during the game of Jimi Hendrix slots.

The coin denomination in the Jimi Hendrix slots game has been kept low to make this particular offering appealing to players of all levels. This provides a betting range of just $0.20 to $200 if all 20 winning paylines are in play at the maximum amount.

Any fans of rock can enjoy this creation from Net Entertainment even though the graphics are rather basic. Players can hear amazing tracks such as Crosstown Traffic, Purple Haze and Little Wing during Jimi Hendrix slots. And these titles have been used as symbols and Bonus Features in the game.

There is a lot on offer in the Jimi Hendrix slots game with Wilds, Scatters and 3 different Free Spin Bonus Rounds. All providing players plenty of fun while they enjoy this online slots game.

Jimi Hendrix is a non-progressive 5 reel 20 paylines video slots game from net entertainment, it has a rock legend theme, and features a wild symbol, scatter symbol, free spins and has a maximum jackpot win of 4000 coins