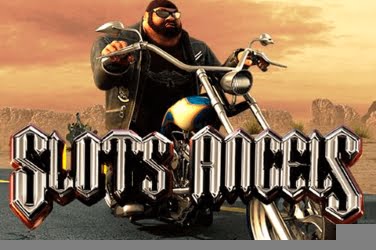 The Slots Angels slots game has 5 reels and 30 winning combinations for players to take advantage of. This release from Betsoft has a theme based upon Motorbike Gangs and the scene showed is in the clubhouse parking lot.

Players can find the 5 reels set within a metal backdrop which has chrome exhaust pipes on each side, and a skull upon the top. There is a cloudy sunset sky at the top of the screen, and a biker to the right.

All the graphics used in the Slots Angels slots game are in 3D and are of high quality. This is also the case with the symbols which the designers have used which are all in keeping with the theme.

The symbols that players can find across the reels of the Slots Angels slots include 3 different Biker characters. There is also a “Bar” symbol, some Motorbikes, a Lighter, some Pool Balls and a Wad of Cash.

Bonus symbols which are used in the Slots Angels slots game include Bottles of Alcohol and a Dartboard.

The main feature which has been incorporated into the Slots Angels slots game is that whenever a player creates a winning combination they are given a Free Spin with a 1x Multiplier on the initial amount wagered.

This Bonus Round will continue and the Multiplier increases up to 5x until a spin is lost. However, this feature can be reactivated at any time during gameplay of Slots Angel’s slots.

Although there is no specific Wild symbol included in Slots Angel’s slots there is a Wild reel feature included in the game. This is available when the Party Free Spins Bonus Feature is activated.

When the player reveals 3 or more Bottles of Alcohol symbols on the 1st, 2nd, 4th or 5th reels of the game they will be awarded 10 Free Spins. During this Bonus Round, the 3rd reel will become Wild to give the player more opportunities to create a winning combination.

There is a Pick Em Bonus Feature also included in the Slot Angel slots game which can be found with the Dartboard symbol. If the Dartboard icon appears on the 1st, 2nd, and 5th reel then the player can choose one to reveal an additional cash prize to be included in their final payout figure.

A Biker with a black beard is the symbol who activates the Slots Angels slots Mini-Game. This is a Biker Race in which the player chooses which Biker character they think will win. The prize they receive at the end of this Bonus Round will depend on the position in which the players Biker finished, and their performance over the course of the Race.

The Biker with the black beard is also how players can claim the Progressive Jackpot which is on offer in the Slots Angels slots game. Should they be lucky enough to reveal 5 of these symbols across the reels of the game then the jackpot figure shown at the top of the screen will be awarded to the player.

Low rollers can enjoy the game of Slots Angel’s slots as the coin denomination has been kept restricted to the range from $0.02 to just $1.00. There is also a limit of a 5 coin maximum upon each payline. However with the games 30 winning combinations and a Progressive Jackpot on offer this Betsoft online casino game is also appealing to high rollers.

Some players may be disappointed that there is no Wild symbol in the Slots Angels slots game. However, there are plenty of other Bonus Features which allow players to increase their final payout amount.

Slots Angel’s slots boast Free Spins which include an increasing Multiplier. Then there is a Pick Em Bonus Feature and a Mini-Game to be enjoyed. All of these add to the thrill for those who like to take part in Betsoft online casino games.

There is the option to play the Slots Angels slots game in Expert Mode. This allows players with the opportunity to set the game to Auto-Play. Here the reels will spin automatically giving players the freedom to be less interactive with the software with the hope of returning to a high jackpot payout to claim.

Any players who like the Motorbike Gang theme which is used in this Betsoft online casino can benefit from all that is has to offer. Players of any level can enjoy the Slots Angels slots game while seeing their final payout amount rise. 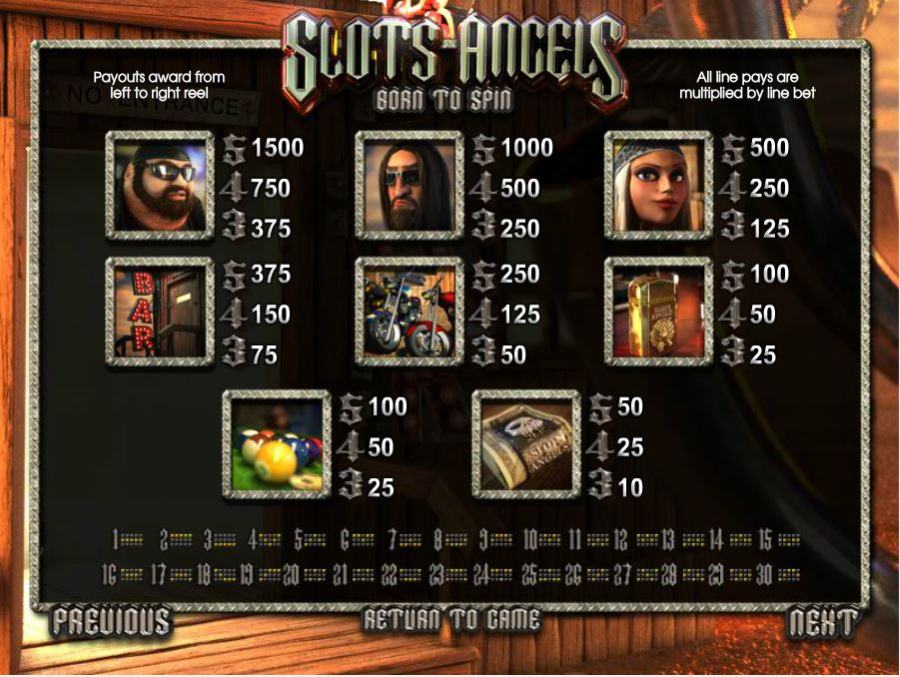 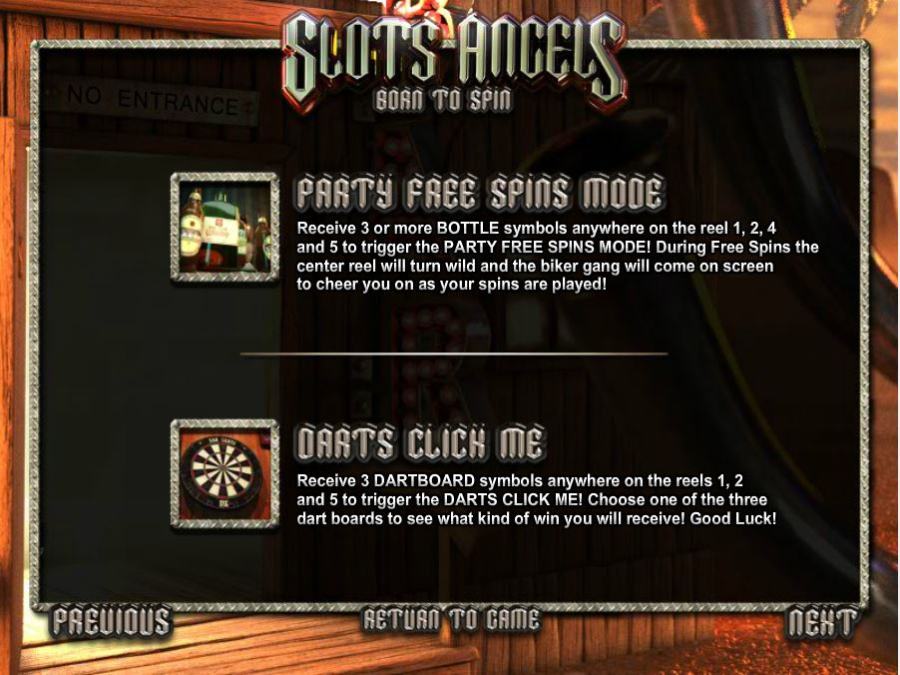 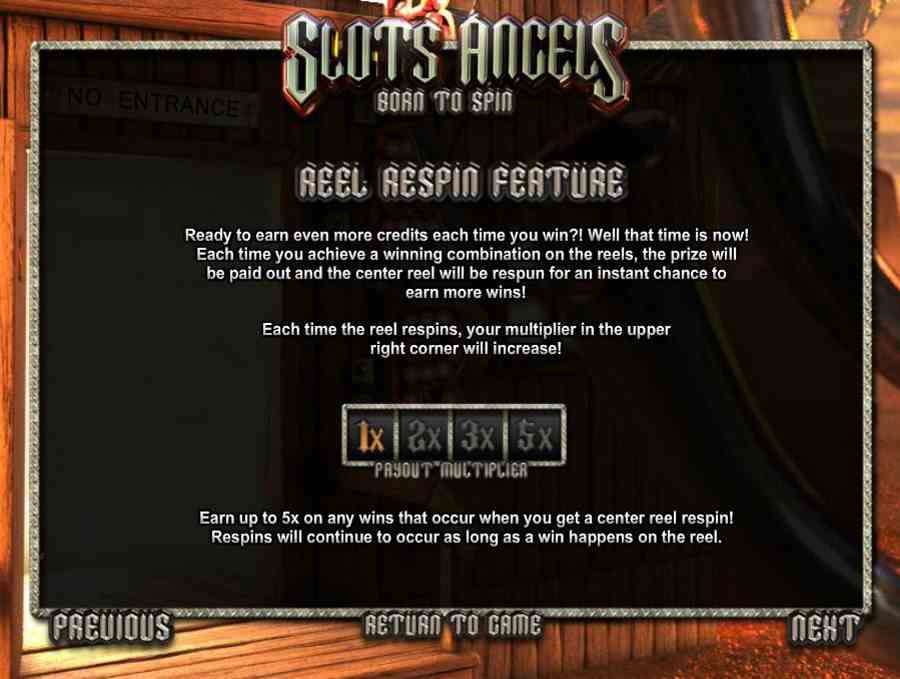 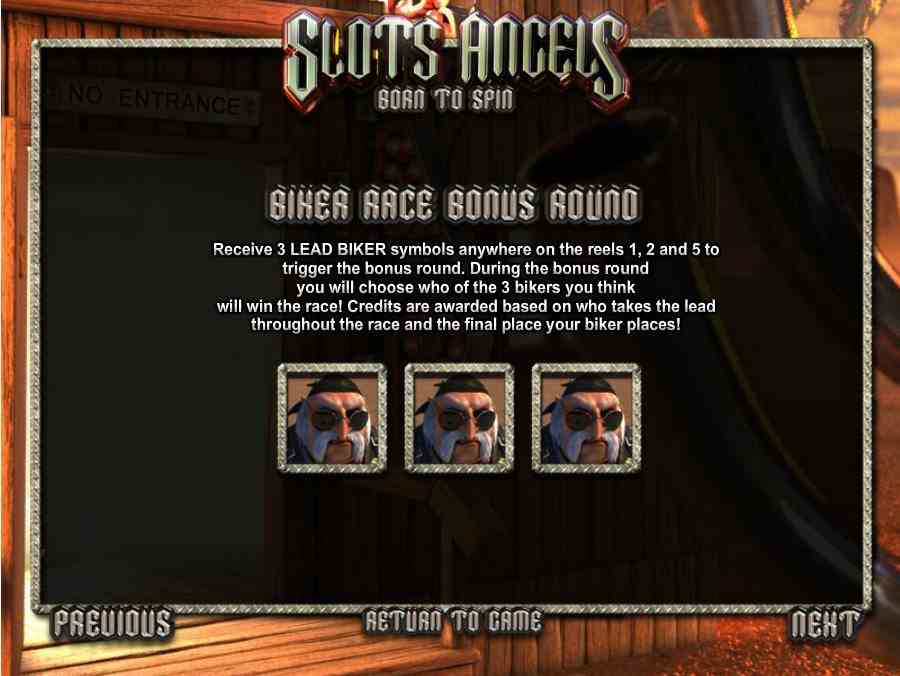 Slots Angels is a progressive 5 reel 30 pay-line video slot machine game from betsoft, it has a Motorbike Gangs theme, and comes with a wild symbol, scatters symbol, multiplier, free spins and has a maximum jackpot win of $3750