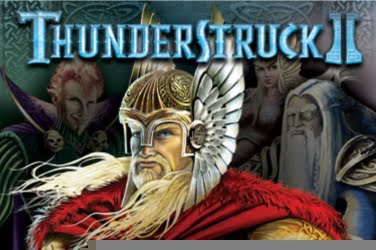 Recently the microgaming software giant has launched an amazing slot game known as Thunderstruck II. The above game has 5 reels and provides 243 ways for the players to win on the online slot. The game was officially launched on 2010 which is a sequel of the popular “Thunderstruck” slot game.

The game starts with an amazing lightening and thundering sound. The graphics of the Thunderstruck II provides an amazing experience to the players of the game. The game will provide the players with various divine powers and introduce them to some of the gods and goddesses.

The Thunderstruck II slot game will be more appealing to the players of online casinos as it has more amounts of features than its previous version. It also gives an opportunity for the valued players to win an amount of $121,500.

The interface of the above game is user-friendly, sleek and bright. The reels of the game will provide high definition images of Loki, Thor, Valkyrie and Odin. One of the special characteristics of the slot game is the use of wild and scatter symbols. Use the above feature of the game to form winning combination. Start playing the above game by using the divine powers of gods and goddesses.

Thunderstruck 2, the makeover of the popular slot game Thunderstruck has lots of excitement and adventure. Based on the innovative 5 reel, 243 ways to win concept it gives the players a chance to win over 2,430,000 coins. Below are discussed some of the features of the above game which will surely make you crazy.

Besides the randomly activated bonus feature where some of the reels get transformed into wilds reels magically, the above game also has four individual bonus levels. The above bonus levels are allowed to access when the Great hall of spins is activated several times. The rewards for the above bonus may vary from rolling reels, bet multipliers, wild reels, wild symbols and also up to 25 free spins.

The above game also has an extra bonus feature termed as “Wild storm” on the top of the “Hall of spins”. You will be able to face the above feature on all of the normal levels of the game. It may also occasionally turn on to all the 5 reels of the game and give you a chance to win the jackpot.

The above slot game is surely a well designed game with various features and lots of magical moments. You can play the above game with either real cash or on a free mode.

( Now available on mobile version ) Thunderstruck 2 which is one of the most popular games of recent times is brought to you by microgaming software firm. The above game is much bigger in pay lines, features and designs in compare to its predecessor “Thunderstruck” slot game. Below have been discussed the rules of playing the above game online.

The Thunderstruck 2 slot game is played using 5 reels and it gives the players 243 ways to win on the slot machine. The above game permits its players to set a series of coin values which ranges from $0.01 to $0.05. According to the rule of the game, a single player can only with maximum 10 coins for an individual spin.

The above slot machine has minimum wager of $0.03 per spin and a maximum wager of 415 per spin. The pay lines on a specific level of the game cannot be changed on the slot machine. The high playing cards of the above slot game have the smallest pay outs. Among all the icons, the Valhalla, longboat and 4 of the Norse gods are the highest paying icons. Each of the four Norse gods also have special free spin bonus.

Playing the Thunderstruck 2 slot game will enable the players to win up to 2,400,000 coins which can surely change someone’s life.

Thunderstruck 2 is a non-progressive 5 reel 243 ways pay-line video slot machine game from microgaming, it has a Norse God of Thunder theme, and comes with a wild symbol, scatter symbol, multiplier, free spins and has a maximum jackpot win of $500