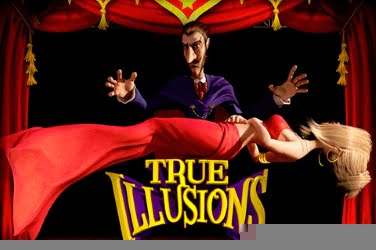 There is a Magic theme to the True Illusions slots game. The players will find a Magician and his beautiful Female Assistant across the 5 reels of the game. They, along with other appropriate symbols, helping to create more of the 30 winning paylines available.

The 5 reels are framed in purple and set in the center of a stage. Red curtains with gold swashes and tassels surrounding them. The Magician can be seen to the left of the screen, 3D animated and producing a bunch of flowers at random throughout the game of True Illusions slots.

Another fun animation which is included in the True Illusions slots game is activated with each winning combination created. Then the players will see the Magician appear upon the reels to perform a random Magic trick. Players can view anything from him doing a card trick, to pulling a rabbit from his hat. This all adds to the appeal of this release from Betsoft online casinos.

Players of any level can enjoy the fun found in True Illusions slots. It is an engaging and entertaining slots game which has been created by Betsoft to be included in various online casinos.

All the symbols used in the True Illusions slots game are in keeping with the Magic theme. Players will find the Female Assistant, a Top Hat, a Dove, a Crystal Ball, a Locked Chest, and a Guillotine.

However, it is when the Magician appears that players can benefit the most as this is the Scatter symbol in the True Illusions slots game. Should 3 or more of these help to create a winning combination all the symbols will disappear from the screen. This cascading reel effect then allows other symbols to fall into the empty spaces with the chance of creating further winning paylines.

A blue and gold “Wild” is used as a Bonus symbol in the True Illusions slots game. When they appear anywhere across the screen they can change symbols other than those which activate a Bonus Feature.

In addition to this, the Wild symbol is stacked upon the 3rd reel of this Betsoft online casino game. Should the 3 rows of the True Illusions slots game become filled with Wild symbols then the Free Spins Bonus Round will be activated.

During the Free Spins Bonus Round, the 3rd Wild reel will become frozen throughout. This provides players with even more opportunities to add to their final winning amount.

There is a Mini-Game included in True Illusions slots. It can be activated when 3 or more of the Playing Cards symbol are found during a spin. Then the players are asked to choose one of the symbols in a “Pick “Em” style game. Each door hides a random cash prize to be included in the jackpot balance.

Although there is no Progressive Jackpot or Gamble Feature, the other numerous Bonus Features give players various chances to increase their winnings.

The first thing that players of the True Illusions slots game must do is to decide how much to wager. This can range between 0.02 and 0.50 and there is a set limit of 5 coins on each of the 30 winning paylines that are available.

This factor may mean that some high rollers may find the True Illusions slots game unappealing. Yet even though the game only provides small payout amounts, they occur frequently during play. So there are numerous chances for players to maximize their initial wager in this particular online slots game.

Players can benefit from a Wild, Scatter, Free Spins, Cascading Reels, and a Mini-Game during the game of True Illusions slots. All these Bonus Features allow opportunities for coins to be included in the cashout balance which the player can claim at the end of the game.

Betsoft designers have also included an AutoPlay feature in True Illusions slots. Once this option is selected players can opt to set the reels to spin for a certain amount of rounds or until the balance reaches zero.

Even so, with all the fun animations that players can enjoy in the True Illusions slots game there is plenty to remain entertained while watching the 5 reels spin. 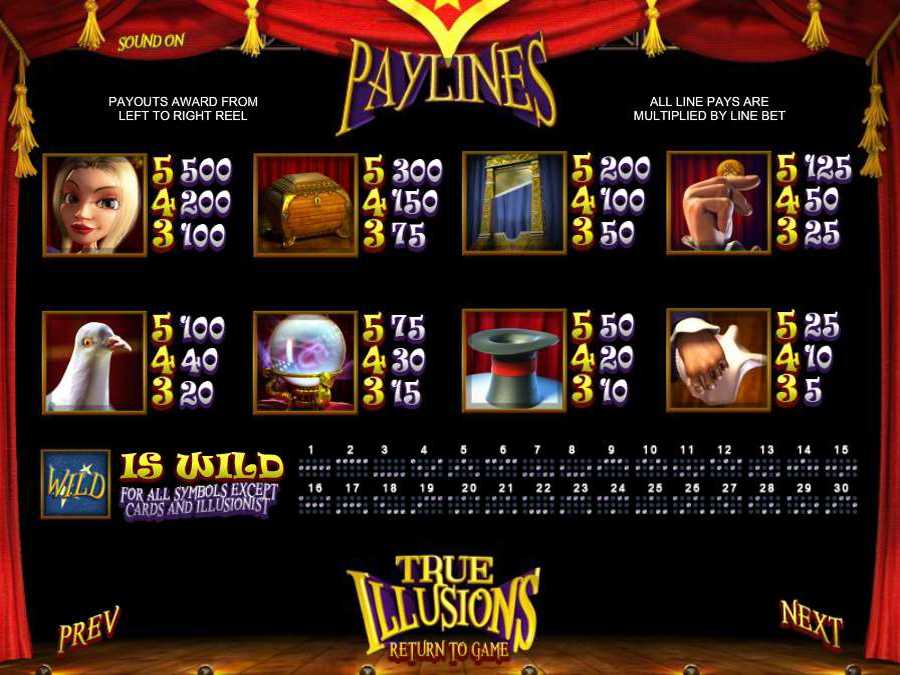 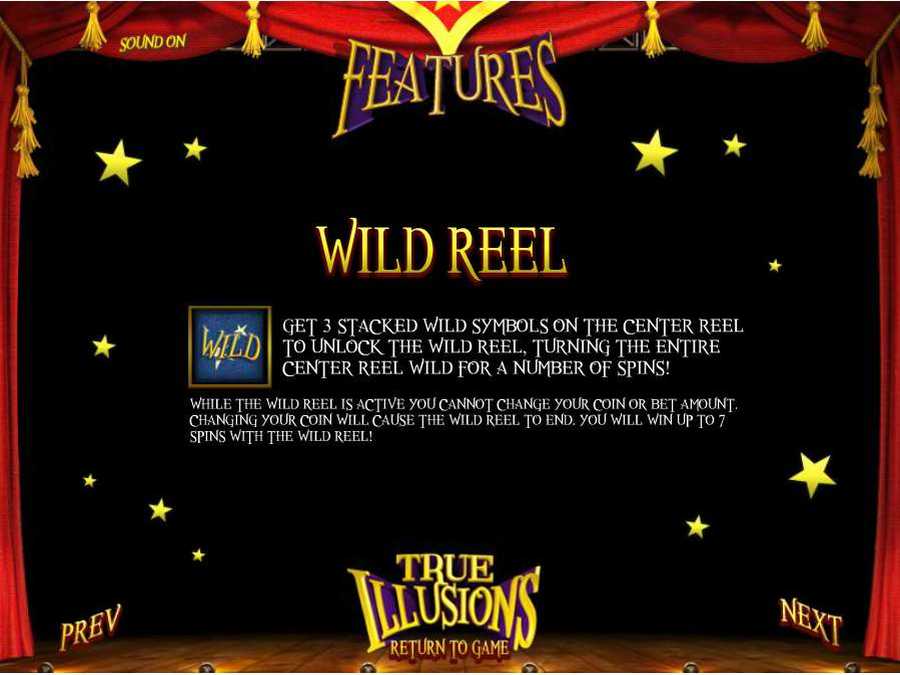 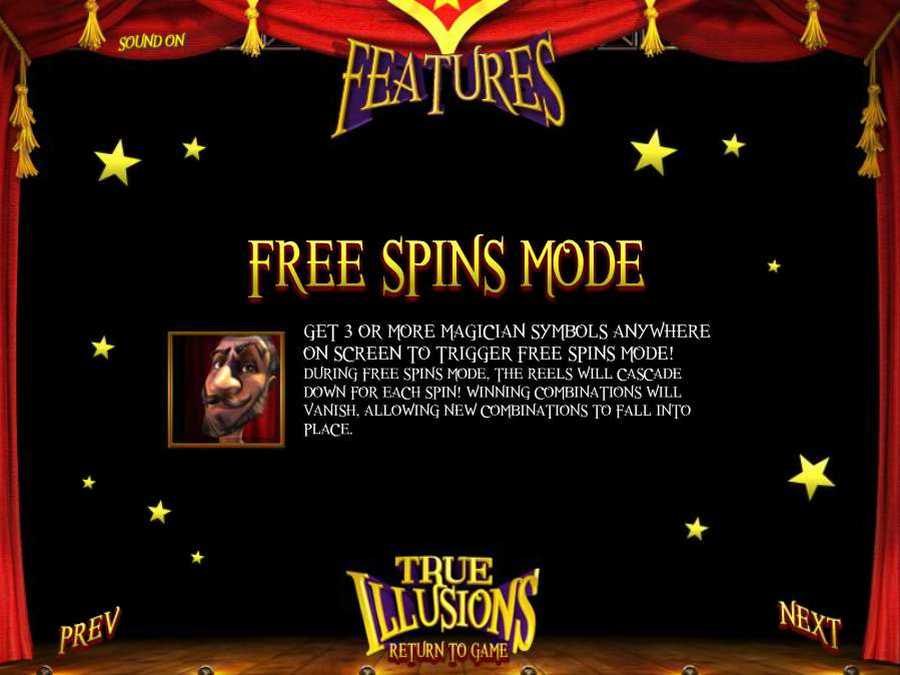 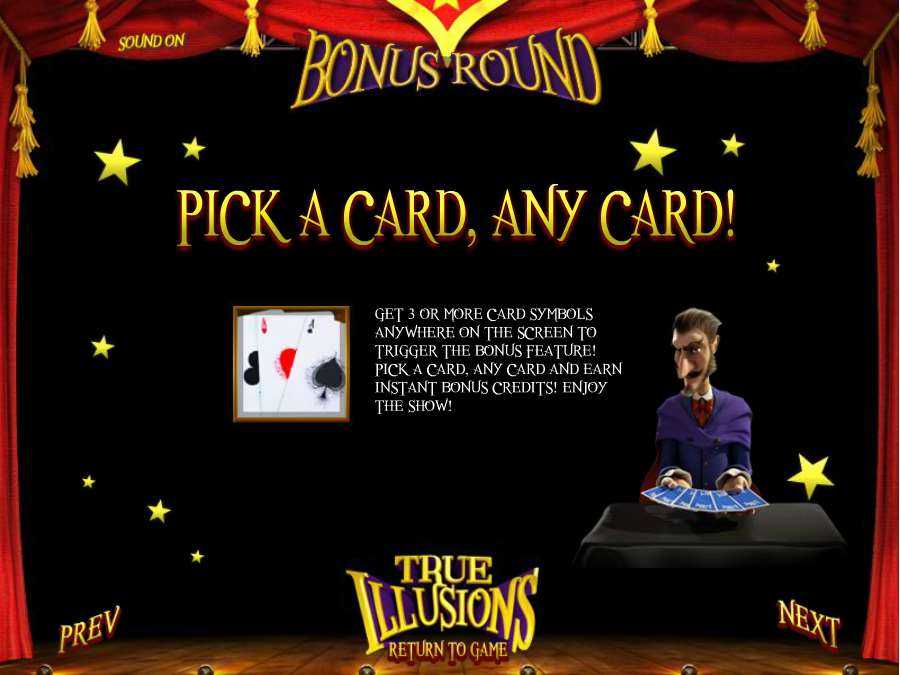 True Illusions is a non-progressive 5 reel 30 pay line 3D video slots machine game from BetSoft, It has a magical theme, and comes with a scatter symbol wild symbol, free spins and has a maximum jackpot win of $3750